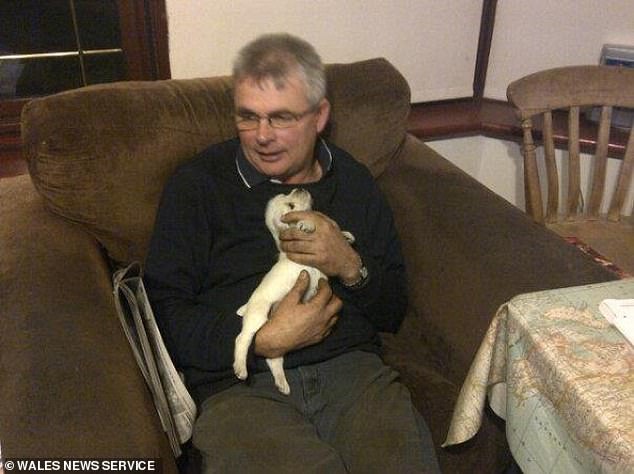 Care home boss, 61, killed himself with shotgun in police HQ car park while struggling to cope with seeing his residents suffering in the pandemic

A care home boss shot himself dead in a police car park after struggling to cope with the pandemic and fearing he would spread Covid-19 to his elderly residents, an inquest heard today.

Father-of-four Vernon Hough, 61, was found fatally insured at a police headquarters in Wrexham in May – just a mile from his care home where he was ‘devoted’ to his 40 elderly residents.

His heartbroken wife Louise told a coroner he was finding it difficult to deal with seeing the residents suffering, securing PPE for staff and trying to get medical help to the north Wales home.

An inquest into his death heard police officers found him dead in his car with a wound to his head from the shotgun.

Father-of-four Vernon Hough, 61, was found fatally insured at a police headquarters in Wrexham – just a mile from his care home where he was ‘devoted’ to his 40 elderly residents

His heartbroken wife Louise told a coroner he was finding it difficult to deal with seeing the residents suffering, securing PPE and trying to get medical help.

Mrs Hough said: ‘He wasn’t afraid of catching it, he was afraid of spreading it.’

The inquest heard Mr Hough was found by police in their car park in Llay, Wrexham, on May 21 with the door open and the gun in view.

Assistant coroner for North Wales East and Central David Pojur, recorded a conclusion of suicide at the Ruthin inquest.

He said: ‘This is a very sad death, when the pressure of working through the pandemic had overwhelmed your husband.’

Mr Pojur said the situation had affected his mental health and ‘it became too much for him.’

His staff have planted a memory tree in tribute to their boss at his care home – and described him as a ‘special man who will be forever in our hearts..’

Gwastad Hall was opened in 1987 after the Hough family converted the old hall on the 11-acre site in Cefyn-y-Bedd into a nursing home.

Grandfather Vernon described it as a labour of love looking after the residents – and was described as a ‘surrogate father’ to many of them.

His heartbroken wife Louise told a coroner he was finding it difficult to deal with seeing the residents suffering, securing PPE for staff and trying to get medical help to the north Wales home at Gwastad Hall (pictured)

He was often spotted watering the plants outside and his family asked mourners to plant flowers in memory of Mr Hough because of his ‘love of flowers.’

They also accepted donations to his ‘beloved residents and devoted staff’ at the care home.

His obituary said: ‘He will be greatly missed by more people than he ever thought.’

Mr Hough was described as ‘devoted’ to his residents by Care Forum Wales.

Mario Kreft CBE, the chair of Care Forum Wales, said: ‘We were deeply saddened and shocked to hear the tragic news about Vernon and our thoughts are with the family at this difficult time.

‘Vernon and his wife Louise have been long-term supporters of Care Forum Wales and Gwastad Hall has been a valuable and much-respected part of the community for many years.

‘He will be greatly missed by his immediate family, friends as well as the staff and the residents to whom he was devoted.’

It called for a public inquiry into the Welsh Government’s handling of the crisis – and wants to it look into the lack of testing, availability and cost of PPE and lack of financial support.

Mr Kreft said: ‘This is a crisis that cannot be brushed under the carpet. We have grave concerns at the way this pandemic has been handled and the tragic costs of these decisions on human lives. Clearly, questions must be answered and responsibility accepted.’

Black Friday 2020: Get these valuable Sony headphones at a huge discount

Black Friday 2020: Get these valuable Sony headphones at a huge discount