Did country singer Garth Brooks get hair plugs for the inauguration?


Country singer Garth Brooks performed a rousing rendition of Amazing Grace at the inauguration of the 46th President Joe Biden – however his vocal talents were almost entirely upstaged by his very full head of hair, which led many social media users to believe he has had hair plugs.

The 58-year-old took to the stage at the Capitol to perform the moving ballad, during which he removed his signature cowboy hat, revealing impressively full locks – a much fuller head of hair than he has been seen with over the past decade.

Within minutes, Twitter was flooded with speculation that Garth’s thick new ‘do was not entirely natural, with plenty of inquiring minds questioning whether the conservative country star underwent a hair transplant treatment ahead of the auspicious event. 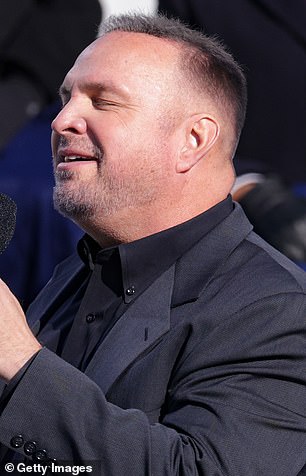 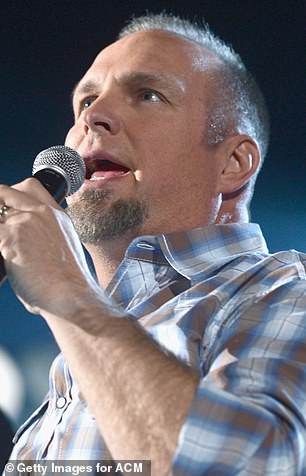 Changes: Garth Brooks sparked speculation that he has hair plugs after displaying a much fuller head of hair at the inauguration (left) than he has in recent years (pictured right in 2013) 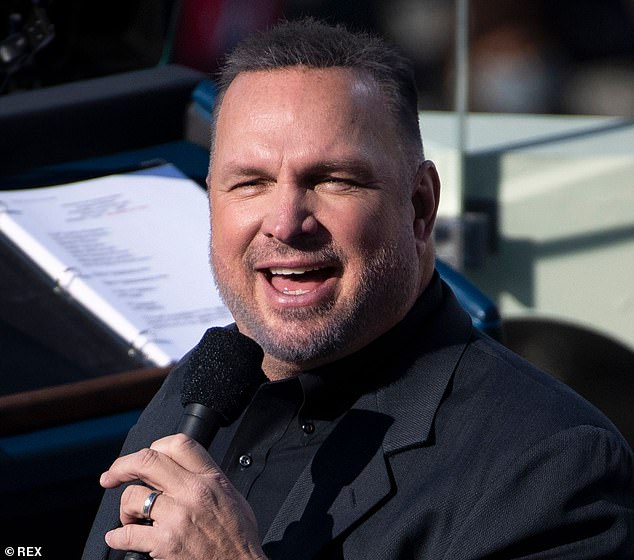 Spot the difference: The 58-year-old’s hair is much darker than it has been in the past, and it appeared to be much thicker 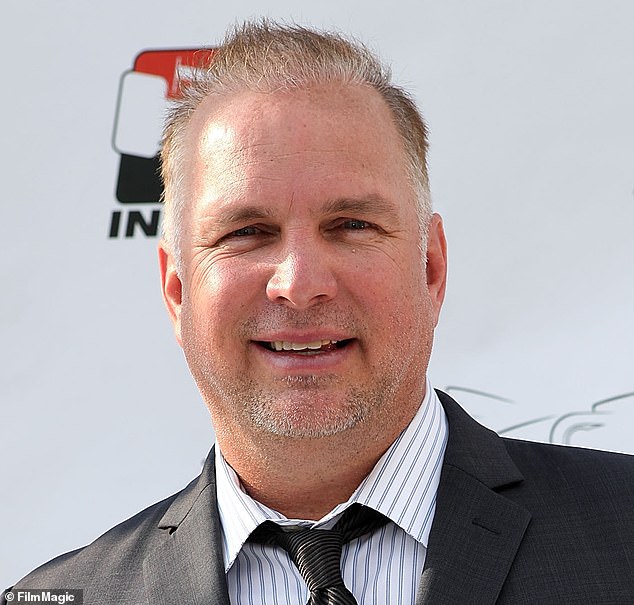 Surprise: Typically, Garth covers his head with a cowboy hat or baseball cap for performances, but on the rare occasions when he has bared it (as in 2012), his hair has been thinning and light

‘When did Garth Brooks get hair?’ asked one viewer, while another more bluntly stated: ‘My biggest takeaway from the inauguration was that Garth Brooks got new hair.’

Another chimed in: ‘Couldn’t get past his new hair plugs. Can say that as a card carrying bald guy.’

‘Someone has to say it. Garth Brooks has great hair plugs,’ one then joked.

More often than not, Garth covers his head with some form of hat for public appearances, be it a Stetson in homage to his southern heritage, or a baseball cap.

However, on the rare occasions when the music star has appeared with his head bared, he has displayed thinning hair that is a world away from the thick locks he sported at the inauguration.

In addition, he appeared to have colored his hair in anticipation of the event, where he was seen modeling much darker locks than the usual graying shade he is most recognized for. 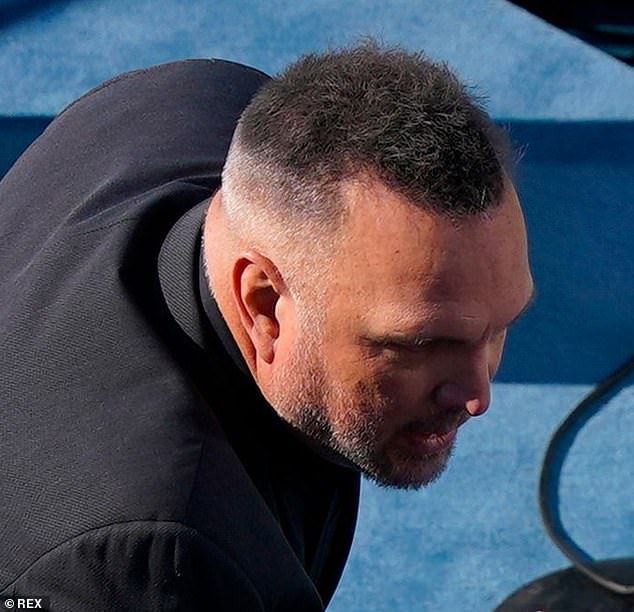 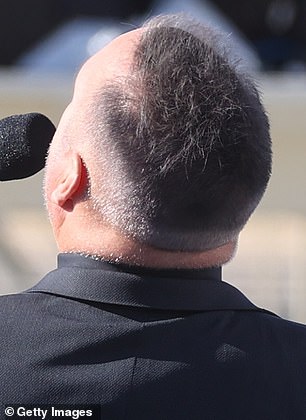 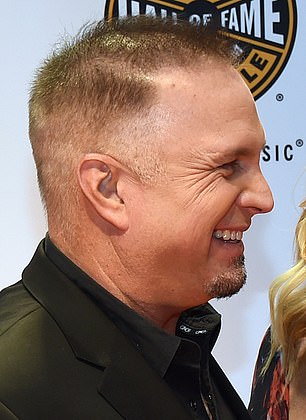 Now and then: Garth’s balding patches appear to have been filled in somewhat in comparison to 2016 (right), with many social media users insisting it must be the result of hair plugs 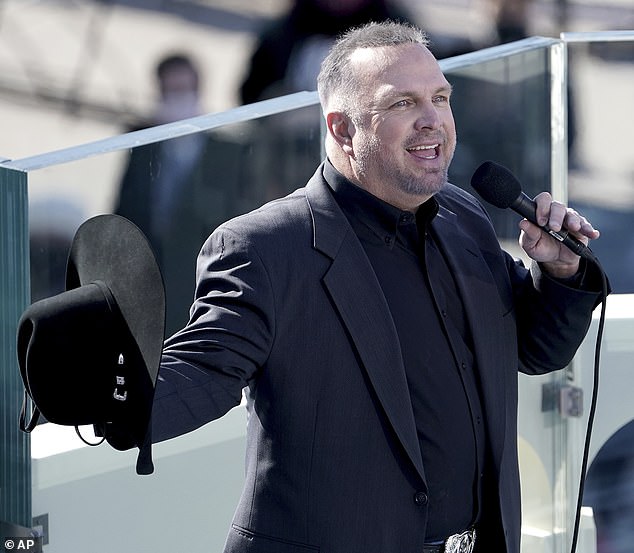 Woah: When the singer removed his signature Stetson to reveal his full head of hair, viewers were quick to question how he achieved such impressive locks 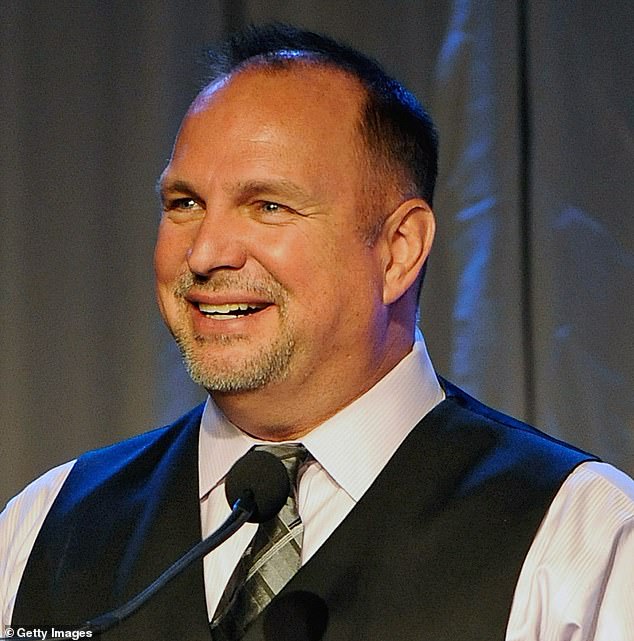 Hair today… not yesterday: Over the years, Garth’s hair has slowly been thinning, as seen when he was inducted into the Nashville Songwriters Hall of Fame in 2011 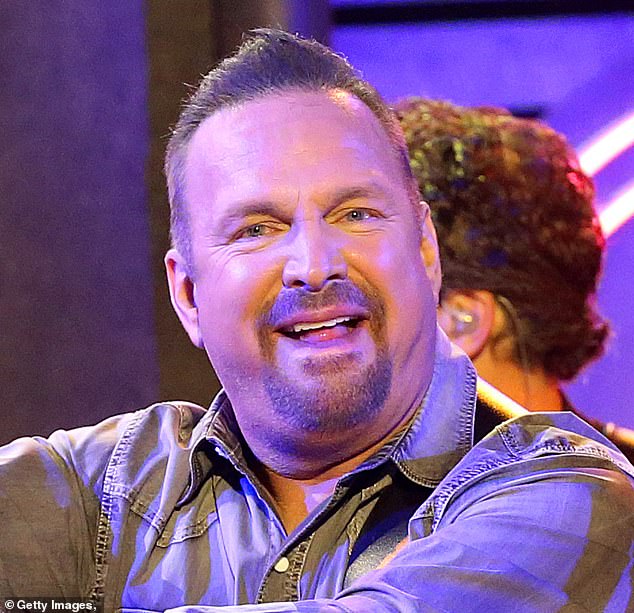 The start? Garth’s hair began to look slightly thicker and fuller back in November 2019 (pictured) – and some Twitter users suggested that he has had hair plugs for a while now

His transformation left many in a state of shock – while some applauded his new look, praising him for giving himself a thicker ‘do.

‘Garth Brooks has… hair?’ one person asked on Twitter in the wake of Garth’s performance, as another person wrote: ‘May we all have the strength of Garth Brooks’ hair plugs.’

‘I see Garth Brooks brought out the full dress hair plugs for his performance with the Marine band,’ a witty user then joked.

Others mocked the singer, suggesting that he was perhaps trying to earn a brand deal with a hair brand like Supercuts.

Although it is not known how exactly the country singer managed to boost his locks, there are several different treatments traditionally used to thicken up thinning or balding hair.

The former of the two involves removing a thin strip of hair from the back of the head and dividing it into small pieces or grafts that each contain between one and four hairs.

These grafts are then transplanted to areas of the head where hair is lacking.

Speculation: Twitter users were quick to spot Garth’s newly-thickened head of hair, with some calling out his apparent hair transplant, while others simply voiced confusion

At least it was memorable! Despite Garth receiving wide praise for his performance of Amazing Grace, it was his hair that stole the show

The latter of the two requires experts to remove individual hairs from the head one by one, before placing them into tiny cuts made in the scalp in the hopes that they will implant and generate new growth.

Hair transplants in the US can cost anywhere from $4,000 to $15,000 depending on the size of the area that is being treated.

The online uproar over Garth’s hair is not the only source of controversy surrounding his inauguration performance.

Some of his more conservative, Trump-supporting fans voice outrage that Republican Garth was planning to perform at the inauguration of a Democratic President who bested Trump in the election.

Garth has performed at almost every inauguration ceremony since Jimmy Carter became President in 1977, except for Ronald Reagan’s and Donald Trump’s – which he had to miss because of a prior commitment.

After fans expressed upset over his agreement to perform at Biden’s ceremony, for which he received a personal invite from new First Lady Jill, Garth hit back, insisting that his appearance at the event was not intended to be a ‘political statement’, but rather a show of support for the ‘unifying’ message of the Biden Harris campaign.

‘It’s not a political statement,’ he said. ‘This is a statement of unity. This is kind of how I get to serve this country.’

What are hair transplants and how do they work?

A hair transplant is a procedure to move hair to an area that’s thin or bald.

A hair transplant in the US typically costs anywhere between $4,000 and $15,000, depending on the extent of hair loss, the type of procedure you have, and the quality of the clinic and its team.

There are 2 types of hair transplant.

The head does not need to be shaved – only the area where the skin is removed is trimmed.

Hair transplants usually take a day, but you should not need to stay overnight.

If a large area is being treated, you may need to have 2 or more sessions a few months apart.

Your surgeon will tell you how to look after your graft. You should be given a spray to use to help recovery and hair growth.