Dido Harding insists Test and Trace has been a success

Baroness Dido Harding — the former head of NHS Test and Trace — today insisted the scheme has been a success, despite SAGE saying the scheme has failed to slow the pandemic.

She told MPs she was ‘proud’ of the work done by the £37billion much maligned Covid contact tracing system.

Facing a grilling on the scheme, Baroness Harding said the scheme had achieved its goal of helping break the chains of transmission.

Baroness Harding quoted a Government study suggesting the scheme has reduced transmission by ’18 to 33 per cent’.

Her comments come after the Scientific Advisory Group for Emergencies (SAGE) said the system had a ‘marginal’ impact on tackling the virus because it neither tests nor traces enough people.

Boris Johnson today urged the nation not to delete the NHS Covid-19 app, amid fears millions of Brits will be ‘pinged’ and told to self-isolate every week after ‘Freedom Day’.

He told the public to stick with it ‘for a little bit longer’, with people who have had both vaccinations being no longer forced to isolate from August 16 — six weeks after all restrictions were supposed to end on July 19.

Test and Trace has been allocated a £37billion budget for two years — £18.5billion-a-year — but has already burned through £23billion of that cash according to figures released earlier this month.

Baroness Harding’s tenure was criticised by former Treasury chief Lord Macpherson, who accused her of presiding over ‘the most wasteful and inept public spending programme of all time’. 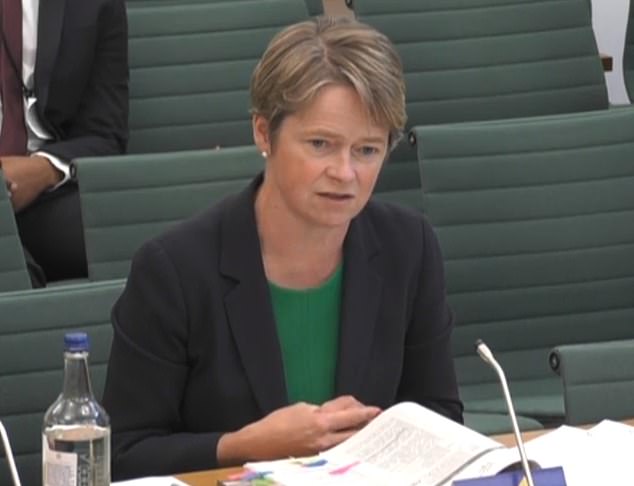 Baroness Dido Harding today insisted the £37billion NHS Test and Trace scheme has been a success, while speaking at the Public Accounts Committee

Boris Johnson today urged the nation not to delete the NHS Covid-19 app and to stick with it ‘for a little bit longer’ amid fears millions of Brits will be ‘pinged’ and told to self-isolate every week after ‘freedom day’.

The Prime Minister said the ‘day is not too far off’ when contacts of positive cases will no longer have to self-isolate, with the current approach to quarantine coming to an end from the middle of next month.

The PM’s plea to the country is unlikely to assuage the anger of business chiefs who have warned the app will cause chaos after July 19.

However, they were given a glimmer of hope as Dr Jenny Harries, the head of the UK Health Security Agency, revealed work is taking place to ‘tune’ the app to reflect the growing number of people who have been vaccinated.

Ms Harries told MPs that ‘it is entirely possible to tune the app to ensure that it is appropriate to the risk’ as the vaccine rollout continues to reduce the threat of transmission.

There are reports that many people are deleting the app to avoid being contacted and told to self-isolate as the country braces for a surge in coronavirus case numbers.

Rishi Sunak had hinted this morning that the app could be tweaked as he said Sajid Javid, the Health Secretary, is ‘aware of the frustration that people have’ with the technology.

He said that ‘most people’s concerns rest with how the app is working’ and Mr Javid is ‘looking at what the most appropriate, balanced and proportionate approach to isolation is’.

But asked if NHS Test and Trace had been given to big a brief in breaking the chains of transmission at the Public Accounts Committee today, Baroness Harding downplayed how big a role the contact tracing scheme was intended to play.

She said: ‘The purpose and objective of NHS Test and Trace was to help break the chains of transmission as part of the overall Covid response.

‘It was one, not the only tool that the Government set out as its response to Covid. So the non-pharmaceutical interventions, the NPIs, the restrictions we’ve all had to live through [are the first].

‘NHS Test and Trace [is the] second, vaccines the third and the fourth, the therapeutic treatments that help people cope with Covid better.

‘So NHS Test and Trace was never set up to be the single solution to Covid.’

She insisted the most recent studies suggest

Baroness Harding said: ‘I say this with some trepidation, because the science is still evolving on how we evaluate these different programmes.

‘But the evaluations that exist to date suggest that NHS Test and Trace had a material impact in reducing the rate of infections.

‘There are a number of different scientific groups who have been trying to model the impact [which is] of the order of 18 to 33 per cent reduction in the infection rate due to testing, tracing and isolation.’

NHS Test and Trace was headed-up by Lady Dido Harding from its launch in May last year.

She stepped down last month, before applying to become the new head of the NHS — a job which reports suggest she is ‘unlikely’ to get.

But Baroness Harding said she would be happy to lend her expertise to Dr Jenny Harries, the chief executive of the UK Health Security Agency who has taken over control of the scheme, and Shona Dunn, the second permanent secretary for the Department of Health.

She said: ‘I’m incredibly proud to have worked part of the Covid response and I’m always there if Jenny or Shona need advice.’ 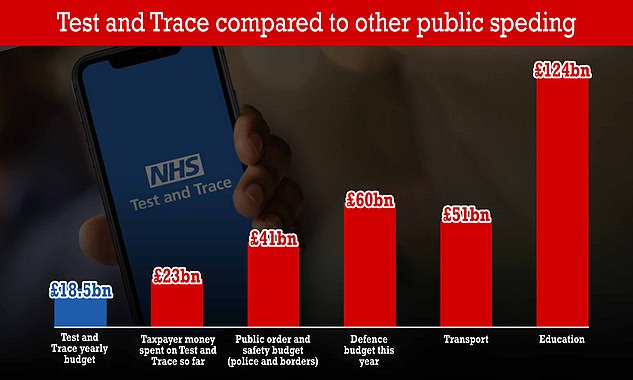 NHS Test and Trace’s yearly budget is worth almost have of the total yearly budget for policing and public safety in the entire UK. And it is almost a third of the defence budget

Private consultants are charging more than £1,000-a-day for their work on NHS Test and Trace, with the service having now cost the taxpayer more than £23billion so far — despite scientists saying it has failed to slow the pandemic.

From TalkTalk to Test and Trace: Dido Harding’s journey to  leading UK’s ‘most wasteful public spending programme of all time’

During her time in charge she was twice give MoneyMail’s ‘wooden spoon’ award for having the most appalling customer service of any British company.

It was handed record fines by the regulator Ofcom for over-billing and in 2015 fell victim to a cyber attack in which 157,000 clients had their data stolen, causing 100,000 of them to leave, company profits to halve and TalkTalk’s shares to lose two-thirds of their value,

Harding, 53, who had by then been elevated to the House of Lords as Baroness Harding of Winscombe by old university friend David Cameron — an ally of her Tory MP husband John Penrose — was eased out of her £2.7 million-a-year role in 2017, only to be immediately handed a new job chairing the powerful hospital regulator NHS Improvement.

Then came another big promotion: last May, the Prime Minister put Harding in charge of Test and Trace, promising that this would help free Britain from the shackles of coronavirus.

Despite its huge budget, with the 2,500 consultants on its payroll earning an average of £1,000 a day, Harding’s organisation has ‘failed to make a measurable difference to the progress of the pandemic’, according to a February report by the Commons Public Accounts Committee.

The grandee Lord Macpherson, former head of HM Treasury, has dubbed it ‘the most wasteful and inept public spending programme of all time’.

And this week, a damning National Audit Office report found that Test and Trace is still struggling to get to grips with the basics of its job.

Last month Harding quit Test and Trace, defending the service from criticism by saying the exceptions were ‘set too high’.

She also said Covid testing in the UK was now ‘the envy of the world’.

Last month it was revealed Harding had applied to become the new head of the NHS, after Sir Simon Stevens leaves his role.

But reports suggested that after Matt Hancock’s resignation amid revelations of an affair with an aide, that Harding she was ‘unlikely’ to get the role,

An ally of the prime minister told the Financial Times that Boris Johnson ‘did not want further controversy’ at the Department of Health and Social Care, adding: ‘I can’t see Dido getting the nod, especially after the last couple of days.’

And multinational Deloitte is among those supplying consultants, with its contract worth £298m out of £516m in fees agreed with City companies including McKinsey and Ernst and Young.

A National Audit Office report at the end of June revealed that 2,239 consultants are employed by NHS Test and Trace – 45 per cent of the organisation’s full-time staff – despite the organisations claim to be attempting to reduce their numbers.

The service employed 18,000 contact tracers last October, 13,000 in February and 10,000 in March – but their contracts make them difficult to switch between departments leading to many of them going unused.

Auditors also found that 80 per cent of contact tracers spent their time sitting idle while on shift, and that public compliance with their instructions was ‘low’.

And in February just after the peak o the second wave, every contact traced cost the taxpayer £47, compared to £5 per contact last October because the service struggles to match its staff levels to variable demand.

The latest NAO figures show Serco has been awarded contracts worth £623m to run contact tracing and test sites, while Deloitte’s £298m was purely for consultancy services’.

At least 73 consultancy firms have been used, including the above mentioned Deloitte, as well as  the Boston Consulting Group and PA Consulting.

Reports last year suggested that consultants at one firm, BCG, were receiving more than £6,600-a-day for their work on NHS Test and Trace.

Average daily wages for consultants are thought to be in the region of £1,000.

According to a report in the Times today, some consultants were earning ‘city rates’ of thousands of pounds a week – and some as much as £1,200.

The consultants have reportedly been helping with topics including ‘diversity and inclusion’, ‘human-centred’ software, and media strategy.

One former Waitrose boss, Ben Stimson, appointed to the role of chief customer officer at NHS Test and Trace, reportedly signed off on a £1,200-a-day ‘social purpose’ consultant.

The consultant had ‘no medical expertise’, the Times reports.

The criticism comes amid mounting pressure on the Test and Trace service over its cost and efficacy.

The two-year budget for the service was set at £37billion. It has already spent £23billion of that.

In comparison, the Government has sidelined an estimated £40billion on policing and security and £60billion on defence in 2021/22.

One particular area of concern is on the spend of professional services – such as management consultants – which has now spiralled to more than £438million.

According to figures released in February, Test and Trace has used a total of 2,500 consultants since the start of the pandemic.

According to reports in the Financial Times last month, Test and Trace officials say the average day rate for consultants on the programme is £1,100.

The Department of Health and Social Care (DHSC) last month attempted to justified the scale of investment, in part, on the basis that an effective test and trace system would help avoid a second national lockdown.

But since its creation there have been two more lockdowns.

I'm selling Nvidia this week [July 08th], and this is why!

Naya Rivera's mother speaks out about 'heavy' grief, one year after her tragic death