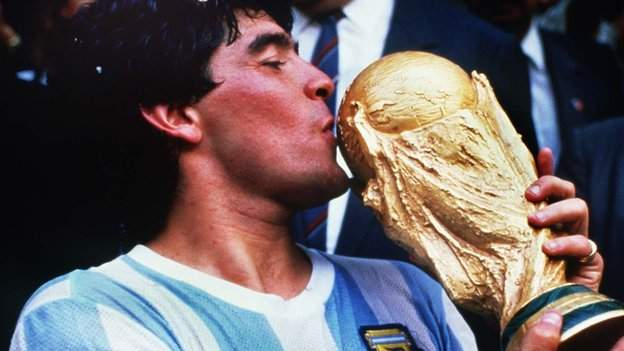 One of the game’s most gifted players, the Argentine boasted a rare combination of flair, flamboyance, vision and speed which mesmerised fans.

He also outraged supporters with his controversial ‘Hand of God’ goal and plunged into a mire of drug abuse and personal crises off the pitch.

Short and sweet – The football genius

Born 60 years ago in a Buenos Aires shanty town, Diego Armando Maradona escaped the poverty of his youth to become a football superstar considered by some to be even greater than Brazil’s Pele.

The Argentine, who scored 259 goals in 491 matches, pipped his South American rival in a poll to determine the greatest player of the 20th Century, before Fifa changed the voting rules so both players were honoured.

Short and stocky, at just 5ft 5in, he was not your typical athlete.

But his silky skills, agility, vision, ball control, dribbling and passing more than compensated for lack of pace and occasional weight problems.

He may have been a whizz at running rings round hostile defenders but he found it harder to dodge trouble.

Hand of God & Goal of the Century

Maradona’s 34 goals in 91 appearances for Argentina tell only part of the story of his rollercoaster international career.

He led his country to victory at the 1986 World Cup in Mexico and a place in the final four years later.

In the quarter-final of the earlier tournament, there was a foretaste of the controversy that would later engulf his life.

The match against England already had an extra friction, with the Falklands War between the two countries having taken place only four years beforehand. That on-field edge was to become even more intense.

With 51 minutes gone and the game goalless, Maradona jumped with opposing goalkeeper Peter Shilton and scored by punching the ball into the net.

Four minutes later, he scored what has been described as the ‘goal of the century’ – collecting the ball in his own half before embarking on a bewitching, mazy run that left several players trailing before he rounded Shilton to score.

The first goal was dubious; the second was a bloody miracle

“You have to say that is magnificent. There is no doubt about that goal. That was just pure football genius,” said BBC commentator Barry Davies.

England pulled one back but Argentina went through, with Maradona saying it was “much more than winning a match, it was about knocking out the English”.

A hero for Napoli – but drugs take hold

There were more than 80,000 fans in the Stadio San Paolo when he arrived by helicopter. A new hero.

He played the best club football of his career in Italy, feted by supporters as he inspired the side to their first league titles in 1987 and 1990 and the Uefa Cup in 1989.

A party to celebrate the first triumph lasted five days with hundreds of thousands on the streets, but Maradona was suffocated by the attention and expectation.

“This is a great city but I can hardly breathe. I want to be free to walk around. I’m a lad like any other,” he said.

He became inextricably linked to the Camorra crime syndicate, dragged down by a cocaine addiction and embroiled in a paternity suit.

After losing 1-0 to Germany in the final of Italia 90, a positive dope test the following year triggered a 15-month ban.

He returned and arrested his slide, getting his act together to play in the 1994 World Cup in the USA, but alarmed viewers with a maniacal full-face goal celebration into a camera.

Maradona was withdrawn midway through the tournament after he was found to have taken the banned substance ephedrine.

After his third positive test three years later, he retired from football on his 37th birthday, but continued to be plagued by problems.

Maradona was given a suspended jail sentence of two years and 10 months for an earlier incident where he shot at journalists with an air rifle.

His cocaine habit and alcoholism led to several health issues. He put on weight, rising to 128kg (20 stone) at one point, and suffered a major heart attack in 2004, which left him in intensive care.

He had gastric-bypass surgery to help stem his obesity, and sought sanctuary in Cuba while battling to overcome his drug addiction.

Despite all this, Maradona was named manager of the Argentina national team in 2008 and took the side to the World Cup quarter-finals two years later before his reign ended with a 4-0 defeat by Germany in the quarter-finals.

Various managerial roles followed for a figure who continued to divide opinion, and continued to make headlines.

He needed reconstructive surgery on his lip after one of his pet shar pei dogs bit him, and publicly recognised his son Diego Armando Junior who was born from an extra-marital affair.

A snapshot of his chaotic lifestyle came when he attended Argentina’s match against Nigeria at the 2018 World Cup in Russia.

He unveiled a banner of himself, danced with a Nigeria fan, prayed to the heavens before the game, wildly celebrated Lionel Messi’s opener, fell asleep and gave a double middle finger salute after Argentina’s second goal.

Diego Maradona obituary: Argentine legend rose from poverty to become one of the greatest ever

Diego Maradona obituary: Argentine legend rose from poverty to become one of the greatest ever