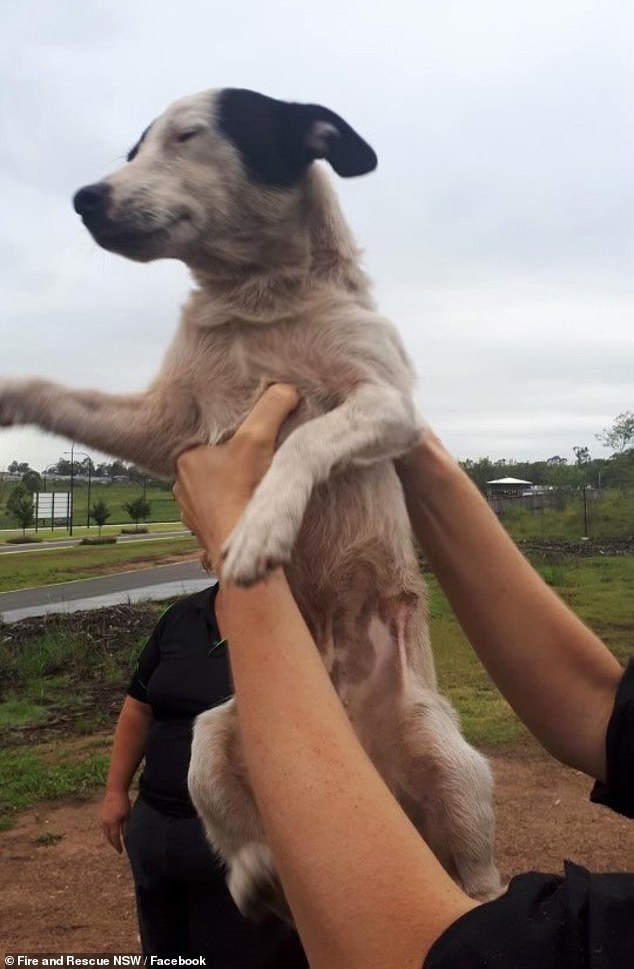 A Jack Russell named Diesel has been rescued uninjured from under the engine of a moving car after he traveled on a busy highway for half an hour.

Diesel’s owner had been traveling along the Hunter Expressway in New South Wales on Tuesday afternoon when they heard a familiar howling.

The 18-month-old stowaway had hitched a ride under the bonnet of the Hyundai SUV from Singleton to Branxton as the car reached speeds of up to 100km/h.

Diesel the Jack Russell is one very relieved pooch after he was rescued from under a car engine by firefighters on Tuesday (pictured: Diesel after being safely rescued)

Diesel was given the all-clear by one firefighter who is also a qualified emergency vet nurse (pictured: the delicate operation to free the canine)

The owner pulled over and called emergency services with firefighters from Branxton Fire Station rushing to the scene and working to free the trapped canine.

Rescuers said they were not confident the operation would be a success as Diesel had gone worryingly quiet after the car pulled over, Fire and Rescue NSW said.

But to the crew’s delight he was pulled free relatively unharmed and given the all-clear by one firefighter who is also a qualified emergency vet nurse – leading to a very relieved pooch and owner.

Posting to their Facebook on Tuesday night, Fire and Rescue NSW said: ‘The adventurous dog is now resting comfortably back home’.

People commenting on the post said the Jack Russel was one very lucky dog.

‘Poor little fella. How scary for all involved. But how good are our emergency services? Not only a firefighter, but an emergency vet nurse too – what a superstar,’ one person said.

‘So glad the puppy is safe, good work guys! You could say that the car had a ‘Diesel Engine’,’ another said.

‘He is a tough Jack Russell, he will be back into mischief as soon as his owners back is turned,’ added a third.

Diesel’s name will no doubt have a whole new meaning to his owner, though he will likely think twice before going near a car again.

Firefighters from Branxton in New South Wales rushed to the car after the woman heard howling and pulled over (pictured: firefighters working on the car to free the trapped pooch)