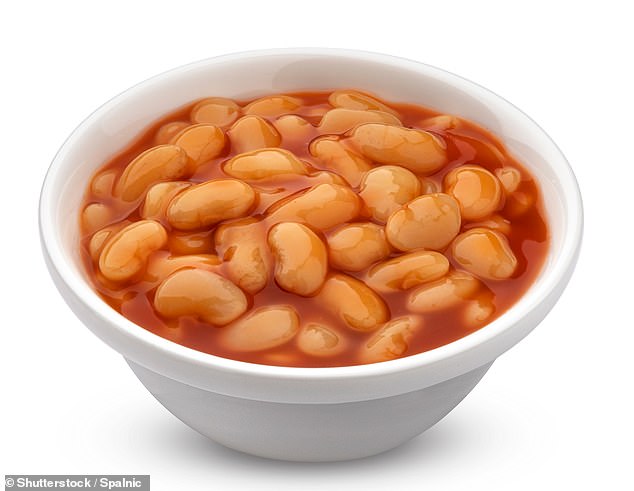 Last week, it was suggested that we eat a certain cereal brand topped with baked beans.

It’s difficult to see the idea taking off but there’s no doubt that baked beans themselves have much to offer — an average half-can serving counts as a veg portion, has a quarter of your daily fibre as well as protein, plus slow-releasing carbs.

The tomato sauce provides lycopene (linked with lower risk of heart disease and stroke). But not all cans are equal. Here, dietitian Helen Bond selects five of the healthiest.

The tomato sauce provides lycopene (linked with lower risk of heart disease and stroke). But not all cans are equal

The ingredients here are fairly standard, with 51 per cent haricot beans and the rest lycopene-rich tomatoes (a third of the can), along with water, sugar, salt, cornstarch and seasonings.

But the levels of salt and added sugar are on the lower side, with an eighth less salt and 13 per cent lower total sugar content per half can serving than standard Heinz Beanz.

These beans have no added sugar but are sweetened with zero-calorie stevia (from the stevia plant).

These are the lowest salt baked beans, too, with around 12 per cent of your daily limit per half can, compared with up to twice or more in some varieties. This product is packed with fibre, providing almost a third of your daily needs.

Overall, this makes for an even more nutritious can of beans, with a smidge more protein than usual, though the sugar and salt levels are similar to a standard variety — there’s a fifth of your daily salt limit and just under 1½ teaspoons of added sugar (nearly a quarter of your daily limit of this type — the highest here).

These have a slightly bigger ratio of beans to tomato sauce than usual (60 per cent beans, versus a more common 50 to 52 per cent).

And they don’t have any of the low-nutritional value corn starch that usually keeps the sauce thick.

Unusually, cannellini beans, which are slightly higher in protein, are used here, so these are the best pick for protein, which helps curb hunger (with 25 per cent more than in standard Heinz Beanz and nearly as much as two boiled eggs). But there’s around a teaspoon of sugar per serving.

The wide variety of flavouring herbs and spices — including nutmeg, dill and cloves — in these beans offers a slight health advantage over other products, as spices are high in phytochemicals, plant chemicals that gut microbes can feast on and transform into a range of compounds such as short-chain fatty acids linked with cancer prevention and better heart health.

While there is no added sugar, the concentrated apple juice in this can acts in the same way as table sugar (though there’s a little less — maybe a quarter teaspoon less — than in many baked bean brands). Half a can has 20 per cent of your daily salt limit, too.

Italian virologist: We have to close for 3 months and continue vaccination if we want to overcome the Corona crisis

Italian virologist: We have to close for 3 months and continue vaccination if we want to overcome the Corona crisis