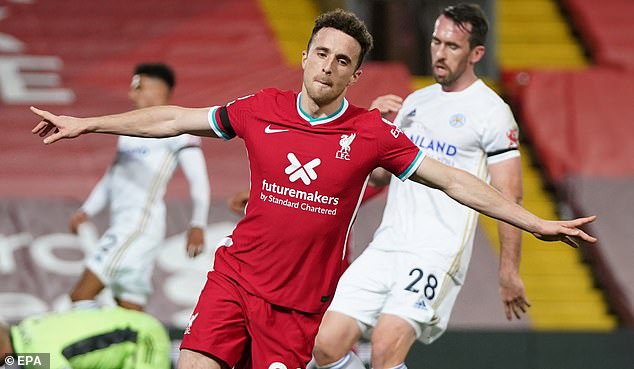 Diogo Jota has written his name into the Liverpool history books after starring in the club’s impressive 3-0 win over Leicester on Sunday evening.

The Portuguese forward has been in red hot form since joining the club earlier this summer, and his headed goal against the Foxes saw him become the first Liverpool player to score in his first four top-flight league appearances at Anfield.

Jota doubled the scoring with a neat glancing first-half header to add to Jonny Evans’ opening own goal before Roberto Firmino added further gloss to the scoreline, after a number of missed chances, with an 87th-minute header.

The build up for Jota’s goal was just as impressive as the record itself, with Jurgen Klopp’s men able to string together a club-record 30 passes before Andy Robertson curled in a perfect cross onto the head of former Wolves man.

It saw him add to his run of three goals at his new home, after he came off the bench to score against Arsenal in September, before goals against Sheffield United and West Ham maintained his brilliant run of form at home.

His goal and overall performance earned him rave reviews from Patrice Evra and Freddie Ljungberg, who heaped praise on the forward after he stepped in to replace Mohamed Salah who is out after testing positive for coronavirus last week.

‘When you play with confidence, he knows Robertson will deliver it and he knows where the space was,’ Evra told Sky Sports. ‘Normally Salah would play instead of him but he is so important for Klopp, especially when he knows he can’t start Salah.

Ljungberg was also impressed with the 23-year-old, who is now challenging for a more permanent starting spot in Klopp’s plans.

Ljungberg added: ‘I always liked him when he was at Wolves. Of course the top three they have is tremendous but you need other players and someone of that quality to fill in like today and do what he’s doing is worth his weight in gold and that’s how you win medals.’

The Match of the Day pundits were also full of praise for the Portuguese forward.

Danny Murphy said: ‘Talk about hitting the ground running. He was all over the place.

‘He started on the right of the three where Salah plays normally, drifts into the holes in the centre of the pitch because he’s so desperate to make an impact on the game mixing his game well, dropping deep and linking up the play.

What I like is the amount of runs he makes off the ball which is what all good players do knowing when to go in behind and when to come to feet. He’s a brilliant option and another source of goals and deserves great credit for how he’s adapted for a massive club like Liverpool.’

Micah Richards added: ‘When he was at Wolves people questioned whether he can do it as this level and he really has excelled playing with better players. He seems comfortable and to have someone like Salah out the team and for him perform at this level is just incredible. His form since he’s been at Liverpool has gone through the roof.’

And it wasn’t Jota who was breaking records on Sunday.

The win against the Foxes saw Liverpool set a new club landmark of 64 home league matches without defeat – eclipsing the great team of the late 1970s and early 1980s.

Klopp hailed the ‘incredible’ achievement after the game but admitted that he has little time to enjoy it.

Liverpool were without nine players – including the likes of Virgil Van Dijk, Jordan Henderson, Trent Alexander-Arnold and Thiago Alcantara – but were still too good for the Foxes and former Reds boss Brendan Rodgers.

The performance felt like a real statement of intent, like the one delivered at the King Power on Boxing Day when they blew away nearest-challengers Leicester as their run to the title gathered pace albeit in a different style.

‘My problem is that in the moment I spoke so much about football and I think about the next game,’ he said.

‘But there will be a moment in the future when I think back and hopefully it will not be the number 64 but more.

‘It is incredible but all about the boys. It is really difficult to achieve something like this but when you think about how tight a lot of the games were and the boys had to dig in and they did that.

‘The boys on the pitch performance-wise are incredible and that is the only reason for the number.

‘It is difficult to set records at this club because our fathers and grandfathers were obviously pretty good.

‘I am happy for the players but it doesn’t feel like this in the moment because we play on Wednesday (against Atalanta in the Champions League).’