This is the shocking moment a delivery man has been filmed on CCTV appearing to spit on a plastic delivery bag which before posting it through a letter box.

The man was unaware he was being filmed at the time of the incident which took place in the Kirk Ella area of Hull on Tuesday.

The footage appears to show the man spitting on the bag before folding it in half and posting it through the letterbox. 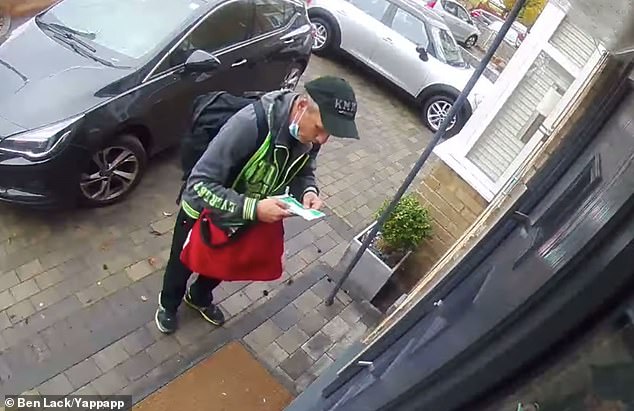 The man, who was wearing a face mask under his chin, appeared to spit on the charity envelope before posting it through the door in Hull

The man was wearing a baseball cap, dark trainers, black tracksuit bottoms and a grey and green hoodie,  had a face mask under his chin. He was also carrying a red shoulder bag.

According to Hull Daily Live, the charity bag was for the Tree of Hope children’s charity and distributed by SOS Clothes Ltd.

The couple, who did not wish to be named, said: ‘It’s awful.’

MailOnline has approached SOS Clothes Ltd for a comment.

Vote now for the best holiday events of 2020

List of top 5 goalscorers in the history of football