The family members of the men shot by teen Kyle Rittenhouse have reacted with shock to his acquittal, after a jury found he acted in self-defense,

Rittenhouse, 18, was acquitted on all counts on Friday after the Kenosha, Wisconsin jury of 12 accepted his claim that he acted in self-defense in confrontations during violent protests last summer.

Rittenhouse shot and killed Joseph Rosenbaum, 36, and Anthony Huber, 26, and fired a bullet that tore a chunk off the arm of Gaige Grosskreutz, 28.

‘Today’s verdict means there is no accountability for the person who murdered our son,’ said the family of Anthony Huber following the verdict.

‘It sends the unacceptable message that armed civilians can show up in any town, incite violence, and then use the danger they have created to justify shooting people,’ the family statement added. 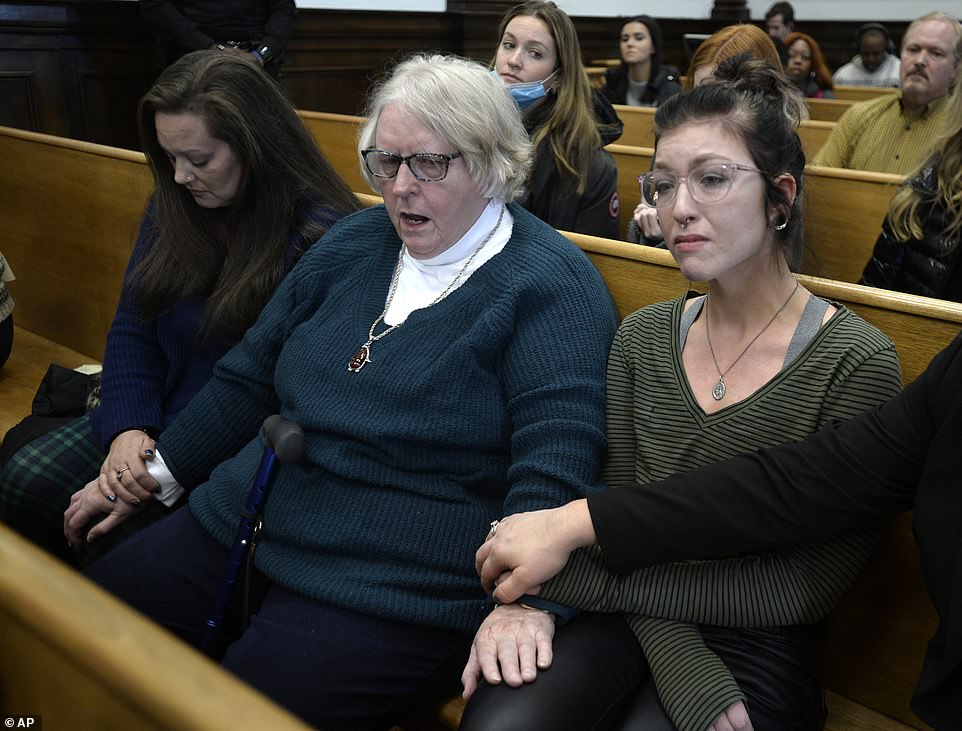 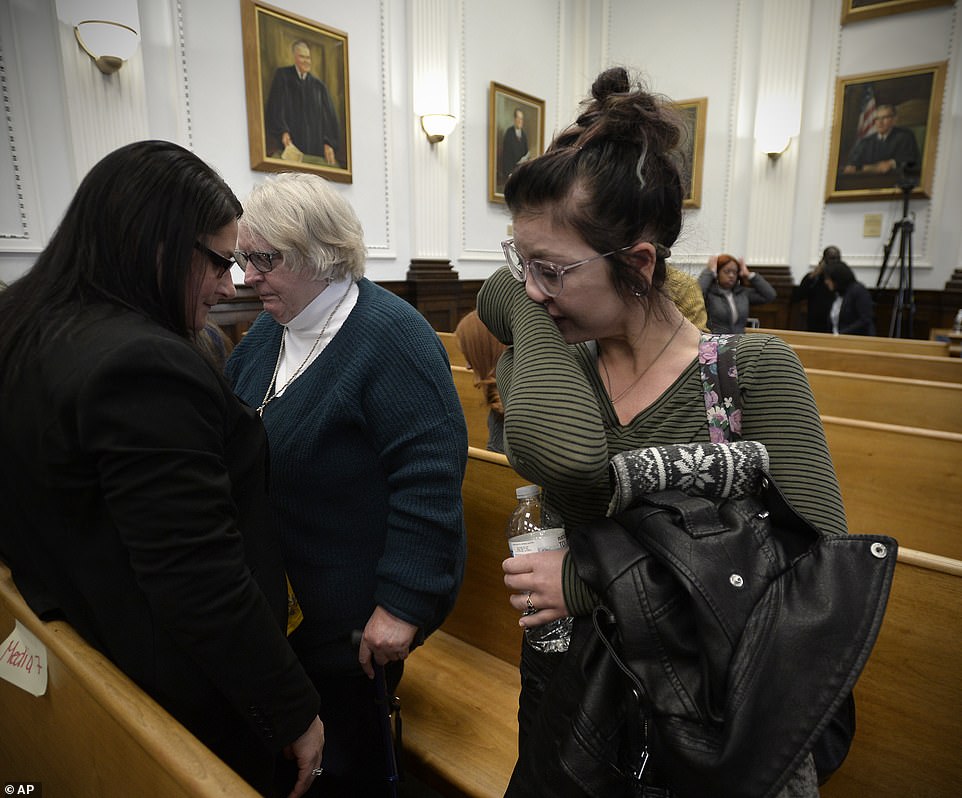 Hannah Gittings, the late Anthony Huber’s girlfriend, right, cries after Kyle Rittenhouse is found not guilty on all counts at the Kenosha County Courthouse 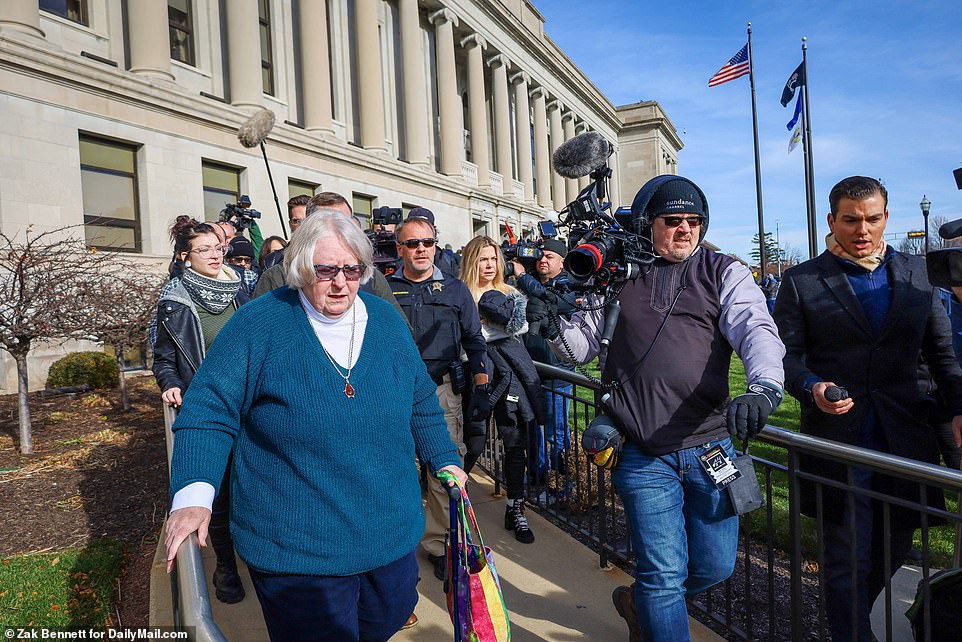 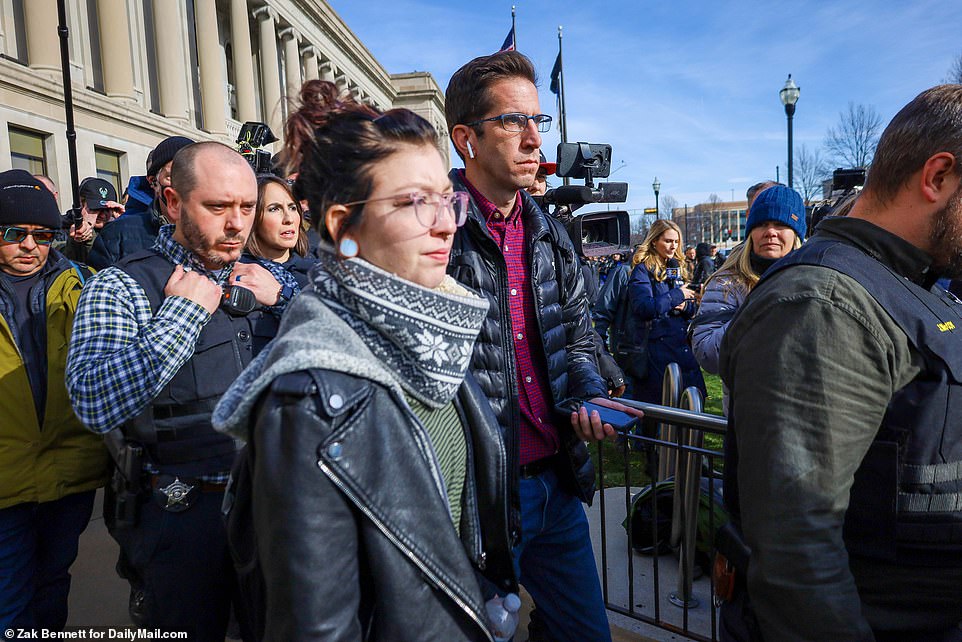 Hannah Gittings, Anthony Huber’s girlfriend, walks out of court after the trial concluded

Grosskreutz, who survived the shooting, testified at trial, but his testimony proved damaging to the prosecution, as he admitted that Rittenhouse only fired upon him after he pointed his own gun at the teen.

At trial, the jury did not hear about the criminal records of the two men who died in the shooting. Huber had felony convictions for false imprisonment and strangulation in a domestic abuse case.

Rosenbaum was a registered sex offender who was out on bond for a domestic abuse battery accusation. His sex crime conviction related to charges of raping five young boys.

The jury found Rittenhouse not guilty on all charges: two counts of homicide, one count of attempted homicide for wounding a third man, and two counts of recklessly endangering safety.

The uncle of Jacob Blake, the black man whose shooting by Kenosha police last year set off the riots during which Rittenhouse opened fire, also slammed the not-guilty verdict on Friday.

Justin Blake spoke to a large crowd of reporters outside the courthouse immediately following Rittenhouse being cleared of all five charges against him: ‘The mayor, the police chief, the people who are running the army, have blood on their hands today.’

The 52-year-old Chicago resident has been a vocal protester outside the courthouse in Kenosha where Rittenhouse faced trial.

‘This isn’t just an attack on African Americans and I keep saying that,’ said Justin Blake. 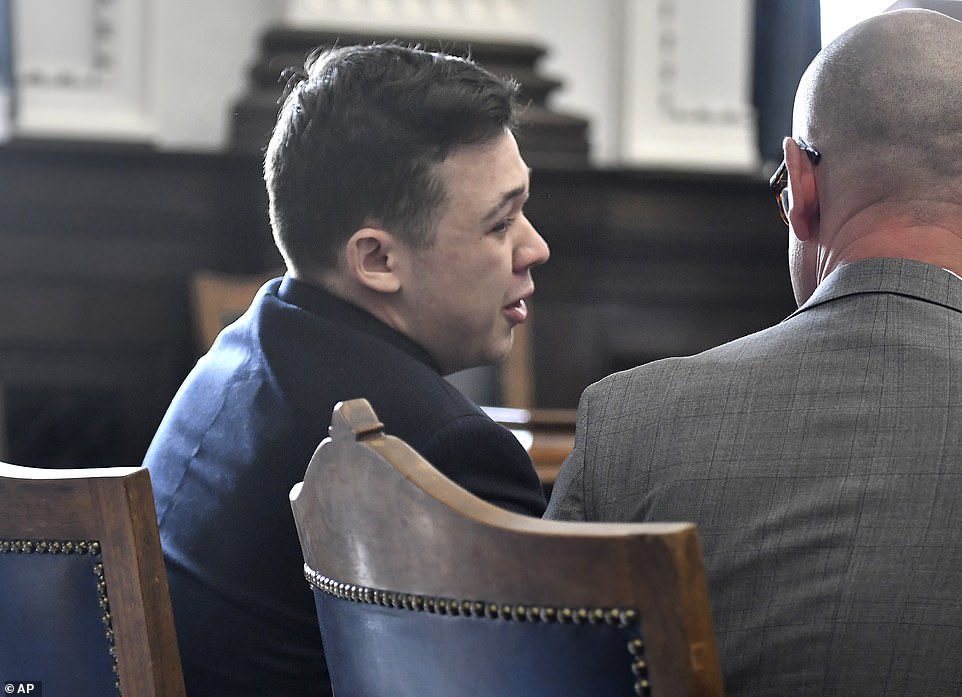 The jury found Rittenhouse not guilty on all charges: two counts of homicide, one count of attempted homicide for wounding a third man, and two counts of recklessly endangering safety 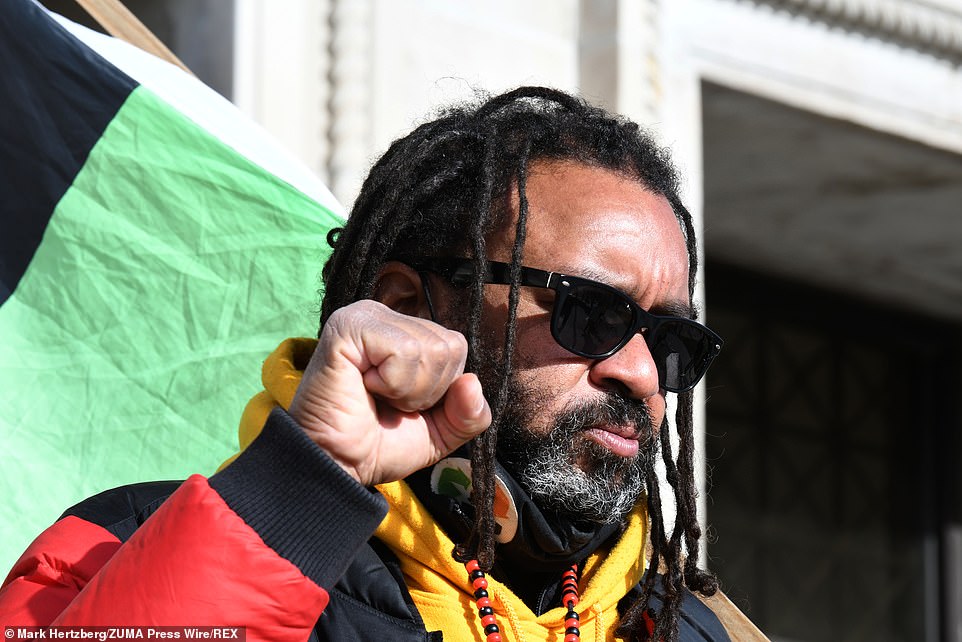 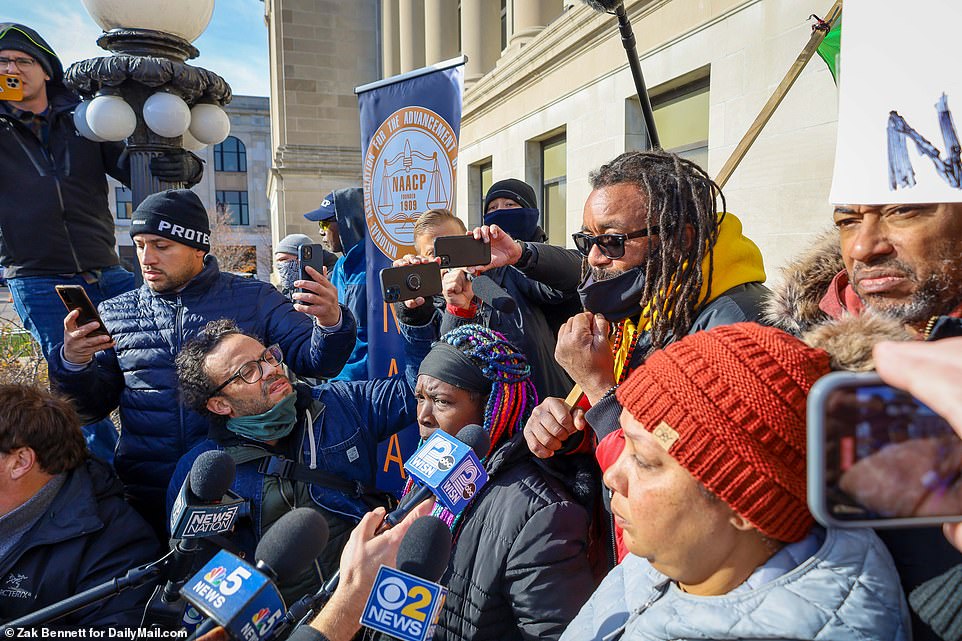 Rittenhouse broke down sobbing after the verdict and collapsed to the floor before being helped back into his chair. The verdict came shortly after the judge warned the courtroom to remain silent or be removed.

The jury — a couple of them wearing masks — showed no emotion as the verdicts were read after four torturous days of deliberation and weeks of testimony.

Rittenhouse’s mother Wendy was in the public gallery and burst into tears as the verdicts were read, while Rittenhouse victim Joseph Rosenbaum’s fiancée and victim Anthony Huber’s girlfriend and great aunt tearfully listen as their loved ones’ killer walked free.

Immediately after the verdict was read, Rittenhouse was whisked out of the courtroom and into a waiting SUV. He was seen smiling as he was driven away.

Two men in the public gallery did high-five each other but apart from that the ‘audience’ — as Judge Bruce Schroeder called them — remained quiet and filed out of the room.

All that was left was for Schroeder to complement the jurors for being attentive and co-operative. ‘I couldn’t have wished for a better jury,’ he said before reminding them playfully that they are eligible to be selected again in four years’ time.

He also told them that they had the right to discuss the case with the media if they wanted but told them they also had the right not to. Their names have not been released and he said any media requests to talk to them would be handled by the court and passed on to the jurors. 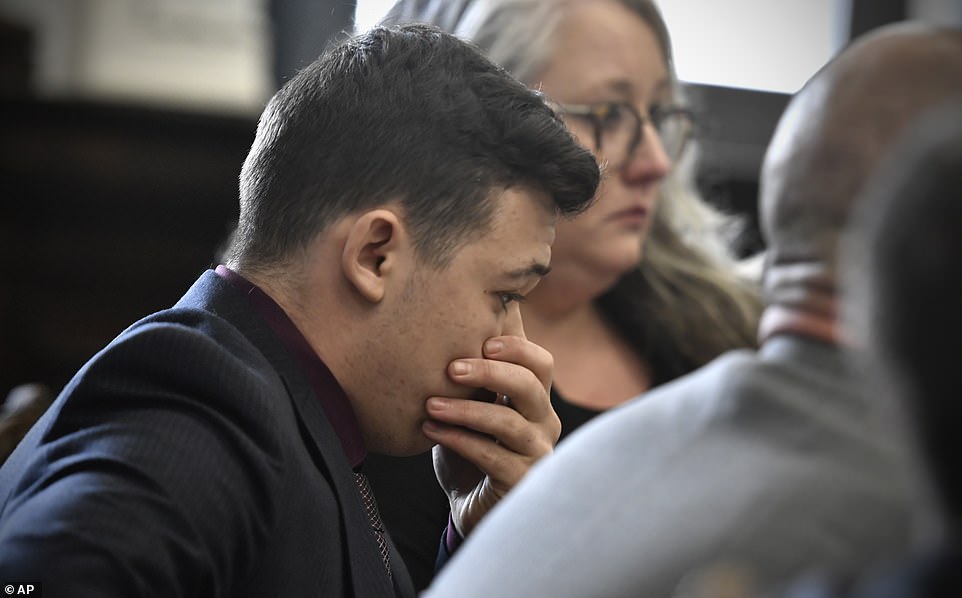 Kyle Rittenhouse has been found not guilty on all counts. The verdict came in at 12.15pm Friday in Kenosha, Wisconsin, leading to fears that the city might once again erupt in violence 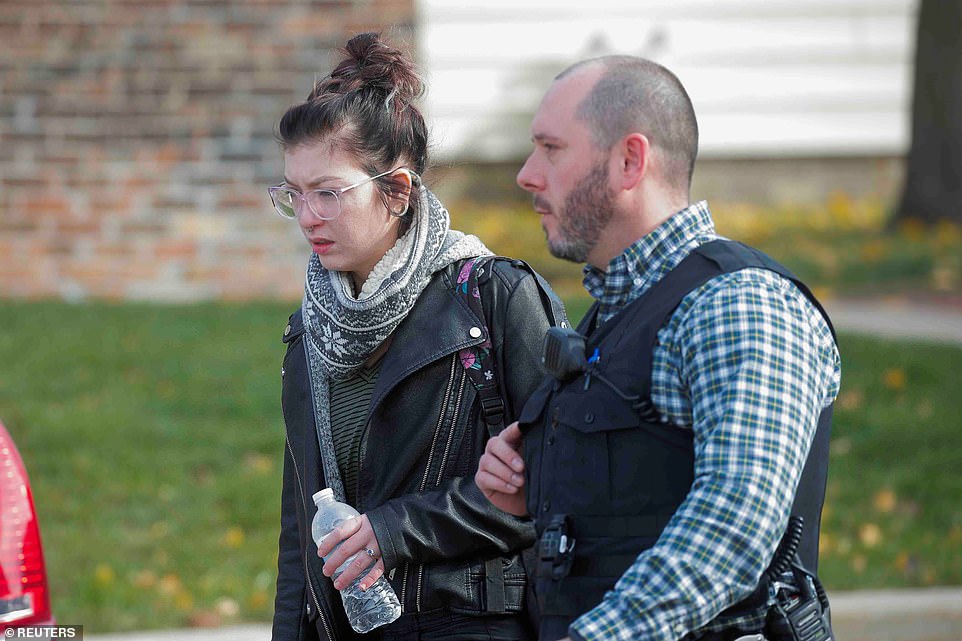 Hannah Gittings, girlfriend of victim Anthony Huber, walks outside the Kenosha County Courthouse, after the verdict 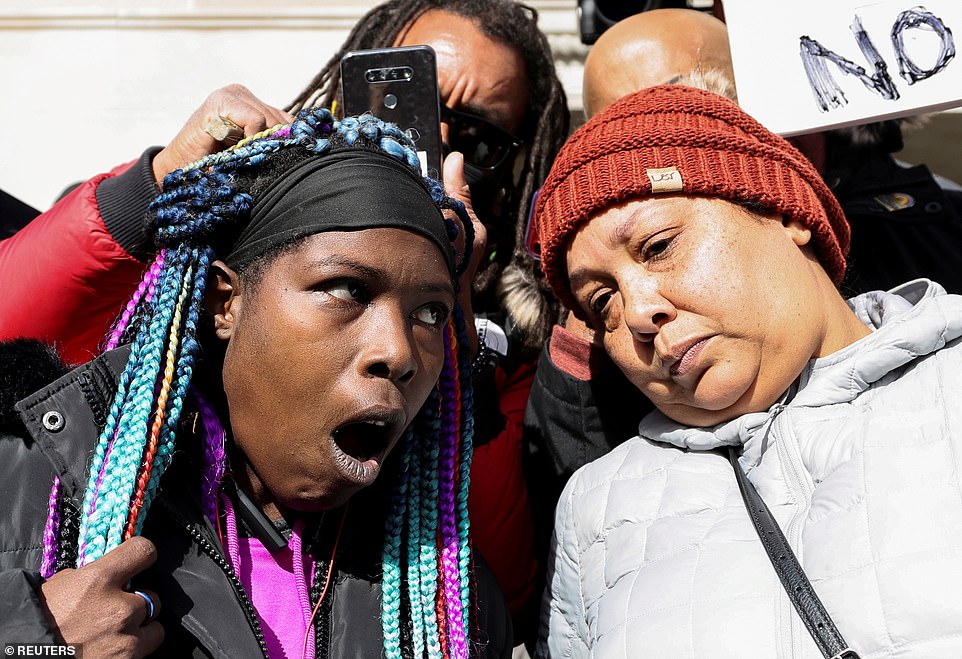 Tanya McLean, aunt of Jacob Blake, reacts to the verdict in the trial of Kyle Rittenhouse 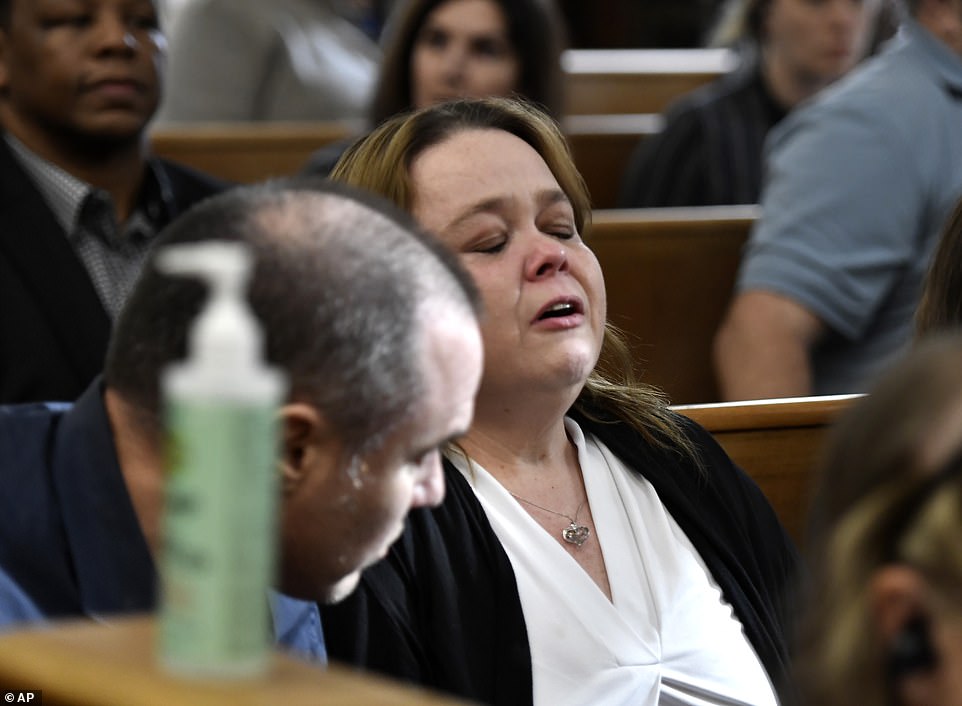 Kyle Rittenhouse’s mother, Wendy Rittenhouse, reacts as her son is found not guilty on all counts at the Kenosha County Courthouse

Amid a heavy law enforcement presence, several dozen protesters lined the steps outside the courthouse after the verdict was read, some carrying placards in support of Rittenhouse and others expressing disappointment.

‘We are all so very happy that Kyle can live his life as a free and innocent man, but in this whole situation there are no winners, there are two people who lost their lives and that’s not lost on us at all,’ David Hancock, a spokesperson for the Rittenhouse family, told Reuters.

Rittenhouse testified in his own defense last Wednesday in the trial’s most dramatic moment – a risky decision by his lawyers given his youth and the prospect of tough prosecution cross-examination.

The teen broke down sobbing at one point but emphasized that he fired upon the men only after being attacked.

‘I did what I had to do to stop the person who was attacking me,’ he said.

Rittenhouse testified that he shot Huber after he had struck him with a skateboard and pulled on his weapon.

He said he fired on Grosskreutz after the man pointed the pistol he was carrying at the teenager – an assertion Grosskreutz acknowledged under questioning from the defense.

Rittenhouse testified that he shot Rosenbaum after the man chased him and grabbed his gun. 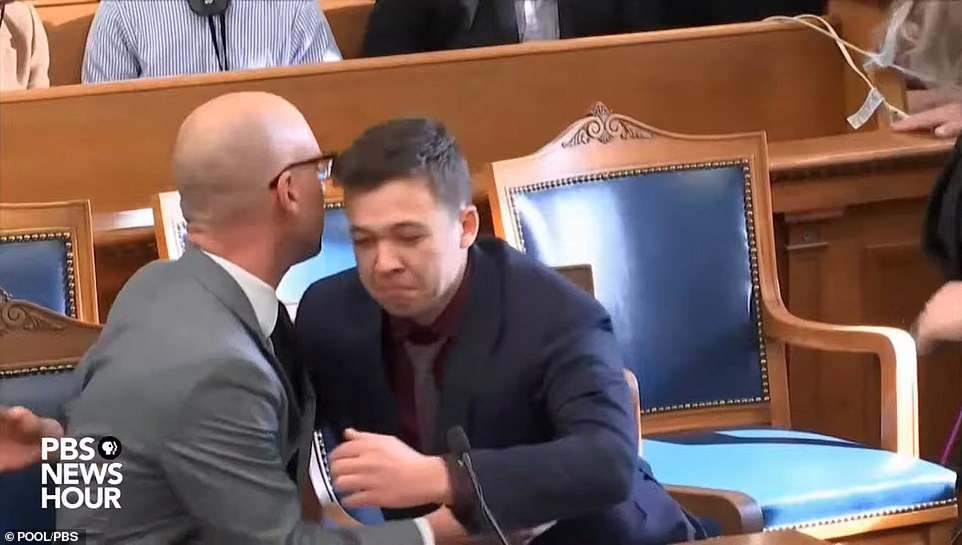 Kyle Rittenhouse reacts to the not guilty verdict on Thursday. He testified that he acted in self-defense 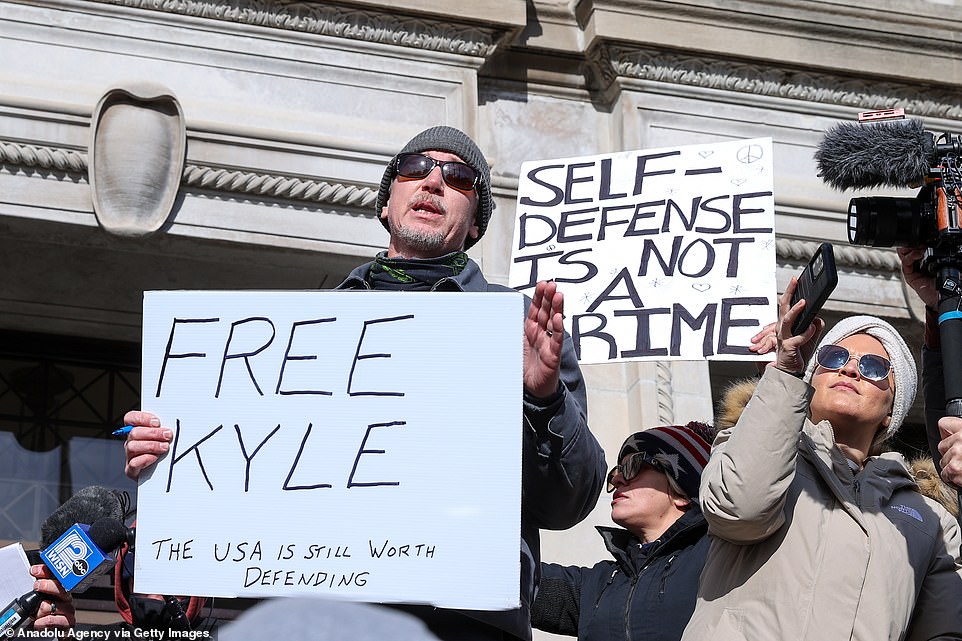 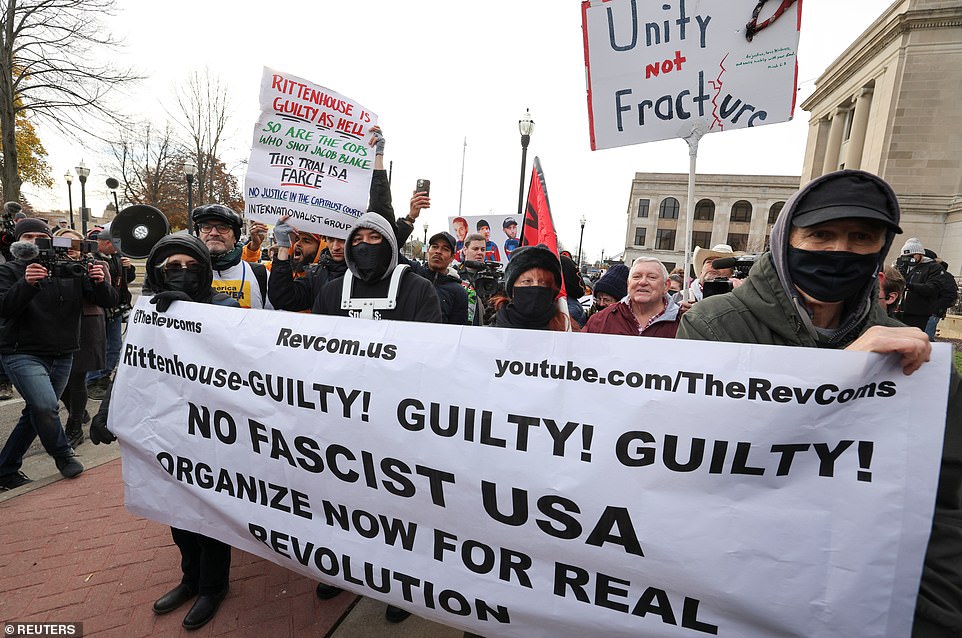 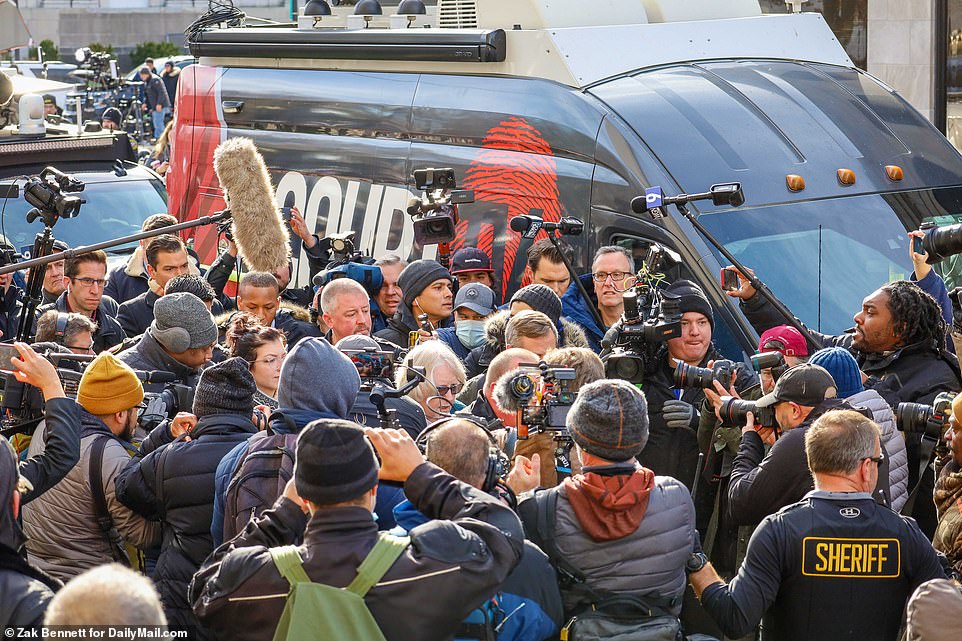 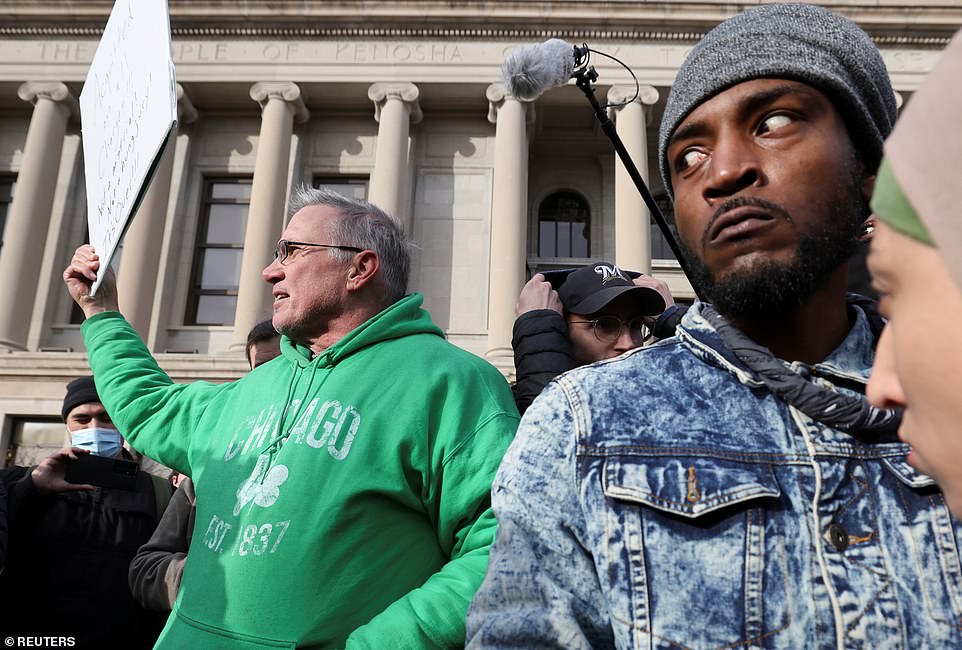 People react to the verdict in the trial of Kyle Rittenhouse, outside the Kenosha County Courthouse in Kenosha, Wisconsin

President Joe Biden, who during last year’s election campaign tweeted a video that appeared to link Rittenhouse to white supremacists, said on Friday he supported the jury’s decision.

But elsewhere reaction showed deep partisan divisions. It was greeted with outrage by many on the political left and celebrated by gun rights supporters.

‘It is unconscionable our justice system would allow an armed vigilante … to go free,’ the Congressional Black Caucus said in a statement.

The thorny issue of race also hung over the case, although Rittenhouse and the men he shot were all white. Some Black activists said on Friday the U.S. police and courts would have treated the teenager more harshly if he had been Black.

But conservatives saw the verdict as a validation of the U.S. Constitution’s Second Amendment, which grants Americans the right to bear arms.

U.S. congressman Madison Cawthorn, a Republican representative from North Carolina, said on Instagram: ‘Kyle Rittenhouse is not guilty my friends. You have a right to defend yourselves. Be armed, be dangerous and be moral.’ 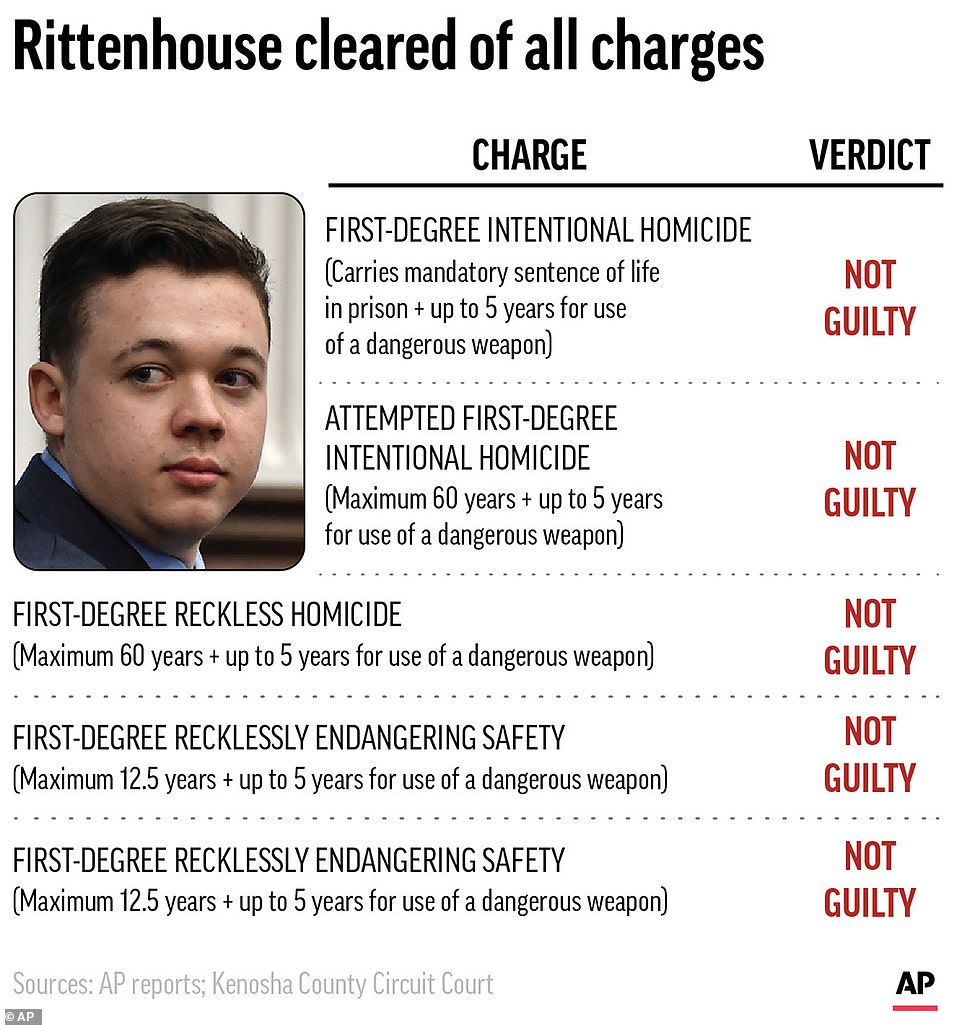