Only one in 71 adults has a little-known type of insurance that covers bills if they become too sick to work – far fewer than the number who pay to protect their pets and even their mobile phones.

But when tragedy strikes it is exactly this type of policy that gives a family financial breathing space to cope. This was the reality for Gavin Knocker who credits an income protection policy for allowing him to say a proper goodbye to his dying wife.

The devoted husband, 40, lost his much-loved wife Avril to breast cancer at the beginning of this year. She was aged just 42. The couple have two young boys, Ewen, seven, and five-year-old Joel. Gavin’s claim on his income protection insurance was unusual because it was in his name but he claimed on it when his wife was sick. 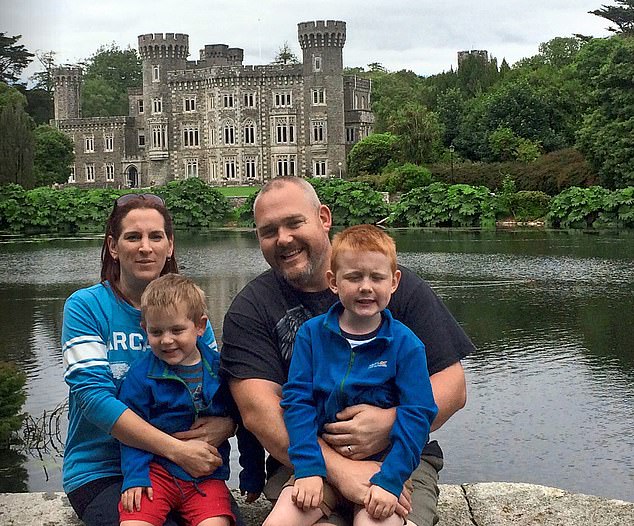 Support: Gavin Knocker, with his late wife Avril and their children Joel and Ewen, was able to claim on an income protection policy

Avril was diagnosed with breast cancer in May last year. She underwent a successful mastectomy and was told the cancer had been caught. With the episode proving a wake-up call, Avril encouraged Gavin to buy income protection that would safeguard the family’s finances should he ever need time off work for major health reasons.

Gavin works as a truck driver and lives with his sons in Belfast. He says: ‘Avril was financially aware and had been nagging me to buy income protection before she got sick, but I forgot to do it. After her surgery she reminded me.’

He went on to use advice service LifeSearch and bought a policy with insurer British Friendly for £16 a month. Just weeks later, in a cruel twist of fate, Avril was told the cancer had spread to her lungs and it was terminal.

Devastated, Avril sank into depression while Gavin cut back to a three-day working week.

He says: ‘She went through hell and tried to take her own life.’

The toll on the family was overwhelming and a doctor signed Gavin off work with stress. He contacted British Friendly, never for one minute believing his insurance would cover his circumstances. But surprisingly it did – because stress was included in the policy and was not a pre-existing condition.

Gavin says: ‘We gave British Friendly access to my wife’s medical records and it could see we had bought the policy in good faith when we thought she had the all-clear and we were happily making plans for the future.’

The successful claim meant the family received £1,200 a month and Gavin did not have to worry about going to work while taking care of his family. ‘I cannot emphasise enough how much the policy helped us,’ says Gavin. ‘It gave me time to say goodbye to Avril and to prepare the boys.’

Gavin returned to work in spring this year which meant his policy stopped paying out a month before it would have anyway – payouts were restricted to one year.

But a couple of days later he got a call from British Friendly to say he was also due a £3,500 bereavement payment. ‘I now encourage work colleagues to look at this kind of insurance,’ says Gavin.

PEOPLE ARE LIVING ON A FINANCIAL KNIFE-EDGE

But workers generally lack financial protection with more than half of adults having no cover at all.

This is a result of lack of awareness, overestimating the extent to which an employer or the State will provide, worries over cost and believing that any future claims will not be met.

London-based financial adviser Drewberry recently asked 3,000 workers for their take on protection insurance. Respondents underestimated the chance of dying early and overestimated the cost of cover.

They also assumed that fewer than 38 per cent of life insurance claims were accepted, when the correct figure is nearer 96 per cent.

Tom Conner, a director at Drewberry, says: ‘Despite a sizeable proportion of the population living on a financial knife-edge, the public at large is unfortunately under- prepared to cope with the financial consequences of long-term illness or the unexpected death of the major breadwinner.’

Some policies offer help even if you don’t claim

Anyone buying protection insurance should look beyond price. Many policies offer services that are available to use irrespective of whether a claim is made.

For example, Royal London policies sold through advisers come with an extra called Helping Hand. It provides access to counselling and physiotherapy and is available to family as well as the customer. Scottish Widows protection policies offer access to Red Arc, an independent advice service provided by nurses.

Insurer AIG offers Best Doctors, enabling customers to get a second opinion from a doctor who is a specialist in their chosen field.

Most critical illness policies also cover children. According to Royal London, a claim for a child is the fifth most likely reason for a payout to be triggered – behind cancer, heart attack, stroke and multiple sclerosis.

Jennifer Gilchrist, Royal London’s protection insurance specialist, says: ‘The number of illnesses specific to children that have been added to the list of those covered by critical illness policies has grown. It is a good development. It is heart-wrenching for children so young to face health issues when their life has not truly started.

‘A critical illness policy will pay out a lump sum so families can take time off to be with their child in hospital.’

Children with a runny nose DON’T have Covid-19, expert warns

Children with a runny nose DON'T have Covid-19, expert warns