A doctor who denies repeatedly groping a woman’s breasts at a busy hospital told a jury today ‘I’m not a monster’.

Dr Kabir Sandhu, 30, allegedly assaulted the woman in the A&E department of St Mary’s Hospital on two occasions, in December 2018 and February 2019.

The doctor claims the allegations are ‘rubbish’ and told jurors the pair kissed four times and it was ‘absolutely consensual.’

Sandhu asked for the woman’s number and she gave it to him ‘freely’ before the pair began exchanging ‘flirtatious’ Whatsapp messages two weeks later, jurors were told. 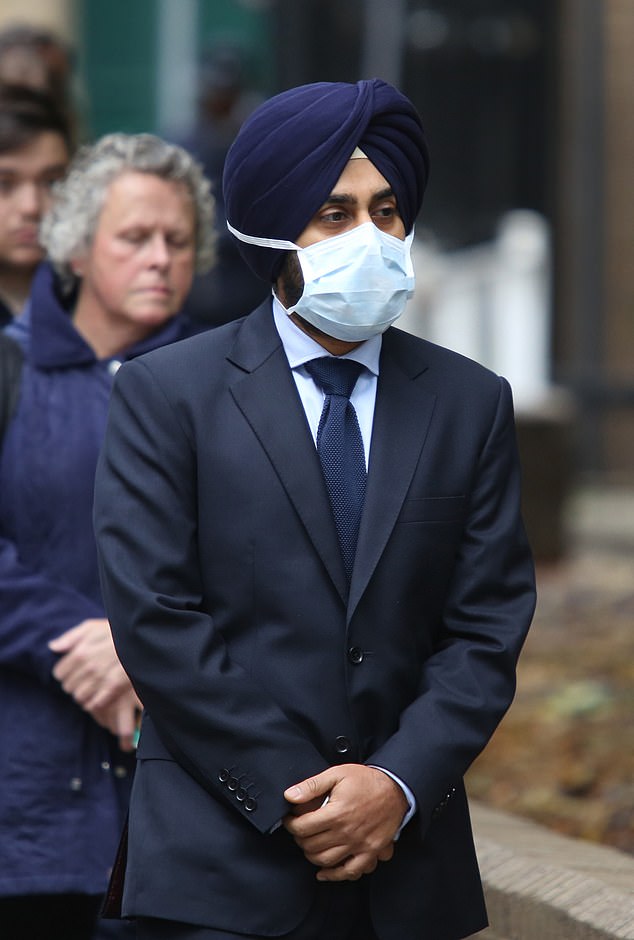 ‘I remember her asking me what my relationship status was and what type of girl I was into.’

The court heard Sandhu bumped into the woman in the corridor of the A&E department and asked her to accompany him on a brief walk on February 2.

His barrister Sarah Forshaw asked: ‘She said that you were insistent, what was true or not true?’

Ms Forshaw asked: ‘Did you sexually assault her on your way to the bridge? True or not true?’

The doctor said: ‘Not true.’

In December 2018 Sandhu is accused of making at least three attempts to touch the woman’s breast over her clothing.

Describing one incident, Sandhu told jurors the woman turned around and gave him a quick peck on the cheek after they were left alone in a room by the hospital porter.

He said: ‘Her left hand swings the door a jar from and open to slightly closed.

‘She gives me a quick peck on the lips, I hold her in and we kiss for a moment and then we leave.

‘It was a natural conclusion. We had been flirting, going the long way to see each other.’

‘No not a change I’m not a monster, I read it exactly as it was.’

Describing a series of allegations, on 2 February 2019, Mr Barton told the jury: ‘He grabbed her breasts through her clothing and said: “Do you have a nipple piercing? Can I see it?”.

‘He took her by the neck, with his hand, not have forcefully, he moved her face towards his and kissed her, again without her consent.

‘He touched her breasts further and he pinched her bottom again.’