By Stephen Adams for The Mail on Sunday

Ethnic groups which have shunned vaccinations may start to see higher covid infection and death rates than the country at large, doctors fear.

NHS figures show that 93 per cent of over-50s have had their first jab, but with much lower take-up rates among Pakistani, Bangladeshi and black Britons, it is thought large numbers in these communities will be left vulnerable to the virus.

Oxford University researcher Dr Nazrul Islam, an expert on how the pandemic has affected different ethnic groups, says the university’s Big Data Unit and the Office of National Statistics are closely examining the situation. 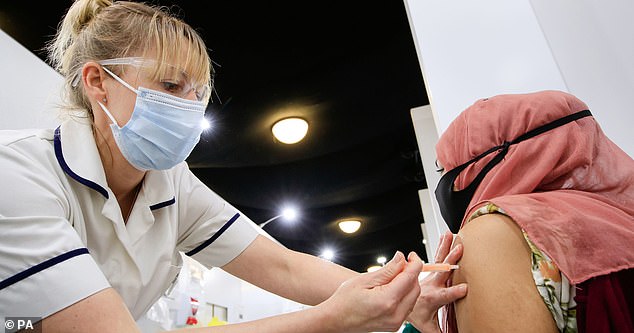 Dr Islam said it was ‘alarming’ that vaccination rates were trailing in some ethnic communities, ‘particularly as these are the groups that have been affected so badly during the pandemic’.

While the full impact of the inoculation programme has yet to be seen in mortality rates, there are hints in the weekly statistics that higher vaccination levels in the white population may already be leading to proportionally fewer deaths.

White patients accounted for between 76 and 79 per cent of all covid deaths in the four weeks from mid-February to mid-March, with the remainder occurring in the non-white population or those whose ethnicity was not recorded. But in the third week of March, that dropped to 73 per cent and then to 70 per cent in the fourth week of the month.

One intensive care consultant said: ‘It makes it hard to comment on [ethnic] sub-groups since the overall numbers coming in are now tiny compared to the beginning of the year.

‘The mix of [intensive care] patients hasn’t changed but… it’s hard to be definitive about this when we’re now admitting a bare handful anyway.’