More than a million people in Greater Manchester are living in boroughs where coronavirus infections are falling, casting serious doubts about whether a ‘Tier Three’ lockdown is really justified.

Some 2.8million residents in the region will be plunged into the harshest category of restrictions at midnight on Thursday after a series of looser localised measures failed to curb a spike in Covid-19 cases that began in mid-September.

The Government said it had to pull the trigger on a Tier Three shutdown – which will see pubs forced to close and mixing between households indoors made prohibited – because modelling by its own scientists concluded that ICU wards in Greater Manchester were ‘two or three weeks’ away from being overwhelmed.

But the average number of cases being recorded each day has been declining in three of 10 Greater Manchester boroughs – home to 1.1million people, or 40 per cent of the region’s population – according to analysis of figures from Public Health England. The promising statistics show the city of Manchester, Stockport and Trafford are all reporting fewer infections than a week ago.

In the case of the city of Manchester — the largest borough with a population of 553,000 — infections have been falling since the beginning of the month. And in the towns and boroughs where cases are still climbing, the rate at which they are increasing has began to decelerate.

The rolling seven-day average number of daily cases in Manchester is currently 333, according to the latest figures up to October 13, the most recent snapshot. This was down 16 per cent on previous week’s 394 and 25 per cent on September 29’s figure of 443. The rolling seven-day average is considered the most accurate way to assess Covid-19 outbreaks because it takes into account day-to-day fluctuations in infections.

Stockport is recording 117 cases per day at the moment, slightly less than the 123 reported the week before (5 per cent). It marks a silver lining for the industrial town, home to 293,000 people, which had seen infections spike by 44 per cent during the first the week of October, when they rose from 85.4.

In Trafford, the rolling seven-day average number of cases currently sits at 108, having fallen 7 per cent from the 116 recorded last week. Like Stockport, the borough saw coronavirus infections surge by 46 per cent in the first week of October, rising from 80.

Six of the seven remaining Greater Manchester boroughs have seen the speed of their outbreak stall significantly following a mid-September surge. Daily infections grew by 20 per cent or less in Rochdale, (16 per cent), Wigan (16 per cent), Tameside (10.6 per cent), Bury (10 per cent), the city of Salford (8.9 per cent) and Oldham (8.2 per cent) in the week ending October 13.

In stark contrast, the average number of daily cases had grown by up to 60 per cent per cent in all six boroughs in the week ending October 6, suggesting the epidemics were already slowing before the latest suite of economically-crippling lockdown measures. Only Bolton is seeing cases continue to spiral, with daily infections having grown 32 per cent in the last week compared to 20 per cent the week prior.

The figures suggest Greater Manchester’s outbreak is slowing, but the region is bracing for an influx of Covid-19 hospitalisations and an uptick in deaths in the coming days and weeks because of the huge rise in cases in late September. This is because it takes about three weeks for patients of the virus to fall severely ill. However the finding that the epidemic up north is shrinking offers a glimmer of hope that the pressure on hospitals will not be as great as officials feared.

In Manchester, infections have been falling since the beginning of the month. The rolling seven-day average number of daily cases in Manchester is currently 333, according to the latest figures up to October 13, the most recent snapshot. This was down 16 per cent on previous week’s 394 cases and 25 per cent on September 29’s figure of 443

Stockport is recording 117 cases per day at the moment, which is slightly less than the 123 daily cases reported the week before (5 per cent). It marks a silver lining for the industrial town, home to 293,000 people, which had seen daily infections spike by 44 per cent between September 29 and October 6, when they rose from 85.4

In Trafford, the rolling seven-day average number of cases sit at 108, having fallen 7 per cent from the 116 recorded last week. Like Stockport, the borough saw infections surge by 46 per cent in the first week of October, rising from 80

The figures are available on the Government’s coronavirus dashboard. They are based on specimen date, which is how many coronavirus samples taken on that day came back as positive.

Specimen date figures lag by around five days because of a delay in analysing tests, which is why the figures can only accurately depict outbreaks in towns and cities up to October 13.

Rochdale and Wigan have both seen daily infections grow by about 16 per cent in the last week, rising from 129.6 to 151.4 and from 183.1 to 212.6, respectively. While it’s true the figures are still trending in the wrong direction, comparing them to the previous week gives plenty of reason to be optimistic.

Between September 29 and October 6, Rochdale’s daily cases soared by 33 per cent from 97 to 129.6. It means the outbreak the growth rate of the outbreak there has been slashed in half in the space of a week.

In Wigan, the difference is even more profound. The town saw cases spike by 68 per cent from 109 to 183 over the same time frame, meaning the speed of growth has shrunk by three-quarters since then.

Bolton is the only Greater Manchester borough which seems to still be spiralling. Daily cases there rose by 20.7 per cent between September 29 and October 6, and jumped 32 per cent the following week. 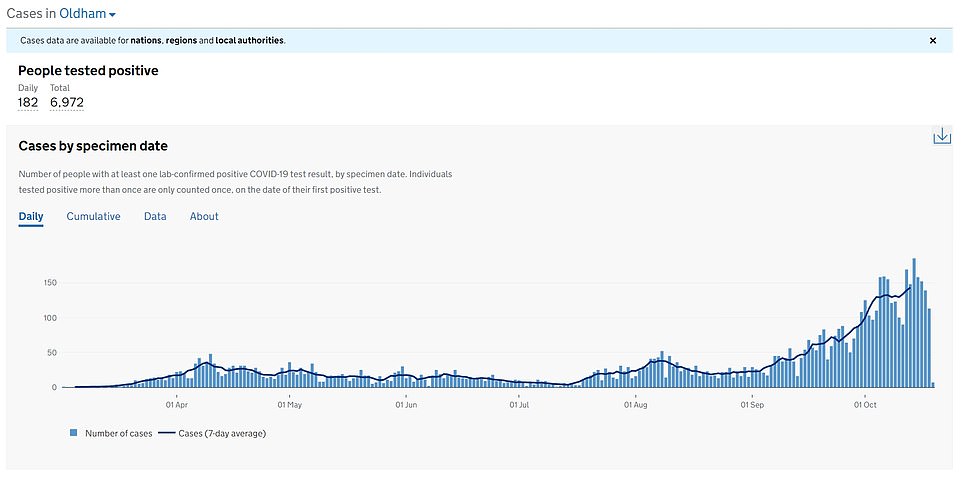 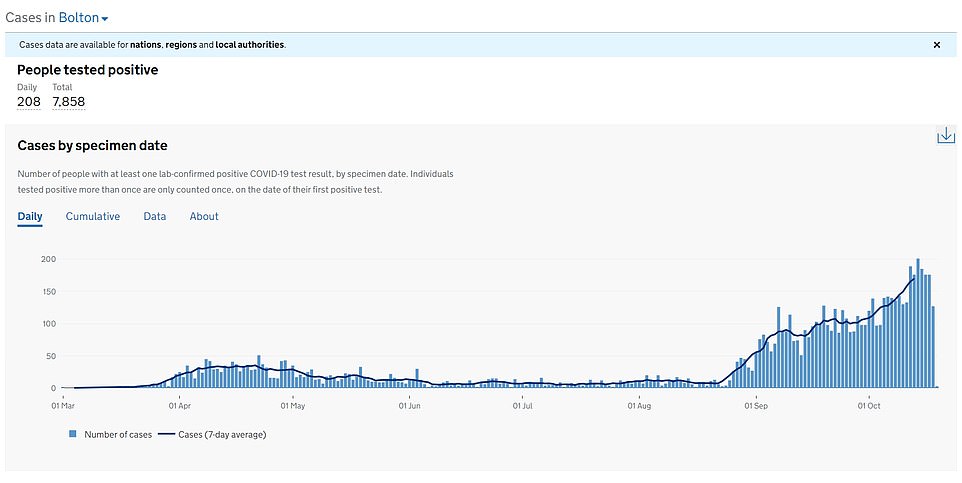 After more than a week of wrangling with local leaders about a financial compensation package in Greater Manchester, the Government last night unilaterally shifted the region to the highest level of curbs.

At midnight on Thursday, the region will be elevated to the very high coronavirus alert level, meaning pubs must shut unless they serve meals, along with betting shops, casinos, bingo halls, gaming centres and soft play areas.

The Tier 3 measures imposed on the region’s 2.8million people could lead to the closure of an estimated 1,800 pubs and 140 wine bars as well as 277 betting shops and 12 casinos, SAYS WHO?.

The region will receive a standard £22million to bolster test and trace infrastructure, but it is feared vulnerable businesses will struggle to stay afloat without urgent support.

Boris Johnson said Greater Manchester mayor Andy Burnham had rejected an offer of £60million business support, on top of the £22million for contact tracing and enforcement.

Whitehall sources said an agreement of £55million was initially reached, but during a final telephone to rubber-stamp the arrangement Mr Burnham blindsided the Prime Minister with a demand for £65million.

The PM tried to compromise on £60million but a government source said: ‘Andy Burnham’s pride got in the way of a deal.’

Another source claimed the mayor had told the PM it was ‘important to him that he got more than Lancashire and Merseyside’, the other two areas already under Tier Three.

Ministers have insisted the £60million package is still on the table but Mr Burnham will need to back down in order to accept the cash.

Last night six Conservative MPs in the region wrote to Mr Burnham asking to stand aside so other local leaders to broker a new deal with the government.

The Prime Minister said he had been left with no choice but to impose the closure of pubs, bars and restaurants as well as banning households from mixing indoors and in most outdoor settings after the Government was unable to reach a deal with local leaders in Manchester.

Mr Johnson said he appreciated the rules are ‘tough, both on businesses and individuals’ but that the move to the Very High alert level is needed in order to combat a surge in coronavirus cases in the region.

He added he regretted the fact the Government had been unable to strike a deal with Mr Burnham because ‘we would have a better chance of defeating the virus if we work together’.

Mr Johnson said ‘unfortunately’ Mr Burnham opted not to accept the deal as he added: ‘Given the public health situation, I must now proceed with moving Greater Manchester, as I say, to the Very High alert level because not to act would put Manchester’s NHS, and the lives of many of Manchester’s residents, at risk.’

Meanwhile, South Yorkshire is being upgraded to Tier Three with a £41million bailout package, it was announced today.

The news was confirmed after ministers hailed ‘very successful’ discussions with local leaders overnight, while talks with Nottinghamshire are still ongoing.

Sheffield’s Labour mayor Dan Jarvis said he had secured a £41million deal for contact tracing, enforcement and business support. Alongside a ban on households mixing indoors, pubs and bars will have to shut from midnight on Saturday, as well as betting shops, casinos and soft plays.

However, gyms and leisure centres can stay open – with Liverpool also getting their rules eased after a protest at double standards between regions. West Yorkshire leaders say they have been told it will not be escalated into Tier Three this week.

Photo contest: The stunning winners of the Aerial Photography Awards 2020