Dominic Cummings claimed today that he ‘screamed’ at Boris Johnson while his chief aide in No10 over the Prime Minister’s insistence that Government policy should ‘follow the bloody media’.

Mr Johnson’s former Svengali made the claim in his latest wide-ranging online revelation about life at the heart of the Government.

He used an ask me anything (AMA) session on the Substack website to reveal that he argued repeatedly with Mr Johnson over how to run the Government.

After running the successful Vote Leave and 2019 General Election campaigns on the basis of ignoring the media, Mr Cummings said he ran into huge opposition when he tried to apply the same methodology afterwards.

Mr Cummings, who was forced out of No10 in December, also used the AMA to renew his red-hot feud with Matt Hancock.

Answering a question on social policy, Mr Cummings claimed the Heath Secretary of Hancock just says nonsense things all the time, I would not infer there is some complex moral reasoning going on!’.

But in comments that will likely cause more angst in Downing Street, Mr Cummings was again scathing about the PM.

He wrote that ‘almost all’ politicians ‘are not just clueless, they aren’t even trying to figure things out or do things well and many of them are just totally fixated on status games in SW1, not helping people’.

He added: ‘Vote Leave won precisely because we did not orient to media but to our best guess of reality – and ditto we won the political game in 2019 for the same reason. But I have had near-zero success in persuading MPs of this!

‘I screamed at the PM a few times – you’re only in this goddamn office BECAUSE WE DIDN’T FOLLOW THE BLOODY MEDIA WHY CAN’T YOU GET THIS THROUGH YOUR HEAD??! 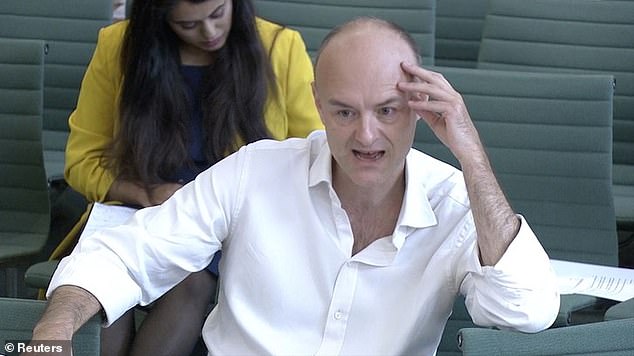 After running the successful Vote Leave and 2019 General Election campaigns on the basis of ignoring the media, Mr Cummings said he ran into huge opposition when he tried to apply the same methodology afterwards. 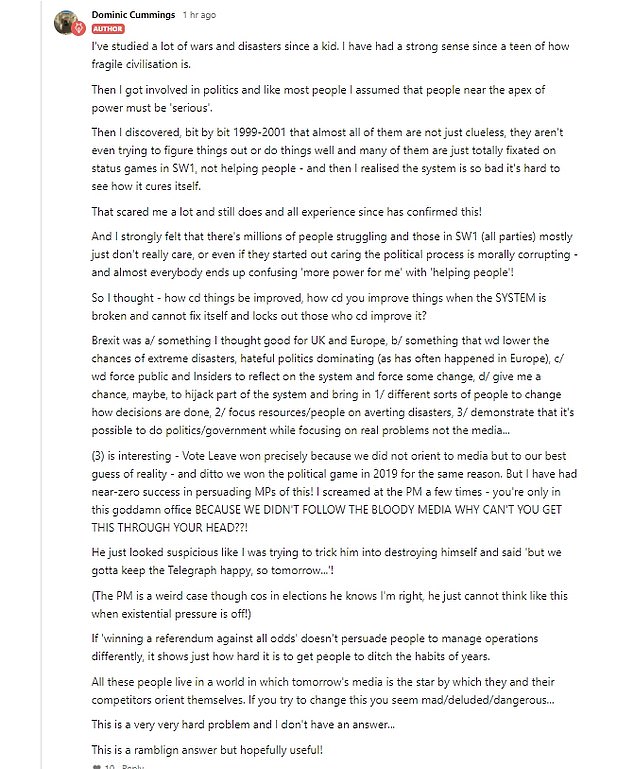 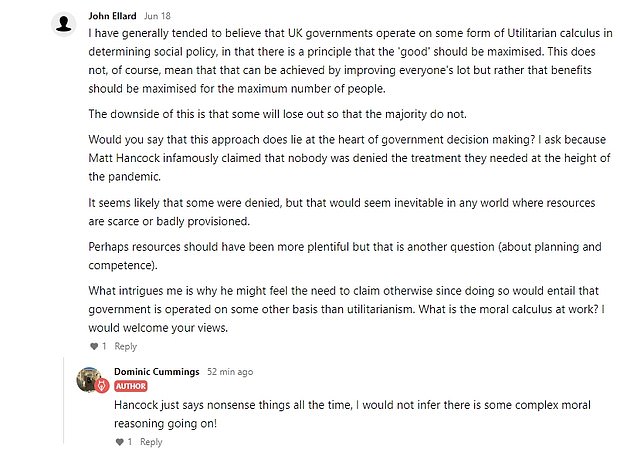 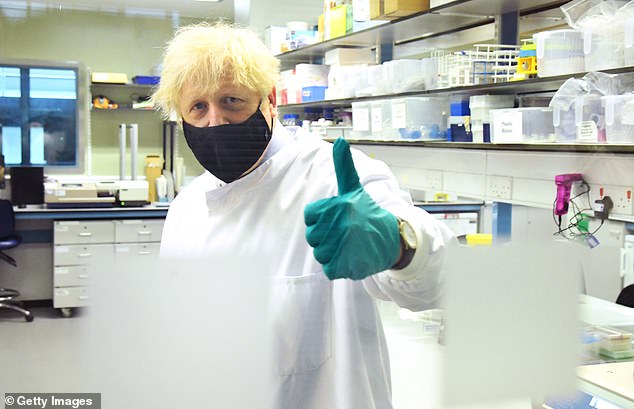 In comments that will likely cause more angst in Downing Street, Mr Cummings was again scathing about the PM (pictured today)

‘I screamed at the PM a few times – you’re only in this goddamn office BECAUSE WE DIDN’T FOLLOW THE BLOODY MEDIA WHY CAN’T YOU GET THIS THROUGH YOUR HEAD??!

‘Hancock just says nonsense things all the time, I would not infer there is some complex moral reasoning going on!’

‘Rubbish leader, no strategy, brains misled by listening to media nonsense for 3 years instead of focusing outside M25.’

‘If you want to study effective action in politics there is no better case study than Bismarck. He was playing a completely different game to eveybody else and you can trace a lot of how he did it and how he thought in the record. It’s also very depressing though – the world does not learn from effectiveness.’

‘He just looked suspicious like I was trying to trick him into destroying himself and said ‘but we gotta keep the Telegraph happy, so tomorrow…’!

‘(The PM is a weird case though cos in elections he knows I’m right, he just cannot think like this when existential pressure is off!)

‘If ”winning a referendum against all odds” doesn’t persuade people to manage operations differently, it shows just how hard it is to get people to ditch the habits of years.’

Boris Johnson’s former chief aide made the comments on Monday in an online question and answer session, which subscribers are required to pay to access, in the latest of his sustained war of words with the Prime Minister.

Mr Cummings called his once long-standing ally Mr Johnson a “gaffe machine” last week, just days after releasing text messages from the early stages of the pandemic in which the Prime Minister was critical of Health Secretary Matt Hancock.

Mr Cummings, who left Downing Street in November following a behind-the-scenes power struggle, recently launched a profile on Substack, a platform that allows people to charge for newsletters.

In response to a question on his experience of being “close to power and the opportunities it provided”, Mr Cummings said: “Fascinating but very troubling.

“The world is so dangerous, there are so many very smart and able people – when you watch the apex of power you feel like ‘If this were broadcast, everyone would sell everything and head for the bunker in the hills’.”

In his latest attack on Whitehall, he added that it is “impossible to describe how horrific decision-making is at the apex of power” and that it is “generally the blind leading the blind”.

Mr Cummings stepped up his bitter war on the ‘gaffe machine’ PM and his ex-colleagues in the online session – which is only open to paying ‘subscribers’.

However, Twitter wags beforehand posed a host of mock questions including: ‘Could you beat Matt Hancock in a fight?’

After a period of silence following his ousting from No10 in November, Mr Cummings has been making up for lost time, with a marathon seven hour diatribe in evidence to a Commons committee last month.

That included allegations that Mr Hancock ‘lied’ about the pandemic response – something the health secretary flatly denies – and that Mr Johnson considered sacking him.

He revealed private messages from the PM last week designed to back up his points.

They showed that in one exchange from March 27 last year, Mr Cummings criticised the Health Secretary over the failure to ramp up testing.

Mr Johnson replied: ‘Totally f****** hopeless.’ He then tried to call his senior aide three times without managing to get through.

Another from the same day saw Mr Cummings complain that the Department of Health had been turning down ventilators because ‘the price has been marked up’. Mr Johnson said: ‘It’s Hancock. He has been hopeless.’

On April 27, Mr Johnson apparently messaged Mr Cummings to say that PPE was a ‘disaster’, suggesting that Michael Gove should take charge instead.

‘I can’t think of anything except taking Hancock off and putting Gove on.’

Mr Cummings dropped the incendiary revelations in a lengthy post on the Substack blogging platform just minutes before PMQs – the same place he will be answering questions.

The post also featured vicious passages condemning Mr Johnson for ‘telling rambling stories and jokes’ instead of chairing crucial meetings properly, and a claim that the PM is intending to quit in order to ‘make money’ rather than serving a full term if he wins the next election.

In another salvo on Friday, Mr Cummings branded Mr Johnson a ‘gaffe machine’ who is ‘clueless about policy and government’.

Mr Cummings highlighted the refusal to put Mr Johnson up for an interview with Andrew Neil, then a feared BBC interrogator and now working for GB News.

The snub caused anger at the time with the premier accused of dodging scrutiny, while Jeremy Corbyn did agree to a grilling.

But Mr Cummings mocked the idea that it was a ‘huge campaign blunder’.

‘Why the f*** wd be put a gaffe machine clueless about policy & government up to be grilled for ages, upside=0 for what?!’ he wrote. 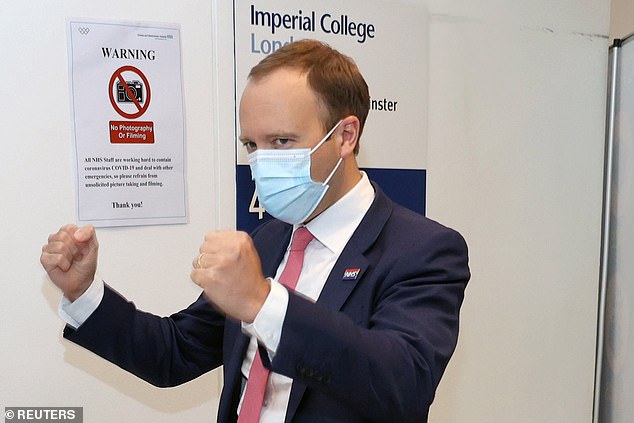 On April 27, Mr Johnson apparently messaged Mr Cummings to say that PPE was a ‘disaster’ 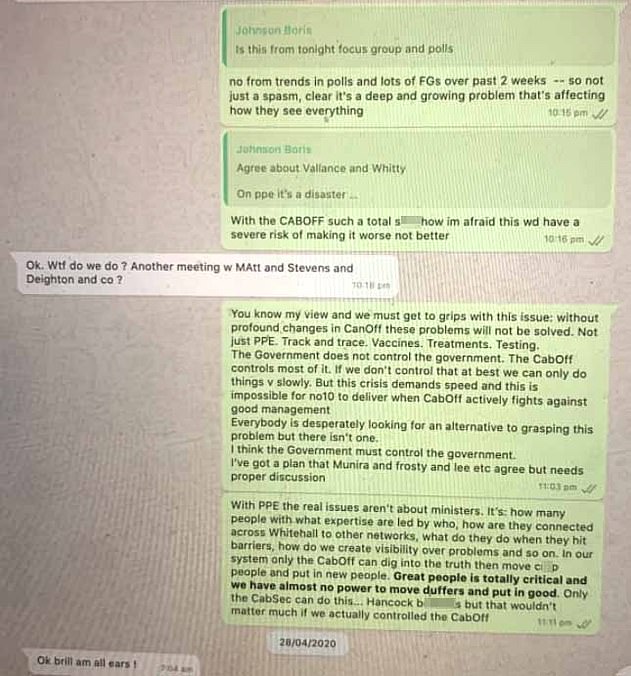 Violence erupted on the streets of Melbourne with tons of of mask-less protesters marching into the CBD because the...

DENTON, Texas (CBSDFW.COM) – It's estimated that ash bushes make up roughly 3% to five% of the overall tree...

Simone Biles has praised a Japanese college for permitting her to make use of its gymnasium facility to coach...