The maverick former No10 chief revealed the extraordinary WhatsApp message on social media as he stepped up his attack on the government.

In an exchange from March 22 last year – the day before lockdown – Mr Cummings criticised the Health Secretary over the failure to ramp up testing.

Another from March 27 saw Mr Cummings complain that the Department of Health had been turning down ventilators because ‘the price has been marked up’.

Mr Johnson replied: ‘It’s Hancock. He has been hopeless.’

On April 27, Mr Johnson apparently messaged Mr Cummings to say that PPE was a ‘disaster’.

‘I can’t think of anything except taking Hancock off and putting Gove on.’

On April 27, Mr Johnson apparently messaged Mr Cummings to say that PPE was a ‘disaster’ 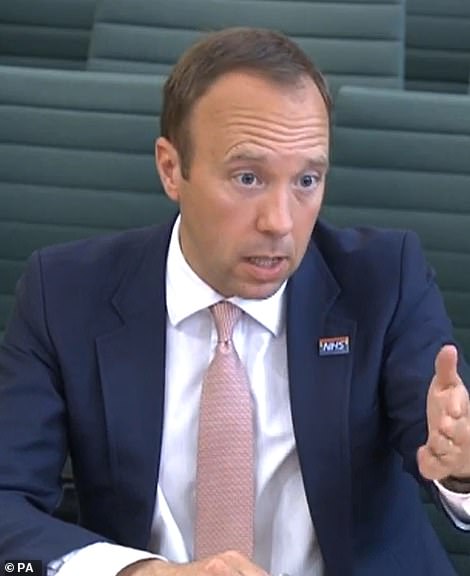 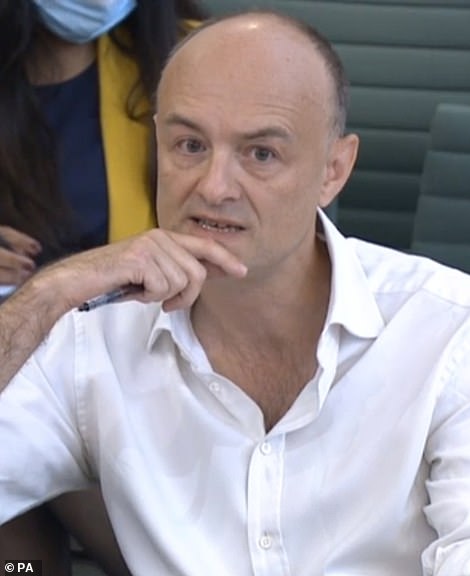 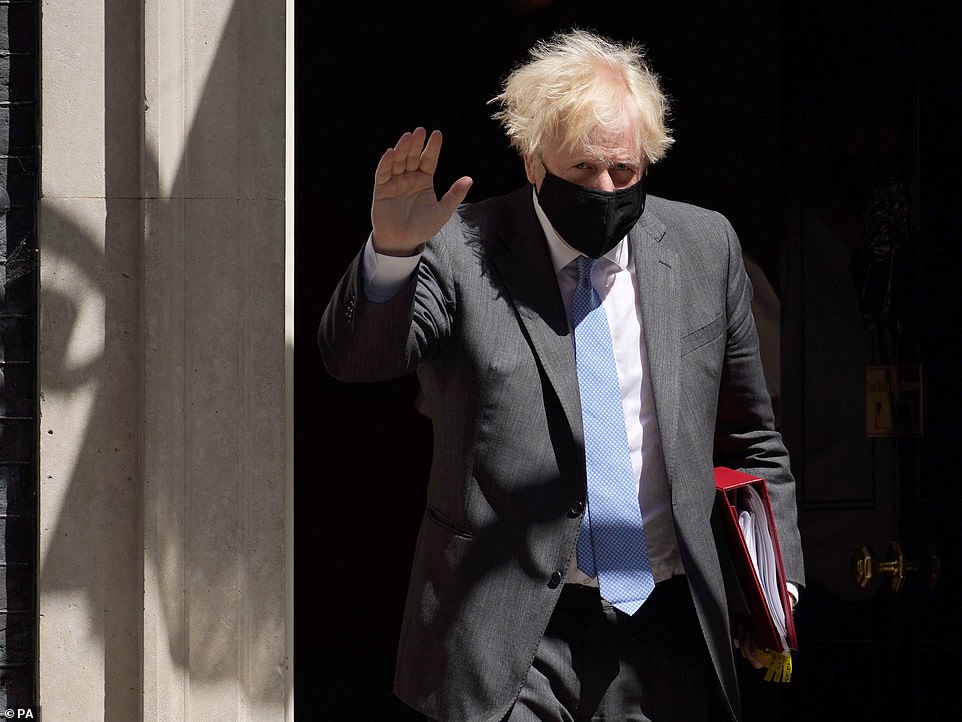 A leaked document gave a glimpse of the UK’s potential ‘new normal’ today with facemasks, working from home and travel quarantine rules set to stay beyond July 19.

The Whitehall paper suggests that the government will stop short of urging workers to return to offices even after ‘Freedom Day’ finally arrives.

There is also a suggestion that face masks will be needed in some settings long-term, as well as keeping post-travel isolation rules.

Anyone who has coronavirus symptoms will still be expected to isolate, according to the draft proposals. And fears have been raised that more restrictions will be needed if the disease surges again in the winter.

The document – seen by Politico – emerged as furious Tories predicted up to 70 MPs could inflict a bloody nose on Boris Johnson in a crunch lockdown vote tonight.

The PM is facing a bruising revolt from his own benches as the Commons is asked to approve the delay of ‘Freedom Day’ until July 19.

Victory is guaranteed for the government as Labour has thrown its backing behind the extension of the brutal restrictions.

The shift from Mr Johnson, amid warnings from scientists that the Indian variant will cause thousands more deaths, has incensed many Conservatives who argue that vaccines have protected the most vulnerable and the country must learn to live with the virus.

Alongside the image of the apparent WhatsApp exchange with Boris Johnson, the Prime Minster’s former chief aide Dominic Cummings tweeted: ‘Evidence on the covid disaster: as the PM said himself, Hancock’s performance on testing, procurement, PPE, care homes etc was ‘totally f***ing hopeless’, & his account to MPs was fiction.’

His message, which was dated March 27 last year and contained several typos, read: ‘US has gone from 2200 tests a fortnight ago to 27,000 a week ago to 100k yesterday. This is what we said we shd do. Instead we are still stuck on about 5-7K and MH saying today he’s ‘sceptical’ about getting to 10k by Monday which he said wd ‘definitely’ happen on Tuesday. This means tens of 1000s of NHS staff arent at work over next critical 3 weeks — apart from my earlier point re testign being integral to escape plan…’

The PM, whose name appeared as Johnson Boris in the screenshot, appeared to reply ‘Totally f***ing hopeless’.

Launching a dramatic bid to bring down the PM and the Health Secretary last month, Mr Cummings blamed a toxic mix of complacency and indecision for the needless deaths.

He told MPs that senior ministers and advisers, including himself, had fallen ‘disastrously short’, adding: ‘When the public needed us most, the Government failed. Tens of thousands of people died, who didn’t need to die.’

In an epic seven-hour performance, Mr Cummings launched attacks on Mr Johnson, his fiancée Carrie Symonds and Mr Hancock over their personal conduct during the crisis.

Mr Cummings claimed the Prime Minister was ‘unfit for the job’ and could not lead Britain out of the pandemic.

He said the Health Secretary ‘should have been fired for at least 15 to 20 things, including lying’.

He alleged Mr Hancock had lied to the PM over the disastrous policy of not testing older people for Covid before they were discharged from hospital into care homes.

The former No10 aide outlined a series of failings by him and the ‘smoking ruin’ Department for Health, including lying in January last year that pandemic preparations were brilliant when they were ‘completely hollow’.

Mr Cummings alleged Mr Hancock lied about testing hospital patients for coronavirus before they were sent back into care homes, in a suggestion that thousands died because of his dishonesty.

He also claimed that the Health Secretary lied about people getting the treatment they needed during the first peak last March and April – adding that ‘many people were left to die in horrific circumstances’.

Mr Cummings then accused Mr Hancock of ‘appalling’ behaviour towards chief medical officer Chris Whitty and chief scientific adviser Patrick Vallance, saying: ‘He used the whole ‘we’re following the science’ as a way so that he could always say, ‘well if things go wrong, we’ll blame the scientists and it’s not my fault’.’

Downing Street has not denied that Mr Johnson considered sacking the Health Secretary in April last year but insisted the Prime Minister has confidence in him now.

Addressing the barrage of claims about his conduct from Mr Cummings at his own evidence session earlier this month, Mr Hancock denied claims that he ‘lied’ to fellow ministers and the public about the coronavirus response.

He replied bluntly ‘No’ when he was asked by science committee chair Greg Clark whether he had misled Boris Johnson about people being tested before returning from hospitals to care homes.

He said he had ‘no idea’ over why Mr Cummings was targeting him specifically over the problems. But he admitted that he knew the PM’s top aide had wanted him sacked because there was ‘briefing to the newspapers’.

He also swiped that government has been functioning much better since Mr Cummings left.

Mr Cummings told the joint committee last month: ‘One thing I can say completely honestly is that I said repeatedly from February/March that if we don’t fire the Secretary of State and get testing into somebody else’s hands, we’re going to kill people and it’s going to be a catastrophe.’

On the claim that Mr Hancock lied, Mr Cummings said: ‘There are numerous examples. In the summer he said that everybody who needed treatment got the treatment they required.

‘He knew that that was a lie because he had been briefed by the chief scientific adviser and the chief medical officer himself about the first peak. We were told explicitly people did not get the treatment they deserved, many people were left to die in horrific circumstances.’

Mr Cummings said he asked the cabinet secretary to investigate, who came back and said ‘it is completely untrue, I have lost confidence in the Secretary of State’s honesty in these meetings’.

The former aide said Mr Hancock’s public promise to deliver 100,000 tests a day by the end of April was ‘incredibly stupid’ because it was already an internal goal.

‘In my opinion he should’ve been fired for that thing alone, and that itself meant the whole of April was hugely disrupted by different parts of Whitehall fundamentally trying to operate in different ways completely because Hancock wanted to be able to go on TV and say ‘look at me and my 100k target’.

‘It was criminal, disgraceful behaviour that caused serious harm.’

There have been reports that Mr Cummings has documents showing the PM’s office summoned Mr Hancock to No10 on May 3 last year, for a meeting the following day, to explain misleading him, the PM and then Cabinet Secretary Mark Sedwill on the testing of patients before discharge into care homes, as well as about further testing of residents and staff.

The DoH said it ‘did not recognise’ the claim and Mr Hancock ‘had many meetings with the PM across a range of issues’. 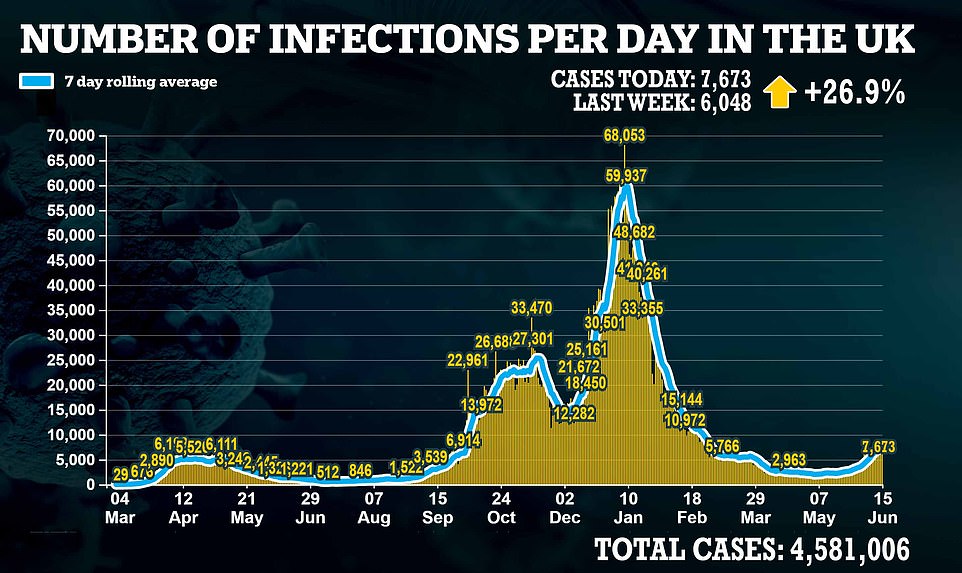 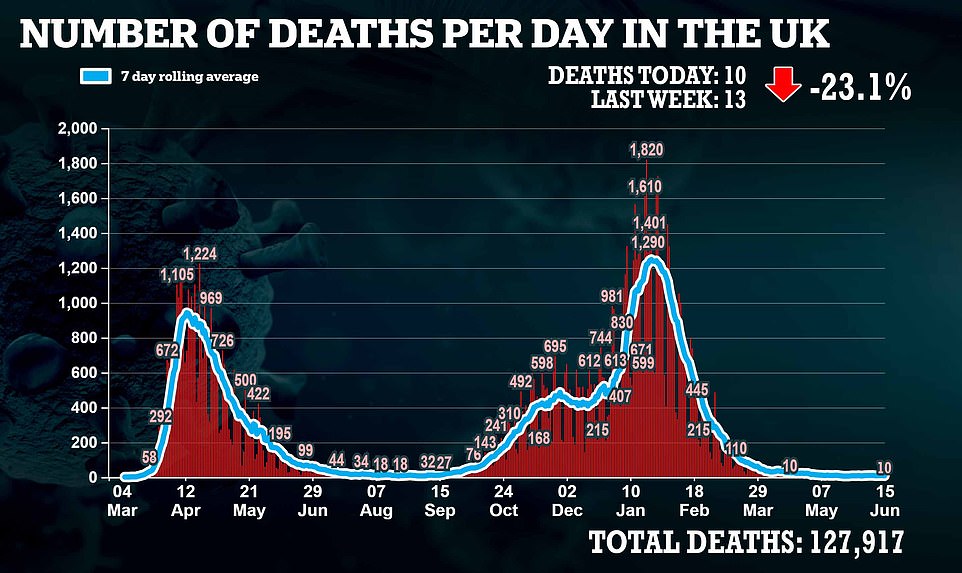 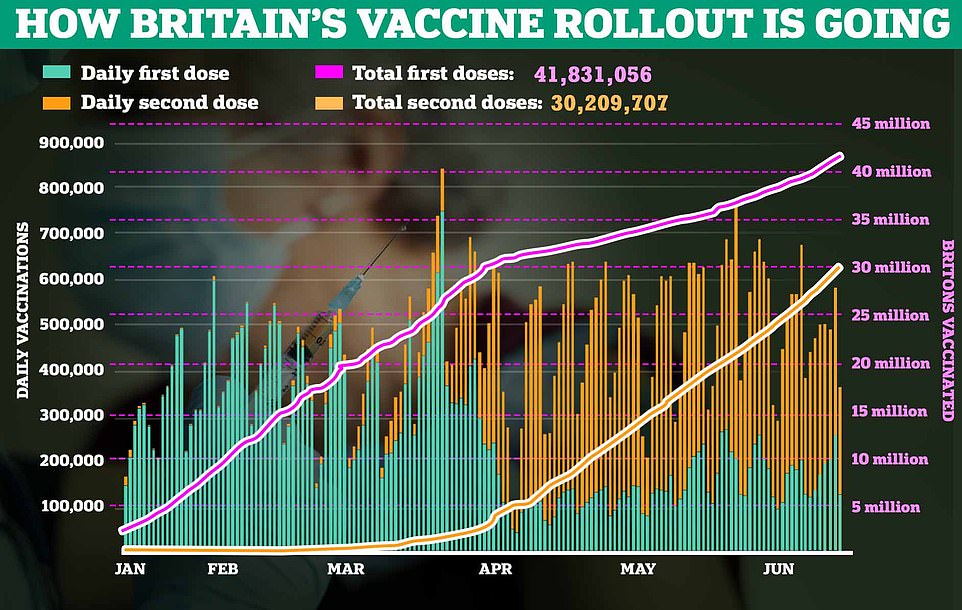 ‘Now when it comes to the testing of people as they left hospital and went into care homes, we committed to building the testing capacity to allow that to happen.

‘Of course it then takes time to build testing capacity.

‘In fact, one of the critical things we did was set the 100,000 target back then to make sure we built that testing capacity and it was very effective in doing so.

‘And then we were able to introduce the policy of testing everybody before going into care homes, but we could only do that once we had the testing capacity which I had to build, because we didn’t have it in this country from the start.

‘And we set all of this out at the time in public documents. It’s all a matter of public record.’

Mr Johnson has said the government faced an ‘incredibly difficult series of decisions, none of which we have taken lightly’ and ‘at every stage we have been governed by a determination to protect life’.