No matter which political party is in power, it seems one thing will never change. We will continue to get gimmicky policies designed to persuade the British people to lose weight.

And, more likely than not, they will be the same gimmicks which were either tried ineffectually before, or never got beyond the announcement stage.

So, for example, last week the Minister for Public Health, Jo Churchill, proclaimed that her department was setting up a ‘new pilot scheme’ that would ‘focus on incentives and rewards for healthy behaviours’.

These, she said, might well include ‘vouchers, merchandise, discounts and gift cards’. Yes, the taxpayer will be funding presents for the allegedly reformed ex-gluttons. 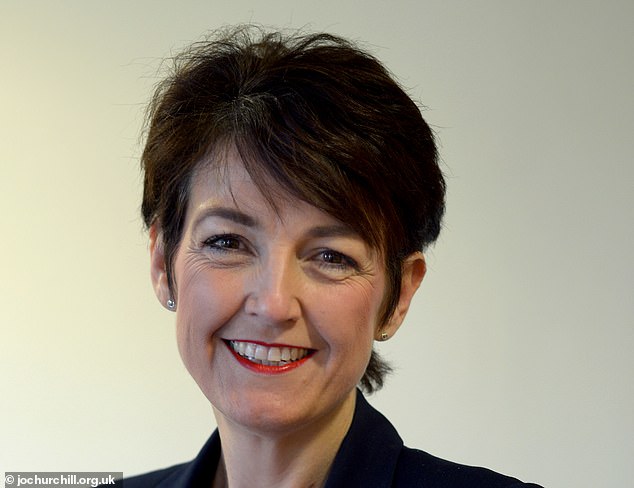 Last week the Minister for Public Health, Jo Churchill, proclaimed that her department was setting up a ‘new pilot scheme’ that would ‘focus on incentives and rewards for healthy behaviours’

In the sort of language which has become tiresomely familiar from the Johnson administration, the Department of Health declared this was ‘part of our world-leading healthy weight strategy’.

Yes, the whole planet is gasping in admiration at our Government’s brilliance at getting the British public to shed the pounds. Or possibly not.

It was another Johnson — the then Labour Health Secretary, Alan Johnson — who, in January 2008, launched a policy described as ‘giving the overweight financial incentives to maintain a healthy lifestyle. The strategy recommends issuing vouchers to the overweight to spend on healthy food in supermarkets’.

One Indian newspaper, with scarcely disguised astonishment, reported that ‘the British Government has suggested that those who manage to lose weight could be given cash prizes’.

Of course, none of it got off the ground. We’ll see if the same healthy eating gimmick, claimed as entirely original by the current lot, gets any further than a press release.

Something similar was also set out in 2013 by Westminster Council, following recommendations by the Local Government Information Unit.

It proposed that residents might suffer a loss of benefits if they refused to follow their doctors’ recommendations to improve their health through dieting and exercise, and an increase in their handouts if they were exceptionally diligent in following the advice.

That never happened either — not least because the doctors themselves said it was a stupid idea.

I wrote at the time that this incentive plan was ‘foolery’. Apart from the bureaucracy involved in running such schemes, and the possibilities that they could be gamed (nowadays, it would be easy to get someone else to ‘borrow’ your Fitbit smartwatch and log the exercise you don’t want to do), the whole point of benefits is that they should be calibrated to financial need, not waistlines.

It is, in any case, a pervasive misconception that poverty drives so much of the population to gorge on ‘junk food’. A few years ago, the Institute for Economic Affairs produced a paper, based on data from two of the biggest supermarket chains, which showed that ‘healthy options are mostly cheaper than less healthy alternatives’.

Thus, they pointed out: ‘While £1 will buy you one cheeseburger, that same £1 could buy you a kilo of sweet potatoes, two kilos of carrots, two and a half kilos of pasta, ten apples or seven bananas. And the Government’s daily recommended five portions of fruit and vegetables can cost as little as 30p.’

This was in 2017, admittedly, but the argument holds good.

What people generally want from their food is high flavour and — especially if they lead busy lives or just find cooking a chore — high convenience. It would take much bigger incentives than the taxpayer should be called upon to fund, to bribe millions of us to abandon processed foods and ‘prepared meals’.

Nor are the sums that would allegedly be saved by taxpayers if we all lost a bit of weight as great as you might think.

A year ago, Matt Hancock, the then Health Secretary, launched a scheme in which doctors would have their pay boosted if they increased the number of overweight patients referred to slimming clubs and weight loss programmes. Nice work if you can get it.

Mr Hancock justified this ‘cash for referrals’ gimmick on the grounds that ‘if everyone who is overweight lost 5 lbs, it could save the NHS over £100 million over the next five years’.

Even assuming that figure was not, er, doctored, it’s hardly impressive. The purported savings equate to no more than 67p per taxpayer per year. No one would notice the difference.

If I seem over-dismissive about the influence of financial incentives to get us to lose weight, or eat less fattening foods, it is based on personal experience.

I weigh around 15 st and am 5 ft 10 in tall. According to the BMI index, which, for better or worse, is the accepted calculator for such deeply intimate matters, that gives me a reading of 30, the point at which one is not merely overweight, but ‘obese’.

Discovering this, my oldest friend, a generous man with concerns about my health, said he would pay hundreds of pounds to any charity I might care to name, for every pound I lost, if I kept the weight off for at least a year. But the other condition was that the payments would be triggered only once I had reached the so-called ‘healthy weight range’ on the BMI index. Unbelievably (at least to me), for a man of my age and height that is between 12 st 7 lb and 9 st 3 lb.

The latter I would regard as preposterous unless I had ambitions to become a jockey; and even the upper end of the range struck me as unimaginably hard to achieve.

This is based in part on the fact that when, at my wife’s insistence, I spent more than a week at a severe health farm in Austria, I lost just two pounds in weight (although thousands in cash). When I returned, she claimed I looked much healthier, which may have been true — but my shape was scarcely altered.

In short, I uncharitably turned down my friend’s proposal as I didn’t want any good cause to suffer the inevitable disappointment of my failure to hit the target.

Even if he had said the money would go into my own pocket, to spend as I’d wish, I still would have baulked at what my friend optimistically called the Dominic Weight Loss Project.

T he thing is, I get more pleasure than I can put into words from the fattiest meat and the creamiest cheeses. Perhaps it would be different if I were financially hard-pressed; but, as things are, almost no amount of pecuniary inducement would compel me to give up those delights.

Eight years ago, I did pay a price: in pain. I developed the excruciating condition known as renal colic, which occurs when kidney stones break free and become lodged in the urinary tract. They were too big ‘to pass’, so it required an operation to remove them.

The surgeon, Mr Alastair Henderson, duly subjected what he had extracted to chemical analysis, and informed me that my ‘stones’ were the sort invariably associated with an over-rich diet. He recommended that I become largely, if not entirely, vegetarian.

I promised Mr Henderson that I would do no such thing. Possibly to his surprise, I declared that though the agony of renal colic was worse than anything I had ever experienced (one woman told me that she had found this condition more painful than natural childbirth), I would rather risk a re-occurrence than give up the foods I adore, in the quantities I like.

Perhaps I am at the extreme end of the gluttony scale, but I suspect the millions of overweight people the Government appears to be targeting with its latest gimmick have a similar psychology.

It may well be that this scheme originates in Downing Street’s so-called ‘nudge unit’, which attempts to apply behavioural psychology to Government policy.

If so, this is a ‘nudge’ nowhere near hard enough to shift those of us most dedicated to what the great French gourmet, Jean Brillat-Savarin, called ‘the pleasures of the table’. He was a politician, too. But one who knew what he was talking about.

Video emerges of mass protests against communist dictatorship in Cuba: 'We are not afraid'

GREG DYKE: Sadly it was not to be, but something long pent-up in the English soul has been released

Product Identify: Sendley Click here to get Sendley at discounted price while it's still available... All...