As it becomes ever more likely that the winner of the U.S. presidential election on November 3 will be Joseph Robinette Biden, it is natural that the British Government should be increasingly obsessed with what this would mean for the Anglo-American relationship — particularly at the highest level.

The relationship between Biden and Boris Johnson will almost certainly not be as close as that between the Prime Minister and President Trump. The Donald has often spoken admiringly about Johnson (always referring to him as ‘Boris’) and gave him his personal mobile number, on which they talk on a regular basis.

That definitely wasn’t the case when Theresa May was PM. Though as a former U.S. government official told a British journalist: ‘If you had become the British Prime Minister, he would probably have given you his personal cell phone number, too, just because he was so relieved not to deal with Theresa May any more.’

A lot of this is about Brexit. Trump was always a supporter, so Johnson’s leadership of that campaign — and the fact that he was ‘a winner’ — made him one of the good guys. But it goes beyond that. 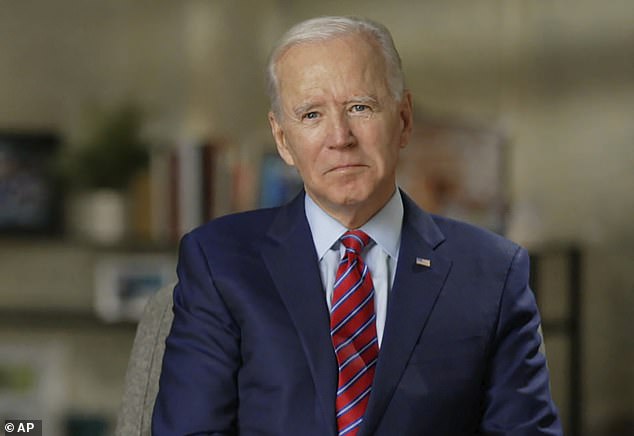 As it becomes ever more likely that the winner of the U.S. presidential election on November 3 will be Joseph Robinette Biden (pictured), it is natural that the British Government should be increasingly obsessed with what this would mean for the Anglo-American relationship — particularly at the highest level, writes DOMINIC LAWSON

Trump, whose mother was born in the UK and who has substantial Scottish investments (in the form of the Turnberry golfing resort), is a visceral Anglophile. This is most unusual in an American president: in fact, I can’t think of a previous one of whom that could be said.

It was not even true of Ronald Reagan, although he developed a close political and personal bond with Margaret Thatcher. Reagan, in fact, had Irish family roots — his great grandfather emigrated from Ballyporeen.

And it is Joe Biden’s passionate identification as an Irish-American (though it is only on his mother’s side, as his father’s family hailed from the very English county of Sussex) which leads many to claim he is ‘anti-British’.

That came to the fore when Johnson announced an ‘Internal Market Bill’ which threatens to abandon certain provisions in the EU withdrawal agreement relating to Northern Ireland. Biden tweeted ominously: ‘Any trade deal between the U.S. and the UK must be contingent upon a respect for the Good Friday agreement and preventing the return of a hard border. Period.’

Yet Biden is certainly not anti-British in the way that, say, the longstanding Republican Congressman Peter King is.

King, the grand-nephew of an IRA member, in 1982 told a pro-IRA rally in his backyard of Long Island: ‘We must pledge ourselves to support those brave men and women who … are carrying forth the struggle against British imperialism in the streets of Belfast and Derry’ 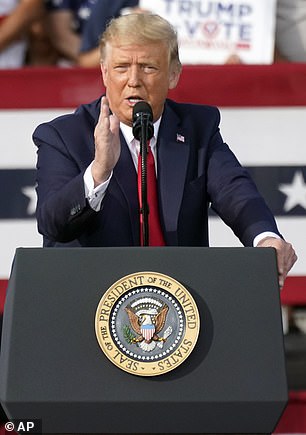 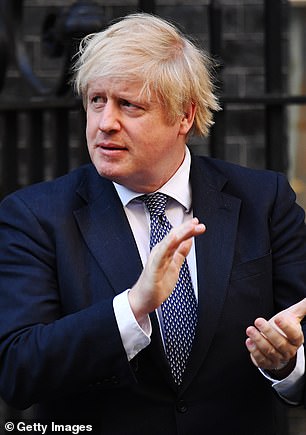 The relationship between Biden and Boris Johnson will almost certainly not be as close as that between the Prime Minister (right) and President Trump (left), writes DOMINIC LAWSON

It was in that same year that Joe Biden, then a member of the U.S. Senate’s Foreign Relations Committee, proved himself one of the staunchest supporters of the British over the Argentine invasion of the Falkland Islands. He was the sponsor of a resolution demanding that Washington declared itself to be on Britain’s side.

At that time, President Reagan was adopting a posture of studied neutrality, as was his Secretary of State, Alexander Haig. And Reagan’s ambassador to the UN, Jeane Kirkpatrick — a particular favourite of the President — was adamantly pro-Buenos Aires in the matter.

On the very night of the invasion, Kirkpatrick demonstrated her sympathies by attending a dinner in her honour thrown by the Argentine ambassador. She declared subsequently that their action was ‘not a military aggression’.

Reagan and Haig, in fact, succeeded in forcing Margaret Thatcher to sign up to a ‘compromise peace plan’ which, to their amazement, General Galtieri would not accept. So the Task Force sailed on, and seized back the islands. The Reagan library 20 years later released a memo from Haig to the President, acknowledging that ‘our proposals, in fact, are a camouflaged transfer of sovereignty, and the Argentine foreign minister knows this, but the junta will not accept it’.

But Senator Biden, in a TV interview at the time, declared: ‘My resolution calls for the United States to state whose side we are on — the British side. The Argentines must be disabused of this notion that the U.S. is neutral in this matter. It is clear that Argentina is the aggressor. It is clear that Britain is right and it should be clear to the whole world where the U.S. stands.’

Asked by his interviewer whether this might not lose the good opinions of The Organisation of American States, which had passed a resolution in support of Argentina, Biden riposted: ‘We lose a great deal more by not standing with our oldest and closest ally.’ 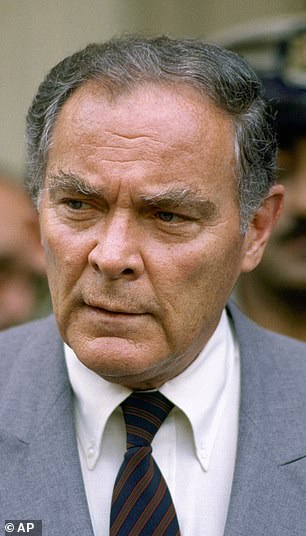 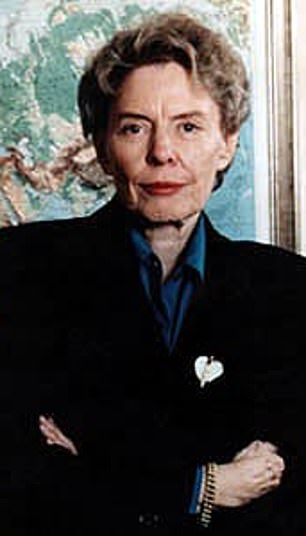 At the time of the Argentine invasion of the Falkland Islands, President Reagan was adopting a posture of studied neutrality, as was his Secretary of State, Alexander Haig (left). And Reagan’s ambassador to the UN, Jeane Kirkpatrick (right) — a particular favourite of the President — was adamantly pro-Buenos Aires in the matter, writes DOMINIC LAWSON

When Lady Thatcher died, Biden went to the British Embassy in Washington to sign the condolence book. Talking to our then ambassador, Sir Peter Westmacott, Biden reminisced warmly about the events of 1982 and Thatcher’s appearance before his committee (‘She was very, very persuasive, very effective, quite a lady’).

This, perhaps, is why Sir Peter recently pointed out to the New York Times that Biden ‘is instinctively comfortable with Brits’.

However, as he also observed: ‘It will not be lost on Biden that the last two British PMs went out of their way to be nice to and about Trump.’

It is also true that Biden has none of Trump’s frequently stated desire to rush through a free-trade deal with the UK. But there may be a back door to something like it, which could never happen under Trump.

Biden has indicated that he might restore President Obama’s plans for the U.S. to join the Pacific free-trade area, known as the Comprehensive and Progressive Agreement for Trans-Pacific Partnership (CPTPP). And, under the International Trade Secretary Liz Truss, the UK has already opened discussions with the existing CPTPP members, ahead of a formal UK application to join.

So there may not need to be a bespoke U.S./UK trade deal.

Sure, Joe Biden will never be a fan of Brexit (he’s said as much). But the idea that he’s anti-British is simply not justified by his record.

MY WIFE SCORES A WIN IN OUR SEASONAL BATTLE

Across Europe, those who like bracing weather indoors as well as out have found an unlikely ally in the form of coronavirus policy.

To be specific, governments have declared that since the virus seems to thrive most in enclosed environments, we should do whatever we can to allow fresh air to circulate, however chilly it might be.

In Germany, the schools have been asked to throw open all their windows, and the children instructed to dress accordingly — wearing their coats in the classroom, if necessary.

Here, train operators have been told to open windows and doors (where possible). The message to commuters is: draughts are good for your health. 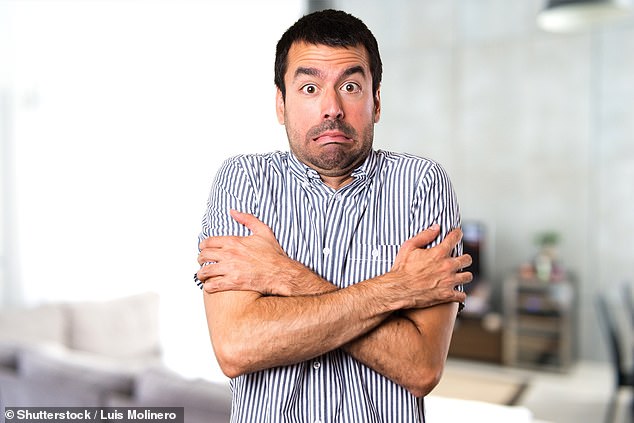 Governments have declared that since the virus seems to thrive most in enclosed environments, we should do whatever we can to allow fresh air to circulate, however chilly it might be, writes DOMINIC LAWSON

This campaign has tilted the seasonal battle in our home against me. Like many households, ours has long been split by opposite opinions on this question.

My wife, even in winter, likes windows to be open. I, meanwhile, prefer the domestic environment to be warm and snug.

To my wife’s inevitable complaint that ‘it’s horribly stuffy in here’, I would always retort that lots of people freeze to death in winter but no one has ever died from a bad smell. Now, unfortunately, she can respond that the medical consensus on Covid infection pathways has settled the issue in her favour.

Worse, she has maintained her policy of not allowing the central heating to be turned on until November.

But at least that means that, in a week’s time, I might be able to stop wearing my scarf and gloves indoors.

Covid nurse: 'I thought I wasn't going to make it'

IAN LADYMAN: It’s sad that Arsene Wenger couldn’t see what the rest of us could

At least 50 migrants have died after being abandoned in a truck in San Antonio, Texas, according to a local official. Authorities denounce that the people found had...

Washington plans - within days - to announce the purchase of the anti-aircraft system "NASAMS" developed by Norway, to supply Ukraine with it, according to the American network...

The Oval Office will never be the same. (Watch the video below.)“The Late Late Show” host made an auspicious entrance by delivering an edible arrangement to the commander...

The president is open to ideas: suspend their gas taxes or “find other ways to deliver some relief.” And states have been — pursuing relief checks and other...

James Mattis gets married — leaving behind his mistress, the Maritime Corps

IAN LADYMAN: It's sad that Arsene Wenger couldn't see what the rest of us could