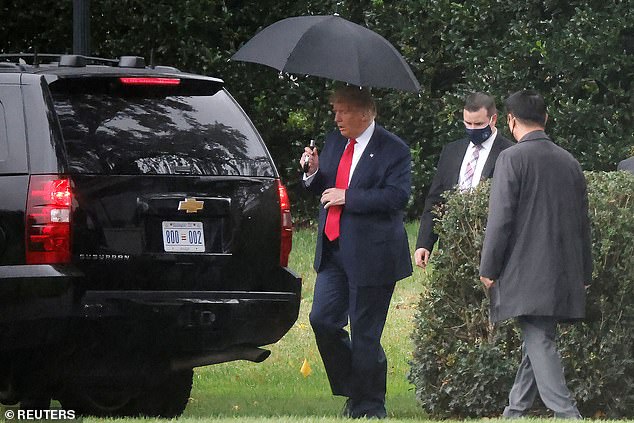 A mask-free Donald Trump departed for Florida on Monday for his first campaign rally after his battle with COVID, where hundreds of supporters awaited him with few wearing face coverings or practicing social distancing.

The president didn’t take questions before he boarded Air Force One for the trip to the Orlando Sanford International Airport, where his mega rally will take place outdoors.

It’s his first trip on the plane since Thursday, October 1, when he attended a fundraiser at his golf club in Bedminister, New Jersey, the day before the White House announced he and the first lady tested positive for the coronavirus.

In Florida, hundreds of supporters waited for the president. They walked in close quarters as they queued up in a line that stretched down the street.

Few were wearing face masks even as COVID cases are on the rise in the state.

Campaign volunteers took temperatures and passed out masks, but the campaign did not require attendees to wear them.

Dr. Anthony Fauci said such rallies are ‘asking for trouble.’

He argued this it the ‘worst time’ to have rallies.

‘When you look at what’s going on in the United States, it’s really very troublesome,’ he told CNN’s Jake Tapper on Monday. ‘A number of states right now are having increase in test positivity.’

Meanwhile, Trump’s personal physician Dr. Sean Conley, released an update on the president’s health before Trump took the stage, stating the president ‘is not infectious to others.’

Conley said President Trump tested negative for COVID on consecutive days but did not specify which dates. The White House still has not answered questions about when the president last tested negative before he was diagnosed with the disease.

President Trump ‘has tested negative, on consecutive days, using the Abbott BinaxNOW antigen card,’ Conely wrote in a memo released by the White House press office ahead of Trump’s rally.

‘It is important to note that this test was not used in isolation for the determination of the President’s current negative status. Repeatedly negative antigen tests, taken in context with additional clinical and laboratory data, including viral load, subgenomic RNA and PCR cycle threshold measurements, as well as ongoing assessment of viral culture data, all indicate a lack of detectable viral replication,’ Conley noted.

‘The comprehensive data, all indicate a lack of detectable viral replication. This comprehensive data, in concert with the CDC’s guidelines for removal of transmission-based precautions, have informed our medical team’s assessment that the president is not infectious to others,’ he concluded.

President Donald Trump leaves the White House for Florida on Monday afternoon; it was raining and the president was not wearing a face mask 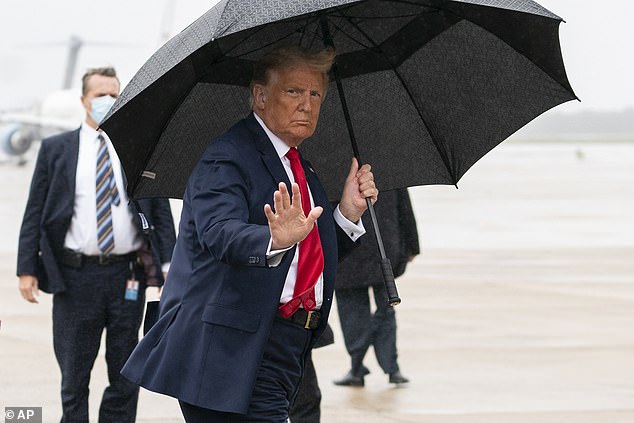 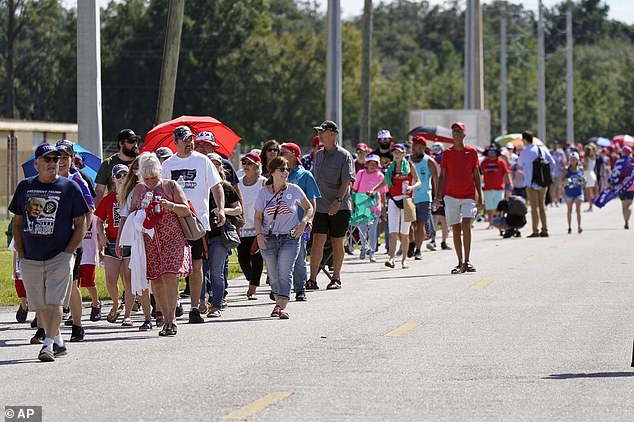 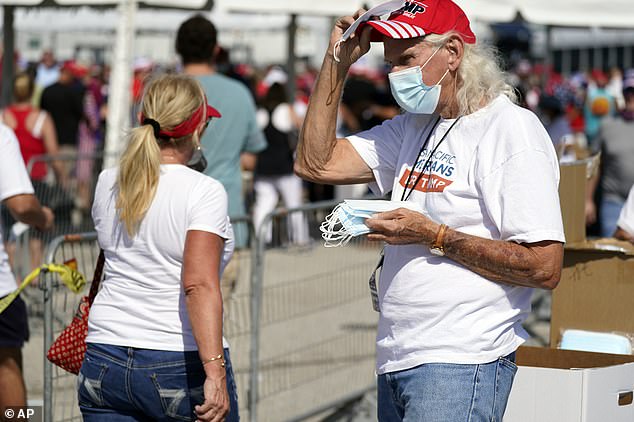 A women, refuses a mask, as she walks by a worker handing out them out ahead of Trump’s rally 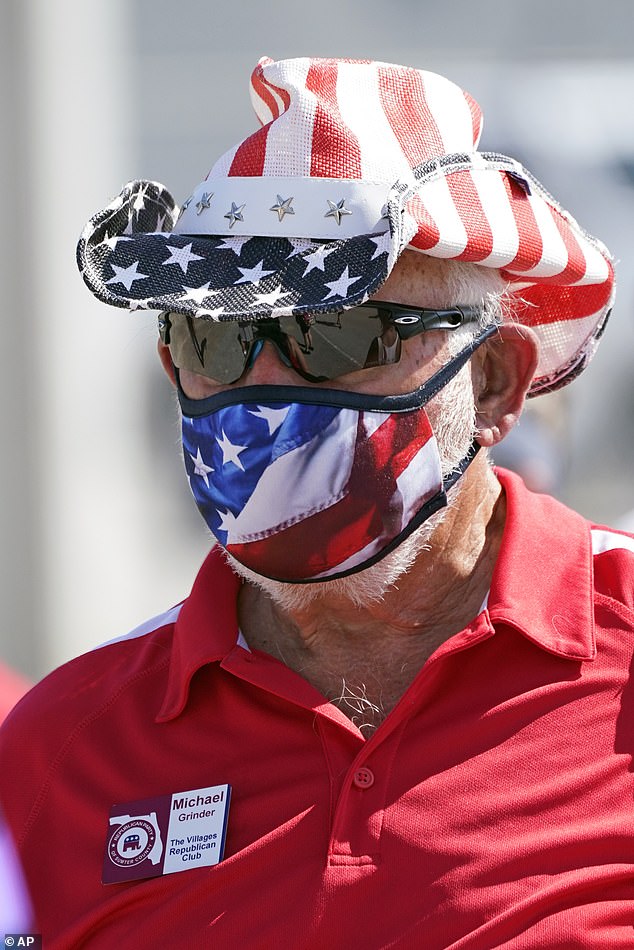 Michael Grinder, of The Villages, waits in line to enter the president’s rally

Photos on social media of the rally setup showed rows of chairs lined up next to one another with little social distancing.

Additionally, there will be no requirement for his supporters to wear masks although White House press secretary Kayleigh McEnany said they will be encouraged to do so.

‘We will have the same policies that we’ve had in place, the campaign has always handed out masks, encouraged people to wear them, provided hand sanitize or. Ultimately, you have a right in this country to show up and express your political viewpoint, that’s why we have peaceful protests. You can’t have one standard for the protesters out there on one side but not for those wanting to express their first amendment rights in support of this president,’ McEnany said on ‘Fox & Friends’ Monday morning.

She remains in quarantine after testing positive for the virus.

Monday marks the start of a vigorous schedule for Trump, 74, who is marking his return to campaign trail since being sidelined with COVID.

One of his top campaign advisers said the president is complaining about not having enough events on his campaign schedule, adding they expect to have two to three or more in the ramp up to November 3.

‘The president, even this morning, in our morning conversation, was getting on my case for not having enough rallies and public events scheduled. So he’s ready to go. I expect to see him out there in the short term two to three events a day and that will grow as we get closer to Election Day,’ Jason Miller, a senior adviser to the Trump campaign, told reporters on a press call. 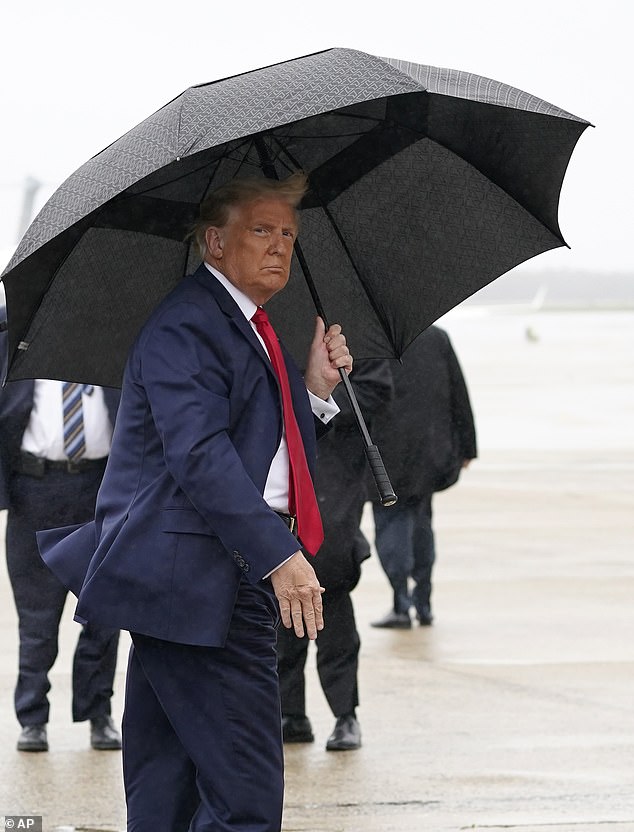 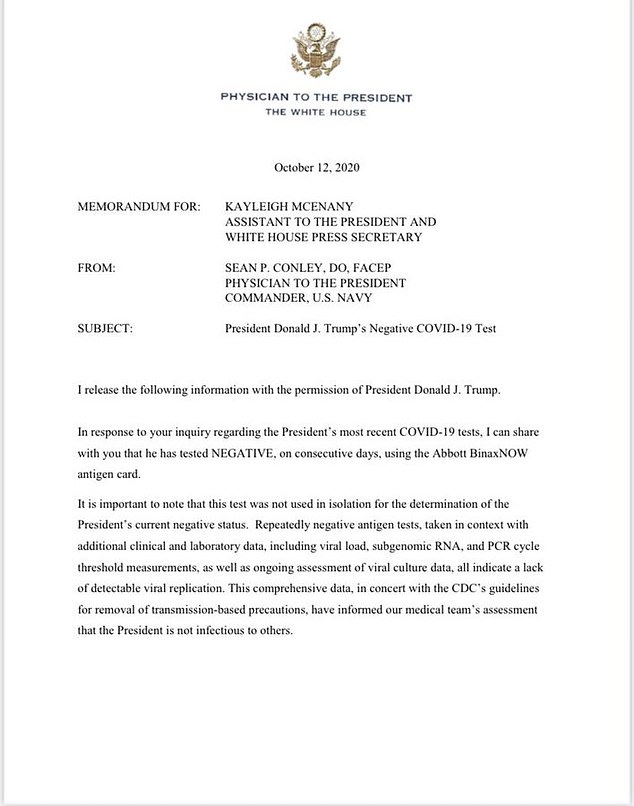 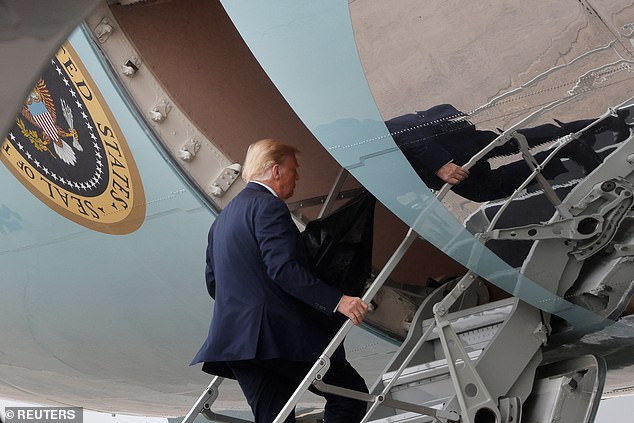 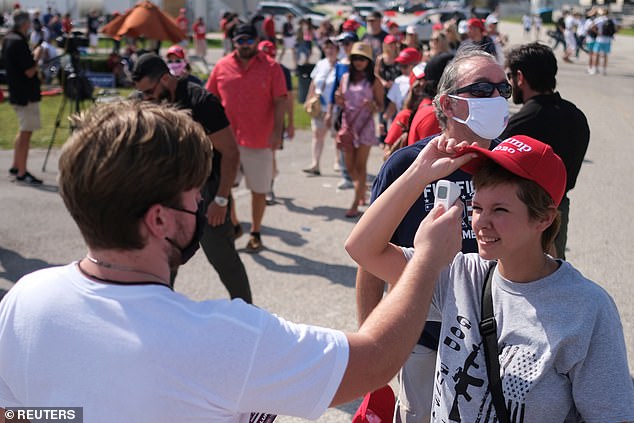 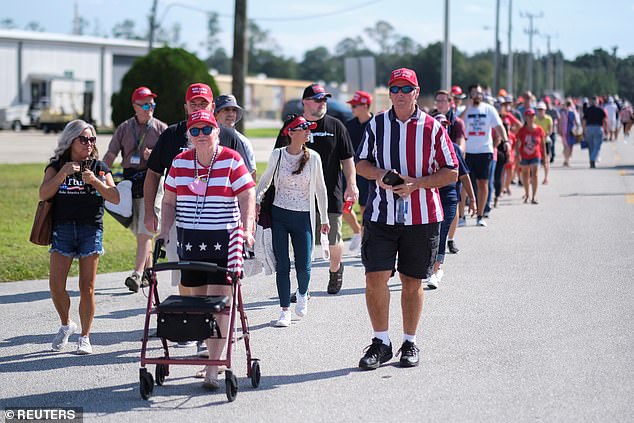 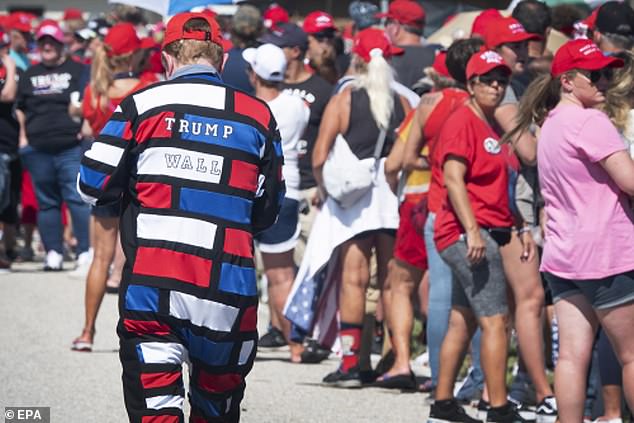 Trump will make his return to the campaign stage with a rally in Sanford, Florida, where he was scheduled to be last Friday night before tested positive for COVID.

Monday also is the start of a jam-packed with of campaign stops in states crucial to his re-election. On Tuesday Trump will be in Johnston, Pa., on Wednesday in Des Moines and Thursday in Greenville, North Carolina.

The president needs Florida’s 29 electoral votes if he wants a second term in the White House. Vice President Mike Pence was campaigning in the state on Saturday and Donald Trump Jr., the president’s eldest son, was in Florida over the weekend to rally supporters.

Florida’s death toll from the virus passed the 15,000 mark on Friday. The number of total daily infections topped 5,500 on Sunday.

And first-time filings for unemployment assistance in the state rose last week, with after Disney World and Universal Orlando announced layoffs.

Biden leads in the state by almost four points in the RealCleaPolitics average of Florida polls.

Questions linger about the state of the president’s health and how infectious he is. His doctor has given him the all-clear to return to the campaign trail and the president, at his rallies, is on stage and stays distant from supporters. 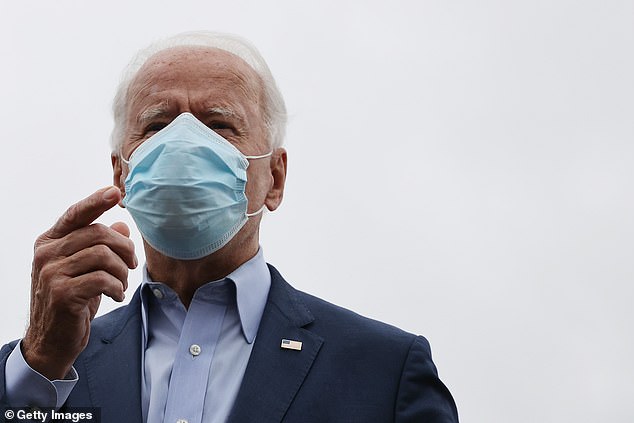 The Centers for Disease Control and Prevention recommends that people with COVID refrain from being around others for 10 days after symptoms first appear, and that includes 24 hours with no fever without the use of fever-reducing medications.

Those with a more severe to critical case of the virus could infectious for 20 days after symptoms begin.

The White House has not been clear about the severity of Trump’s bout with COVID. Officials have declined to say when he last tested negative. Dr. Sean Conley, Trump’s physician, has released written updates on Trump’s health but has not taken questions from the press since last Monday.

Trump’s positive test result was announced Oct. 2, the same day he was hospitalized, and he received treatments that are typically reserved for those who are severely ill.

That could be because he is president or because it was medically needed. If it was the later, that indicates he may need to isolate until Oct. 21.

The president’s doctor said he is no longer contagious.

‘He is no longer considered a transmission risk to others,’ Conley wrote in a memo on Sunday.

Conley also said ‘there is no longer evidence of actively replicating virus’ and ‘decreasing viral loads’ – although there was no mention if the president has tested negative.

‘It looks like I’m immune for, I don’t know, maybe a long time, or maybe a short time. It could be a lifetime. Nobody really knows. But I’m immune. So, the president is in very good shape to fight the battles,’ Trump told Fox Business’ Mario Bartiromo on Sunday.

‘I knew I was free. I beat this crazy, horrible China virus,’ he added.

Simple treatment that could free diabetics from insulin

Top Cryptocurrencies You Can Keep Track of This Week

Why do some people never feel cold ?!