President Donald Trump cursed out Vice President Mike Pence in a furious phone call demanding that Pence overthrow the presidential election results, it has been revealed.

On January 6, hours before his mob of loyalists stormed the U.S. Capitol as Pence presided over a joint session of Congress, Trump called the vice president’s residence with a final, desperate plea.

Pence, who had remained a quiet and loyal No. 2 throughout Trump’s term, was finally at the breaking point – and likely realized that his refusal to go along with Trump’s illegal plan would cost him politically with Trump’s base and scuttle any chance of a future presidential bid. 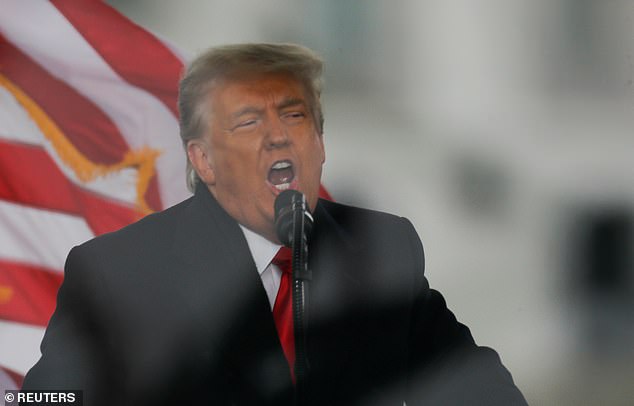 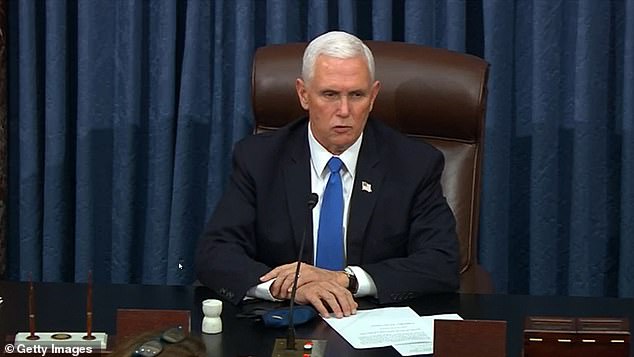 Pence, who had remained a quiet and loyal No. 2 throughout Trump’s term, was finally at the breaking point and rejected Trump’s plea, refusing to overturn the election

For days, Trump had been pressuring Pence to intervene in Congress and block the certification of the Electoral College vote naming Democrat Joe Biden as the next president.

After his flurry of election lawsuits were all thrown out, somehow Trump came to believe that Pence had the power to select the next president.

Pence’s counsel, Greg Jacob, researched the matter and concluded the vice president had no such authority. But Trump continued to press the matter, and Pence sought further outside counsel from John Yoo, a conservative legal scholar at the University of California at Berkeley who served in George W. Bush’s administration.

On January 5, Trump harried Pence in a string of encounters, including one meeting that lasted more than an hour, sources told the Times. Lawyers present in the meeting tried to convince Trump that Pence had no power to overthrow the election.

On the morning of January 6, Pence’s personal attorney called J. Michael Luttig, a conservative former appeals court judge, and asked him to write his opinion about Pence’s ability to intervene.

Luttig quickly shared his opinion that Pence had no such ability, and Pence cited it in a public letter shortly before the joint session of Congress convened, saying he would not intervene in the election. 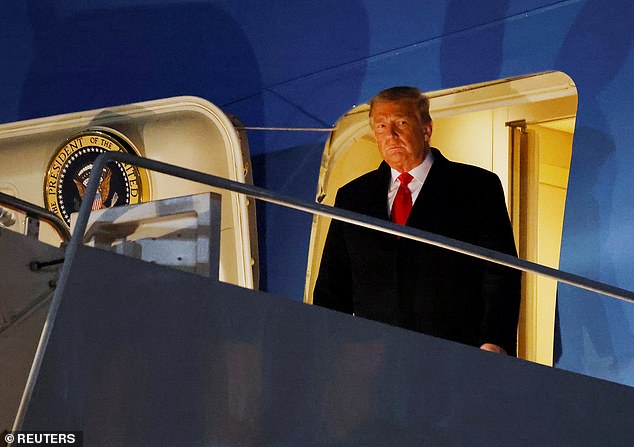 Trump, seen on Tuesday, harried Pence in a string of encounters before January 6 and begged him to illegally intervene in Congress to overthrow the election results, sources say 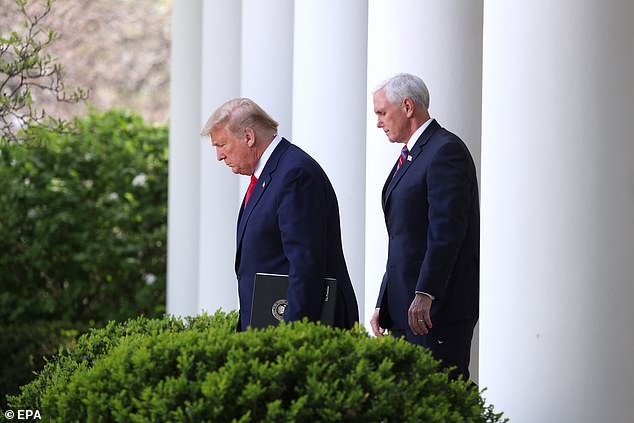 Throughout Trump’s term, Pence had specialized in remaining quietly in the background, avoiding anything that would draw the president’s rage. They are seen above last March

Pence’s decision infuriated the president and the crowd of Trump supporters gathered around the Capitol. As the mob stormed the building, some were heard chanting ‘hang Mike Pence!’

Secret Service agents whisked Pence out of the Senate chamber as the mob rampaged, taking him first to his offices and then to a basement-level bunker.

Trump himself had egged on his supporters at a rally with demands that they ‘fight,’ calling the election fraudulent, and putting pressure on Pence, whose only role was ceremonial and involved opening and reading from envelopes containing electoral votes.

Trump was glued to the television as the storming of the Capitol was broadcast.

As the attack unfolded and Pence huddled in the basement, Trump did not call Pence, instead tweeting out insults of the vice president at 2.24pm. 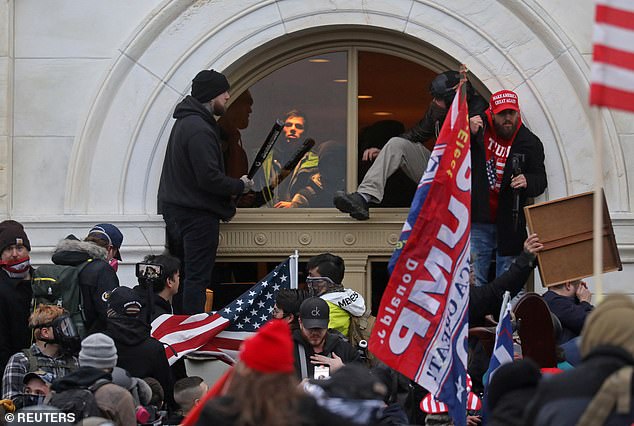 As Trump’s loyalists stormed the Capitol, Pence was whisked to a basement bunker. Trump, watching the events on TV, did not call Pence, but tweeted insulting him during the attack 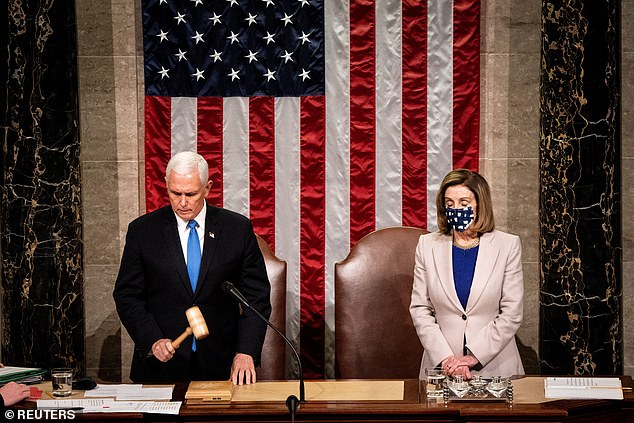 After the Capitol was secured, Congress reconvened and stayed after midnight to certify the election.

Pence and Trump did not speak the following day. But on Monday night, they reached an uneasy truce, as an increasingly isolated Trump met with Pence to beg him not to exercise the 25th Amendment to remove him from office in his final days.

Sources told the Times the hour-long Oval Office meeting was ‘nonsubstantive’ and ‘stilted.’

On Tuesday, Pence sent House Speaker Nancy Pelosi a letter saying he would not invoke the 25th Amendment to remove Trump from power as the House was taking its first votes on a resolution urging him to do so.

‘I do not believe that such a course of action is in the best interest of our Nation or consistent with the Constitution,’ Pence said of the Democrat-led removal effort. 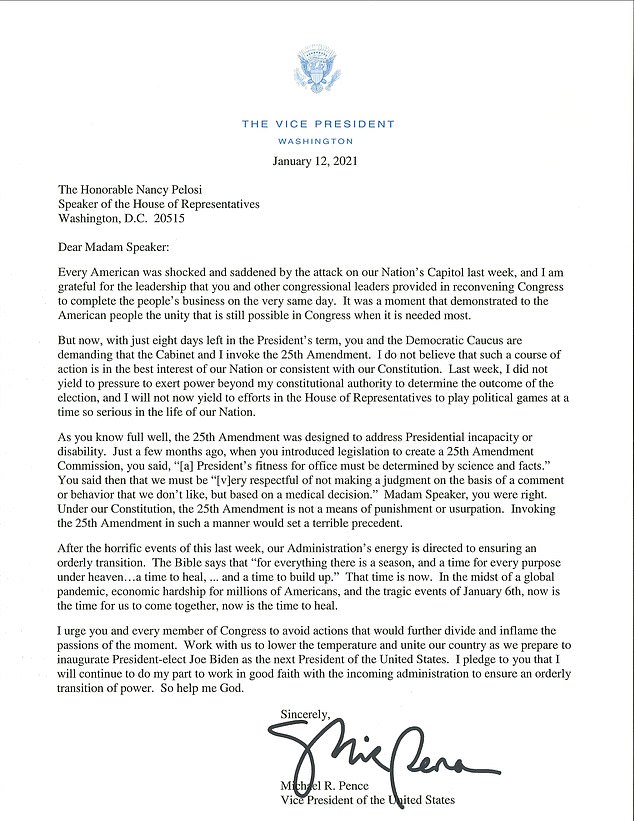 ‘Last week, I did not yield to pressure to exert beyond my constitutional authority to determine the outcome of the election, and I will not now yield to efforts in the House of Representatives to play political games at a time so serious in the life of our Nation.’

Experts say that Pence’s decision last week may have permanently cost him any future shot at winning the White House, by enraging Trump’s base.

‘Pence had a choice between his constitutional duty and his political future, and he did the right thing,’ Yoo told the Times.

‘I think he was the man of the hour in many ways — for both Democrats and Republicans. He did his duty even though he must have known, when he did it, that that probably meant he could never become president.’

In pictures: Troops guard US Capitol, one week after riots

The number of butterflies in Europe shrinks by 40%

Russia … a massive fire in an oil refinery

6 ways estate planning can save your family money

Microsoft’s revenue climbs by 17% in the fiscal second quarter.

Microsoft Corp. (NASDAQ: MSFT) reported its financial results for the fiscal second quarter on Tuesday that...

Dutch police out in force to prevent further anti-lockdown rioting