The pilot of Jeffrey Epstein’s pedophile private jet, the Lolita Express, has testified about former President Donald Trump being among passengers on some of his  flights.

Pilot Larry Visoki made the claim under oath on Tuesday while testifying at the sex trafficking trial of Epstein’s righ-hand woman, Ghislaine Maxwell.

He had been asked by prosecutors to describe his experience and he listed the famous passengers he’d flown, saying: ‘I certainly remember President Trump, but not many people associated with him.’

Trump and Epstein knew each other in the 1990s when they were both New York City playboys and successful entrepreneurs.

It was previously reported that Trump had flown on Epstein’s plane from Palm Beach, where both had homes, to Newark, in 1997.

Epstein is also said to have flown on one of Trump’s private planes.

Their relationship soured when Epstein hit on a towel attendant at Mar-a-Lago, Trump’s Palm Beach club, in the early 2000s, before Epstein was convicted of soliciting child prostitution. 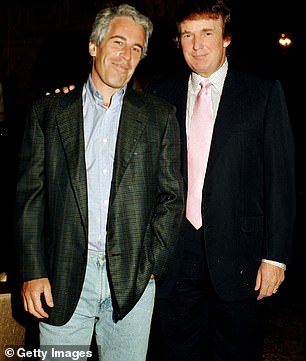 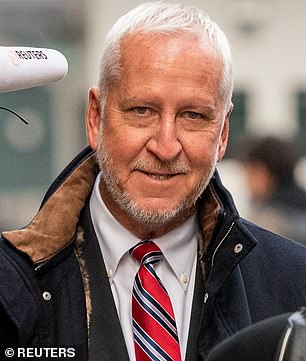 Donald Trump flew on Jeffrey Epstein ‘s private planes, the pilot of the Lolita Express has revealed on the witness stand

Visoki spent most of his testimony talking about the girls Epstein brought on the plane.

‘Mr. Epstein brought her to the cockpit. She had piercing power blue eyes,’ Visoski said of one alleged victim on Tuesday morning.

Maxwell’s attorney Christian Everdell asked, ‘And beyond the striking blue eyes, you have said she had large breasts, right?’

He said Maxwell ‘was the Number 2’ and that ‘Epstein was the big Number 1’ when asked about their relationship.

Asked what he had made of Epstein’s relationship to Ghislaine Maxwell, he said it was ‘more personal than business’, but added: ‘I wouldn’t characterize it as romantic.’

The pilot captained Epstein’s Boeing 727 jet – known infamously as the ‘Lolita Express’ – just one of several private aircraft which prosecutors believe was used to shuttle underage girls between Epstein’s residences in New York and Palm Beach.

Miss Pomerantz accused Maxwell of being one half of a powerful couple with Epstein, devising a sick ‘pyramid scheme of abuse’.

Learn the story of one of the 100,000 victims of fentanyl

Learn the story of one of the 100,000 victims of fentanyl