President Donald Trump spelled out elements of his multi-state legal strategy to try to pry back President-elect Joe Biden‘s victory as called by the networks, claiming through a recount he would strip Georgia away from the Democrat’s column.

A recount is going ahead with a hand county-by-county of the state, where Biden leads Trump by 14,000 votes.

On Wednesday, the state’s top election official, announced the beginning of the ‘audit,’ which came after two Republican Senate candidates called for his resignation, as Trump puts forward a flurry of charges of election fraud without providing evidence. 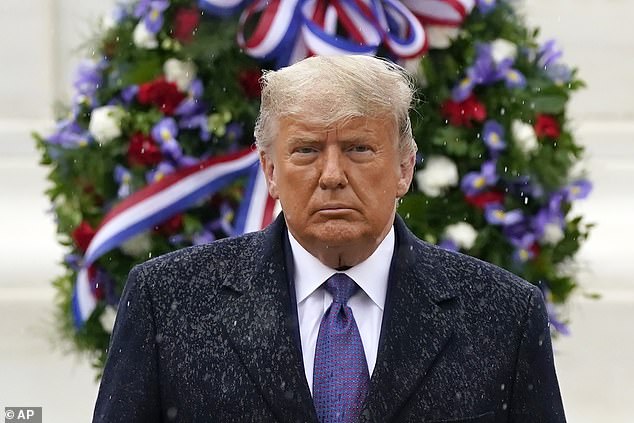 President Trump tweeted to complain that North Carolina hadn’t completed its count yet, in a state where he leads President-elect Joe Biden, while saying he ‘will win’ in Georgia after a recount

Trump tweeted about his strategy after the Associated Press called Alaska for him Wednesday, eight days after Election Day, although he has dismissed media calls in other states, including Arizona, Wisconsin, and Michigan.

‘It took long enough! What is taking North Carolina so long? Are they looking for more ballots to fix that one also?’ Trump asked.

Georgia is a close battleground where Trump leads, with Biden trailing by 73,000 votes there. 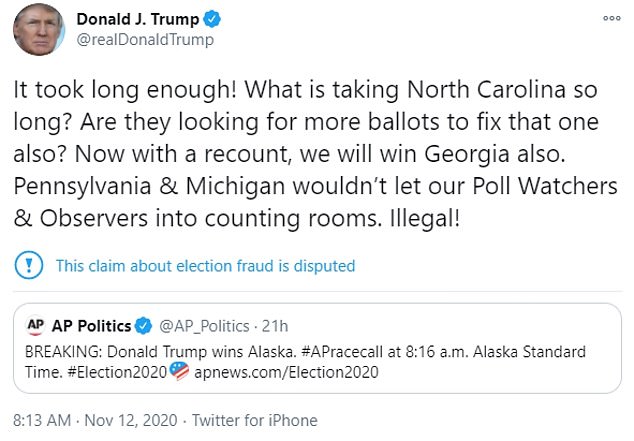 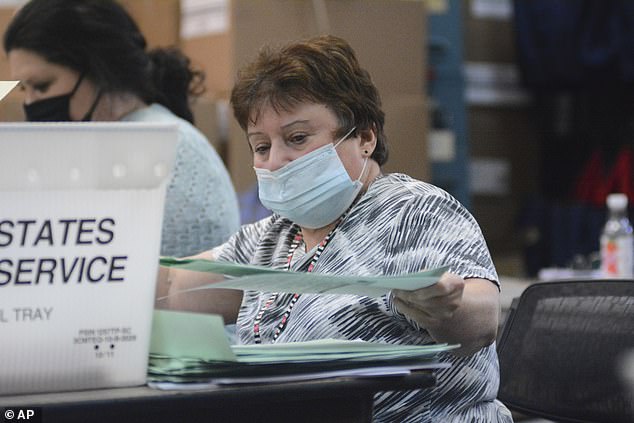 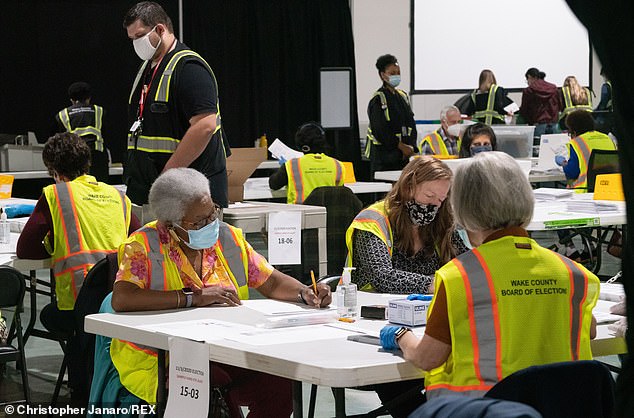 Biden already captured the Electoral College, leading Trump 279 to 217, even without Georgia. If Trump were to somehow pry it away through a recount, it would only bring his total to 233.

Hi comments about Pennsylvania and Michigan suggest that he will try to find a way to throw out the results in the states. That would grab another 36 electoral votes from Biden’s total – depriving him the White House.

By snatching back the ‘blue wall’ of Michigan, Pennsylvania, and Wisconsin, Biden carried the states by a total of more than 200,000 votes, far surpassing Trump’s 2016 vote margins in the state.

His comments about Michigan and Pennsylvania point to a plan floated even before the election where state legislatures would declare the count fraudulent amid a flood of mail-in ballots, then use their majority status to muscle through a set of electors for Trump despite the vote for Biden.

If that were to happen, it would set up a clash between the House, which Democrats control, and the Senate, where Republicans are one seat away from keeping their majority, over which electors to seat – with known results.

Trump fired off the tweet Thursday as he prepared to meet with Vice President Mike Pence, who has backed up his decision to pursue legal remedies after alleging fraud. Trump also meets with Secretary of State Mike Pompeo, who spoke Tuesday about a ‘smooth transition to a second Trump administration’ when questioned about blocking the transition process to teams readied by President-elect Biden.

There have been cracks in Trump’s legal strategy. In Michigan, a mailman who signed an affidavit claiming he overheard a conversation about possible election fraud pulled back his statement in an interview with postal IG officials. He said he ‘didn’t hear the whole story, my mind probably added the rest.’ Trump had called the carrier, Richard Hopkins, a ‘patriot’ for launching his claims.

‘That Mr. Biden’s margin of victory was much slimmer than projected can be credited partly to Mr. Trump’s emphasis in the closing days on their substantive differences—discussing fracking in Pennsylvania and toleration of socialism in Miami. But it wasn’t enough,’ he wrote.

Amid Trump’s constant claims of electoral fraud, which the president blasted across his Twitter account Thursday, Senate Minority Leader Charles Schumer of New York tried to shame Republicans into distancing themselves from him, accusing them of ‘cowardice.’

‘Instead of working to pull the country back together .. Republicans in Congress are spreading conspiracy theories, denying reality and poisoning the well of our democracy,’ Schumer said at a press conference.

‘The Republicans should stop their shenanigans about an election that President Trump has already lost and focus their attention,’ he continued.

Alex Smith's comeback story is an inspiration, even to the Detroit Lions

Platinum Jubilee: MPs and peers search for gift fit for the Queen