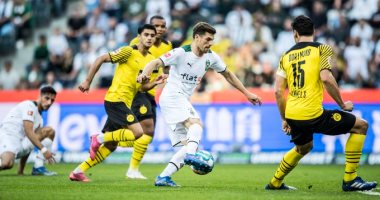 Borussia Dortmund received its second defeat during the current season in the German League against its host, Borussia Moenchengladbach, with a clean goal, in the meeting that brought the two teams together on Saturday evening at the “Borussia Park” stadium, in the sixth round of the Bundesliga for the current season 2021-2022.

The game’s only goal came in the 37th minute of the match by Dennis Zakaria, player of Borussia Moenchengladbach.

Dortmund completed 50 minutes of the match with ten players after his player Mahmoud Daoud was sent off in the 40th minute, after receiving a second yellow card.

The Norwegian star Erling Haaland, along with Marco Reus, was absent from Borussia Dortmund, in today’s meeting, as the Norwegian striker suffers from a muscle injury.

Haaland is the top scorer in the German league this season with 7 goals, equal to the Polish star Robert Lewandowski, the top scorer of Bayern Munich.

With this result, Dortmund’s balance stopped at 12 points in fourth place, while Borussia Moenchengladbach rose to eleventh place with 7 points, and Bayern Munich leads the German league standings with 16 points.

Leipzig had won a big victory a short time ago against its guest, Hertha Berlin, by a clean six, in the meeting that brought the two teams together today, Saturday, at the “Red Bull Arena”, in the sixth round of the German League for the current season 2021-2022.

The results of the remaining matches that were held at the same time were as follows: