A brazen seagull stole a doughnut straight from woman’s hand as she held it up to take an arty photo.

Nurse Emmie Holdrick, 29, inadvertently captured the moment the hungry bird swooped down on her phone.

She had been trying to get a photo of the sugary snack for social media in front of Paignton Beach in Devon, when it was snatched from her on November 19.

The short clip – which is taken from the ‘live’ photo feature on the iPhone – shows Emmie holding up the doughnut on the seafront when the bird attacks from out of nowhere.

In the blink of an eye, the thieving gull dives in with its beak open and snaps up the doughnut, spraying sugar in its wake.

It all happens so fast that Emmie doesn’t have time to react, we only hear her take a sharp intake of breath. 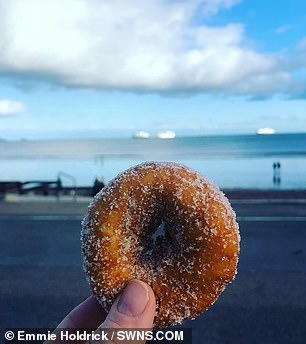 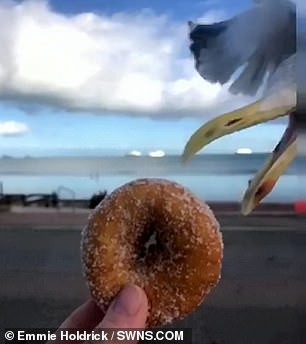 Emmie Holdrick, 29, was trying to get a photo of a doughnut for Instagram when a seagull stole it right out of her hands. She was holding the sugary snack up with the seafront of Paignton Beach in Devon in the background when the gull attacked

After the incident, Emmie said: ‘I was just trying to get a nice photo for Instagram when it happened.

‘I didn’t realise that iPhone photos move and when I got home I noticed I caught the whole thing on camera.

‘It made me feel hungry but I wasn’t shocked as it’s not the first time a seagull has stolen my food.

‘There are always lots of seagulls hovering around the beach especially where people are eating fish, chips and doughnuts – I should know better, being a local. 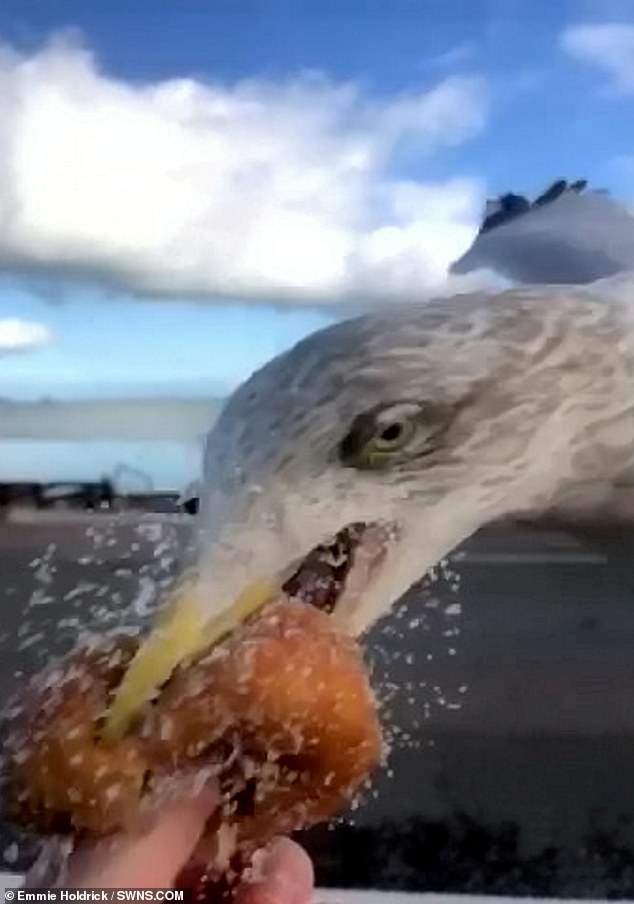 ‘Luckily we bought five doughnuts for £3 so I did manage to eat one or two. The seagulls here are so brazen.’

Last year in Paignton a seagull snatched a pet chihuahua from its owner’s back garden.

Becca Hill, 24, was left distraught after her partner, who was hanging out the washing, saw the bird swoop down and take their dog, Gizmo.

And seagull attacks have become a common occurrence in seaside towns around the country.

A woman was left ‘shaking’ after she was attacked by a colony of seagulls who wanted her chips on Brighton beach in August this year.

Monique Sveinsson, 46, from Cambridgeshire, was walking across the pebble beach with two trays of chips in her hands as the seagulls launched their attack to steal her food.