Tensions between Boris Johnson and Rishi Sunak are at risk of boiling over today with more vicious briefing – after No10 was forced to insist the PM is ‘well’ following his CBI meltdown.

Amid rising Tory unrest, Treasury sources have hit out at Mr Johnson for ‘blowing’ announcements including a huge £96billion rail upgrade.

The bruising swipe came after senior Conservatives vented fury at a series of bungles, demanding he brings in experienced big beasts to sharpen up his ‘f****** awful’ Downing Street team.

The premier’s shambolic speech at the CBI conference – during which he lost his thread and went on a rambling tangent about Peppa Pig World – fuelled growing frustration.

Some 19 MPs rebelled to vote against watering down the social care cap earlier this week, while dozens more abstained. The sleaze row is still festering and damaging the party in the polls, while the decision to downgrade plans for HS2 links and Northern Powerhouse rail strained relations with Tories in crucial Red Wall seats.

There are even claims that some MPs have started sending no-confidence letters to the chair of the powerful 1922 committee Sir Graham Brady – although there is no immediate prospect of reaching the threshold for triggering a contest.

A Treasury source told the Guardian the Integrated Rail Package had been a disaster partly because of the timing and ‘more care’ was needed before making promises.

‘In the end what happened was that we blew a £96bn announcement that really should have been a lot more positive,’ they said.

But a No10 source hit back: ‘I’m not really sure how moving a date on the calendar would have made a substantive difference.’

Mr Johnson faces an important test later when he runs the gauntlet of PMQs in the House of Commons. Last week the government benches looked unusually thin amid anger at the botched handling of the sleaze row.

Asked yesterday whether the premier – who has been suffering a heavy cold – is in good health, his spokesman said: ‘The prime minister is well and he is focused on delivering for the public.’

Deputy PM Dominic Raab batted away criticism of Mr Johnson’s performance at the CBI, saying the premier is ‘ebullient and tiggerish’ and on ‘great form’.

‘I know what the PM is like,’ he told BBC Radio 4’s Today programme. ‘He wanted to make that point about the optimism that defines this country.’

Mr Raab said Mr Johnson does not ‘stick to the script’ like other politicians in the past. ‘I just don’t think it is what the vast majority of voters listening to this show… are focused on,’ he said.

Amid rising Tory unrest, sources at Rishi Sunak’s (left) Treasury have hit out at Mr Johnson for ‘blowing’ announcements including a huge £96billion rail upgrade (right)

‘A day of my life I won’t get back’: Dominic Raab jokes he enjoyed Peppa Pig World less than PM 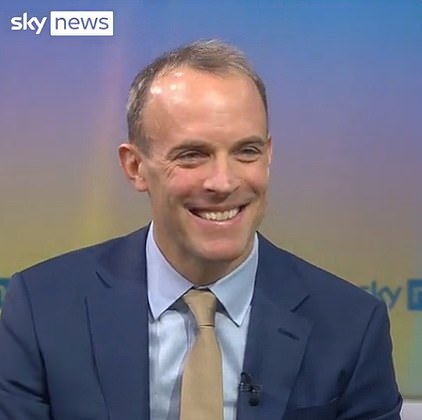 Dominic Raab today revealed that his experience of Peppa Pig World was rather less joyful than that of the the PM.

Boris Johnson gave a glowing review of the New Forest theme park – which he visited with wife Carrie and son Wilf on Sunday – in a bizarre speech to the CBI.

Asked on a round of interviews this morning whether he had been to the attraction with his own family, Mr Raab said: ‘I have. With my boys, they loved it. They are a bit older now.’

Pressed for his personal opinion he told Sky News: ‘It’s a day of my life I won’t get back.’

Told that the premier had seemed to enjoy it rather more, he caveated: ‘When they are that age it’s quite fun.’

Relations between No10 and No11 reached a low point over the summer, as the Chancellor made little secret of his irritation at Mr Johnson’s free-spending habits.

The Budget appeared to have secured an uneasy truce, with massive tax rises being pushed through to fund commitments such as the £12billion a year extra for the NHS and social care.

However, the latest storm suggests that the problems have not gone away.

Tory insiders have pointed the finger squarely at Rishi Sunak’s allies for some of the most brutal briefing, including one line attributed by the BBC to a ‘senior Downing Street source’. ‘There is a lot of concern inside the building about the PM … it’s just not working. Cabinet needs to wake up and demand serious changes,’ the source said.

One ally of Mr Johnson highlighted that the attribution of the quote had been changed from a ‘No10 source’ to a ‘Downing Street source’, adding: ‘I think you have to look a bit further down the street.’

A senior Conservative said tensions had resurfaced and No11 is ‘pushing hard’ to undermine Mr Johnson. ‘It is Rishi’s people, 100 per cent,’ they told MailOnline. ‘They’re too far apart intellectually.’

Liam Booth-Smith, a key aide to Mr Sunak has been mentioned among the suspects.

However, the Treasury has flatly denied any involvement in the vicious briefing saying the idea is ‘total made up rubbish’.

‘This is not from Liam or anyone else at the Treasury,’ said one source. ‘That suggestion is just an attempt to deflect the blame.’

Relations between Mr Sunak and No10 chief of staff Dan Rosenfield are said to have ‘not recovered’ from a bruising spending review last month in which the Chancellor was ordered to shell out a £35billion windfall from lower borrowing rather than build a warchest for tax cuts.

Mr Rosenfield has come in for particular criticism for failing to build a reliable machine that can see ‘elephant traps’, with a Tory aide dismissing him as ‘f****** awful’. There are calls for election guru Lynton Crosby to be drafted into knock heads together.

One former minister told MailOnline that No10’s top staff are not up to the task and the operation is largely ‘run by teenagers’ who cannot get the ‘disorganised’ premier into line. They said an experienced figure is needed to offer the same support as Willie Whitelaw famously gave Margaret Thatcher.

Some 19 MPs rebelled to vote against watering down the social care cap earlier this week, while dozens more abstained

Mr Johnson faces an important test later when he runs the gauntlet of PMQs in the House of Commons. Last week the government benches looked unusually thin amid anger at the botched handling of the sleaze row

Many in Government sense the hand of Dominic Cummings, the PM’s former chief adviser who has now transformed himself into Mr Johnson’s chief tormentor.

Richard Holden, an influential member of the 2019 intake of ‘Red Wall’ Tory MPs, told the grassroots website Conservative Home: ‘At a national level, it feels like the Government is missing chances to highlight the good work that such Conservative MPs are doing. And that it is making a few too many unforced errors.’

But Mr Raab insisted Mr Johnson is ‘on great form’, and shrugged off reports that MPs are sending no-confidence letters as ‘Westminster tittle tattle’.

He told BBC Breakfast: ‘The Prime Minister is on great form. The reality is people speak about speeches in the Westminster village, the gossip and all the rest of it.

‘It’s the job of Westminster commentators to pick up on one anonymous source from wherever they found it to criticise the Government of the day, that’s fine.’

Mr Raab went on: ‘The Prime Minister is an ebullient, bouncy, optimistic, Tiggerish character and he livens up his speeches in a way that few politicians past and present have done but actually there is a steeliness to him as a Prime Minister and indeed his team, and we work as a team.’

Although No10 insists the PM is ‘focused on the issues’ and he does not seem under imminent threat, the situation appears to be becoming more serious.

Downing Street insisted yesterday that Mr Johnson is ‘well and he is focused on delivering for the public’.

Mr Johnson was asked if ‘everything was OK’ following the bizarre speech in which the Prime Minister lost his place in his notes, made car noises and talked about a trip to Peppa Pig World.

‘The Prime Minister briefly lost his place in a speech,’ his official spokesman said. ‘He has given hundreds of speeches. I don’t think it’s unusual for people on rare occasions to lose their place in a speech.’

The spokesman added: ‘The Prime Minister is very much focused on delivering for the public.’

No10 said: ‘The Prime Minister, as you have seen from Cabinet, is focused on the issues that we face as we come up to the winter months and delivering on important changes like social care.’

Asked whether Mr Johnson would gather a core group of ministers around him to offer advice – as suggested by former Cabinet minister Lord Hague – the spokesman said: ‘The Prime Minister has an entire Cabinet to draw on who provide advice, as you would expect.’

The spokesman said he ‘wants people to be able to speak freely and give their views’ around the Cabinet table.

How did the ancient Egyptians celebrate the way of rams? Every god has his feasts

Heading into that meeting, President Joe Biden said he expected G-7 leaders to “announce that we will ban the import of Russian gold, a major export that rakes...

Red Bull SACK Formula Two driver Juri Vips after his alleged use of shocking racist language during a live gaming stream, following an investigation into the incidentJuri Vips...

Over the past few days, Western media attention has focused on the blockade imposed by Lithuania on the Russian enclave of Kaliningrad, with many predicting an escalation in...