Number 10 today insisted it would not be swayed by mounting calls from scientists to stop using lockdowns and let the coronavirus spread among young and healthy people.

The Prime Minister’s official spokesman said calls for the UK to aim for herd immunity against Covid-19 would not be heeded by policy-makers.

It comes after a petition named the Great Barrington Declaration was published this week calling for young people to be allowed to return to life as normal while the elderly and most vulnerable are given ‘focused protection’.

The open letter, written by experts at Oxford, Harvard and Stanford universities has since been signed by more than 8,000 scientists and medical workers, as well as 76,000 members of the public.

But Mr Johnson’s spokesman said today that there is no proof it would be possible to protect only vulnerable people, nor that herd immunity would ever develop.

Top scientists have also poured scorn on the plan, saying it is based on unproven science and thin on important details. One Oxford University professor today branded the declaration ‘a libertarian agenda packaged as science’ and ‘a manifesto for selfishness’. 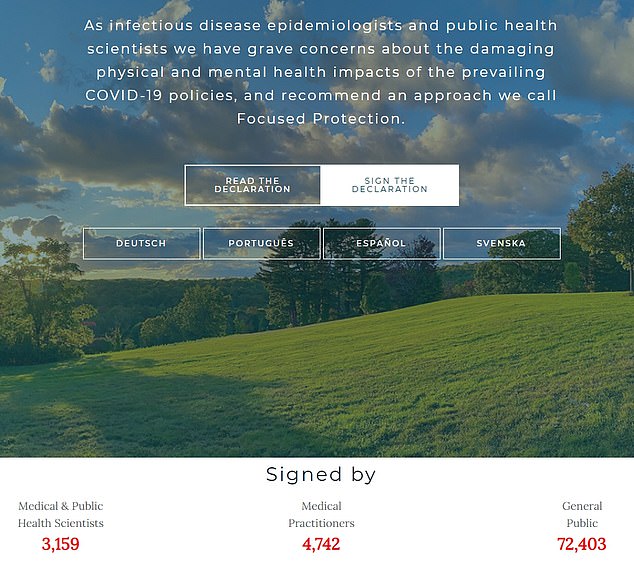 The Great Barrington Declaration has been signed by more than 8,000 scientists and medics and 72,000 members of the public since it was published on Monday

The concept of herd immunity emerged briefly as a possible plan for Government action before March’s lockdown but was quickly shot down by critics.

Allowing the virus to spread enough for most people to get immunity and prevent a second outbreak – if it is even possible – would have led to the deaths of hundreds of thousands of people, scientists warned at the time.

WHO CREATED THE GREAT BARRINGTON DECLARATION?

The co-signers, who added their names to the report before it was published, were:

Now, the Barrington Declaration calls for only people at most risk of dying to be protected while the rest of society returns to life as normal.

But in a briefing with journalists this afternoon the Prime Minister’s spokesman said: ‘We have considered the full range of scientific opinion throughout the course of this pandemic and we will continue to do so,’ the Independent reported.

‘But what I would also say is that it is not possible to rely on an unproven assumption that it is possible for people who are at lower risk, should they contract the virus, to avoid subsequently transmitting it to those who are at a higher risk and would face a higher risks of ending up in hospital, or worse in an intensive care unit.’

The declaration’s concept of ‘focused protection’ suggests looking after the vulnerable by using care home staff who are already immune, for example, by delivering groceries to elderly people so they don’t have to go shopping, or by families meeting outdoors instead of inside.

‘Those who are not vulnerable should immediately be allowed to resume life as normal,’ the petition said.

Better hygiene such as hand-washing and self-isolation for people who are ill should carry on for everyone, it said, but social distancing could be done away with.

As the virus spread through people at a low risk of dying, the population would gradually build immunity which would slow down the spread of Covid-19 in the future, they claimed – known as herd immunity.

But researchers have hit out at the plan, saying it is ‘not evidence-based’.

‘I think the Barrington Declaration seems to be a manifesto for selfishness and, I quote directly from it, those who are not vulnerable should immediately be allowed to resume life as normal.

‘I think this is a libertarian agenda packaged as science because it completely ignores the role of the so-called not vulnerable in passing the virus onto the rest of us.’

She added ‘nobody has ever done locking people away as an effective measure to achieve control of the virus – there isn’t a single country where it’s happened’.

The petition, which appears to be aimed at both the US and the UK, has been set up in a bid to try and prevent the drastic lockdown measures that were used in March from returning.

Many of the actions it calls for are already happening in much of the UK, although altered by social distancing.

‘Schools and universities should be open for in-person teaching,’ it said. ‘Extracurricular activities, such as sports, should be resumed.

‘Young low-risk adults should work normally, rather than from home. Restaurants and other businesses should open.

‘Arts, music, sport and other cultural activities should resume. People who are more at risk may participate if they wish, while society as a whole enjoys the protection conferred upon the vulnerable by those who have built up herd immunity.’

The herd immunity focus of the declaration has irked many researchers. Scientists still cannot prove whether people develop any immunity to Covid-19 after catching it the first time.

If it turns out that people regularly get the illness twice or more it may mean that turn the concept of herd immunity on its head.

There have been sporadic reports from around the world of reinfection, but the circumstances that allow it to happen are unclear.

For many of the people who are alleged to have caught it twice, scientists suspect their original illness never cleared up or their test results were wrong somewhere along the line.

Dr Rupert Beale, an infection biologist at the Francis Crick Institute in London, said: ‘This declaration prioritises just one aspect of a sensible strategy – protecting the vulnerable – and suggests we can safely build up “herd immunity” in the rest of the population. This is wishful thinking.

‘Furthermore, we know that immunity to coronaviruses wanes over time, and re-infection is possible – so lasting protection of vulnerable individuals by establishing “herd immunity” is very unlikely to be achieved in the absence of a vaccine.’

And University of Southampton public health expert, Dr Richard Head, added: ‘The Barrington Declaration is based upon a false premise – that governments and the scientific community wish for extensive lockdowns to continue until a vaccine is available.

‘Lockdowns are only ever used when transmission is high, and now that we have some knowledge about how best to handle new outbreaks, most national and subnational interventions are much “lighter” than the full suppressions we have seen for example in the UK across the spring of 2020.

‘Those behind the Barrington Declaration are advocates of herd immunity within a population. They state that “those who are not vulnerable should immediately be allowed to resume life as normal”, with the idea being that somehow the vulnerable of society will be protected from ensuing transmission of a dangerous virus.

‘It is a very bad idea. We saw that even with intensive lockdowns in place, there was a huge excess death toll, with the elderly bearing the brunt of that, and 20-30 per cent of the UK population would be classed as vulnerable to a severe Covid-19 infection.’

The Great Barrington Declaration in full

‘As infectious disease epidemiologists and public health scientists we have grave concerns about the damaging physical and mental health impacts of the prevailing Covid-19 policies, and recommend an approach we call Focused Protection.

‘Coming from both the left and right, and around the world, we have devoted our careers to protecting people. Current lockdown policies are producing devastating effects on short and long-term public health.

‘The results (to name a few) include lower childhood vaccination rates, worsening cardiovascular disease outcomes, fewer cancer screenings and deteriorating mental health – leading to greater excess mortality in years to come, with the working class and younger members of society carrying the heaviest burden. Keeping students out of school is a grave injustice.

‘Keeping these measures in place until a vaccine is available will cause irreparable damage, with the underprivileged disproportionately harmed.

‘Fortunately, our understanding of the virus is growing. We know that vulnerability to death from Covid-19 is more than a thousand-fold higher in the old and infirm than the young. Indeed, for children, Covid-19 is less dangerous than many other harms, including influenza.

‘As immunity builds in the population, the risk of infection to all – including the vulnerable – falls. We know that all populations will eventually reach herd immunity – i.e. the point at which the rate of new infections is stable – and that this can be assisted by (but is not dependent upon) a vaccine. Our goal should therefore be to minimize mortality and social harm until we reach herd immunity.

‘The most compassionate approach that balances the risks and benefits of reaching herd immunity, is to allow those who are at minimal risk of death to live their lives normally to build up immunity to the virus through natural infection, while better protecting those who are at highest risk. We call this Focused Protection.

‘Adopting measures to protect the vulnerable should be the central aim of public health responses to Covid-19. By way of example, nursing homes should use staff with acquired immunity and perform frequent PCR testing of other staff and all visitors. Staff rotation should be minimized. Retired people living at home should have groceries and other essentials delivered to their home. When possible, they should meet family members outside rather than inside. A comprehensive and detailed list of measures, including approaches to multi-generational households, can be implemented, and is well within the scope and capability of public health professionals.

‘Those who are not vulnerable should immediately be allowed to resume life as normal. Simple hygiene measures, such as hand washing and staying home when sick should be practiced by everyone to reduce the herd immunity threshold. Schools and universities should be open for in-person teaching. Extracurricular activities, such as sports, should be resumed. Young low-risk adults should work normally, rather than from home.

‘Restaurants and other businesses should open. Arts, music, sport and other cultural activities should resume. People who are more at risk may participate if they wish, while society as a whole enjoys the protection conferred upon the vulnerable by those who have built up herd immunity.’

View the full petition on The Great Barrington Declaration website.

Zeljko Buvac has still not buried the hatchet with Jurgen Klopp