The newspaper said the report – which provides fresh details on the number of researchers affected, the timing of their illnesses, and their hospital visits – may add weight to calls for a broader probe of whether the COVID-19 virus could have escaped from the laboratory.

The report came on the eve of a meeting of the World Health Organization’s decision-making body, which is expected to discuss the next phase of an investigation into the origins of COVID-19. 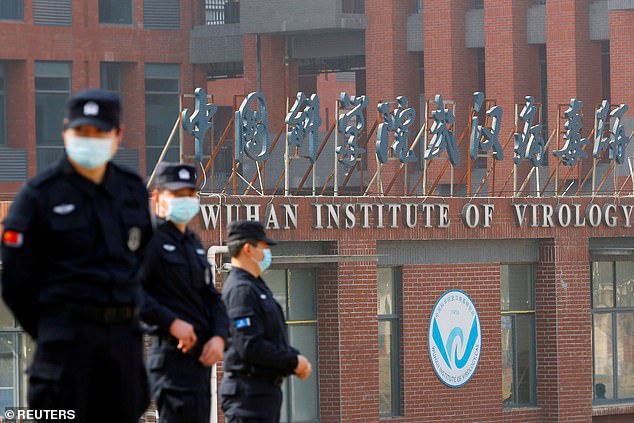 A National Security Council spokeswoman had no comment on the Journal’s report but said the Biden administration continued to have ‘serious questions about the earliest days of the COVID-19 pandemic, including its origins within the Peoples Republic of China.’

She said the U.S. government was working with the WHO and other member states to support an expert-driven evaluation of the pandemic’s origins ‘that is free from interference or politicization.’

‘We’re not going to make pronouncements that prejudge an ongoing WHO study into the source of SARS-CoV-2, but we’ve been clear that sound and technically credible theories should be thoroughly evaluated by international experts,’ she said.

The Journal said current and former officials familiar with the intelligence about the lab researchers expressed a range of views about the strength of the report’s supporting evidence, with one unnamed person saying it needed ‘further investigation and additional corroboration.’ 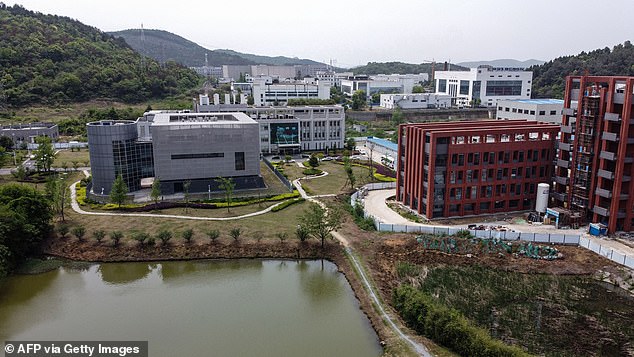 China’s foreign ministry noted that a WHO-led team had concluded a lab leak was extremely unlikely after a visit in February to the virology institute. Pictured, an aerial view shows the P4 laboratory at the Wuhan Institute of Virology in Wuhan in China’s central Hubei province

The United States, Norway, Canada, Britain and other countries in March expressed concerns about the WHO-led COVID-19 origins study, and called for further investigation and full access to all pertinent human, animal and other data about the early stages of the outbreak.

Washington is keen to ensure greater cooperation and transparency by China, according to a source familiar with the effort.

The Chinese Embassy in Washington did not immediately respond to a request for comment on Sunday.

On Sunday, China’s foreign ministry noted that a WHO-led team had concluded a lab leak was extremely unlikely after a visit in February to the virology institute. ‘The U.S. continues to hype the lab leak theory,’ the ministry said in response to a request for comment by the Journal. ‘Is it actually concerned about tracing the source or trying to divert attention?’

The Trump administration had said it suspected the virus may have escaped from a Chinese lab, which Beijing denies.

A State Department fact sheet released near the end of the Trump administration had said ‘the U.S. government has reason to believe that several researchers inside the WIV became sick in autumn 2019, before the first identified case of the outbreak, with symptoms consistent with both COVID-19 and common seasonal illnesses.’ It did not say how many researchers.

China refused to give raw data on early COVID-19 cases to the WHO-led team probing the origins of the pandemic, according to one of the team´s investigators, Reuters reported in February, potentially complicating efforts to understand how the outbreak began. 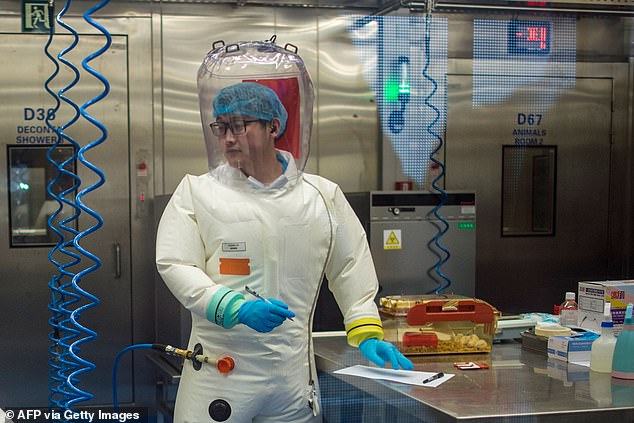 Earlier on Sunday, Dr Anthony Fauci revealed he is ‘not convinced’ that COVID-19 developed naturally and called for an open investigation into its origins as China faces mounting pressure to provide transparency on the issue.

Fauci, the nation’s leading expert in infectious diseases, explained his uncertainty during a PolitiFact event on May 11 entitled: United Facts of America: A Festival of Fact-Checking.

‘There’s a lot of cloudiness around the origins of COVID-19 still, so I wanted to ask, are you still confident that it developed naturally?’ PolitiFact managing editor Katie Sanders asked Fauci.

‘No actually,’ he replied. ‘I am not convinced about that, I think we should continue to investigate what went on in China until we continue to find out to the best of our ability what happened.’

Fauci continued: ‘Certainly, the people who investigated it say it likely was the emergence from an animal reservoir that then infected individuals, but it could have been something else, and we need to find that out.

‘So, you know, that’s the reason why I said I’m perfectly in favor of any investigation that looks into the origin of the virus.’

Fauci’s appearance at the event came hours after he was grilled on the same topic during a tense Senate hearing.

‘Will you in front of this group categorically say that the COVID-19 virus could not have occurred by serial passage in a laboratory?’ Sen Rand Paul (R – Kentucky) had asked Fauci.

The NIH director replied: ‘I do not have any accounting of what the Chinese may have done, and I’m fully in favor of any further investigation of what went on in China.’

Fauci also unequivocally refuted Paul’s suggestion that the NIH had funneled money to the Wuhan Institute of Virology – the Chinese lab accused of playing a role in the COVID-19 outbreak. 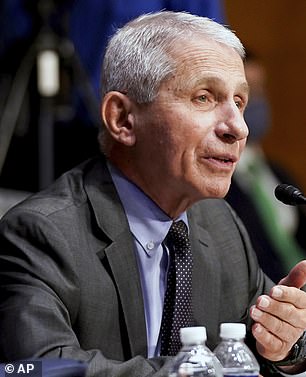 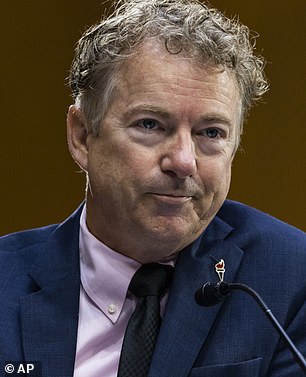 Republicans have claimed to have ‘significant circumstantial evidence’ linking COVID-19 to the Wuhan Institute of Virology (pictured). Senator Rand Paul clashed with Fauci over the origins of COVID-19 at a hearing a Senate hearing on May 11

During his segment at the PolitiFact event Fauci slammed Paul for ‘conflating… in a way that’s almost irresponsible’ Chinese scientists with collaborative research into Sars-Cov-1, which emerged in China in the early 2000s.

Fauci’s appearance at the event received little media attention at the time but was pulled back into the spotlight over the weekend after the White House renewed its call for an independent and ‘transparent’ investigation into the origins of the COVID.

White House Press Secretary Jen Psaki on Thursday called for exploring the ‘root causes’ of the pandemic after Republicans issued an interim report saying there was ‘significant circumstantial evidence’ that the virus emerged from the Wuhan Institute of Virology.

‘I would caution you against disproving a negative there which is never the responsible approach in our view when it comes to getting to the bottom of the root causes of a pandemic that has killed hundreds of thousands of people in the United States,’ she said in response to a question about the report. 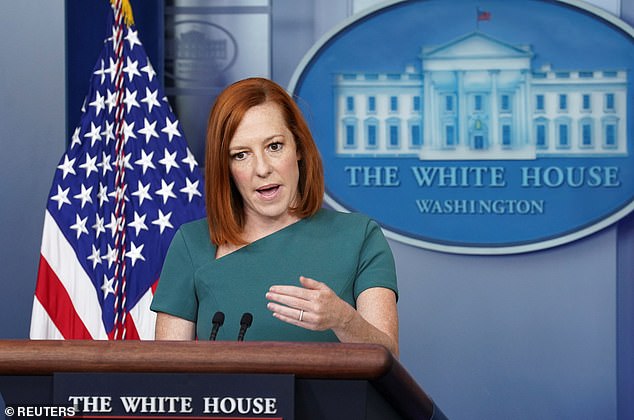 ‘Our view continues to be that there needs to be an independent, transparent investigation,’ she said.

She said the investigation required the ‘cooperation and data provided from the Chinese government’ – which has denied administration requests to fully share it.

‘We don’t have enough info at this point to make an assessment,’ she continued.

USA Today found it ‘false’ that any US funding led to the COVID outbreak.

In 2014, NIH approved a grant to EcoHealth Alliance designated for research into ‘Understanding the Risk of Bat Coronavirus Emergence.’ The project involved collaborating with researchers at the Wuhan Institute of Virology to study coronaviruses in bats and the risk of potential transfer to humans.

In total, $3,378,896 in NIH funding was directed from the government to the project.

The funding was a fee for the collection and analysis of viral samples, the group said. It was directed toward SARS research.

The grant was terminated in April 2020.

Asked when Biden would call Chinese President Xi Jinping, Psaki responded that ‘We have made that call publicly many times’ and ‘conveyed that privately. And we have certainly communicated that they were not transparent from the beginning.’

The Republicans on the panel made their claim after infectious Fauci clashed with Sen Paul over his claims about a Chinese lab leak – and statements about a conspiracy theory that US backing was involved.

Many top scientists, while not ruling out the possibility of a human-caused event, point to the likelihood of the virus mutating and jumping form animals to humans, as has happened with numerous previous coronaviruses.

The report says U.S. agencies and academic institutions ‘may have funded or collaborated in’ gain of function research – after Fauci specifically denied government backing.

‘Based on publicly available information, the possibility that the outbreak originated from an accidental exposure at the WIV has not been disproven,’ it says.

It cites competing theories – including the virus originating from a Chinese wet market, jumping over from human contact with a bat or other species, or even through handling of imported frozen food  – but then says it focuses on just one.

‘While Committee Republicans acknowledge there are differing theories on the origins of COVID-19, this review focuses on the WIV as a possible origin source,’ it says, referencing the Wuhan lab.

The report was released publicly Wednesday after first being obtained by Fox News.

The report, though cites ‘significant circumstantial evidence raises serious concerns that the COVID-19 outbreak may have been a leak from the Wuhan Institute of Virology,’ without providing any direct evidence that it did.

It says China has a ‘history of research lab leaks resulting in infections’ and says the lab conducts ‘dangerous research,’ which risks the ‘accidental outbreak of a pandemic.’

The report follows repeated attacks by President Donald Trump on China after the virus outbreak. He frequently called covid-19 the ‘China virus’ in the run-up to the election and called it the ‘kung flu.’

It cites public reporting that Chinese researchers were sickened in the fall of 2019 with ‘COVID-10-like symptoms.’

‘By contrast, little circumstantial evidence has emerged to support the PRC’s claim that COVID-19 was a natural occurrence, having jumped from some other species to human’ according to the report, although it is not just the Chinese Communist Party making the claim. 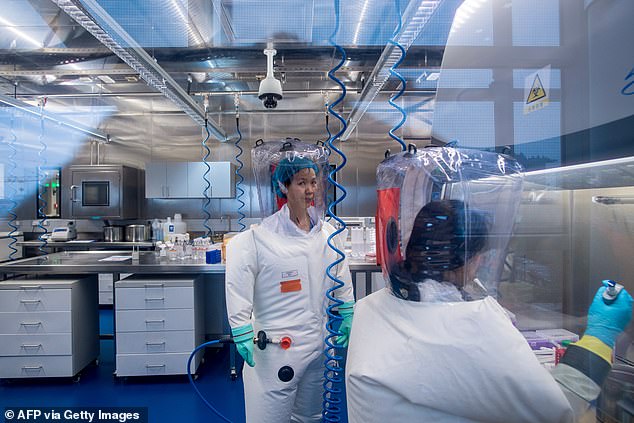 Chinese virologist Shi Zhengli (L) is seen inside the P4 laboratory in Wuhan, capital of China’s Hubei province on February 23, 2017. Two Chinese labs are located close by a wet market in Wuhan that scientists believe allowed covid-19 to proliferate

Earlier this month, Paul and Fauci got in a tense exchange during a Senate hearing, where Paul accused the US of potentially funding ‘gain-of-function’ research bats that could have gone awry.

‘Senator Paul, with all due respect, you are entirely and completely incorrect that the NIH has not never and does not now fund gain-of-function research in the Wuhan Institute of Virology,’ shot back Fauci.

‘Could you rule out a laboratory escape? The answer in this case is probably not. Will you in front of this group categorically say that the COVID-19 could not have occurred through serial passage in a laboratory,’ Paul asked Fauci.

‘I do not have any accounting of what the Chinese may have done and I’m fully in favor of any further investigation of what went on in China,’ Fauci, the head of the National Institute of Allergy and Infectious Diseases, responded.

‘However I will repeat again, the NIH and NIAD categorically has not funded gain of function research to be conducted in the Wuhan Institute.’

Fauci also told him: ‘I fully agree that you should investigate where the virus came from. But again, we have not funded gain of function research on this virus in the Wuhan Institute of Virology. No matter how many times you say it, it didn’t happen.’

A report by the World Health Organization with the collaboration from China called a ‘zoonotic transmission’ from animals to humans ‘likely to very likely’ as the cause, although the administration has faulted the report as incomplete.

Bank Holiday heatwave! 'Monsoon May' is set to be replaced by 73F heat within days

‘Why do we have the worst death rate in the world?’ Piers Morgan skewers minister Brandon Lewis

Fortnite Is Teasing a God of War Kratos Skin

Why Greenpeace is dropping huge boulders into the sea

SUNDAY, JULY 11To Wembley Stadium for the Euros ultimate between England and Italy. 'Is that this...