Driver spotted carrying motorbike on the back seat of his car

Call that a sidecar? Driver speeds along the M62 with MOTORBIKE wedged across his back seats after taking off the doors to cram it inside

This is the moment a driver drove down the outside lane of a motorway with his car’s rear doors removed and a motorbike wedged across the seats.

The Peugeot 206 was spotted on the M62 in West Yorkshire driving along the fast lane.

Fellow motorist Russ Mullan said he was astonished when he saw the motorbike resting in the back of the car. 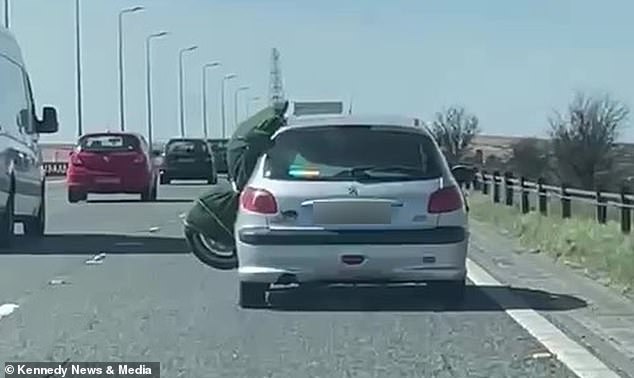 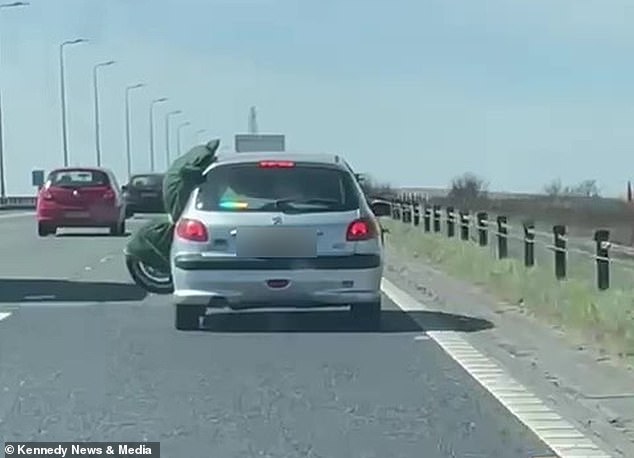 Despite the unusual load, the motorist was filmed driving along the fast lane in the M62 in West Yorkshire 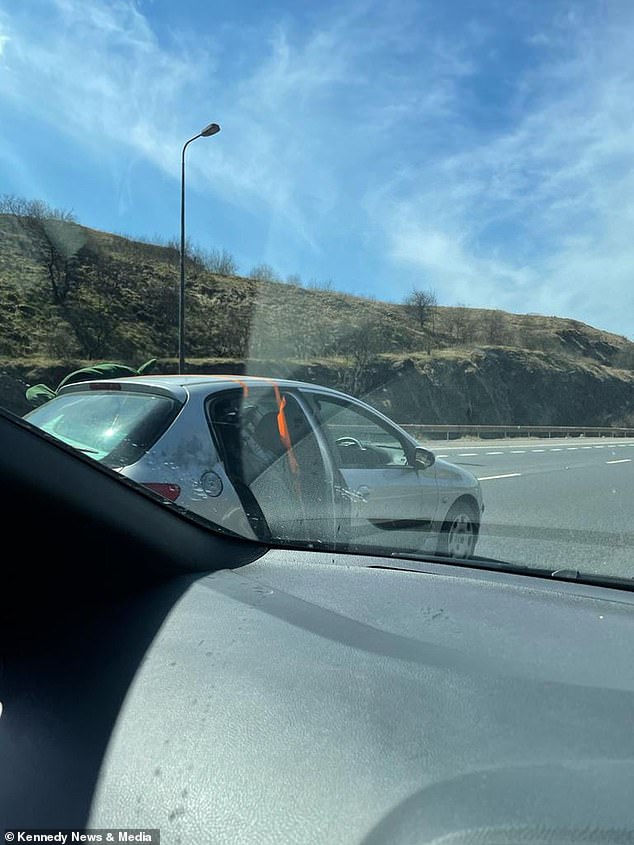 The motorbike’s front wheel, headlight and handlebars were sticking out the passenger’s side of the car.

The load posed a danger to fellow motorists and especially cyclists when the vehicle left the motorway.  Mr Mullan said: ‘It was just crazy, I don’t think I’ll see anything like that again, I doubt many people will. I was just astounded by what I was looking at.

‘I saw this car in front in the middle lane and thought “what the hell”. The first thing I noticed was there were no back doors.

‘He was bobbing and weaving through the traffic with a full-size motorbike through his back doors which had gone completely.

‘All of a sudden it pulled in front of me and when I looked closer, I saw the motorbike wheel hanging out the side of it.

‘It kept moving between lanes but when we pulled up to the side of it I could see it was bloke in his late 20s with a flat cap on and a Sherlock Holmes pipe. I just couldn’t help but start laughing.

‘Then I thought if he was on a normal road and a pushbike was coming along it could wipe them out.

‘I was trying to work out if it was legal or not. There was only half a door there. I just thought he was a crazy guy.

‘As I got to Rochdale, the traffic had slowed down and he pulled off the motorway. I assumed the traffic was slowing down for this guy.

‘I thought to myself it must have taken ages to get the bike in. I’d be surprised if he ever uses that car again, he’d have to get those back doors on.’

West Yorkshire Police have been approached for a comment.

Europe should stop waiting for the U.S. on climate. It should lead | View