A driver who completed the 837-mile journey from one end of Britain to the other waited six months before claiming he made the trip in record time to avoid a speeding prosecution, a court heard.

Thomas Davies, 29, drove from Land’s End in Cornwall to John O’Groats in Scotland in September 2017, in what he said was the fastest ever land time of nine-and-a-half hours.

He is said to have flown through 50 cameras and past 15 police constabularies, and hit only one red light – all without getting a single ticket despite an average speed of almost 90mph.

But Davies, of Corwen in North Wales, is now on trial charged with two counts of dangerous driving in a specially adapted Audi S5 with a 4.2 litre VA engine and for having an additional fuel tank in his boot.

He is also accused of perverting the course of justice for using false registration plates, displaying false number plates to avoid speed traps, and kitting out his Audi with speed-trap detectors discovered in a police raid.

Prosecutor Ryan Murray told Truro Crown Court: ‘This is a case about two tips of the UK – John O’Groats in the north of Scotland and Land’s End here in Cornwall and the defendant’s ambition to travel from one of those points to the other, in a motor vehicle quicker than anyone else had ever done before. It is also about, the prosecution say, illegal methods that he used to achieve his ambition.’ 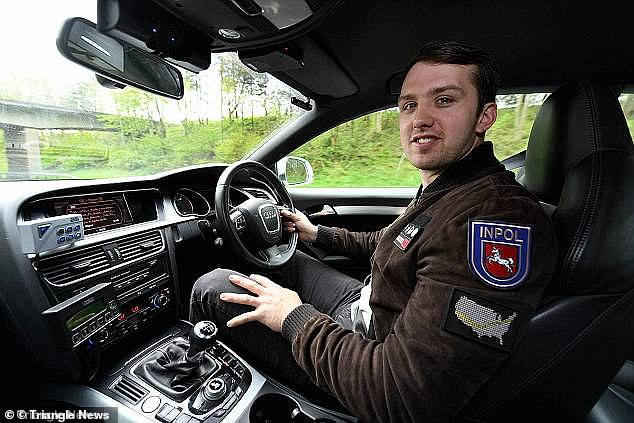 Thomas Davies, 29, drove from Land’s End in Cornwall to John O’Groats in Scotland in September 2017, in what he claimed was the fastest ever land time of nine-and-a-half hours 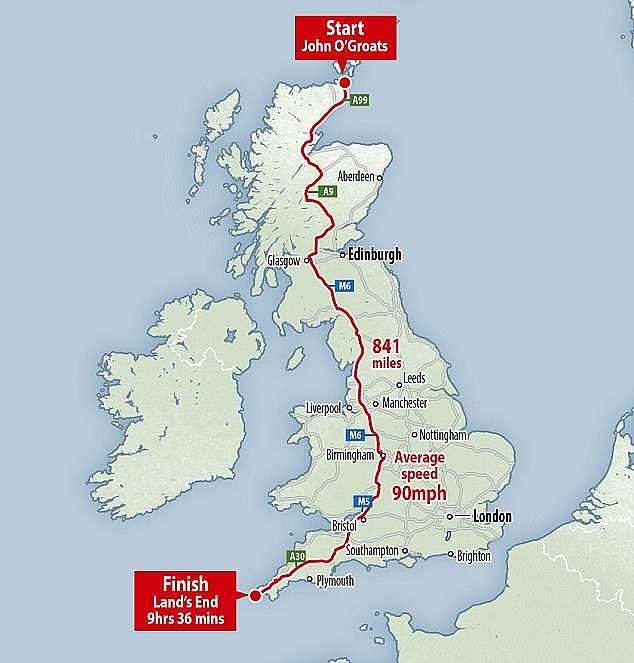 He said that holding a record is ‘worth very little if you can’t tell the world about it’, adding: ‘Why did he wait until April 2018? It appears that that was a deliberate decision.’

Mr Murray said it would normally take around 15 hours to travel from Land’s End to John O’Groats, but Davies managed to do it in nine hours and 36 minutes.

He claimed that Davies’ average speed would have been 89mph, which he called ‘an extremely dangerous way to drive’.

The prosecutor told the court: ‘To travel 841 miles in that time requires the driving to be fast, very fast in fact. You may think this is obvious. Speed records are after all not easily broken by vehicles that travel slowly.

‘How fast the vehicle it was in travelled is a matter of simple physics. Speed equals distance over time. You take the distance travelled, you divide it by the time taken, and you get the speed. When you do the maths in this case, you arrive at this – an average speed of 87.6mph.

‘If you factor in a stop to refuel, you arrive at an average speed exceeding 89mph. The prosecution say that that is, on any reasoning, an extremely dangerous way to drive.’

Police raided Davies’ home in August 2018 and found a silver Audi A5 S5 car he said he broke the record in, and an extra 80 litre fuel tank in the boot which was free to rattle around in the boot and was not sealed. 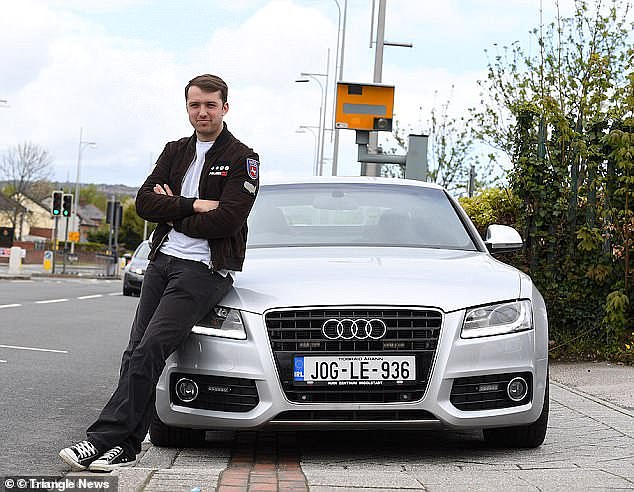 Davies, of Corwen in North Wales, is now on trial charged with two counts of dangerous driving in a specially adapted Audi S5 with a 4.2 litre VA engine. He is also accused of perverting the course of justice for displaying false number plates

Officers also found four transponders known as jammers – two under the front registration plate and two under the rear plate – which are used to sense a speed laser. Mr Murray alleged that Davies used these devices to ‘avoid detection’.

He also alleged that Davies used fake number plates to get away with speeding.

The fake plates are said to be linked to someone who also owns an Audi A5 but that the vehicle has never left Ireland, and he has no knowledge of the defendant. Mr Murray claimed the plates had been cloned.

He told the court: ‘The benefit of using fake plates is obvious to someone seeking to commit criminal offences on the road – it avoids detection.

‘Normally, the registration plate is linked to a car and then the registered keeper person. If it is observed by a camera doing something it shouldn’t be, the letters are sent to the person who is registered as owning the vehicle.

‘With fake plates, that can’t happen. The police would be chasing information which simply doesn’t exist.’

Davies denies the charges and his trial continues.

Why are the Steelers and Ravens playing Wednesday afternoon? And why is RG3 starting? What we know

December update: should you buy or sell Microsoft?

Nedved: Ronaldo and Pirlo will not leave Juventus