Police in Canada said the 20-year-old man who mowed down a family of five, killing four of them, on Sunday was motivated by hate directed at the victims’ Muslim fate, as the mayor of the Ontario city where the deadly attack took place called it an ‘act of mass murder.’

Authorities in London, Ontario, citing witnesses, said that Nathaniel Veltman jumped the curb in his Dodge Ram on Sunday, struck the five family members, ranging in age from 9 to 74, and then drove off at high speed.

Veltman, a resident of London who was arrested who was arrested after the incident in the parking lot of a mall, has been charged with four counts of first-degree murder and one count of attempted murder. He is due back in court on Thursday after being remanded to custody on Monday.

Canada’s Prime Minister Justin Trudeau denounced the deadly incident as ‘a terrorist attack, motivated by hatred, in the heart of one of our communities.’

Trudeau addressed the attack on Tuesday in the House of Commons after observing a moment of silence in honor of the victims.

‘We’ll continue to fight hate online and off-line… (including) taking more action to dismantle far right hate groups, like we did with the Proud Boys by adding them to Canada’s terror listing. And we’ll continue doing everything we can to keep communities safe.’ he said.

The prime minister of Pakistan, where the victims were originally from, likewise called the attack a deliberate act of terrorism targeting Muslims.

‘There is evidence that this was a planned, premeditated act, motivated by hate,’ Detective Superintendent Paul Waight of the London police department told reporters. ‘We believe the victims were targeted because of their Islamic faith.’

Authorities have not officially named the victims, but the description of a GoFundMe campaign , which has raised nearly $300,000 in less than two days, identified them as Salman Afzaal, 46, a physiotherapist and cricket lover; his wife, Madiha Salman, 44, who was in the process of working towards finishing her exams to obtain her PhD at Western University in Civil engineering; their 15-year-old daughter, Yumna Salman, a freshman at Oakridge Secondary School, and her grandmother, 74. 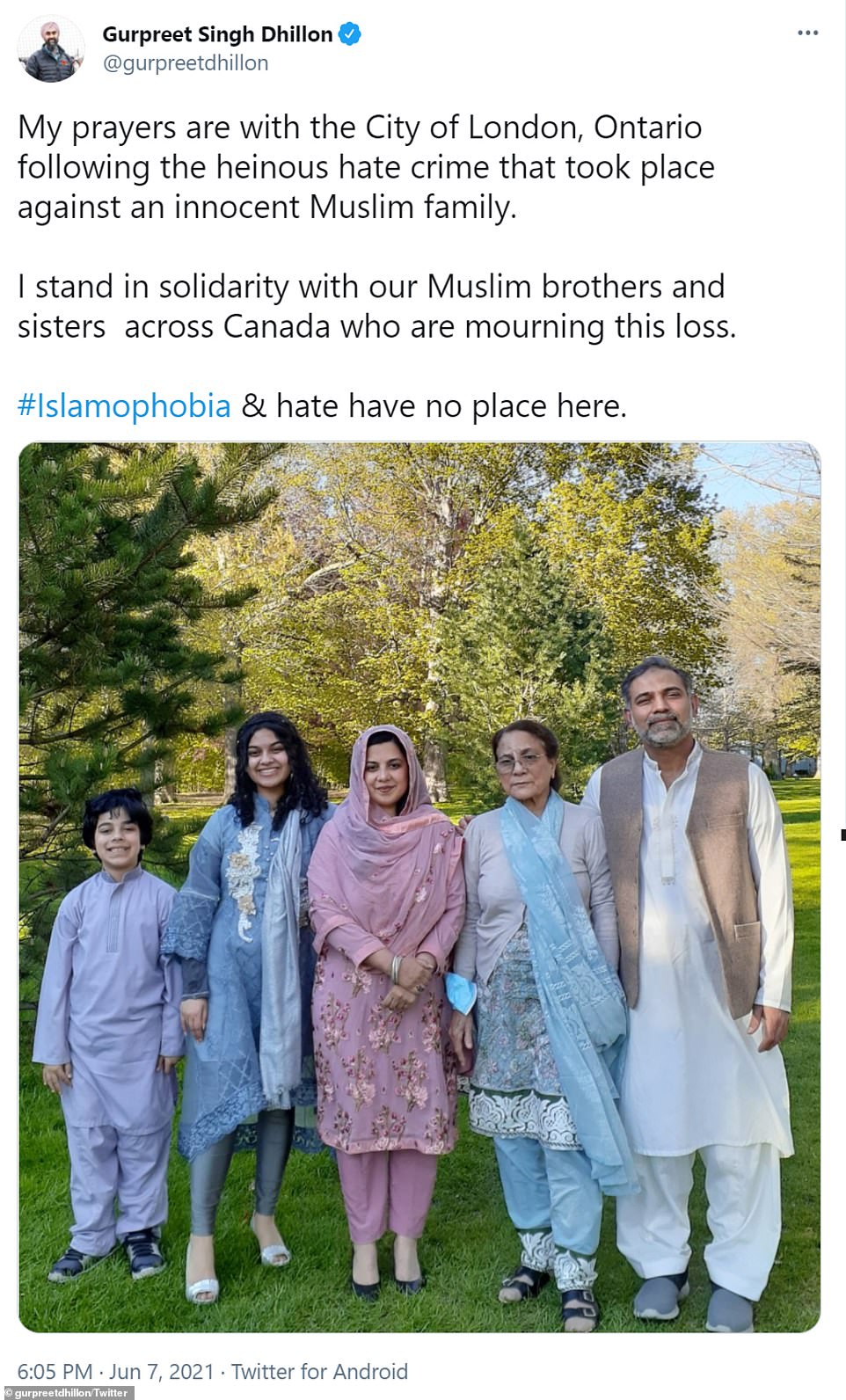 This image shows the five members of a Muslim Canadian family, ages 9 to 74, who were mowed down in London, Ontario, on Sunday, killing four of them 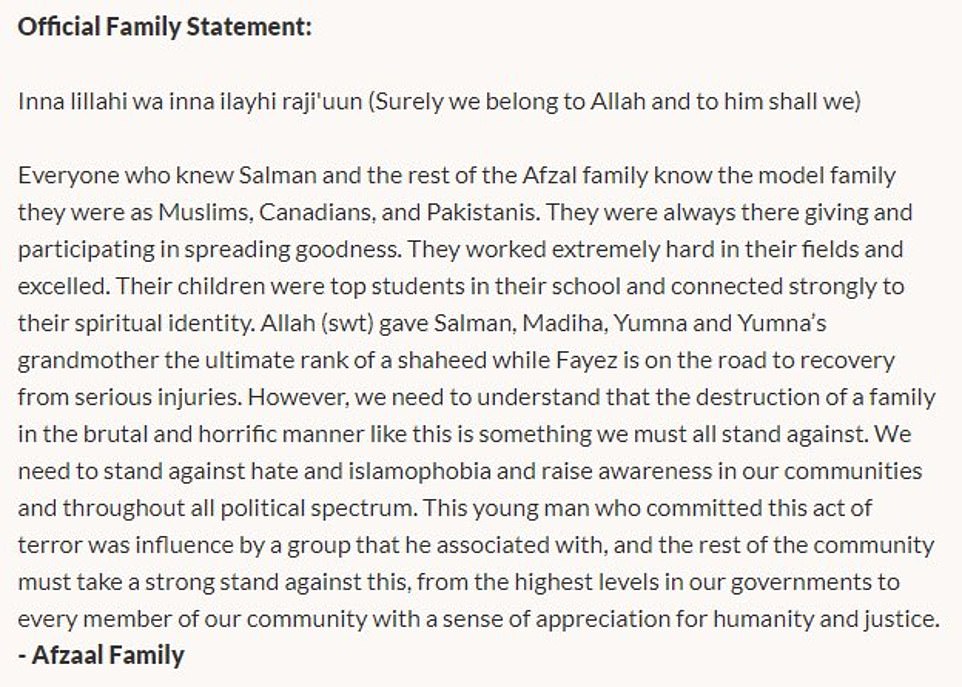 The victims’ extended family released this statement, calling on the public to stand together against Islamophobia and hate 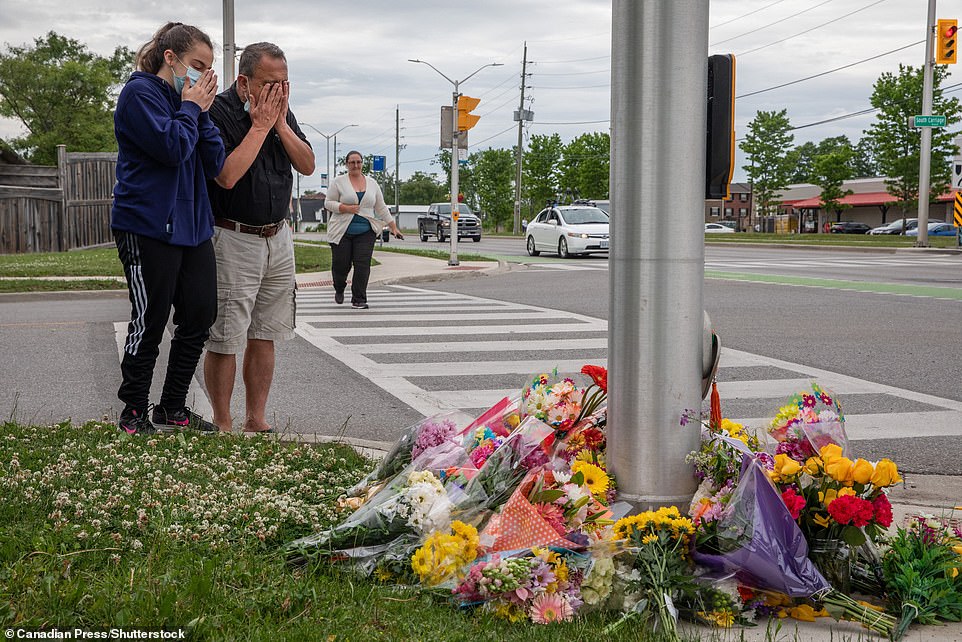 Mourners said prayers at the spot where the Muslim family were attacked on Sunday in London, Ontario, Canada, leaving four dead 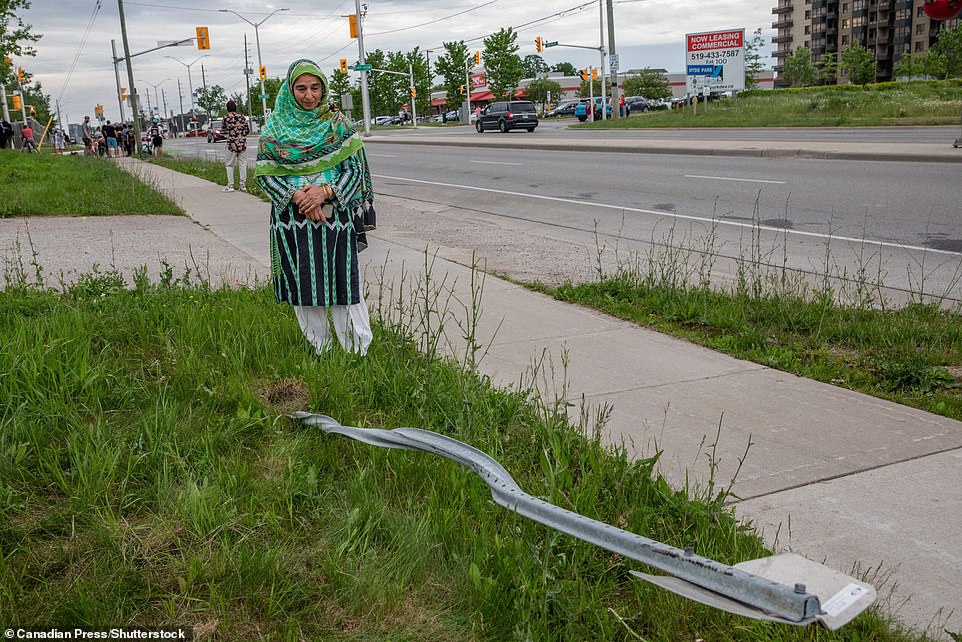 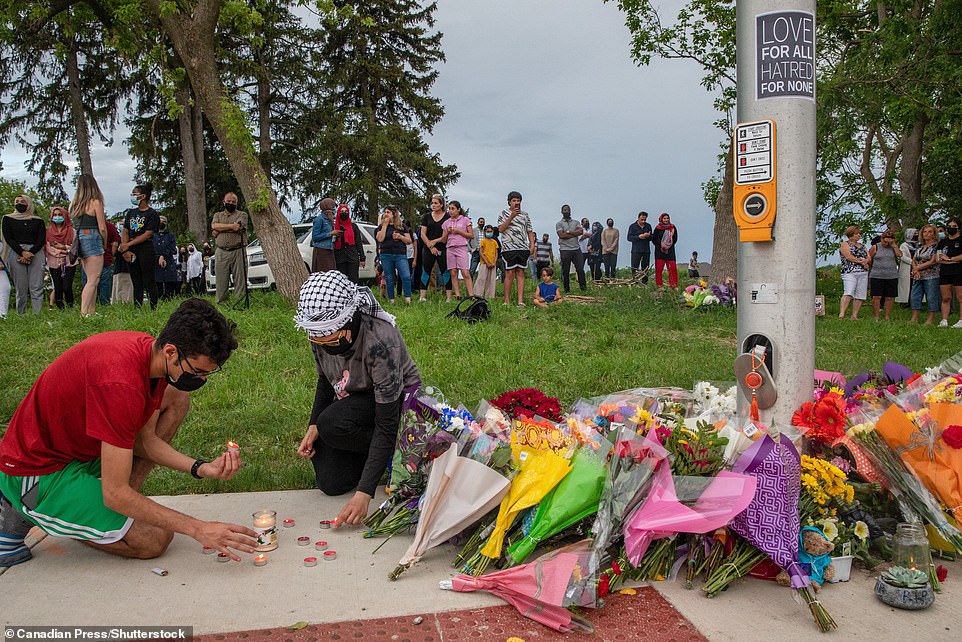 Abood, 18, left, and his sister Zeina Abdulhadi, 15, light candles at the makeshift memorial 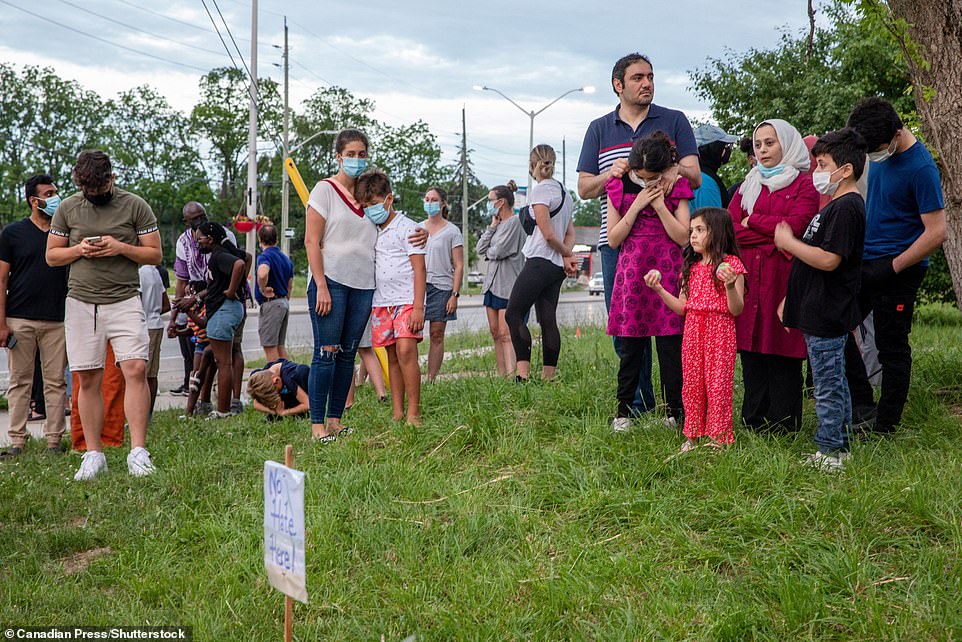 The makeshift memorial in London, Ontario, has been drawing large crowds since Sunday

The couple’s nine-year-old son, Fayez Salman, is in the hospital with serious but non life-threatening injuries.

The victim’s extended family released a statement, calling on the public to stand against hate and Islamophobia.

‘Everyone who knew Salman and the rest of the Afzal family know the model family they were as Muslims, Canadians and Pakistanis,’ the statement said. ‘They worked extremely hard in their fields and excelled. Their children were top students in their school and connected strongly with their spiritual identity.’

The statement continued: ‘this young man who committed this act of terror was influenced by a group that he associated with, and the rest of the community must take a strong stand against this, from the highest levels in our government to every member of the community.

Waight said police did not know at this point if the suspect was a member of any specific hate group.

He said London police are working with federal police and prosecutors to see about potential terrorism charges.

‘We grieve for the family, three generations of whom are now deceased,’ London Mayor Ed Holder told reporters. ‘This was an act of mass murder, perpetrated against Muslims, against Londoners, and rooted in unspeakable hatred.’

By late evening on Monday, a steady stream of mourners was seen arriving near the scene of the attack, dropping off flowers, lighting candles at the rapidly growing makeshift memorial, and saying prayers. One placard read: ‘When does it stop? Enough.’

Rauf Ahmad and three friends watched the tribute on the corner.

‘I didn’t think there was racism in Canada and I felt very safe when I came here two years ago, but I do not feel safe now,’ Ahmad said.

‘Humanity is first, we should not care about whether someone is a Muslim, a Jew or a Christian.’

A vigil was scheduled for Tuesday night at the mosque the family attended.

Oakridge Secondary School, where 15-year-old Yumna Salman was a student, released a statement, saying she ‘will be deeply missed by fellow students and staff.’

London, Ontario, is a city of 500,000 with a Muslim population of around 30,000 people just north of Lake Erie, which is the second fastest-growing in Canada, according to CBC.  Mayor Holder said Arabic is the second-most-spoken language after English in the city. 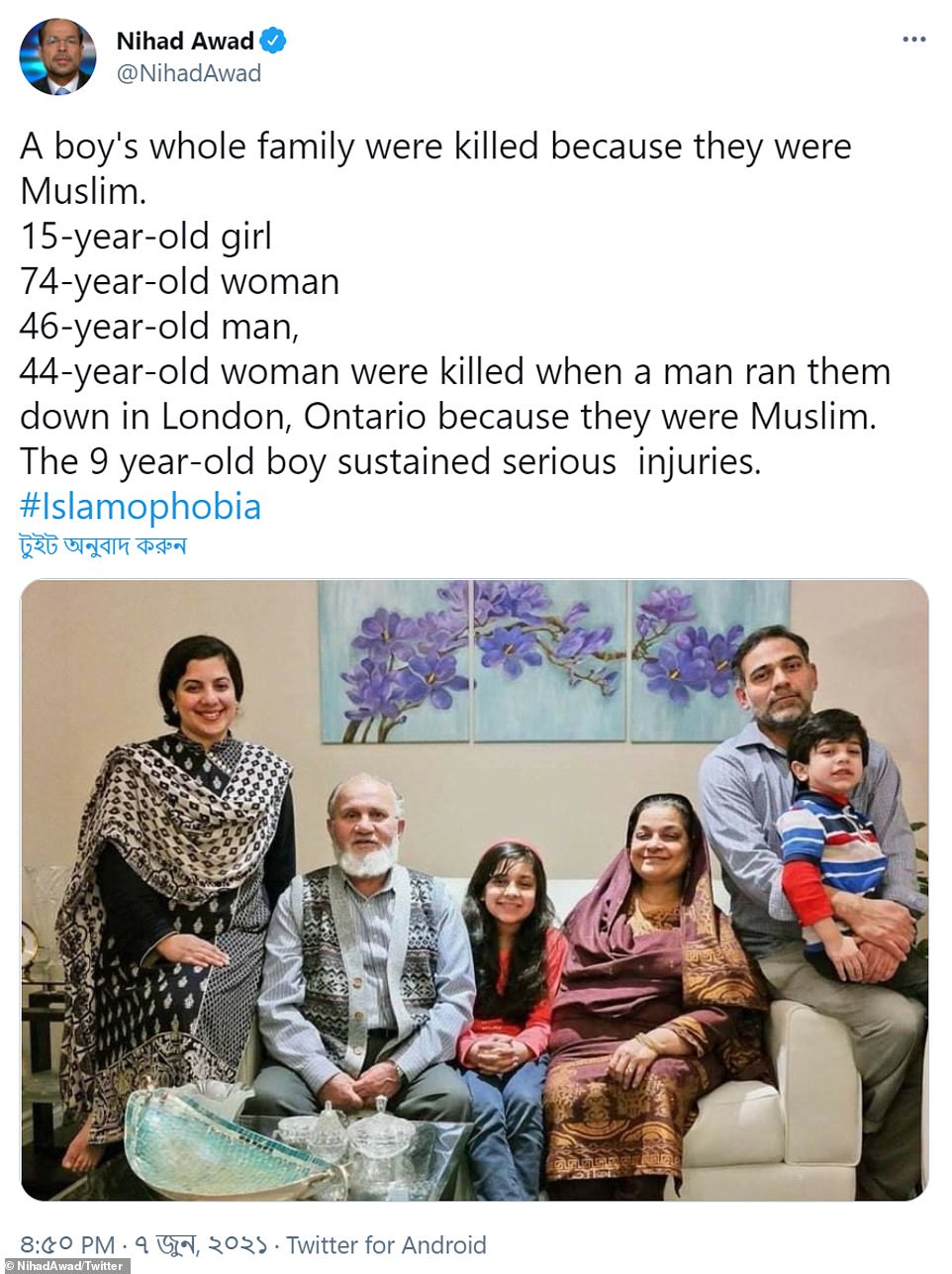 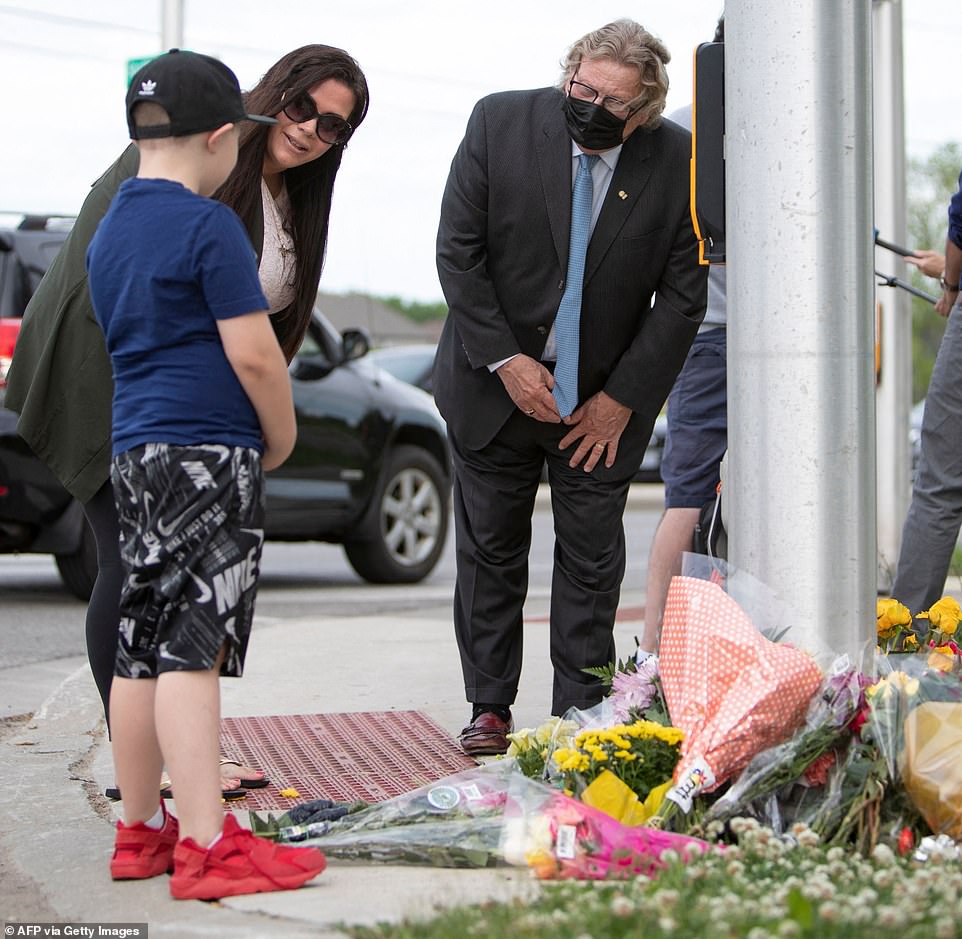 Ed Holder, the mayor of London, Ontario, visits the scene of Sunday’s crash on Monday. Four members of the same Muslim family died in the attack, and a child was seriously injured 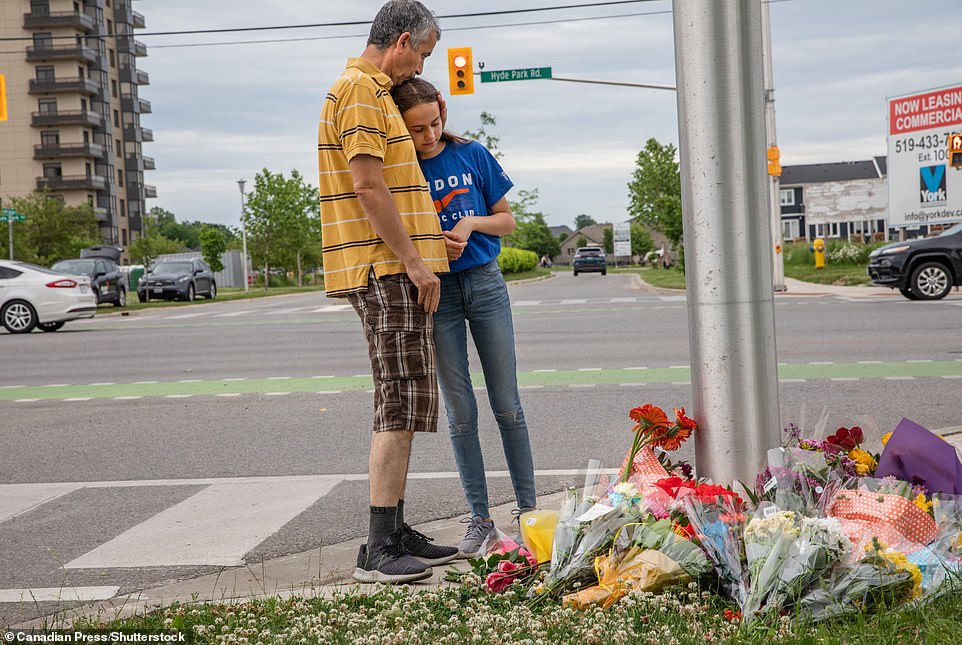 Flowers are left at the site where four members of a Muslim family – a grandmother, father, mother and teenage daughter – were mowed down by Nathaniel Veltman in his pickup truck. The tragedy took place in London, Ontario on Sunday 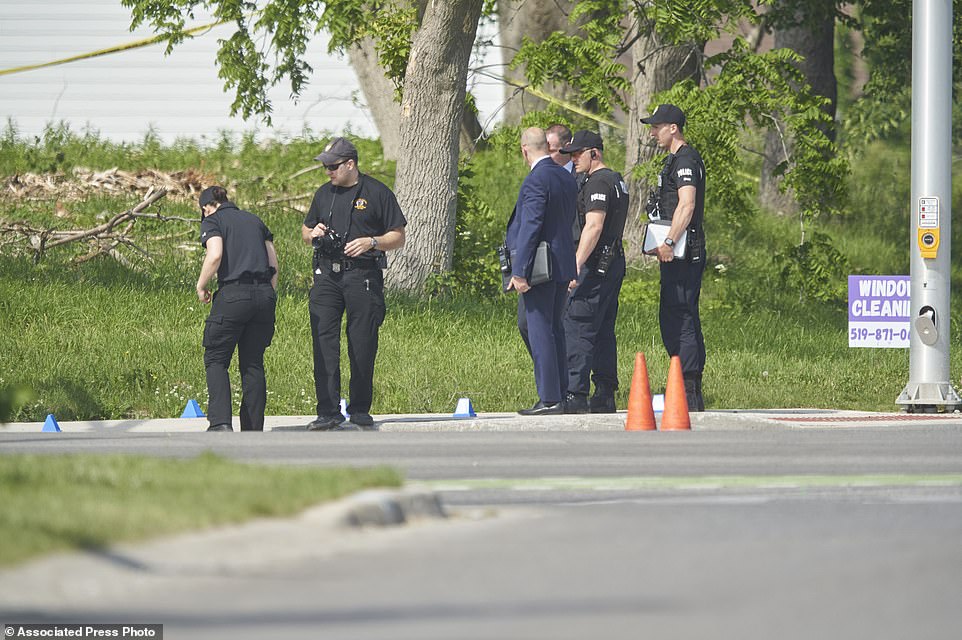 London police investigate on Monday the scene of a car crash in London, Ontario. Four people died when Nathaniel Veltman rammed his car into the family as they were out for a walk on Sunday evening

Veltman made his first court appearance on Monday over a phone line from London police headquarters.

Justice of the Peace Terry Steenson placed a publication ban on any evidence at the hearing.

The charges were read to him: one count of attempted murder of a youth ‘by striking him with a motor vehicle, namely a Dodge Ram pickup truck,’ and four first-degree murder charges.

Steenson said bail on murder charges can only be sought in the Superior Court of Justice and ordered Veltman into custody and to return to court on Thursday.

‘To the Muslim community in London and to Muslims across the country, know that we stand with you. Islamophobia has no place in any of our communities. This hate is insidious and despicable – and it must stop,’ said Prime Minister Justin Trudeau.

Ontario Premier Doug Ford said on Twitter that ‘justice must be served for the horrific act of hatred that took place.’ 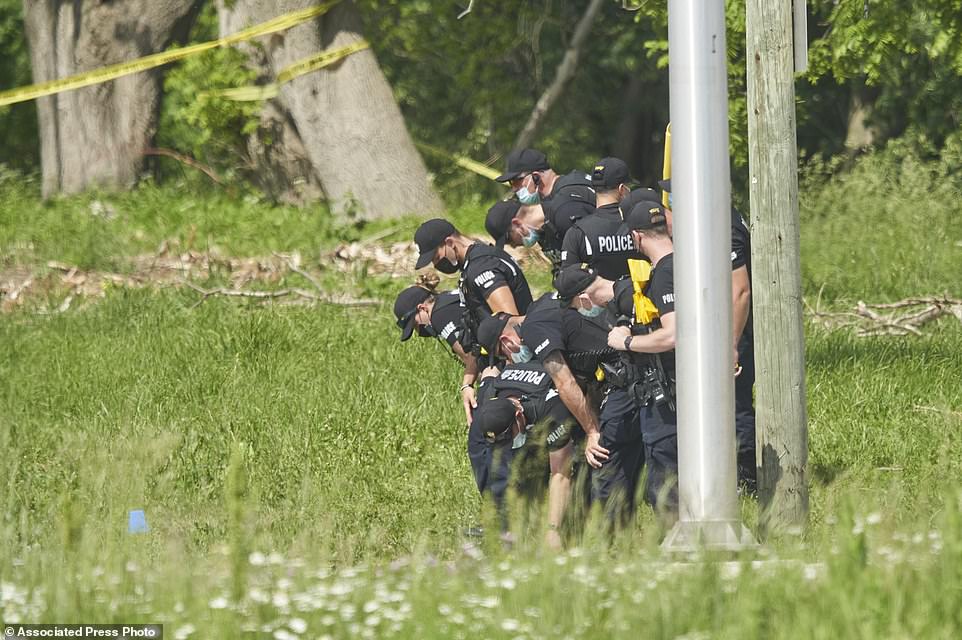 A line of police officers look for evidence at the scene of a car crash in London, Ontario on Monday. The victims, a family that immigrated from Pakistan 14 years ago, were out for their nightly walk at the time 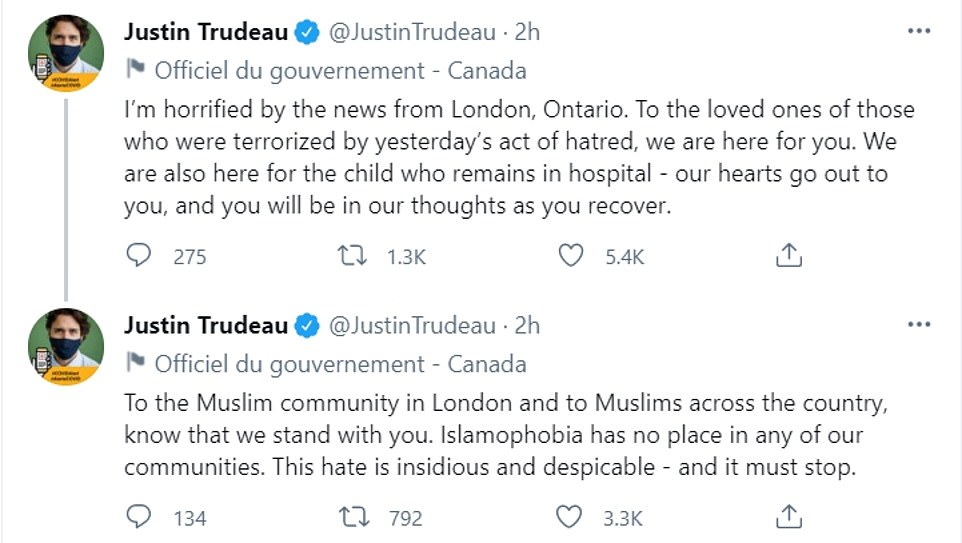 Detective Supt. Waight said Veltman was wearing a vest that appeared to be like body armor.

He declined to detail evidence pointing to a possible hate crime, but said the attack was planned.

About a dozen police officers combed the area around the crash site looking for evidence on Monday. Blue markers on the ground dotted the intersection.

‘We believe the victims were targeted because of their Islamic faith,’ said Stephen Williams, London police chief. 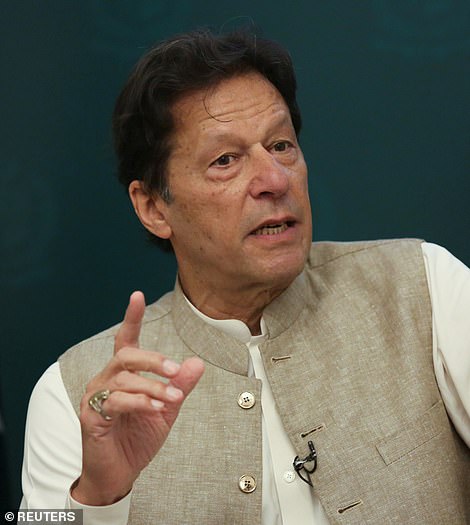 ‘We understand that this event may cause fear and anxiety in the community, particularly in the Muslim community, in any community targeted by hate.

‘There is no tolerance in this community who are motivated by hate target others with violence.’

Canada is generally welcoming toward immigrants and all religions, but in 2017 a French Canadian man known for far-right, nationalist views went on a shooting rampage at a Quebec City mosque that killed six people.

One woman who witnessed the aftermath of the deadly crash said she could not stop thinking about the victims.

Paige Martin said she was stopped at a red light around 8:30pm when the large pickup roared past her.

She said her car shook from the force.

‘I was shaken up, thinking it was an erratic driver,’ Martin said.

Minutes later, she said, she came upon a gruesome, chaotic scene at an intersection near her home, with first responders running to help, a police officer performing chest compressions on one person and three other people lying on the ground.

A few dozen people stood on the sidewalk and several drivers got out of their cars to help.

‘I can’t get the sound of the screams out of my head,’ Martin said.

From her apartment, Martin said she could see the scene and watched an official drape a sheet over one body about midnight.

‘My heart is just so broken for them,’ she said. 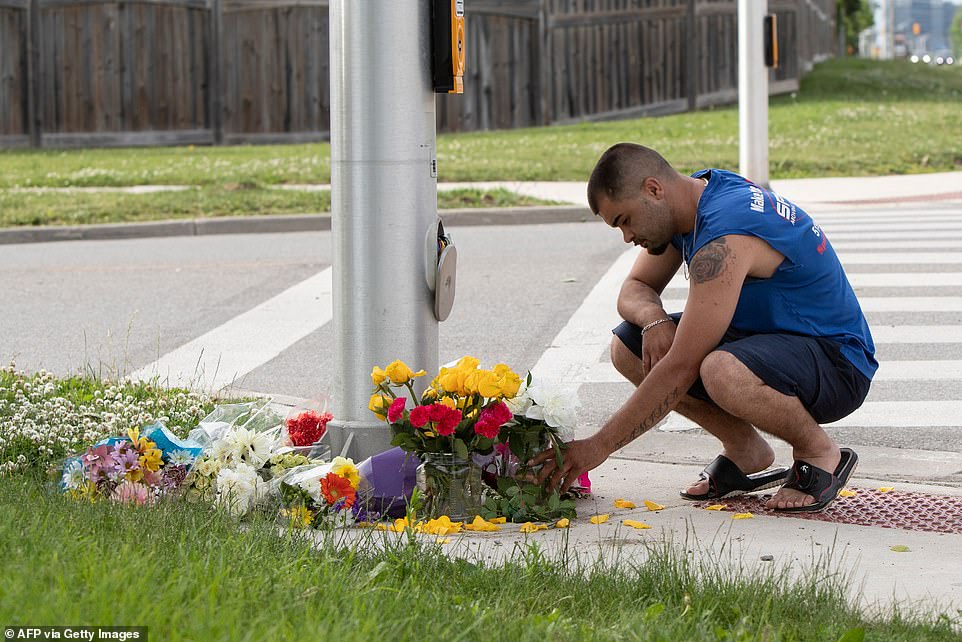 A shrine has blossomed in London, Ontario, in tribute to the four members of the Pakistani family who died in Sunday’s attack 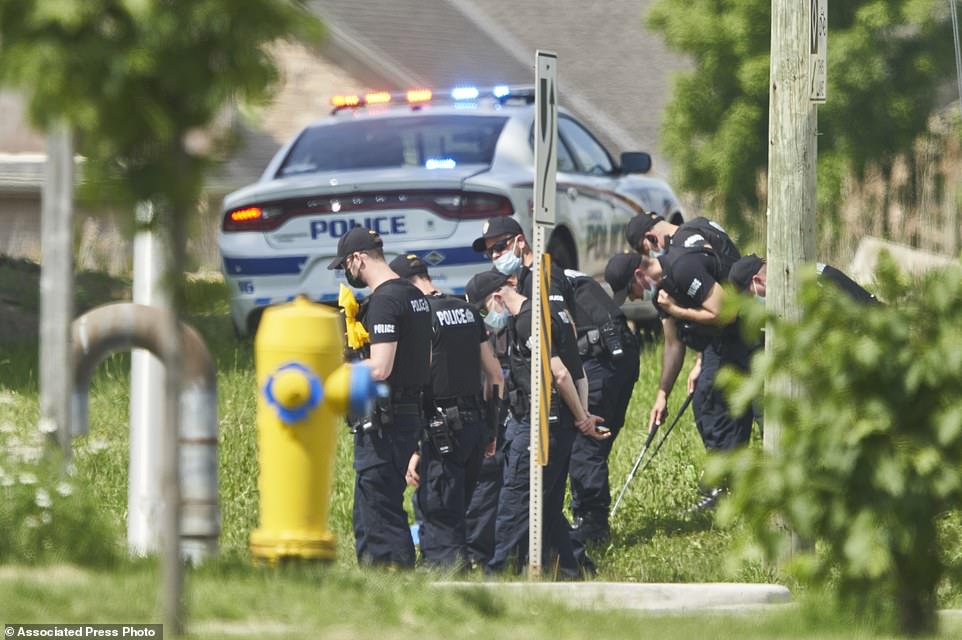 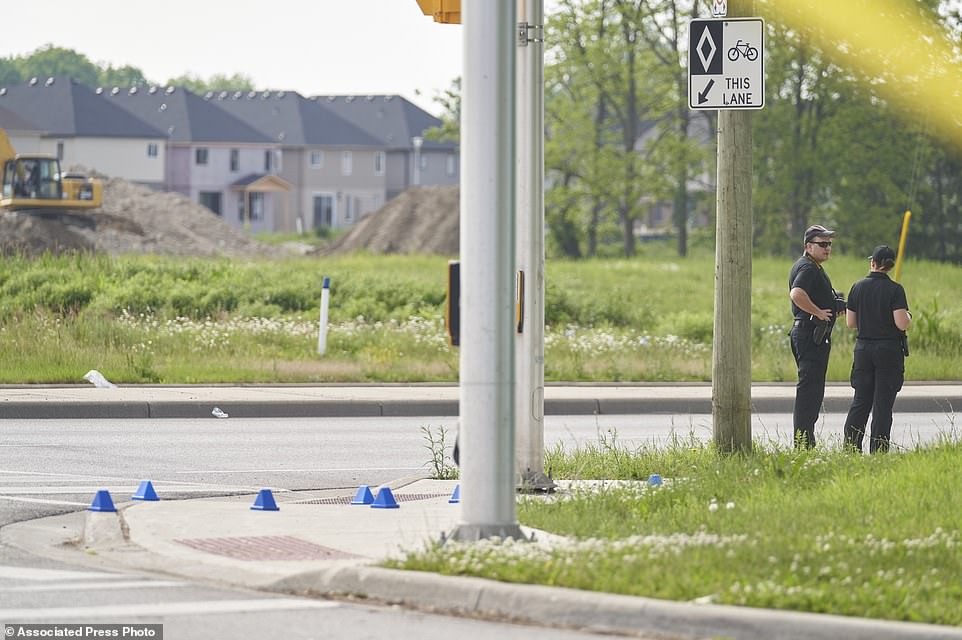 Zahid Khan, the family friend, detailed the three generations among the dead.

He said they were dedicated, decent and generous members of the London mosque.

‘They were just out for their walk that they would go out for every day,’ Khan said through tears near the site of the crash.

Qazi Khalil said he saw the family on Thursday when they were out for their nightly walk.

The families lived close to each other and would get together on holidays, he said.

‘This has totally destroyed me from the inside,’ Khalil said.

‘I can’t really come to the terms they were no longer here.’

Doug Ford, the premier of Ontario, said his province had no tolerance for ‘hate and Islamophobia’. 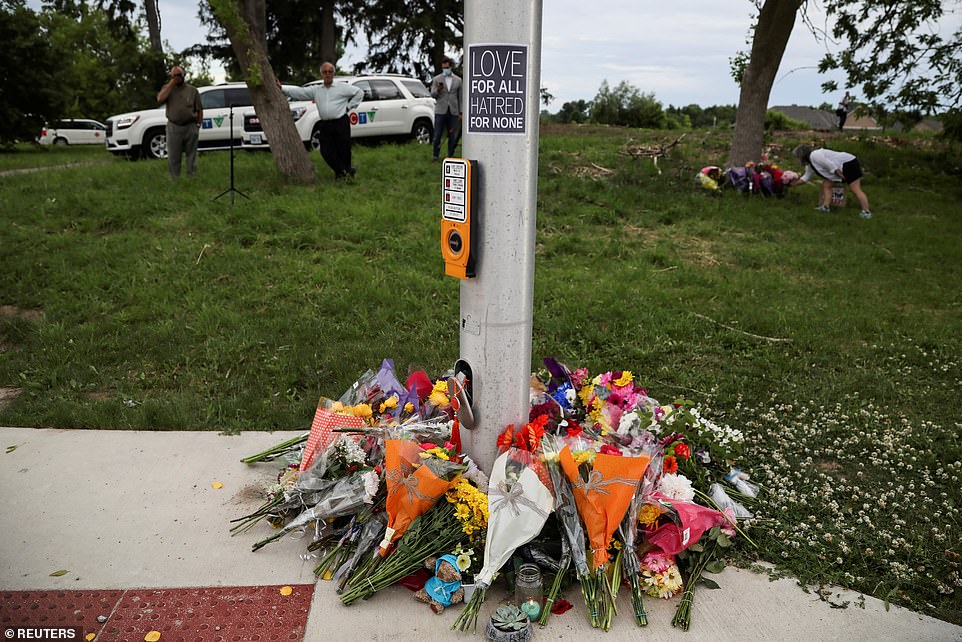 A sign posted at the site reads: ‘Love for all, hatred for none’. The accused perpetrator is facing four counts of murder

The National Council of Canadian Muslims said it was beyond horrified, saying Muslims in Canada have become all too familiar with the violence of Islamophobia.

‘This is a terrorist attack on Canadian soil, and should be treated as such,’ council head Mustafa Farooq said.

Nawaz Tahir, a London lawyer and Muslim community leader, said: ‘We must confront and stamp out Islamophobia and Islamic violence – not tomorrow, today, for the sake of our children, our family, our communities.’

‘Islamophobia needs to be countered holistically by the international community,’ Khan said on Twitter.

Covid Victoria: Melbourne's lockdown WILL end on Friday - but there will still be restrictions

Can we avoid another financial crisis? STEVE KEEN answers

NFL power rankings after Week 12 of the 2020 season

Victorian couple who fled the state during lockdown and went on an interstate road trip through...