Sydneysiders who were fined for using their phones during a six-hour gridlock wait in Bondi’s drive-through Covid testing clinic will not need to pay, police say.

Close to 30,000 residents across NSW raced to testing clinics across the state on Saturday as Sydney’s northern beaches cluster surged with 28 new Covid cases.

But some cautious residents in the city’s eastern suburbs who rushed to their local testing clinic by Bondi Beach were met with $349 fines and the loss of five demerit points for using their phones as they waited for a swab inside their cars.

Daily Mail Australia spoke to three motorists who had been approached by officers while waiting in queue on Saturday, with NSW Police then confirming nine people were given Traffic Infringement Notices for mobile phone offences. 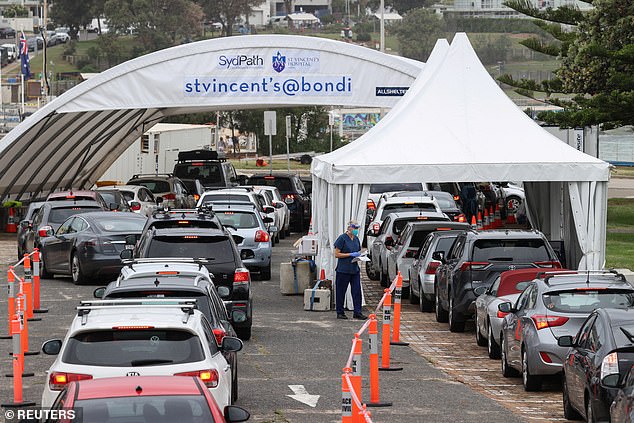 NSW Police have since announced they have reviewed the fines and the majority of the recipients will not be forced to pay the penalties.

‘Following a review, the infringements, excluding two, were rescinded and the drivers have received a caution,’ a police spokesperson said on Monday.

A NSW Police spokesperson told Daily Mail Australia they could not confirm whether their fine procedures would be relaxed for motorists in testing queues in the future, as each matter depends on individual circumstances.

It comes after one man, who asked to remain anonymous, told Daily Mail Australia he had been hit with the hefty fine for using his phone while waiting in the hours-long queue.

Another woman took to Facebook after she saw officers taking photos of motorists’ licence plates and writing up penalties for drivers around her.

She claimed an officer approached her car as she waited in the queue on Saturday and told her she was ‘lucky’ the Kindle device she was reading wasn’t a phone.

‘Did anyone else nearly get fined in the Bondi drive through the Covid testing line?’ she wrote online.

‘It was a six hour wait and there was a cop walking around making sure no one was on their phones.’

Her post sparked outrage, with many slamming the incident as a ‘revenue raising’ exercise.

The woman, who wished to remain unnamed, told Daily Mail Australia she believed the officer approached her because her keys were in the ignition.

She said she would understand if the police were politely reminding drivers to refrain from using their devices in the line.

However, she said the officer was extremely rude, remarking ‘do you have enough petrol’ to get through the wait, before walking away.

‘The line was right up the hill at North Bondi and I had already been in the line for two hours,’ she said. 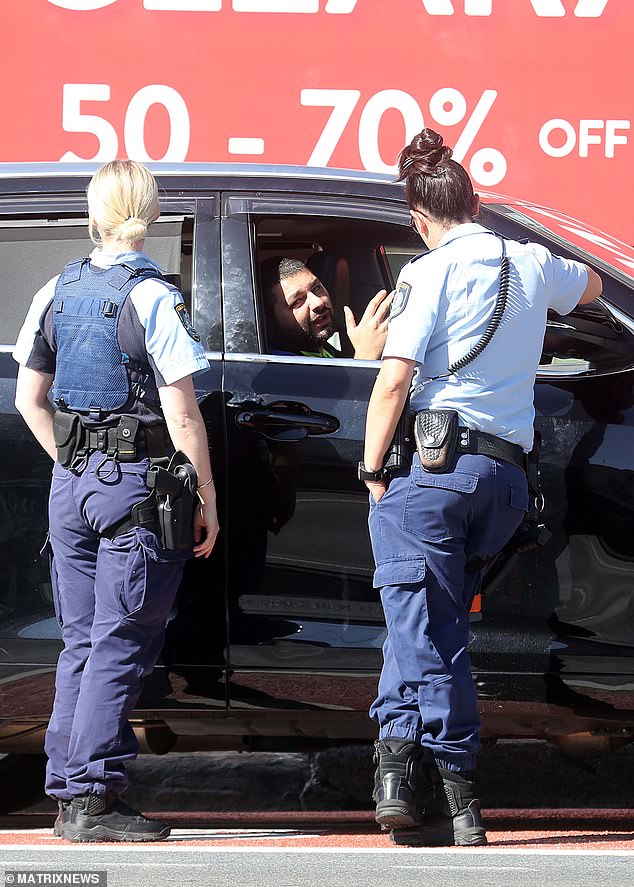 The woman said she saw police officers taking photos of number plates and writing up infringement notices. Pictured: Police are seen speaking to a driver in Bondi for an unrelated incident in April

‘I would have understood if he was politely issuing a reminder but the whole situation seemed unfair.

‘Everyone is sick, they had been lining up for six hours on a Saturday. It just felt a bit cruel to be targeting motorists in a coronavirus queue.

‘Especially because everyone is doing the right thing, lining up to get tested.’

Another woman who left her house early on Saturday morning in a bid to beat the crowds at Bondi said she was subjected to similar treatment.

‘I pulled up alongside the road waiting… we didn’t move for ages,’ she told Daily Mail Australia.

‘I think I even had my car off, my dog was sitting on my lap and I was playing with my phone.’

The woman said a police officer ‘scared the hell out of her’ by tapping her window and threatening to give her two tickets – one for driving while using a mobile phone and another for having a pet in her lap.

‘I felt like going “get stuffed, I’m trying to do the right thing here”,’ she said.

In NSW, It is illegal to video call, text, email, take photo, use social media or browse the internet unless parked.

Phone calls, and audio and music functions are permitted only if the phone is secured in a cradle fixed to the vehicle or can be operated without touching any part of the device.

NSW recorded 15 more Covid cases on Monday and a further eight on Tuesday – all of which are linked to the northern beaches cluster.

Chief Health Officer Dr Kerry Chant said some patients caught the virus outside the northern beaches but all cases have been linked back to two events at the Avalon RSL and the Avalon Bowlo last week.

More than 100 venues across Sydney have been placed on coronavirus alert, with visitors on certain dates urged to get tested and self-isolate immediately.