It’s difficult to discern what most disappointed the fans of Jack Nicklaus who declared themselves upset by his endorsement of Donald Trump: that Nicklaus held such a view, or that he voiced it. Because neither can be at all considered a surprise.

Expressions of shock that a wealthy, 80-year-old Florida country clubber supports Trump demand a particularly melodramatic strand of pearl-clutching, but that didn’t deter critics who rounded on Nicklaus in an episode that exposed ample willful delusions to go around.

Start with those golf fans who apparently assumed that the on-course qualities for which they lionized the 18-time major champion—winning with class, losing with grace, abiding professionalism and decency—would be equally evident in his choice of presidential candidate. That such is not the case says less about Nicklaus than about the fatuous nature of sports idolatry, in which credulous people expect their heroes to embody virtues entirely unrelated to their high accomplishment in the arena.

Nicklaus readily exposed his firmly-held fantasies too, ranging from his debatable assertion that Trump “worked for the average person” to his laughably feverish contentions that No. 45 is “diverse” and America is hurtling toward socialism. In a subsequent interview with the Palm Beach Post, he went on to suggest hospitals are deliberately exaggerating COVID deaths for financial gain and that his own case was cured in two days by taking hydroxychloroquine, a controversial cure pushed by the president despite numerous clinical studies indicating no benefit from the drug. 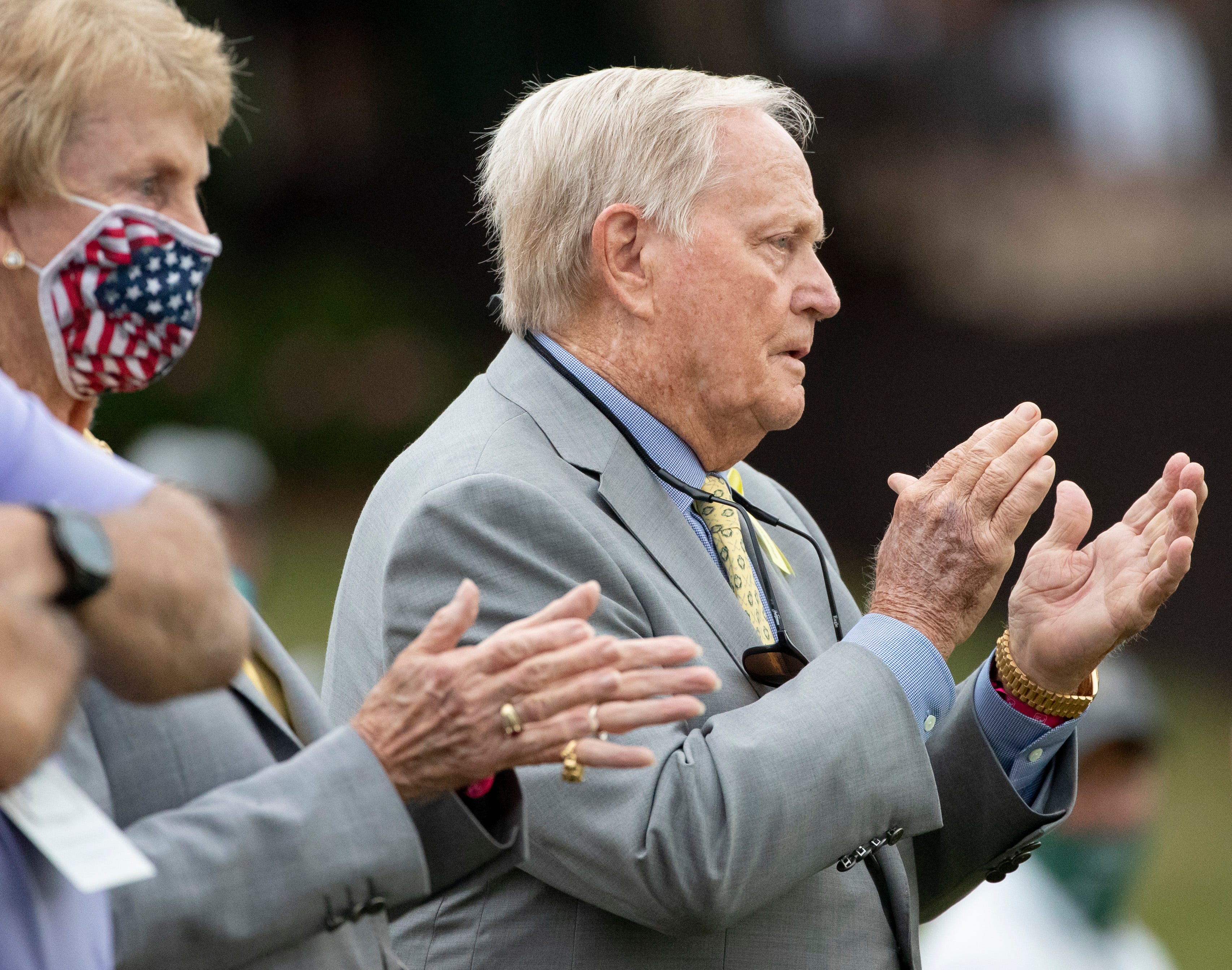 Jack Nicklaus with his wife Barbara at the 2020 Memorial Tournament at Muirfield Village Golf Club in Dublin, Ohio on Sunday, July 19, 2020. Photo by USA TODAY Sports

This kind of outlandish tripe from a respected public figure would usually attract the social media firing squad, but Kim Kardashian’s birthday party hardships drew the harshest volley of shots in another direction.

In all of this, two truths are absolute: Nicklaus is free to believe what he wants and to support whomever he chooses for public office; and he is not immune to scrutiny and criticism for his positions.

Nicklaus has long been a vocal Republican and no wallflower when it comes to election campaigns. In 2012, he rallied in Ohio for Mitt Romney and admitted that he had always wondered if his refusal to campaign in his home state for Gerald Ford had cost Ford the ’76 election. The preening self-regard a man must possess to think his personal absence might have cost someone the presidency is awesome to consider.

There is a yawning chasm between supporting Romney and supporting Trump, but Nicklaus is not alone among Hall of Famers in bridging that character gap as easily as one would a stream on a mediocre golf course. Nancy Lopez was equally full-throated in her support for Trump last week. Faced then with criticism on social media for her stance, she tweeted: “I never realized that people are truly that angry and mean.”

Lopez apparently doesn’t devote much time to watching the man she endorsed or her fellow supporters.

Whatever presidential preference Nicklaus or Lopez expressed risked causing rancor in a hyper-polarized environment. And regardless of their choice in candidates, their unimpeachable careers have earned both the right to be taken seriously when they speak on issues of integrity, honesty, character and fealty to the rules. But it’s wishful thinking to believe they won’t find themselves shadowed by charges of hypocrisy given their enthusiastic support for a man manifestly destitute of any of those qualities.

Just this weekend, it was widely reported that Trump has told confidantes that he will declare victory on election night if early returns show him “ahead.” If that charlatan standard were applied in golf, Nicklaus might have twice as many majors and Lopez a handful of U.S. Women’s Opens.

Scorecards and ballots both require counting. But then, the consistent application of standards isn’t much in vogue in politics or sport these days. If it were, the people who rushed to Nicklaus’s defense when he was assailed for expressing his views would have extended the same courtesy to Colin Kaepernick.

Whatever happens on November 3 and in its aftermath, the stain of Trump will not be erased. In America or in golf.

Jack Nicklaus on tweet supporting Trump: I knew ‘it was going to cause me some grief’ but ‘I think he’s been great’

Jack Nicklaus explains why he voted for President Donald Trump

John Daly after being Trump’s guest at debate: ‘He’s like me and Jesus’

The price of Chainlink (LINK) recently skyrocketed to a brand-new all-time high at $22.06. The coin...