His advice helped J.K. Rowling to maximise her £820 million fortune, but literary agent Neil Blair is now involved in a High Court battle over advice he received.

I can disclose that Blair is suing a law firm for £2 million, alleging it advised him to invest in a tax avoidance scheme even though it should have known it would later fall foul of Government rules.

He claims the firm, Fieldfisher, said he’d be able to set off losses against other income in the tax avoidance scheme created by investment management company Ingenious, which was also a Fieldfisher client.

The writ says Fieldfisher ‘failed to exercise the level of competence, skill and diligence expected of reasonable solicitors’.

It adds: ‘It acted negligently and in breach of its contractual and common law duties’ to his business, the Blair Partnership.

Blair’s been Rowling’s agent since she ditched her long-term business partner, Christopher Little, in 2011. 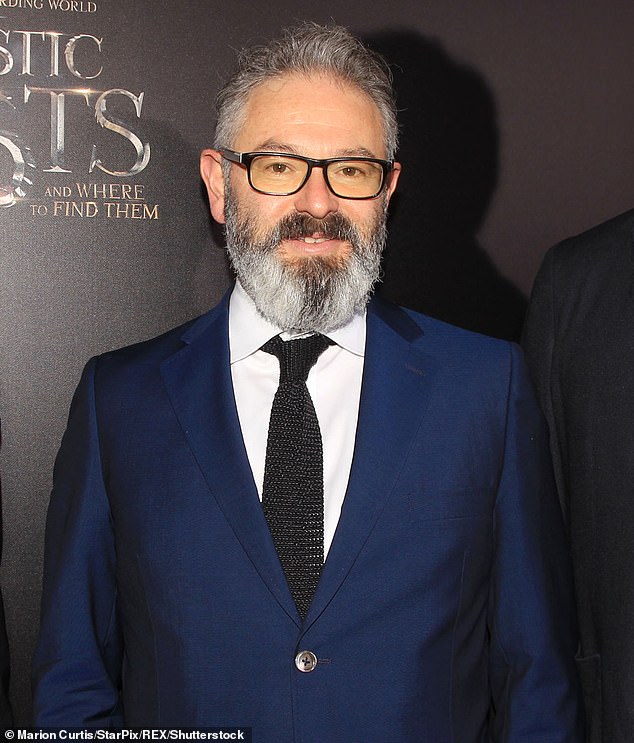 Blair had left Little’s company to start his own agency.

It was recently revealed that Little, who died earlier this year aged 79, was paid £10 million compensation after he was forced out of the Harry Potter franchise.

A Blair Partnership spokesman tells me: ‘At the time, it was advised that this was a legitimate way for Mr Blair to invest.

‘All tax due has been paid. J.K. Rowling is not involved in any way.’

FOOTWEAR AWARDS? NICKY IS A SHOE IN

When it comes to putting her best foot forward, hotel heiress Nicky Hilton is a pro.

Invited to the ‘Shoe Oscars’, she made sure everyone noticed her £907 silver Mach & Mach pumps by wearing a daring thigh-split dress by Prabal Gurung that cost £3,000. 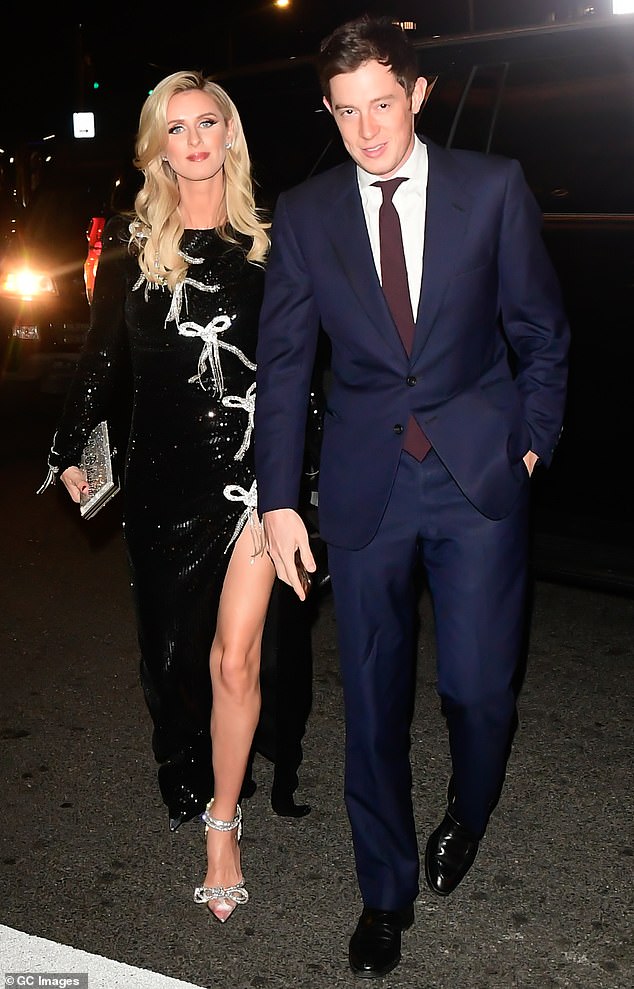 Invited to the ‘Shoe Oscars’, Nicky Hilton (pictured with her husband James) made sure everyone noticed her £907 silver Mach & Mach pumps by wearing a daring thigh-split dress

‘Tis the season to sparkle,’ says Nicky, 38, who was at the Footwear News Achievement Awards in New York to support her mother, Kathy, who received the Icon prize.

The Wham! singer anonymously paid for the Highgate festive tree and was the largest private sponsor of the fair before his death on Christmas Day 2016.

And Chris Underhill, whose estate agent firm is organising this year’s £16,000 lights, says: ‘George Michael was our secret benefactor for many years, and he loved the Christmas lights.

‘Luckily, his estate continues to support us even after his death.’

The Royal Family may seem beset with problems at the moment, but the Countess of Wessex is determined to spread some Advent cheer.

Sophie wore a red Father Christmas hairband and puffed hard into a party blower during her visit to a Disability Initiative in Surrey yesterday. 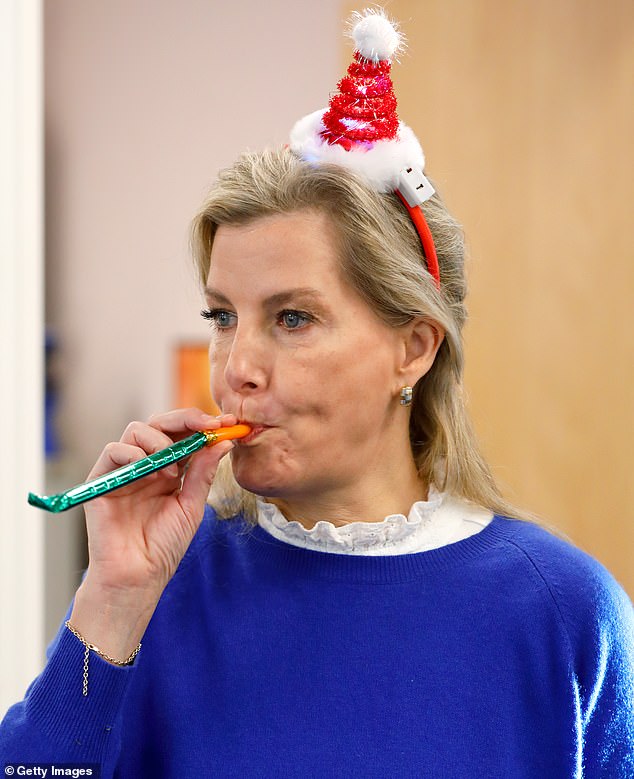 The Royal Family may seem beset with problems, but the Countess of Wessex was determined to spread some Advent cheer during her visit to a Disability Initiative in Surrey yesterday 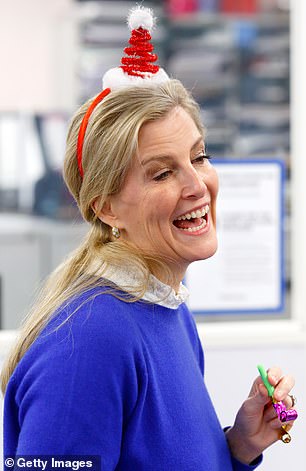 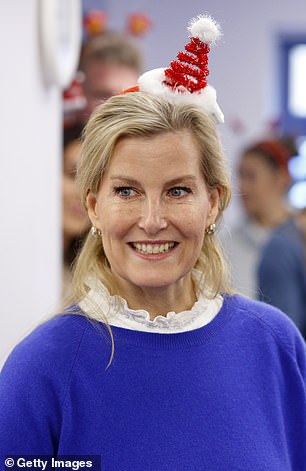 Sophie wore a red Father Christmas hairband and shared a joke with clients of the scheme in Camberley, as well as joining in to make chocolate sculptures and wreaths

Wearing a navy blue jumper with a white ruffled shirt underneath, Prince Edward’s 56-year-old wife shared a joke with clients of the scheme in Camberley, as well as joining in to make chocolate sculptures and wreaths.

Well, now he’s being touted as a feminist spokesman.

‘The Squeaker’, as he was nicknamed by critics, will co-present a new podcast with Deborah Frances-White, who’s known as The Guilty Feminist.

She’ll be learning from Bercow ‘how to use power for good’. I wonder what his Commons staff will make of it?

He was accused of leaving his female secretary with PTSD after an alleged bullying campaign. Bercow has always denied allegations of bullying.

BIGGINS’S CAREER AS A DAME? IT’S BEHIND YOU

‘The day will come when they’ll say a dame, which is essentially a male character in women’s clothing, will have to be played by a woman,’ he laments at a charity auction of a portrait of the Marchioness of Bath, hosted by Grove Square Galleries in London. 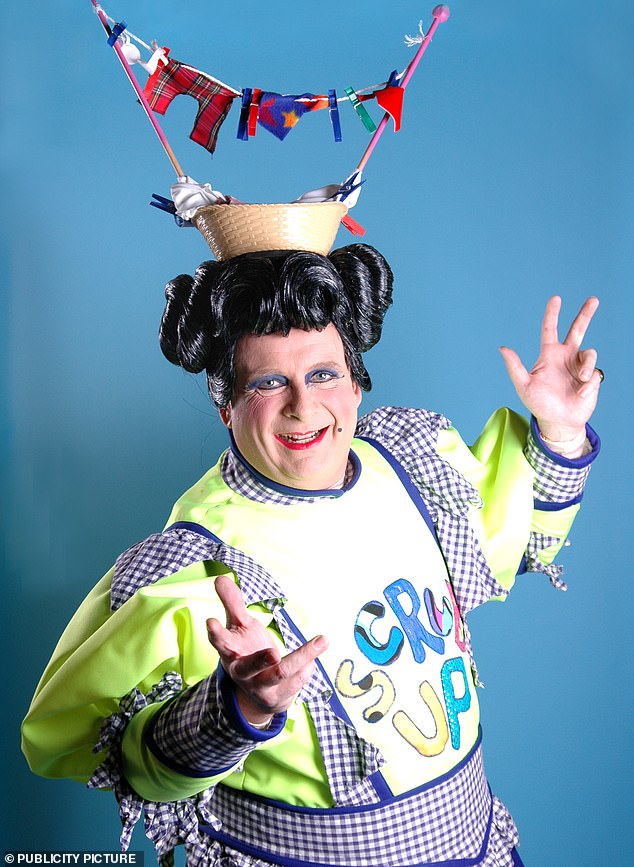 Christopher Biggins (pictured), who plays a dame in Jack And The Beanstalk, said panto dames are doomed as there will come a time when a dame will ‘have to be played by a woman’

The principal boy in pantomimes used to be played by an actress, but that tradition has largely been ditched.

‘The whole thing is ridiculous,’ says Biggins, 72, who plays a dame in Jack And The Beanstalk at the Orchard Theatre in Dartford, Kent.

As he gears up to play feline-loving artist Louis Wain on the big screen, Benedict Cumberbatch muses: ‘I like cats, but I compare it to living with a supermodel. I admire them, but they are a little bit daunting.

‘There’s a little bit of fear involved — whereas dogs are a bit more dopey.’

Playing Wain, a 19th-century painter known for his paintings of large-eyed cats, is clearly a three-pipe problem for the Sherlock star.

Alec Baldwin, on the ‘Rust’ tragedy: “I didn’t pull the trigger” | Culture