EDEN CONFIDENTIAL: Toff and her ‘Posh’ ex-con spark rumour they are back together with lunch

I’m A Celebrity winner Georgia Toffolo was said to have split up with financier ‘Posh George’ Cottrell, who was once jailed for fraud.

But I can reveal that the pair are very much back together.

Former Made In Chelsea star ‘Toff’, 27, is pictured here enjoying a long, leisurely lunch at Italian restaurant Scalini in West London, with the 28-year-old who was an aide to Nigel Farage when he was the UKIP leader. A fellow diner tells me: ‘They sat at a table in the street and chatted to passers-by.’ 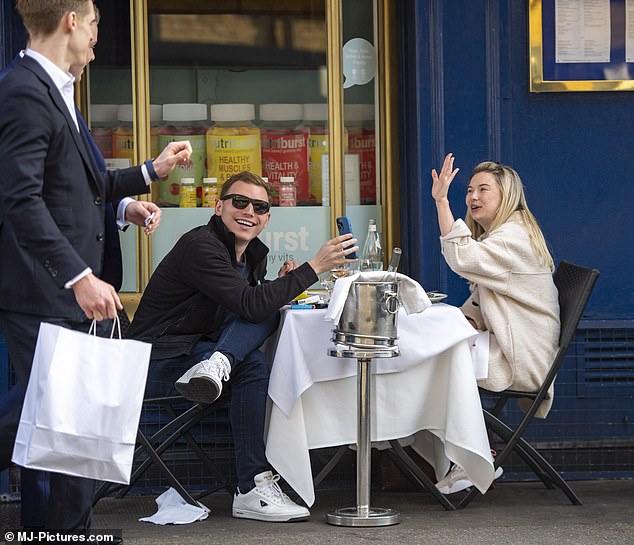 Posh George is said to have a £300 million fortune. But he played up to his wide-boy reputation by paying for lunch with a wad of notes.

Georgia has always been cagey about her relationship with Cottrell, who spent eight months in jail in the U.S. in 2016 in connection with a money-laundering conspiracy.

Earlier this year, she came under fire herself for a new partnership with a controversial cryptocurrency business. 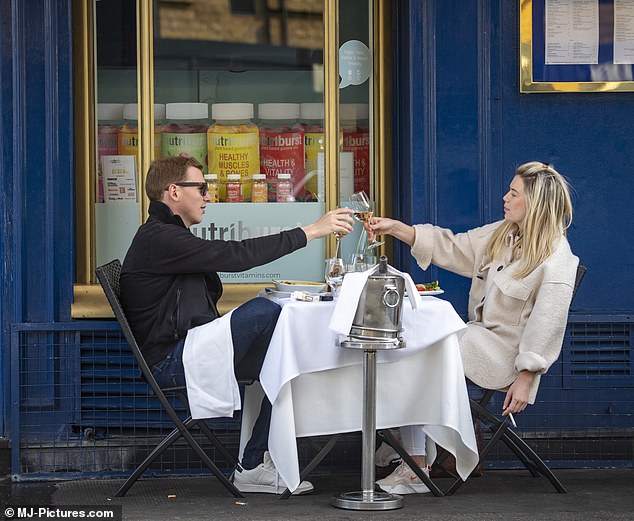 Posh George is said to have a £300 million fortune. But he played up to his wide-boy reputation by paying for lunch with a wad of notes

Toff, who is a friend of senior Conservative figures including the Prime Minister’s father Stanley Johnson, announced a tie‑in with fintech group Mode, which was criticised for allegedly misleading investors. She told her Instagram followers that she had been investing in cryptocurrency for ‘quite a long time’.

Mode claimed it had affiliate tie-ins with companies including Boots, Ocado and Homebase. But all three swiftly denied having anything to do with the company, and shares in Mode plummeted by 14 per cent.

Posh George is said to have a £300 million fortune. But he played up to his wide-boy reputation by paying for lunch with a wad of notes

Fracking is the future, says MP

Former Environment Secretary Andrea Leadsom says she’s in favour of fracking as a solution to the energy crisis — only don’t call it that.

Incidentally, wouldn’t she boost her green credentials by changing her name from Leadsom to Leadfree?

Talk about the houses of Windsor! An ‘exciting new opportunity’ has arisen for an experienced lettings manager on the Queen’s private Sandringham Estate in Norfolk. The successful applicant will be paid a ‘competitive’ salary for the position, which includes undertaking annual property inspections and rent reviews ‘on our 370 residential let properties’. It also includes overseeing the lettings of the estate’s holiday cottages.

Mother of God! Audience members at an arts event got a surprise when the daughter of Line Of Duty star Adrian Dunbar started breastfeeding her baby while she was on stage.

‘Here I am breastfeeding and hosting at the same time,’ explained Madeleine Dunbar, who compered the Mum’s The Word show in South London which featured live music, poetry, and DJs. The actress, 34, (pictured left with her dad), who gave birth to daughter, Zephyr, before Christmas, did put her baby down before launching into a particularly energetic dance number.

The Great British Bake Off’s former presenter Mel Giedroyc is worried she didn’t bring up her teenage daughters well because they have tattoos — but now she’s getting one herself.

Talking about her girls, she says: ‘They’ve both got tattoos. That’s probably bad — somewhere along the line I didn’t do my job correctly. But I’m going to have one done [a seahorse] in two weeks, bigger and better than theirs.’

Dancer Neil Jones, who was partnered with Mel for last year’s Strictly Christmas Special, is training to be a tattoo artist and she has agreed to be his guinea pig.

A controversial former boss of the Royal Mail has won the stamp of approval for his new £5 million dream mansion.

Adam Crozier, 58, who oversaw the closure of 5,800 Post Office branches, spent £3 million on a five-bedroom house on a private estate in Surrey. The £700,000-a-year chairman of BT has just been given local council permission to demolish the 1960s-built property and build a five-bedroom ‘Arts & Crafts’-style mansion with special provision for his learning disabled adult daughter. The house will also feature a snug, verandah, and a comms and electrics room.