‘I’m just happy to be back on a pitch and scoring a beautiful goal’: Eden Hazard delighted to end his nightmare run of almost 400 DAYS without a goal after netting stunning strike in victory over Huesca on return from injury

Eden Hazard was thrilled to end a year-long absence from the scoresheet for Real Madrid as he netted a ‘beautiful goal’ in his side’s 4-1 drubbing of Huesca.

The 29-year-old fired home with his left foot from nearly 30 yards out to put Zinedine Zidane‘s side in front against Huesca on Saturday on his return from injury.

Real secured a comfortable 4-1 victory that moved them back to the top of LaLiga, with Karim Benzema scoring twice and Federico Valverde adding the other. 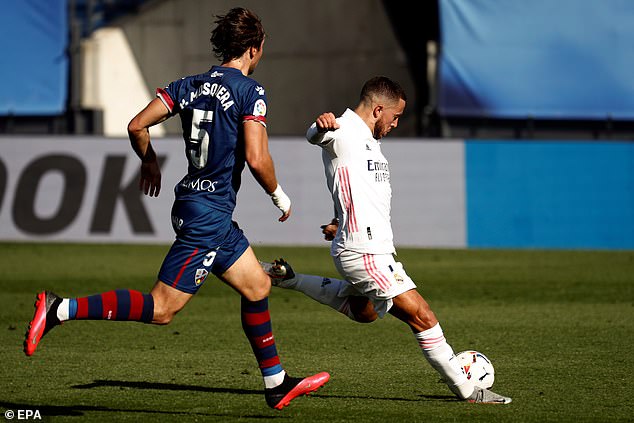 Hazard’s goal ended a wait of 392 days and was just his second for the club since joining from Chelsea, for an initial £88million in the summer of 2019.

The Belgian star was delighted as he recorded a short video message for his fans which was Tweeted by Madrid’s account after the match.

‘Hi, guys! I’m just happy to be back on a pitch, (and) score a beautiful goal,’ the Belgium international said. 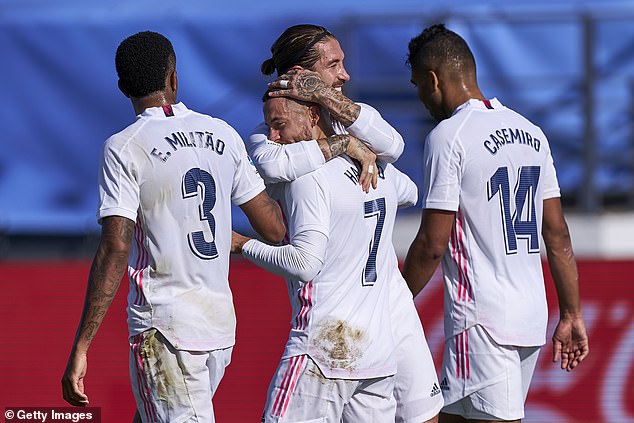 Hazard didn’t create a chance for his team mates, nor did he produce a cross during his hour on the pitch, however his link up play with Benzema was very encouraging, one such move leading to Valverde’s crucial third goal.

‘We are happy with Hazard’s game and happy with what we did today. He has no discomfort, he is happy with his goal, his teammates are happy with him. It’s a victory, it’s four goals, three points and you have to be happy,’ boss Zinedine Zidane said afterwards. 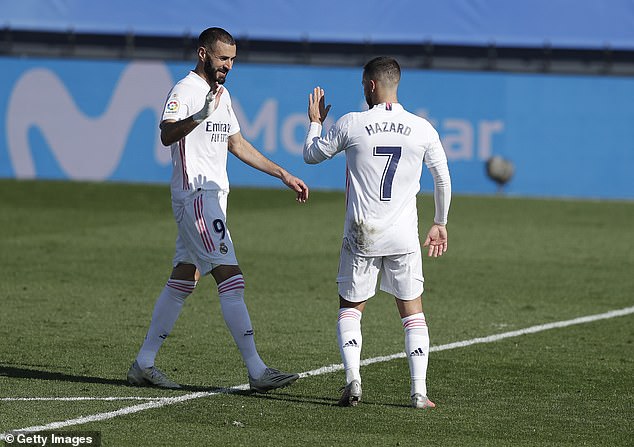 ‘What Hazard did was magnificent. We saw that in the first goal,’ he told Movistar after the game. ‘It gives you an idea of the category of player we’re talking about.

‘From then on, the team felt more comfortable. Being effective up top helps the game to go how you want it to.

‘He has had back luck since he came due to injuries. He’s a winner and what he wants is to be out on the pitch and helping the team. Hopefully, we can have him like this because he makes the difference.’