Students at universities hit by coronavirus should seek tuition fee refunds if the quality of their course slips, the higher education watchdog said last night.

At least 40 universities have recorded virus cases – around one in four – leaving thousands of students locked down in halls.

They have complained of ‘disgusting’ conditions as they are essentially sealed off from the outside world.

The situation has caused growing anger over the prospect of no face-to-face learning despite fees of up to £9,250 per year.

The Office for Students (OfS) regulator has now urged students who feel the quality of their education has been affected to complain, warning universities not to take a ‘blanket policy’ against refunds.

Chief executive Nicola Dandridge said: ‘Students have a right to good quality higher education – whether that is taught online, in-person or a mixture of the two. 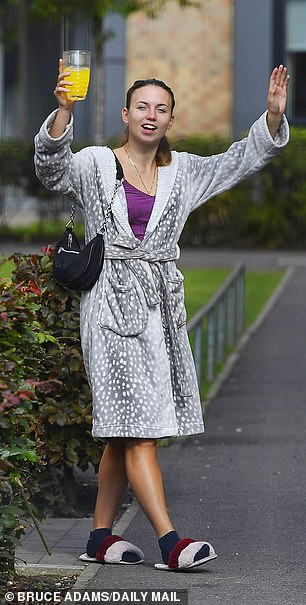 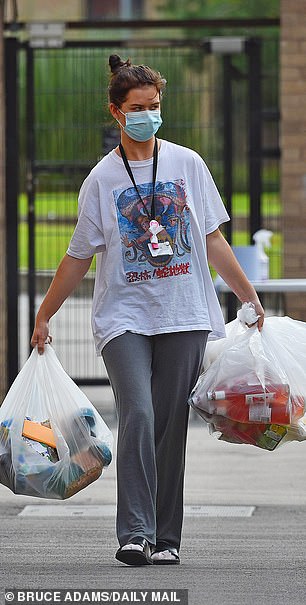 Students at universities hit by coronavirus should seek tuition fee refunds if the quality of their course slips, the higher education watchdog said last night. They have complained of ‘disgusting’ conditions as they are essentially sealed off from the outside world.

‘Where they feel this is not happening they can raise concerns with their university, escalating complaints to the Office of the Independent Adjudicator where a resolution cannot be found.

‘They can also inform the OfS, and we can and will investigate if we believe that universities have not taken all reasonable steps to protect standards or where quality is slipping for groups of students.’

She added: ‘In considering whether to make partial tuition fee refunds, we would expect a university to consider the circumstances for each student rather than to adopt a blanket policy that refunds are not available.’

Schools should be the last places to close in any future lockdowns, say children’s watchdog

Schools should be the last places to be closed in any future lockdowns, the children’s watchdog said yesterday.

It was wrong to allow pubs and stores such as pet shops to open early in the summer while children were kept at home, Children’s Commissioner Anne Longfield, pictured, said. She called on ministers to see that ‘schools are the last to close and first to reopen if there are further lockdowns’.

The pressure from Miss Longfield, the Government’s observer of how children are being treated, comes amid widening concern over the prospect that millions of children will again be deprived of education if infections continue to rise and lockdowns are reimposed.

It follows research indicating that children are 40 per cent less likely than adults to contract Covid-19.

Professor Russell Viner, of University College London, said: ‘The key thing about this research is that it supports keeping schools open.

‘Schools need to be open and be almost the last places to close. As part of learning to live with this virus, we need to be keeping schools open.’

Mrs Dandridge insisted universities must be clear about how to access food and virus tests during outbreaks.

Ahead of the academic year, students were promised a ‘high-quality, full and exciting university experience’ but scenes of chaos have emerged on some campuses.

National Union of Students president Larissa Kennedy blasted the ‘disgusting conditions’ some students are living in and questioned the legality of their confinement.

She told ITV’s Good Morning Britain certain students were short of food and asked ‘whether it has been legal to keep them cooped up in that way without that access to the things that they need’.

Manchester Metropolitan University (MMU), where 1,700 students are isolating, yesterday said they would be refunded more than a week’s rent and provided a ‘basic food’ package.

Many students complained they felt like they were in a ‘prison camp’ with guards preventing them from leaving and officials ordering them to take down ‘SOS’-style posters hung in windows.

One said: ‘I’m a bit worried that I paid £6,000 when I could have just done it online, lived at home and then moved in in my second year.’

University vice-chancellor Professor Malcolm Press said a ‘significant amount of money’ would be handed back, on top of food, to ensure students felt ‘protected and cared for’. Glasgow University has also offered isolating students a refund of one month’s rent, along with a £50 payment for food following an outbreak there.

The refunds could open the floodgates for claims at universities across the UK. Universities UK, which represents institutions, said blanket refunds were ‘unaffordable’ because of the amount spent preparing for the academic year during the pandemic.

‘In this very difficult year, universities are aiming to provide a high-quality and engaging educational experience for their students, while prioritising their physical and mental wellbeing.’

Some opposition MPs backed calls by the lecturers’ union, the UCU, demanding all universities switch to online teaching.

Over the summer, universities were fearful of financial chaos if students stayed away and in June promised them ‘significant in-person teaching and a wide range of social activities’. 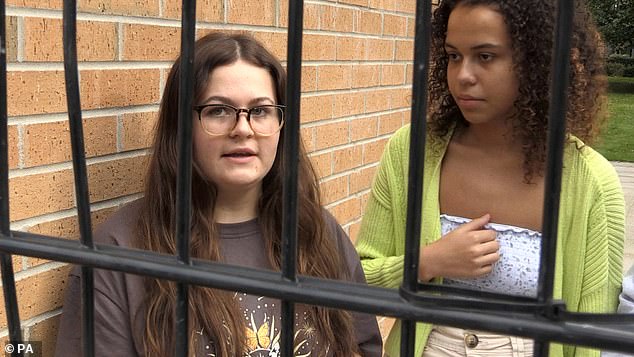 Ahead of the academic year, students were promised a ‘high-quality, full and exciting university experience’ but scenes of chaos have emerged on some campuses. Pictured: Two students locked down at a halls of residence in Manchester

But UCU leader Dr Jo Grady said encouraging students to move into halls despite the danger looked ‘like a cynical effort to extract accommodation fees and then worry about what to do’.

She added: ‘We believe a summer spent selling a university experience to prospective students that couldn’t be delivered would have been better spent following the science and preparing properly for this inevitable crisis.’

Labour MP Siobhain McDonagh said students looked like they were being used as ‘cash cows’, adding: ‘Surely these problems could have been anticipated before term started?’

She told the BBC: ‘Students like to have fun, like to go out in freshers’ week – that’s not news to anyone is it?’

Downing Street said it expected students would be allowed to return home for Christmas after Scotland also softened its guidance after an outcry north of the border.

Meanwhile, Exeter University is asking students who live in the city not to meet indoors with anyone who is not part of their household.

It said there had been a ‘continued rise’ in student Covid-19 cases. The university said the move does not mean students ‘cannot go out’ and listed a number of exceptions, including study, work or in an emergency situation where people are in danger. 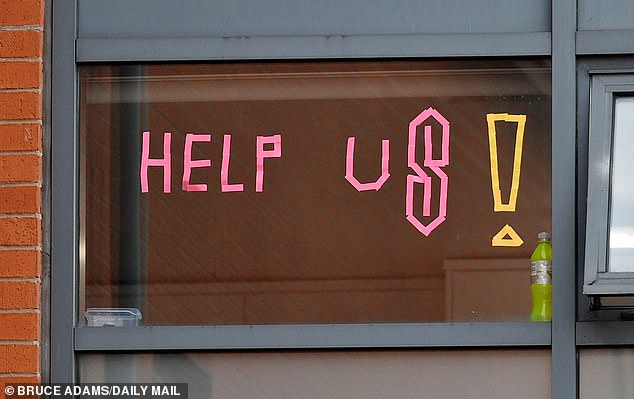 Over the summer, universities were fearful of financial chaos if students stayed away and in June promised them ‘significant in-person teaching and a wide range of social activities’. Pictured: A student puts a ‘Help Us’ made out of sticky notes on their window

Last night universities minister Michelle Donelan warned institutions they ‘must give as much clarity to students as possible on the tuition they will be receiving and should ensure that guidance on Covid-19 testing and welfare and emergency resources is readily available’.

Meanwhile, lawyers are looking into securing damages for false imprisonment on behalf of nine students who claim that they were placed under an illegal lockdown.

It came after Manchester City Council instructed the 1,700 MMU students to self-isolate – with some describing how security guards refused to let them leave the campus.

Over the weekend, human rights lawyers suggested the students had a case for claiming false imprisonment, as a change in the law enabling self-isolation to be enforced did not take effect until yesterday.

Merseyside-based Levins Solicitors confirmed that it was taking action on behalf of students ‘trapped’ in halls.

The firm’s Jon Heath said it was a ‘really important principle’.

Would This Hypothetical E3 Nintendo Direct Have Satisfied You?