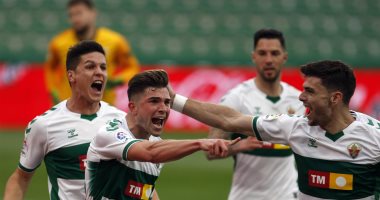 Elche tasted his first victory in La Liga this season, by defeating Getafe outside its bases, with a 1-0 win, in the match that brought them together today, Monday, at the Coliseum Alfonso Perez, at the end of the fourth round of the Spanish Football First Division.

Elche owes this precious victory to their veteran striker Lucas Perez, who scored the three-point goal in the 69th minute.

With his first victory in the season, Elche raises his score to 5 points from two draws and a loss, in addition to today’s victory, to jump to ninth place temporarily.

As for the Madridista team, it did not achieve any victory this season, and received its fourth loss in a row, to sit in the 19th and penultimate place without points.

On the other hand, Real Madrid swept its guest Celta Vigo 5-2, in the exciting match that brought the two teams together on Sunday evening, at the “Santiago Bernabeu”, where the royal team returns to play after an absence of 560 days, due to comprehensive renewals, within the competitions of the round. The fourth of the Spanish League “La Liga”.

Everton increases Burnley’s pain with a 3/1 victory in the English Premier League.. Video