Rumble between the jumbos: Bull elephants slug it out in 30-minute brawl during breeding season in a South African game reserve

This is the amazing footage of a pair of bull elephants rutting other on a road through a South African game reserve, blocking traffic for more than 30 minutes.

The two huge elephants pushed and shoved each other across the road in the Pilanesberg National Park, north-west of Johannesburg, in South Africa.

Author and spirit coach Belinda Joubert, 56, was among a group of people who witnessed the unusual display which lasted between 30 and 40 minutes. 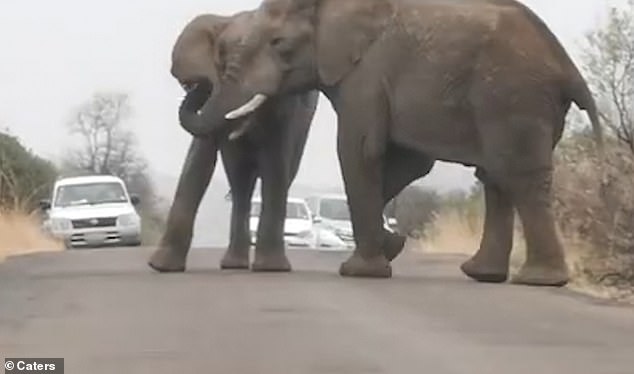 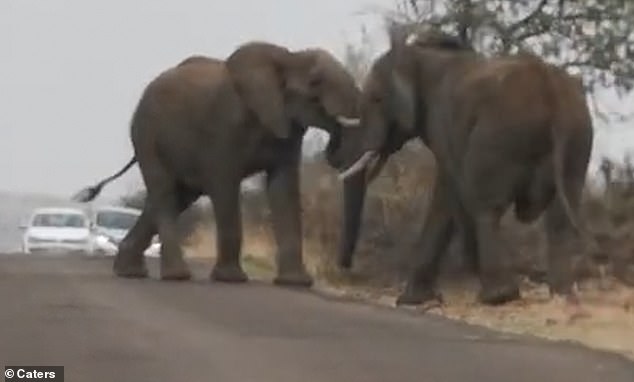 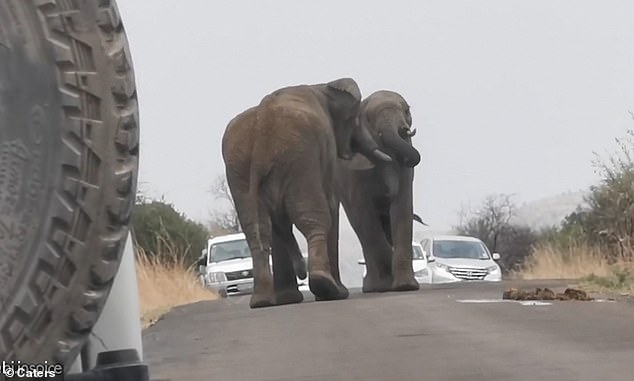 Bull elephants are known to become more aggressive when they are in musth, a period when their bodies are flooded by hormones

Ms Joubert said: ‘I was very excited and not scared at all, as long as we kept our distance, we were fine.’

The footage shows the two elephants pushing each other trying to make the other back down.

The two elephants ignored the cars parked either side of them while they continued their quest for dominance.

Bull elephants are known to become more aggressive when they are in musth, a period when their bodies are flooded by hormones.

The release of large amounts of temporin from the temporal glands inside the elephant’s head changes the animal’s behaviour.

This also prompts the release of large amounts of reproductive hormones into the elephant’s system, it makes the animals oversensitive to sounds and movement.

Musth – which comes from the Persian for ‘Drunk’ – is normal in healthy elephants.

According to experts, bull elephants during breeding season ‘show heightened aggression and unpredictability’.

The popular Pilanesberg National Park surrounds a volcanic crater just south of the Botswana border. It is the fourth largest wildlife park in South Africa. The crater was formed 1,300 million years ago.

It is home to the Big Five safari animals, lions, leopards, rhinos, elephants and Cape buffalo.