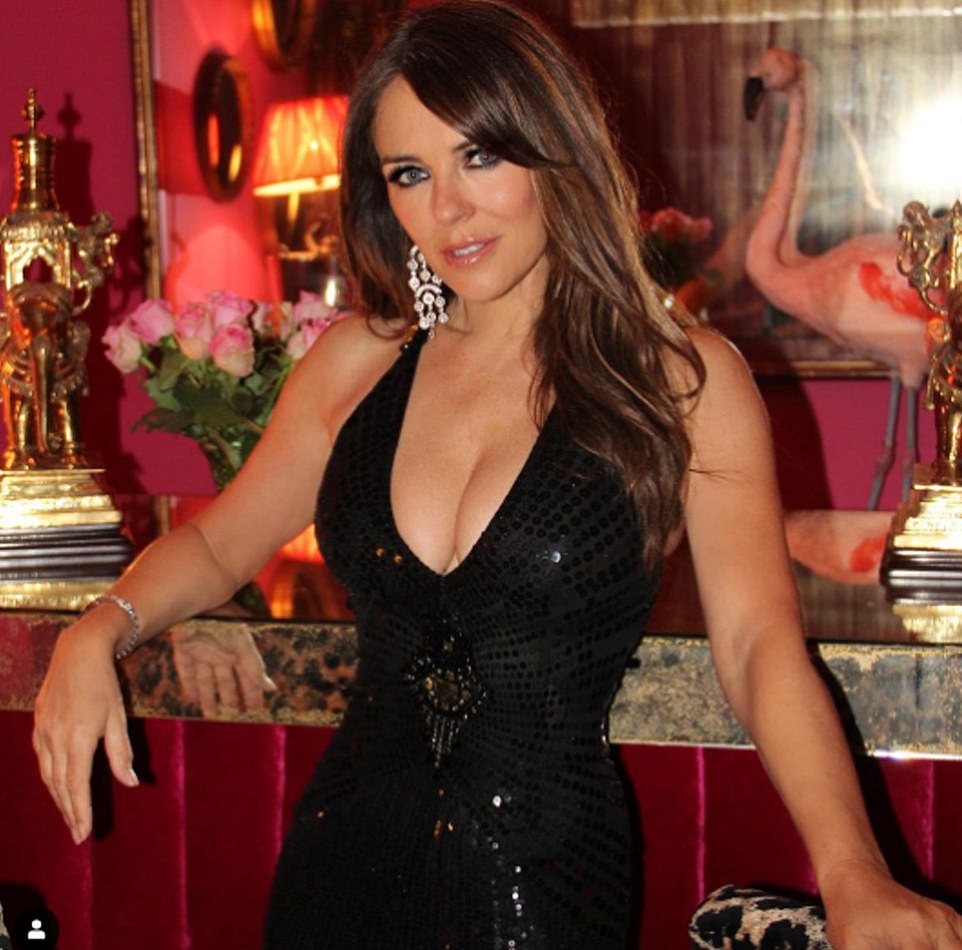 
Day in, day out, we endure the Covid briefings as Boris and Co grimly tell us to stay home and stay safe.

Just 120 miles away, in her £6million country estate in Herefordshire, actress Elizabeth Hurley, 55, has spent the past ten months proving a pandemic is no reason not to stay perky and positive.

LADY OF THE MANOR, March 13, 2020: With lockdown No1 looming, Liz retreated to her Grade II-listed country manor. ‘Why go out when you can stay in?’ she asked. ‘Why buy new dresses when you can squeeze into one you’ve had for 15 years?’ she added. Safety conscious, frugal and still fitting in old dresses… Liz is an example to us all

THANK YOU AND GOOD NIGHTIE… March 28: Liz wanted to add her voice to the national outpouring of thanks to the NHS … not by sticking a rainbow drawing in the window, or banging a saucepan with a wooden spoon on her front doorstep like everyone else, but by posing in her bathroom in a lacy babydoll nightie. Far more eye-catching

DRESSED TO THRILLER April 8: What better way to keep boredom at bay than to dip into the dressing-up box and star in your own murder mystery? Turban, fur stole, diamond earrings and fake eyelashes — but what’s the thriller? Dial Double-D For Murder, perhaps?

HEAVENLY AND EARTH April 22: Despite the virus, Liz found time to support good causes such as Earth Day, where people are encouraged to focus on environmental issues. ‘Habitat destruction and the illegal wildlife trade have contributed to deadly pandemics,’ she told her 1.8million Facebook followers…while lying half-naked in the long grass

TURNING UP THE HEAT April 24: With Britain enjoying a heatwave and most of us despairing of our spare tyres due to all that lockdown banana bread, Liz was star-jumping in hotpants and a tiny bikini top (from her own range). With a flat stomach and the body of someone half her age, ‘#stayhome’ was the inspirational message

SHE’S A STAR OF SMALL SCREEN May 18: In lockdown, we watched more TV than ever before, but lounging on a DFS sofa in elasticated trousers was not for Miss Hurley. Instead, she caught up on her box sets while wearing a 21-year-old Versace cocktail dress, showing us all how to slob out in style

A LITTLE WAHEY OF SUNSHINE May 21: With some experts suggesting that Vitamin D can help ward off the virus, Liz did her bit to get the message out there loud and clear. Frolicking in the glorious spring sunshine — and working from home like so many others — she gave a topless plug to Clinique, part of the Estee Lauder brand with whom she has a £2million contract

SHE’S LIFE AND SOAP OF PARTY June 10: ‘Happy birthday to me,’ said Liz, as she marked her 55th with bubbles. Embracing the social media trend for bathtub selfies, she uploaded a picture of herself enjoying a soak. But beneath the frivolity was a serious message: ‘Grateful to be happy & healthy. Here’s hoping real life starts again one day’

A CASE OF BLOOM AND BUST June 22: In dark times, some of us may forget to stop and appreciate the glorious beauty of the English countryside — but not Elizabeth. ‘Fourteen weeks at home and England is blooming’ she said, while posing in a cosy cardie with no bra underneath (attracting some 190,000 likes). Chris Packham, take note

SULTRY SNUB TO THE PUB July 8: Drinkers flocked to newly reopened pubs — but sensible souls such as Liz held back. ‘Bars may be open but I’m staying home…#safer #nicer,’ she said in a public-spirited message, looking sultry in a red dress. You don’t get that down the Kings Arms

PLAYING HER CARDIE RIGHT? August 23: Life is starting to get back to normal and Liz is back at work. She marks her return to filming by uploading a pic in her vest, knickers and trusty cardie. She’s making a movie called Father Christmas Is Back in which she stars as one of four sisters who celebrate Xmas in a huge country mansion in a succession of revealing outfits. A stretch, maybe, but we’re sure she’ll pull it off

STRICTLY COME DAZZLING December 19: While the audience was spilling over with excitement at the final of Strictly Come Dancing, Elizabeth was spilling out of her dress as she put in an unexpected cameo appearance, reading out the voting rules. Dads up and down the land sat bolt upright as our favourite actress brought some added sparkle to the ballroom (and the BBC tech staff scrabbled to cover her modesty with some rolling credits)

BIG NIGHT OUT FOR THESE TWO December 31: Elizabeth marked the end of a very trying year in the company of her handsome 18-year-old son Damian. Wearing a New Year’s Eve plunging party frock by DSquared2, she saw out 2020 with typical Hurley razzle-dazzle

BRINGING SOME SEX AP-PEEL? January 18, 2021: Back in a third lockdown and Liz is not resting on her laurels. While others feel slovenly and lack motivation, she is churning out jars of marmalade. ‘Lockdown has turned me into a demented housewife,’ she joked while showing off her wares. A new string to her business bow, perhaps? She certainly knows how to set out her stall

SOFA, LIZ’S STILL GOING STRONG January 20: You’d hope by now that people have got the message to stay at home. But, for those still struggling, Liz is here to show us how it’s done: lounging on a velvet sofa in a pink Versace cocktail dress with her legs in the air. ‘Still at home! #makingthemostofit #stayhomestaysafe.’ Positively motivational. Thank you, Liz