By Glen Keogh and Brian Deer For The Daily Mail

Elle Macpherson has dubbed the pandemic a ‘divine time’ to promote the campaign against vaccinations – backing her disgraced former doctor boyfriend.

The Australian model was speaking last month with Andrew Wakefield, whose discredited research linking the MMR jab and autism made him a pariah.

In video footage obtained by the Mail, she is introduced by Wakefield as ‘Elle Macpherson, my girlfriend’ ahead of a US screening of his most recent instalment of anti-vaccination propaganda.

Talking to him before an audience in North Carolina, she says: ‘You made this film during Covid, and it’s interesting because it’s such beautiful, sacred timing when you watch the film, because it’s so pertinent and so relevant… And for it to come in this divine time where vaccination and mandatory vaccination is on everybody’s lips.’

This was the first time the model-turned-entrepreneur has acknowledged their relationship in public and endorsed her partner’s activism.

Miss Macpherson, 56, said she was ‘honoured’ to be sharing the stage with Wakefield, 64, saying she first heard about ‘Andy’ in 1998 – the year his now-notorious sham research falsely claimed to have discovered evidence in 12 children that the MMR vaccine caused autism.

Wakefield, originally from Berkshire, was struck off the medical register in 2010 after his research showing the supposed link between the MMR jabs and autism was exposed as an ‘elaborate fraud’.

His false claims led to a downturn in vaccination among children and renewed measles outbreaks.

He moved to the US and reinvented himself as a filmmaker and campaigner, and in recent months has seized on paranoia owing to the coronavirus pandemic to spread conspiracy theories around vaccination.

Wakefield has dismissed the coronavirus as what he calls ‘WuFlu’, after the city of Wuhan in China, where the pandemic began.

At an online ‘Health Freedom Summit’ he said the death toll had been ‘greatly exaggerated’ and the effects of the pandemic were ‘based upon a fallacy’.

Dr Tony O’Sullivan, a retired consultant paediatrician, last night said the spread of anti-vaccination ‘lies’ during the coronavirus pandemic would guarantee ‘the deaths of millions more’.

‘The anti-vaccination movement has never been more dangerous and pernicious than at this time of the pandemic,’ he said.

‘It is based on ignorance and selfishness. It is peddling lies about the safety of vaccinations and the purposes of them. Vaccinations are a hugely important public measure to keep people safe.’

On Miss Macpherson’s appearance alongside Wakefield, he added: ‘I think people are entering dangerous waters when they have scant knowledge about vaccinations against science and dedicated scientists.’ 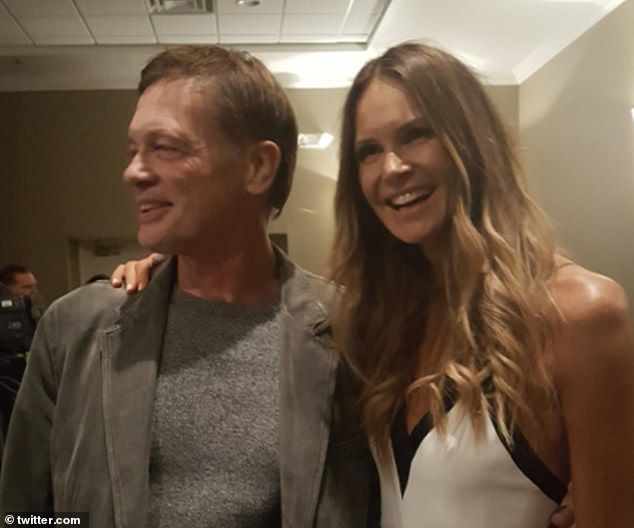 Campaign: Former doctor Andrew Wakefield and Miss Macpherson. Wakefield has dismissed the coronavirus as what he calls ‘WuFlu’, after the city of Wuhan in China, where the pandemic began

Wakefield and Miss Macpherson were first linked in 2018 when pictures emerged of them sharing a kiss at a Miami street market, shortly after Wakefield split from his wife of 30 years, who had stood by him throughout the MMR scandal.

Despite being ostracised by the medical community in Britain, Wakefield has become something of a minor celebrity in the States.

At a screening of his partly-dramatised film claiming a 1986 US Act which introduced a no-fault compensation scheme for possible cases of vaccine damage was an evil conspiracy, he suggested popstar Justin Timberlake had backed the film when they met at a fundraiser in Los Angeles in May.

A spokesman for Miss Macpherson was contacted for comment.

Brian Deer’s new book is The Doctor Who Fooled the World: Andrew Wakefield’s War on Vaccines.