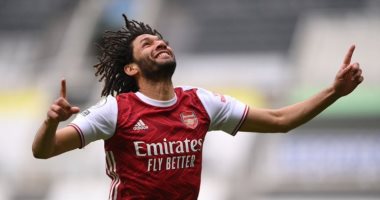 Egyptian international Mohamed Elneny, Arsenal midfielder, confirmed that the English Premier League matches without the presence of fans, such as friendly meetings, lose a lot of fun due to the lack of passion of these fans for their teams.

Elneny’s speech came during an interview with Arsenal’s official website, saying: “For me, I think that all players are the same. The first thing we thought about was everyone’s safety, so we understood, of course, the reasons for the lack of fans during the epidemic.”

Al-Nini added, about the absence of the fans during the epidemic: “This was the right decision, we want everyone to be safe, so of course we all accepted it, and we knew that it was correct and it should be in this way.”

Mohamed Elneny continued: “Football matches without fans are like friendly matches, personally I don’t like it, it’s not the same, I think everyone would say that, even by watching it on TV, you don’t enjoy it the same way, the fans are a really important part of the game, and when they’re not there, it’s different It’s the same, but it’s not the same, and it’s not right.”.

Mohamed Elneny explained: “We spent a long time without fans now, and I really miss them, for me as a player, even the atmosphere in which the opponent’s fans are against you is better than no atmosphere at all, the first thing is safety, but as long as it is safe, you have to have fans, where They make you play better, you play first for the club, but you also play for the fans, they push you, they’ve been at work all week, then when the holiday comes they want to watch and enjoy their team, we want to make them come home happy, that’s our job.”

The Egyptian international continued, saying: “I remember my city was playing against the big local team, Al-Ahly, that was my first match, I think in Mahalla, it is very difficult for any team to go and play there, they are famous for that, because of the fans, the way the fans are so close to the stadium The stadium floor is not easy to play on so all the teams know that and it’s really hard to win there, but I remember being there when I was still very young.”

On playing in Africa, Elneny said: “Sometimes when I play away matches with Egypt, it is not good at all. Often the team we play against will determine the kick-off time and they will choose the hottest time of the day, they make it as difficult as possible for you. The fans do that too, and that’s before you go into the stadium, in fact it’s about five kilometers from the stadium.”

“They line up in the streets, and when they see the bus coming you hear boos and music and machines, you know like they do in Africa, you’re on the bus on your way to the stadium and you really feel like you’re going to have a tough match,” Mohamed Elneny stressed.

And the Arsenal player added: “I have to say we like it, although we like the good weather, but it’s the weather when it’s too hot, you can’t even run, if you play at 8, it’s okay, but the opponent always chooses at 2 pm I swear they look to their phones, and they see what day and what time is the hottest, and that’s the day and time they choose for the game, it’s a fact.”