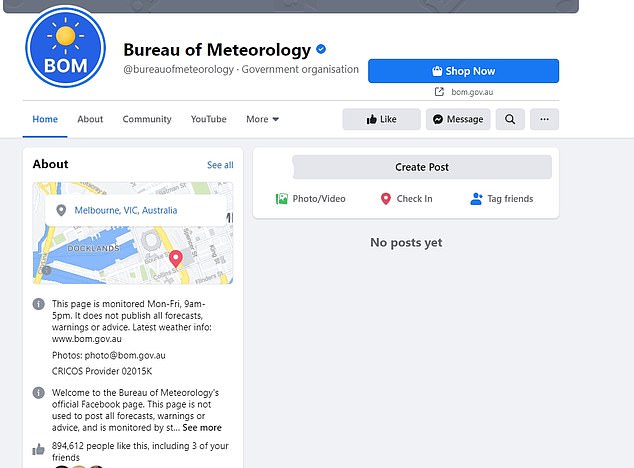 
From the Bureau of Meteorology to Queensland Health and even charities: How Facebook’s news ban endangers lives by cutting you off from vital helplines and information on Covid and bushfires

By Peter Vincent and Charlie Coë For Daily Mail Australia

Vital emergency services have been caught in the crossfire of Facebook’s Australian news ban – cutting off communities from information about Covid-19, bushfires and domestic violence helplines.

Official government pages on the social media platform including the Queensland, South Australia and ACT Health pages and Fire and Rescue NSW have gone down – as have posts from the Bureau of Meteorology.

The Queensland, South Australia and ACT Health pages have all had their posts removed as of Thursday morning

A BoM spokesman said they had contacted Facebook to get their posts reinstated.

‘Our website remains active,’ a spokesman for the health service said.

Vital Australian emergency services have been banned as part of the changes. Facebook from Thursday morning will no longer allow people in Australia to read or share news on its platform, the media giant has said

Westpac Rescue Helicopter CEO Richard Jones said there would be serious consequences if the service couldn’t communicate with its communities on Facebook.

‘I couldn’t comment on the impacts yet but if we were unable to talk to our communities that would be devastating,’ he told Daily Mail Australia.