Emily Ratajkowski has received fierce backlash by social media users after sharing a photo of herself carrying her three-month-old son – as some people suggest she is holding him like an ‘accessory.’

In a series of snaps, the American model can be seen holding her infant son, Sylvester – with the pair wearing matching swimsuits – while on holiday with her husband Sebastian Bear-McClard to celebrate her 30th birthday.

Though Emily turned off Instagram comments, critics flocked to Twitter to slam the way she was holding her baby boy, with users insisting he didn’t have any neck support. 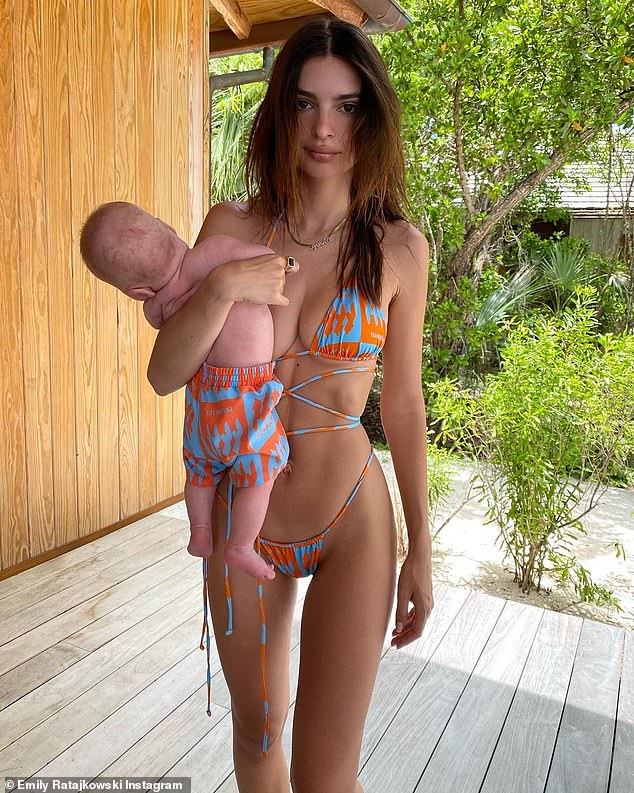 Mom shaming: Emily Ratajkowski, 30, has faced backlash online over the way she is holding her three-month-old son Sylvester in her new vacation photos 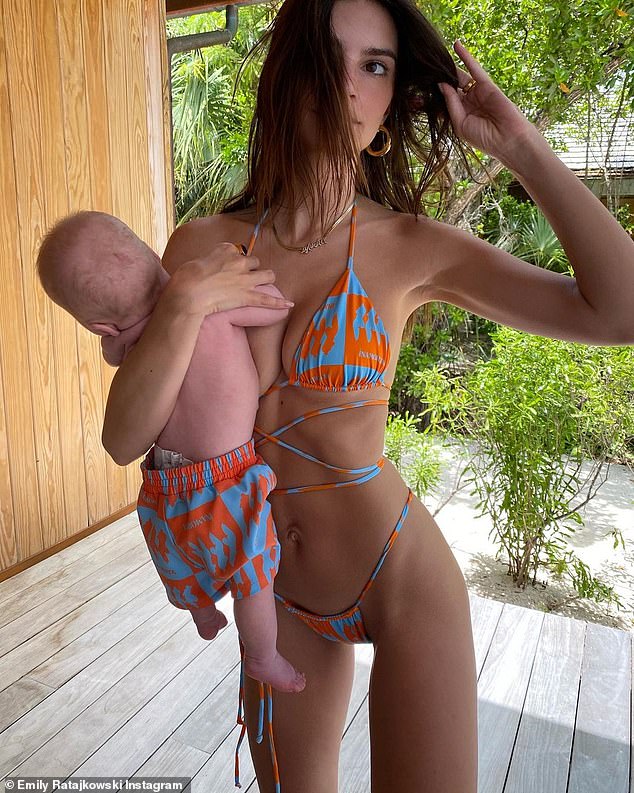 Awkward: In a few of the snapshots, she is holding Sylvester to her chest with one arm while showing off her bikini. The infant’s head is lobbed to the side and his feet are dangling

The photos show the new mom carrying her son with one arm and holding him on the side of her body to show off her vibrant blue and orange string bikini from her Inamorata line.

Little Sylvester wore a pair of matching swim trunks, possibly signifying that the model has a baby line was in the works.

‘Bday eve with the dream vacation partner,’ she captioned the image.

In a few of the snapshots, she is holding Sylvester to her chest with one arm while posing for the camera. The little boy’s head is lobbed to the side and his feet are dangling. 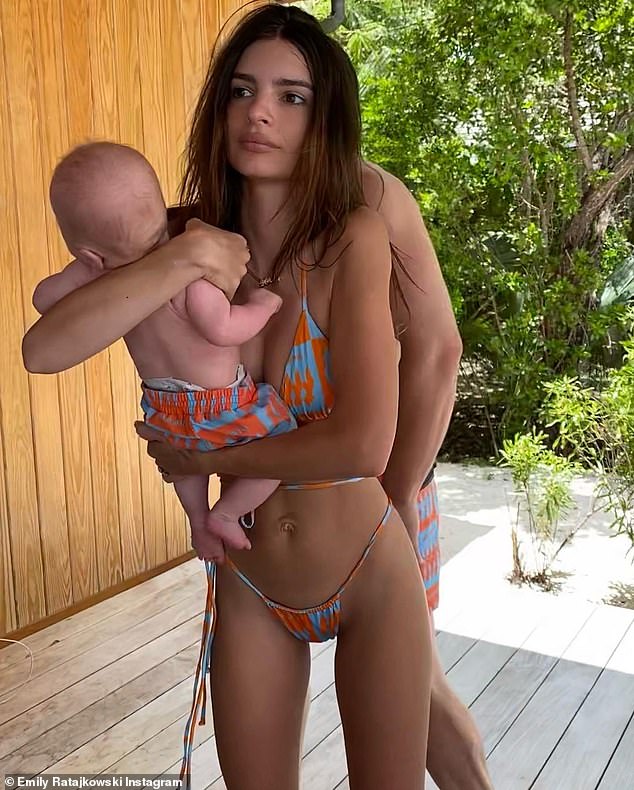 More comfortable position:  Another picture shows the model adjusting Sylvester in her arms 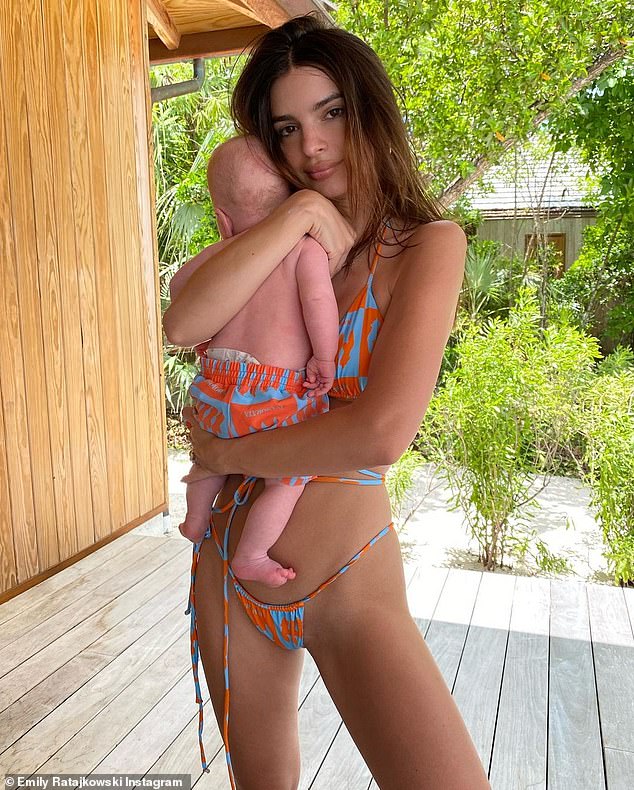 Motherly love: In the final image in the post, she is seen cuddling her baby close with  her are supporting his bottom as he rests on  her chest

Other pictures show her adjusting Sylvester in her arms and cuddling him close.

One Twitter user shared a side-by-side photo of Emily carrying her child next to a snapshot of her carrying a dog, asking: ‘Why does she hold small helpless beings like a textbook?’

‘NO neck support lmfaooo wtf,’ one person wrote, while someone else added ‘And no butt support for the doggy lol.’ 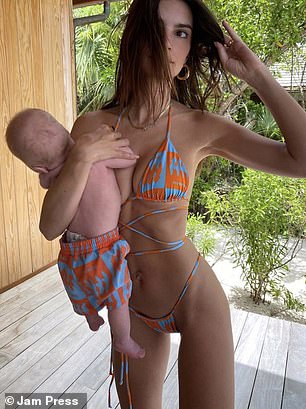 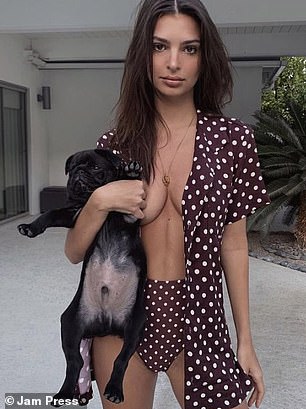 Similar shots: One Twitter user shared a side-by-side photo of Emily carrying her child next to a snapshot of her carrying a dog 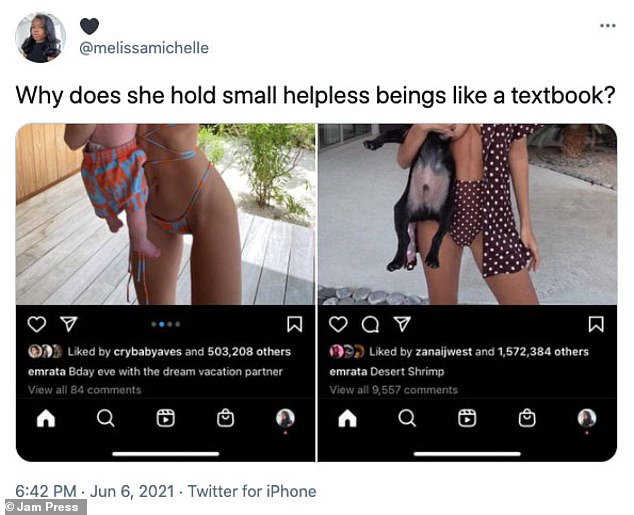 Question: ‘Why does she hold small helpless beings like a textbook?’ the person asked

Backlash: Some Twitter users insisted he didn’t have any neck support, while others claimed she was carrying him like an ‘accessory’

‘How can a mother hold her baby like that wtf,’ another critic asked.

Some users suggested she was holding her baby like an ‘accessory.’

‘She’s holding them like an accessory, glad I’m not the only [one] who thought it was strange…’ someone else agreed.

Meanwhile, some users suggested Emily wanted to flaunt her trim postpartum body in the shot, which led her to holding her baby to the side.

‘Cus its just a prop for her photo and she doesn’t want anything hiding her body…. kinda weird if u think too much into it,’ one person shared. 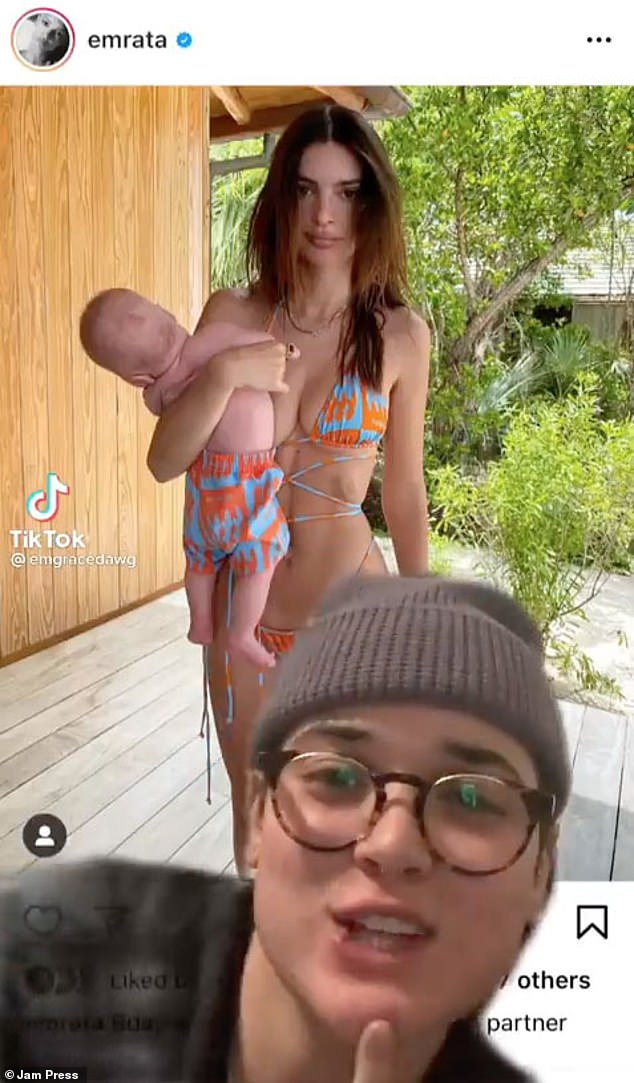 ‘Who cares about the baby? But it’s unacceptable to hold a dog like that,’ someone else commented.

Others, however, were less interested in her baby and more curious about how she achieved such a lean figure just three months after giving birth.

‘Hahaha but I questioning a LOT how she keep in shape during and after pregnancy????!!!’ on Twitter user asked.

‘Super curious how she has a bomb bod after having a baby in a short period of time,’ someone else added.

TikToker user @emgracedawg even went as far as reviewing Emily’s photo, joking of her baby: ‘It’s a cute purse.’

Can you protect your family and the planet? Let your medicine cabinet soothe your conscience

Maduro: 100,000 doses of the Russian “Sputnik V” vaccine will arrive in Venezuela next week