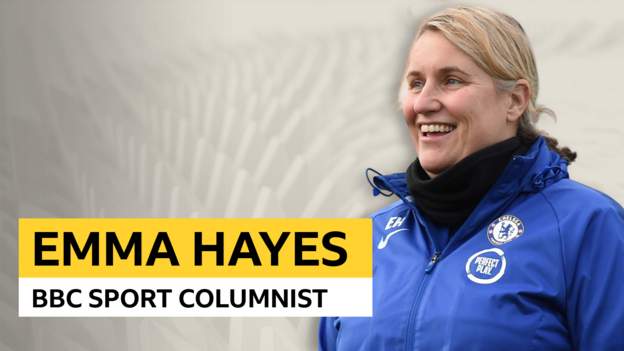 Emma Hayes MBE has been in charge of Chelsea since 2012, following a stint at American club Chicago Red Stars. She was previously assistant manager at Arsenal. With Chelsea, Hayes has won three Women’s Super League titles – including the club’s first in 2015 – as well as two FA Cups and a Spring Series. She is widely regarded as one of the country’s best managers.

It is so easy to be emotional but when you zoom out, the defeat against Brighton – which brought our 33-game unbeaten run to an end – was just a set-back.

I knew the players would recover because we have been trained to recover. It’s important to be calm in defeat and not angry. Of course we were disappointed and upset about it, but what did we do? We went and beat Arsenal and Bristol City.

‘What got us here will not get us there.’ That is the motto inside our building. I don’t stand still. If you think what you did last year bears any relevance on this year, you are fooled. Any player in there that is stuck in the past… goodbye!

If I spend time thinking about last year’s success, we are already beaten. I think about the threats, the new challenges, what we have to do to get to the next step and I will work hard on myself in the off-season.

I bring in the next level of support, the new ideas – just whatever is needed. You have to be motivated and professional. That is what I have learned over my career – you have to perform daily and you can’t switch off because then you are already beaten.

If I see tension or the threat from outside, my intuition and wisdom helps me feel it. I can smell it and the staff know it! I demand even more then. Working for me is not an easy task…

How we formed a winning mentality

It is daily consistency and luck. If you look at what makes luck then it is the persistent pursuit in hard times – if you’re losing in a game, having that ability to stay present and stay focused. You have to train your mind.

The best players and the best teams do everything, every day, all of the time – whether that’s eating right, sleeping right, recovering right or training right. They look at their game and self-reflect hard.

I always hear this question – ‘how do you keep players happy all the time?’ I never understand why people ask that. It makes zero sense. There is no such thing and it doesn’t exist. Every football manager in the world would tell you that.

There are always conflicts and that’s critical. Tensions are important. It keeps you on an edge. If everything is so nice and so comfortable, complacency creeps in and mediocrity appears.

Keeping everybody on their toes and on edge is something that I do intentionally to trigger the conscious brain.

I have always been obsessed with behaviours. If you want a player to be present all the time to perform, you have to make sure that when they are not, you remind them of it. You have to instil the daily practice of it.

At the beginning of every year, I have one-to-one meetings with the players and all of the staff. There will be uncomfortable conversations. When they are forced to be held accountable with other people around, they become more accountable generally.

‘Behave every day like it’s your Champions League final’

If you look up the definition of professionalism there are five factors underpinning it: commitment and altruism, plus ethical, theoretical and emotional intelligence.

I teach the players about what being a professional is. It’s not about having a Louis Vuitton bag! You have to be conscious that every day you are doing something and you might not get what you want from it. But you also have to remember it is your job and you are getting paid for it.

I am a big advocate of making sure you are conscious of those around you. That could just be saying ‘hello’ to people on a regular basis as that shows you are aware.

My job is to win so I can’t go around every day making people happy. And I don’t! I know I fail at that.

Ultimately, you are playing for something bigger than yourself. It doesn’t matter if we agree or disagree on certain things. We have a common goal and that is winning.

If you are going to win the biggest prizes, you win in your mind, then you make sure when the difficult moment happens, you are at the front of the line and not at the back.

You have to behave every day like it’s your Champions League final. If you do that, you have a good chance of going far in any competition.

Emma Hayes was speaking to BBC Sport’s Emma Sanders. You can read her column on the BBC Sport website and app every month.