Shortly after Juno and Umbrella Academy star Elliot Page publicly came out as transgender, his spouse of nearly three years, Emma Portner, made a plea for ‘patience & privacy’ — and now she’s taken the matter of privacy into her own hands by deleting her Instagram account.

Immediately after 33-year-old Elliot’s announcement, Emma, 26, shared public support, writing of being ‘so proud’ and asking for ‘fervent support of trans life every single day.’

But the public discourse over Elliot’s transition may have grown too overwhelming for Emma, who has since deleted her public Instagram page. 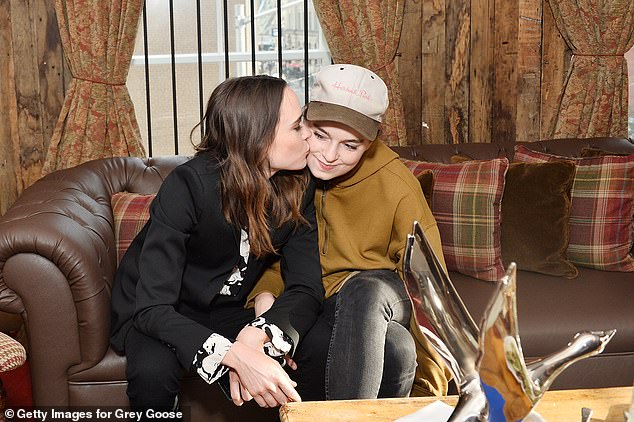 In control: The 26-year-old had previously made pleas for privacy and has now taken matters into her own hands

Deleted: It’s unclear if she is off Instagram altogether or changed her username and set to private

It’s unclear when, exactly, Emma’s page disappeared, though Elliot is still active and posting on the platform.

As recently as Sunday, the star posted a selfie, in which he was seen wearing glasses and a black hoodie pulled over his head.

‘From the bottom of my heart, thank you,’ the actor wrote to followers. ‘Your love and support has been the greatest gift. Stay safe. Be there for each other.

‘If you are able, support @transanta and @translifeline. See you in 2021. Xoxo Elliot.’ 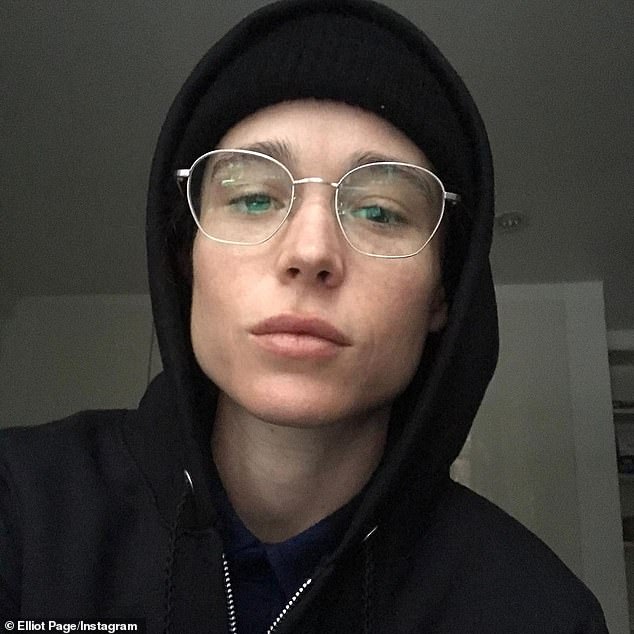 Still active: On Sunday, Elliot, 33, shared a selfie on Instagram and thanked followers for their support

He wrote: ‘Your love and support has been the greatest gift. Stay safe. Be there for each other. If you are able, support @transanta and @translifeline. See you in 2021’

But Elliot — and possibly Emma, by extension — has also had to contend with some cruel, hateful comments from transphobic social media users.

It’s possible that the ugliness became too much for Emma before she decided to take a step back from social media.

DailyMail.com has reached out to a spokesperson for the couple for comment.

In the days immediately following Elliot’s announcement, Emma was vocal in her support of his transition.

‘I am so proud of @elliotpage,’ the dancer first wrote on Instagram. ‘Trans, queer and non-binary people are a gift to this world.

‘I also ask for patience & privacy [and] that you join me in the fervent support of trans life every single day. Elliot’s existence is a gift in and of itself. Shine on sweet E. Love you so much.’

Evolution in public: Elliot publicly came out as gay in 2014, and  in 2018 he and Emma married

Emotional: Emma took to Instagram shortly after the actor shared his statement to offer public words of support, writing, ‘Shine on sweet E. Love you so much’ 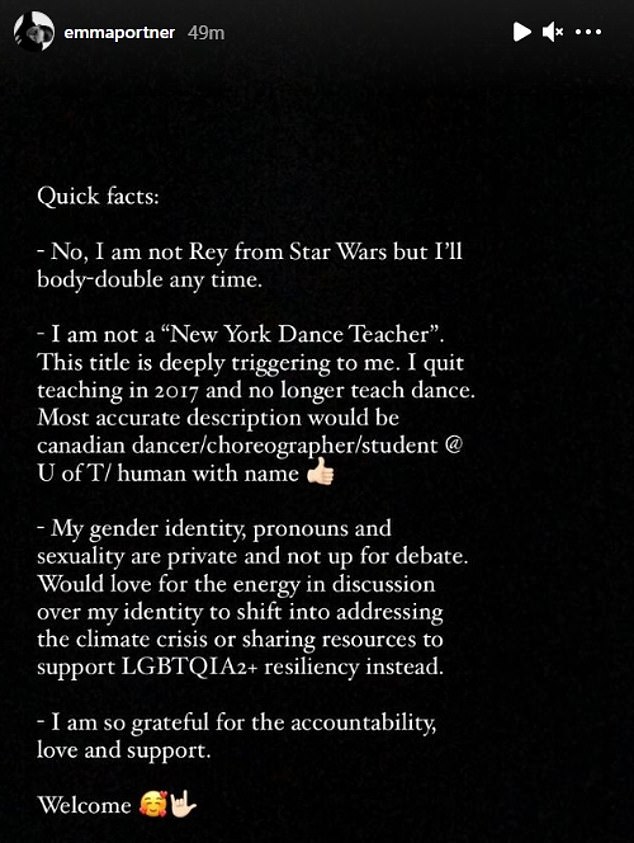 Later, she wrote on Instagram:  ‘My gender identity, pronouns, and sexuality are private and not up for debate’

A couple of days later, though, Emma returned to Instagram Stories to address queries about her own gender identity and sexuality.

Emma cleared up a few misconceptions and questions in a now-expired story, clarifying that she is ‘not Rey from Star Wars’ — the character played by Daisy Ridley — and identifies as a Canadian dancer, choreographer, and student at U of T.

But most importantly, with so much of the conversation swirling around Elliot’s sexuality and gender identity, Emma wanted to remind people that it was just Elliot who shared those personal details.

‘My gender identity, pronouns, and sexuality are private and not up for debate,’ Emma wrote. ‘Would love for the energy in discussion over my identity to shift into addressing the climate crisis or sharing resources to support LGBTQIA2+ resiliency instead.

‘I am so grateful for the accountability, love, and support,’ she added. 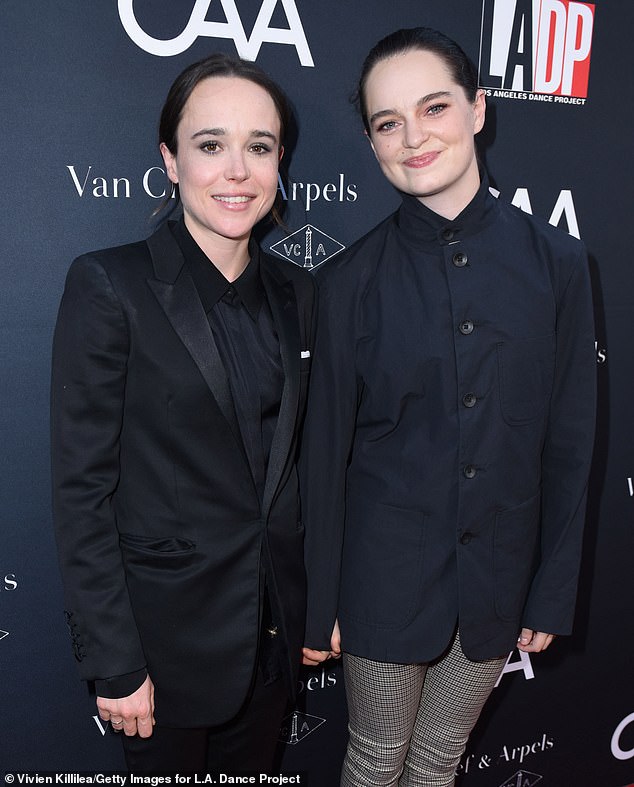 Wed: Emma and Elliot secretly married in January of 2018 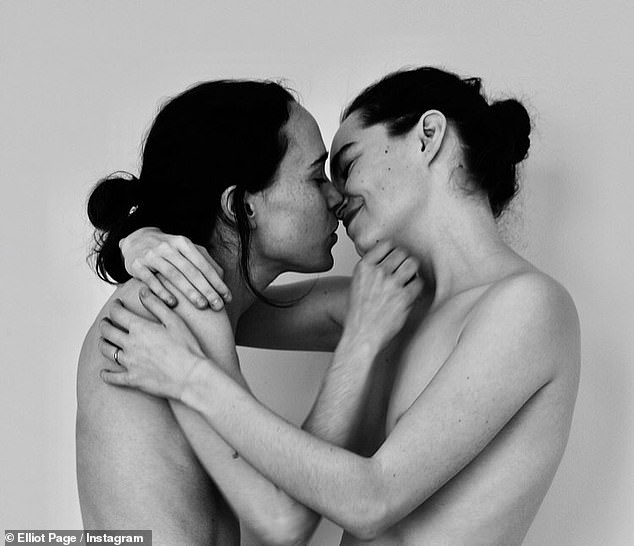 Elliot’s announcement made international headlines earlier this month when he broke the news with a candid letter on Instagram and Twitter.

‘Hi friends, I want to share with you that I am trans, my pronouns are he/they and my name is Elliot,’ the star wrote.

‘I feel lucky to be writing this. To have arrived at this place in my life.’

Elliot, who received an Oscar nod for their role in the hit 2008 movie Juno, went on: ‘I feel overwhelming gratitude for the incredible people who have supported me along this journey.

‘I can’t begin to express how remarkable it feels to finally love who I am enough to pursue my authentic self. I’ve been endlessly inspired by so many in the trans community. Thank you for your courage, your generosity, and ceaselessly working to make this world a more inclusive and compassionate place.

‘My joy is real, but it is also fragile,’ the actor said. ‘The truth is, despite feeling profoundly happy right now and knowing how much privilege I carry, I am also scared of the invasiveness, the hate, the “jokes,” and of the violence.

Coming out: Elliot took to Twitter on December 1 to publicly share the news that he is transgender

Changes: Elliot also updated his social media accounts, changing his usernames, and adding a new profile picture (above) to his Twitter and Instagram

He went on to address the ‘staggering’ statistics of discrimination toward trans people which are ‘insidious and cruel’ and result in ‘horrific consequences’ — nothing that in 2020 alone, it’s been reported that 40 trans people have been murdered.

‘To the political leaders who work to criminalize trans health care and deny our right to exist and to all of those with a massive platform who continue to spew hostility towards the trans community: you have blood on your hands,’ he wrote.

‘You unleash a fury of vile and demeaning rage that lands on the shoulders of the trans community, a community in which 40% of trans adults report attempting suicide. Enough is enough. You aren’t being “cancelled,” you are hurting people. I am one of those people and we won’t be silent in the face of your attacks.

‘To all trans people who deal with harassment, self-loathing, abuse and the threat of violence every day: I see you, I love you and I will do everything to change this world for the better.’ 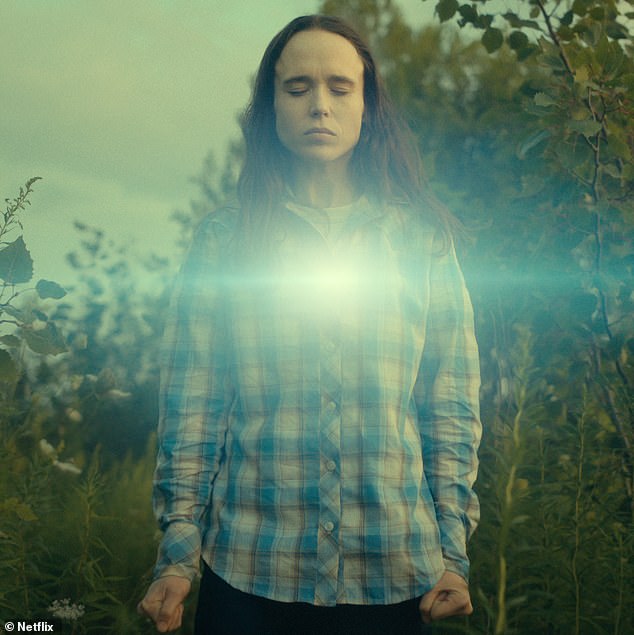 Looking ahead: The actor is preparing to begin filming for the third season of Netflix hit The Umbrella Academy, and insiders have revealed he will continue to play female violinist Vanya

Breakthrough: Elliot first found fame for starring as a pregnant teenager in the hit 2007 movie Juno, for which he earned an Oscar nomination

Although Elliot did not detail how or when he came out to his family, he thanked his loved ones for their support through his journey, expressing his ‘overwhelming gratitude’ for helping him to reach a stage where he felt comfortable to ‘pursue his authentic self.’

Elliot’s decision to publicly reveal he is transgender came almost three years after he and Emma tied the knot in a secret ceremony, having only been dating publicly for six months. Elliot publicly came out as gay in 2014.

The actor is currently due to begin filming the third season of Netflix hit The Umbrella Academy in February. He plays the role of Vanya Hargreeves, a cisgender woman with the ability to harness sound and convert it into energy.

Sources told Variety that Elliot will continue to play the role of Vanya Hargreeves following his coming out and ‘there are no plans to change the character’s gender.’

In the wake of Elliot Page’s announcement this week, Martin, a 17-year-old trans and queer creator from Canada, took to Twitter to list the things cisgender people should avoid saying and doing when talking to or about someone who is trans or non-binary.

‘So in light of Elliot Page coming out, I’m gonna remind you guys of basic, Very Basic trans etiquette in this thread,’ he wrote.

‘You don’t use their birth name. Ever. That s**t is dead, you forget that it even existed,’ he said of the practice, which is known as ‘deadnaming.’

He stressed that you should ‘make an effort’ to use the right pronouns and correct others when they say the wrong ones. 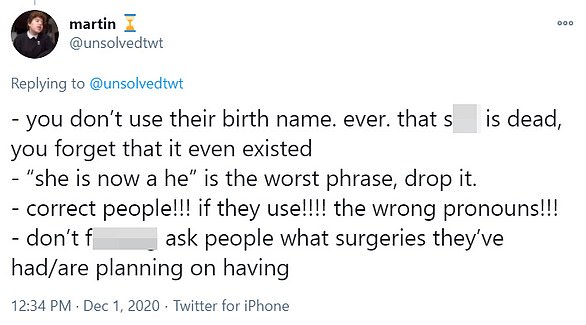 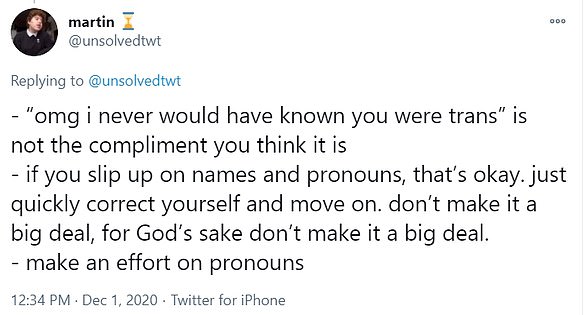 With that being said, he explained that ‘you don’t get a special prize for using the right name and pronouns.’

‘It’s basic respect,’ he pointed out. ‘Don’t act like you’re doing them a favor.’

Martin went on to list some offensive things that people commonly say to transgender or non-binary people.

Martin also noted that cisgender people should never ask a trans person what surgeries they have had or are planning to have.

‘Everyone transitions in their own way and at their own pace. You don’t get to police that,’ he tweeted. ‘Don’t ask them if their label on their sexuality has changed. They’ll talk about that in their own time. Just be f**king respectful, people, it’s not hard.’

Martin told DailyMail.com via Instagram direct message that he was inspired to make the post after Elliot publicly came out as transgender. 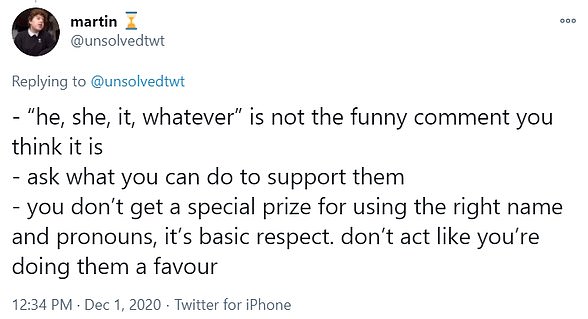 ‘I knew there would be responses to Elliot’s coming out that would be unintentionally offensive, such as using his birth name or asking intrusive questions that really weren’t anyone’s business, so I felt it was important to just compile a list of some basic things that new cis allies should know about,’ he said.

The first tweet in Martin’s viral thread has been shared more than 75,000 times and has received 214,000 likes.

‘The responses have been really varied, though for the most part it’s attracted people who are just genuinely trying to learn about the do’s and don’ts when referring to a trans person,’ he said.

‘I spent a lot of yesterday just answering questions the best that I could, as the whole point of the thread was to help educate. There were also unfortunately a lot of transphobes in the replies, however. I was replying to them at first, but then just realized if I couldn’t educate them to be better then they weren’t worth my time.’

‘It seems like the education is still going on in the replies, which I find great,’ he said.

The teen noted that if there is one take away from his post, it’s that you should ‘treat trans people like people.’

‘We’re just people,’ he added. ‘There’s no need for 20 questions and a million uncomfortable conversations after we come out. I’m just hoping that the things I listed in the thread are common knowledge one day so that we don’t have to keep reminding people of those things.’

Me and White Supremacy: Combat Racism, Change the World, and Become a Good Ancestor

Me and White Supremacy: Combat Racism, Change the World, and Become a Good Ancestor