Family and friends of murdered mother Hannah Clarke gathered on Friday to mark the one year anniversary of the tragedy.

Lloyd and Sue Clarke were among many mourners to light candles and lay down flowers in their daughter’s and grandchildren’s memory at a nearby park in Brisbane’s east, where a section has been named ‘Hannah’s Place’.

On February 19, 2020, Hannah Clarke’s estranged husband Rowan Baxter jumped in the car and doused her children – six-year-old Aaliyah, four-year-old Laianah and three-year-old Trey – in petrol and set them alight in Camp Hill in a shocking domestic violence attack.

Following the tragedy, Hannah’s parents Lloyd and Sue Clarke established the Small Steps 4 Hannah Foundation in an attempt to push for law changes and educate senior high schoolers, as well as families about coercive control in relationships. 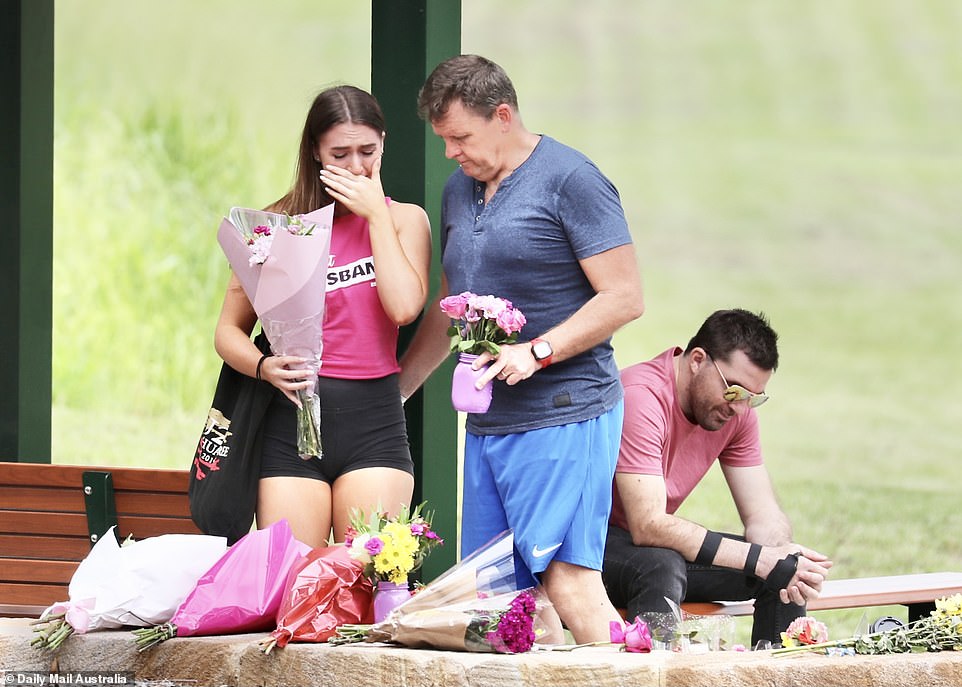 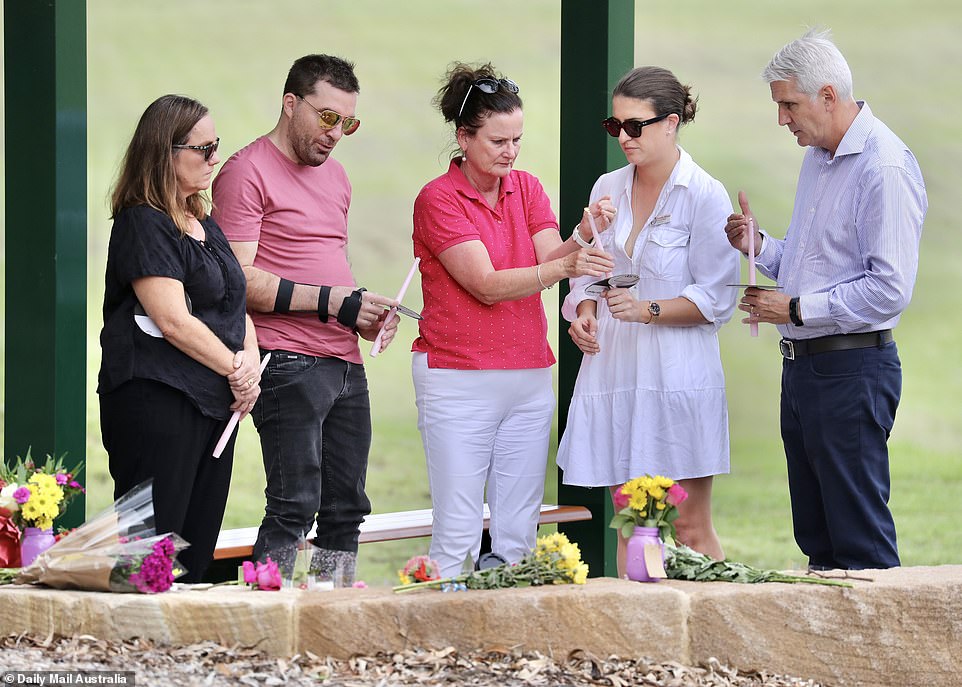 Lloyd and Sue Clarke were among many mourners to light candles and lay down flowers in their daughter’s and grandchildren’s memory at a nearby park in Brisbane’s east, where a section has been named ‘Hannah’s Place.’ 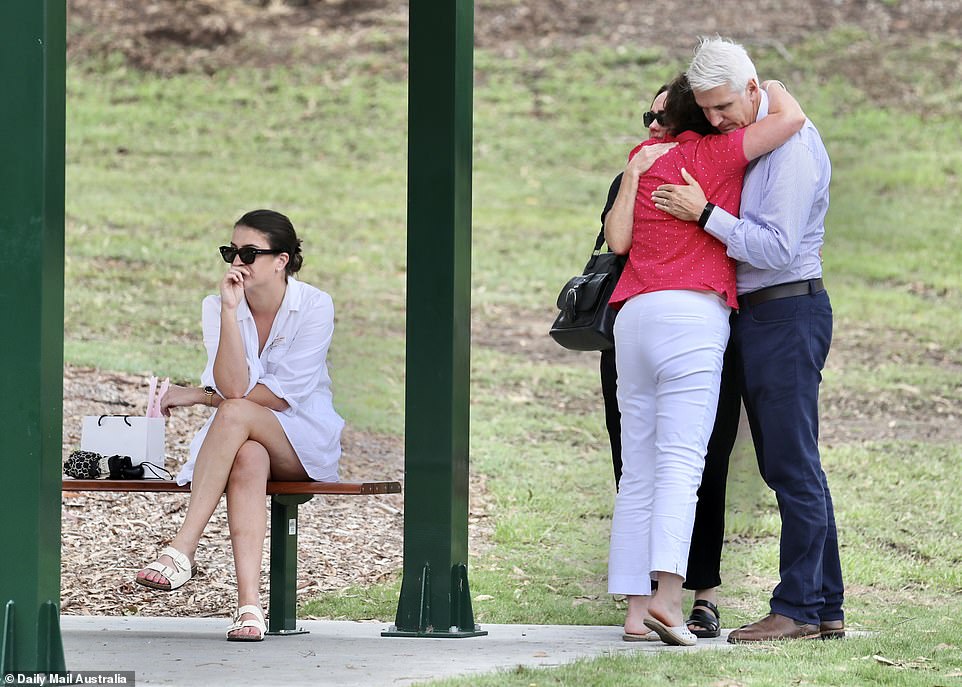 Hannah’s parents also revealed they often visited Hannah’s Place, a memorial set up in Camp Hill, in Brisbane’s east to pay tribute to their daughter and beloved grandkids 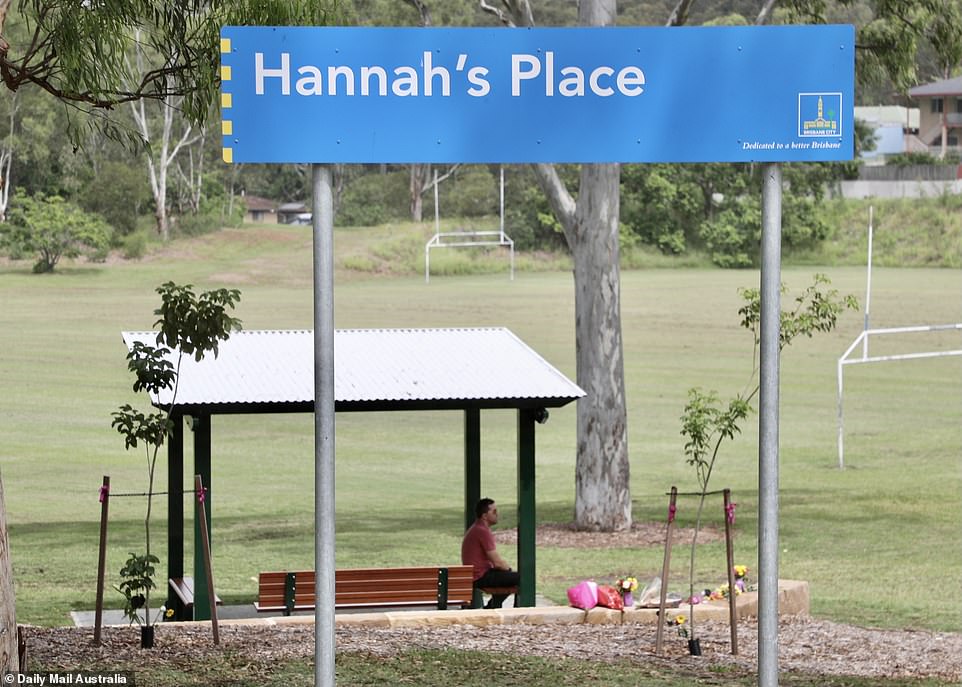 Today marks one year anniversary of Hannah Clarke and her children’s murder. Locals (pictured above) pay their respects at Hannah’s Place in Camp Hill on Friday

‘It is a good healing process for us and also to know that this hasn’t happened in vain,’ Ms Clarke told the ABC.

Hannah suffered years of psychological abuse and controlling behaviour from Baxter, including not allowing her to wear a bikini to the beach when driving and creating a joint Facebook account which he closely monitored.

Mr Clarke feels the wheel is turning in Queensland when it comes to criminalising coercive control, and that it has justified the couple’s tireless advocacy work in the community.

Hannah’s parents also revealed they often visited Hannah’s Place, a memorial set up in Camp Hill, in Brisbane’s east to pay tribute to their daughter and beloved grandkids.

‘[We think about] past memories, good times I suppose … and missing the three little munchkins,’ Mr Clarke said.

‘[Having them around] was chaos, but it was wonderful chaos.’ 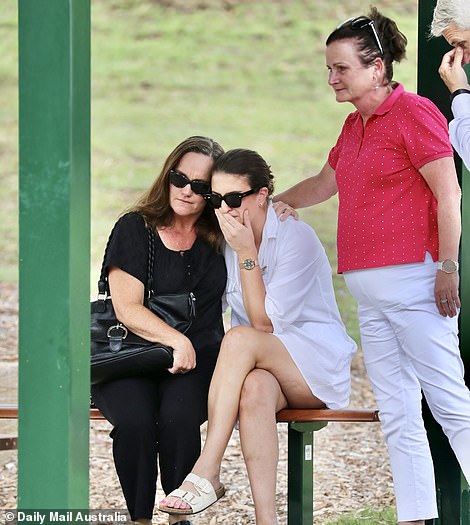 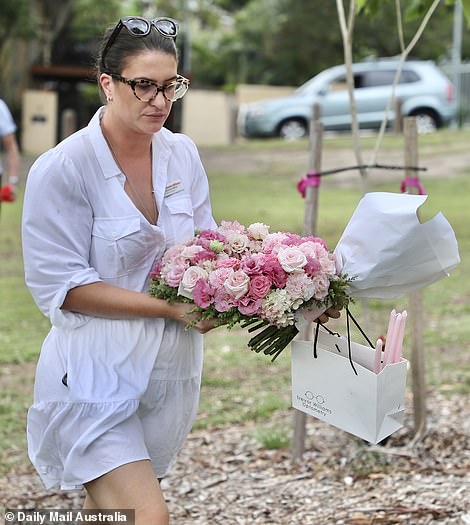 Hannah suffered years of psychological abuse and controlling behaviour from Baxter, including not allowing her to wear a bikini to the beach when driving and creating a joint Facebook account which he closely monitored 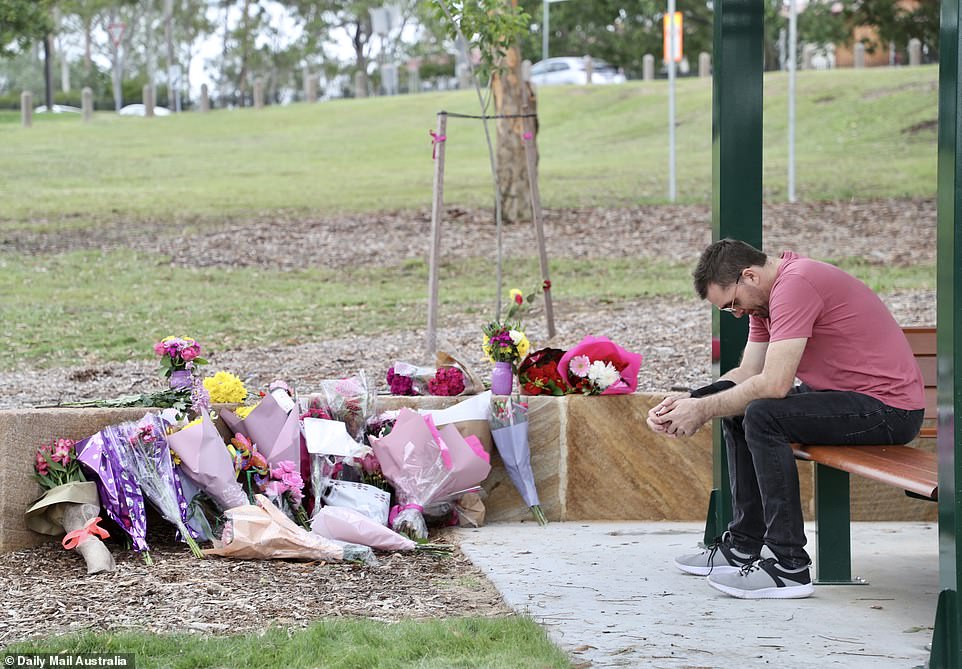 The anniversary was an emotional moment for those in attendance (pictured above), as the Clarke’s try and again piece together their lives 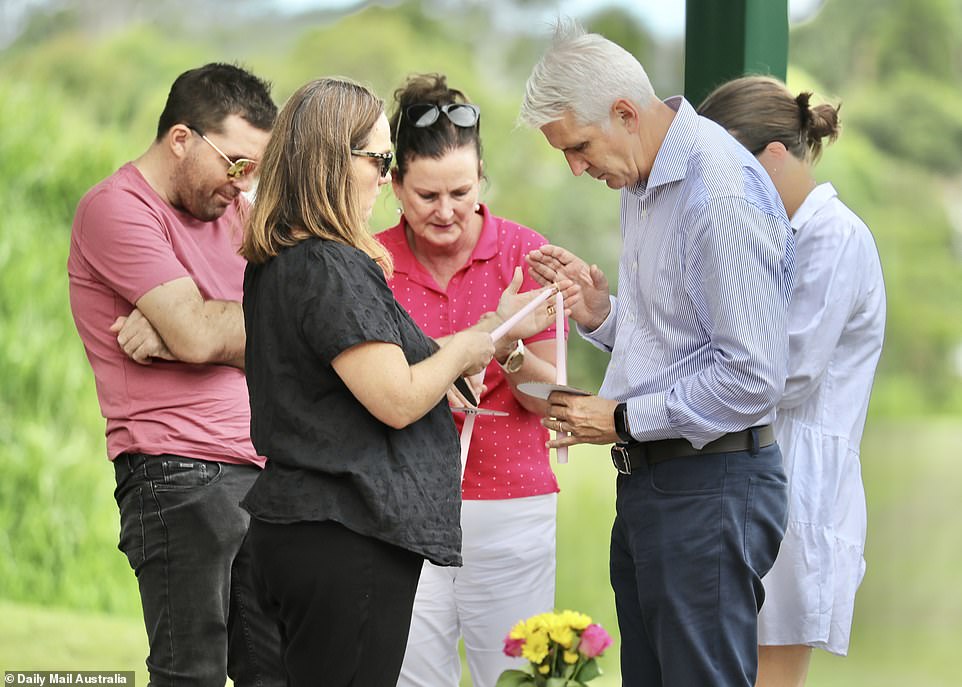 It was a challenging day for many who attended the park, with plenty of mourners still unable to grasp the senseless tragedy 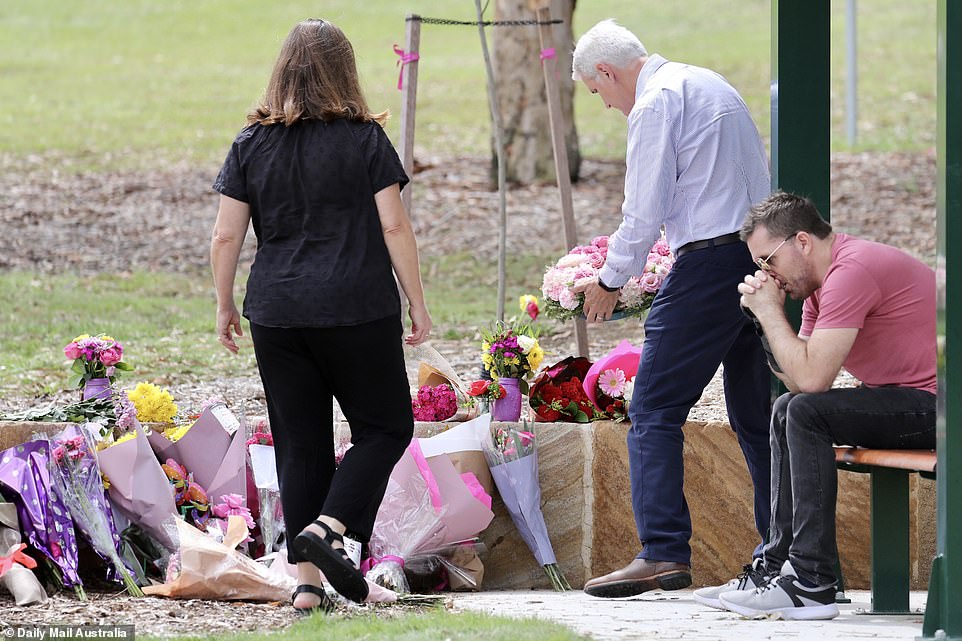 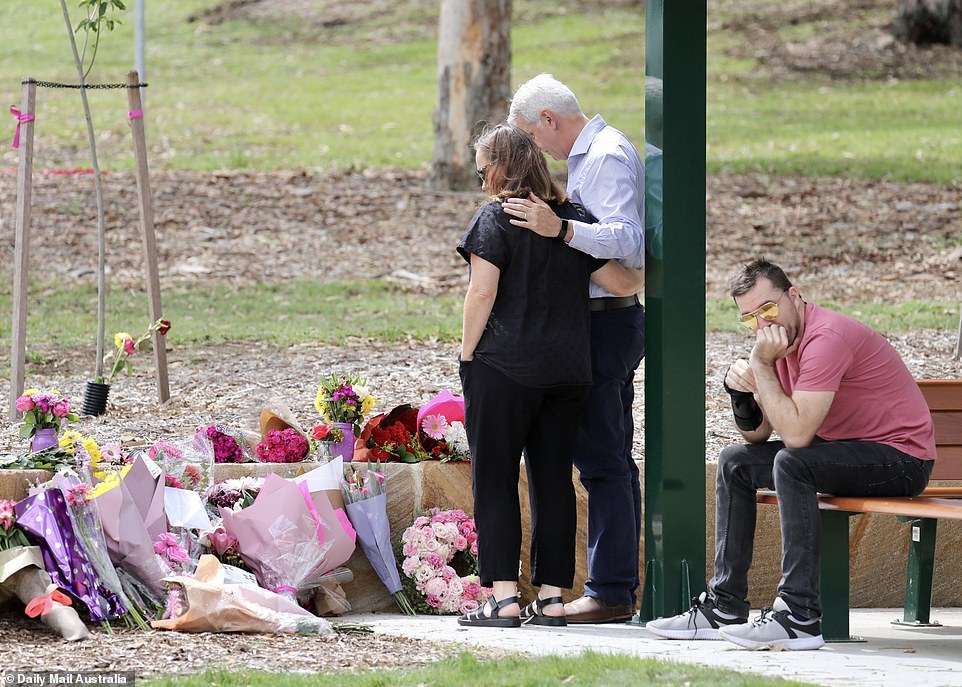 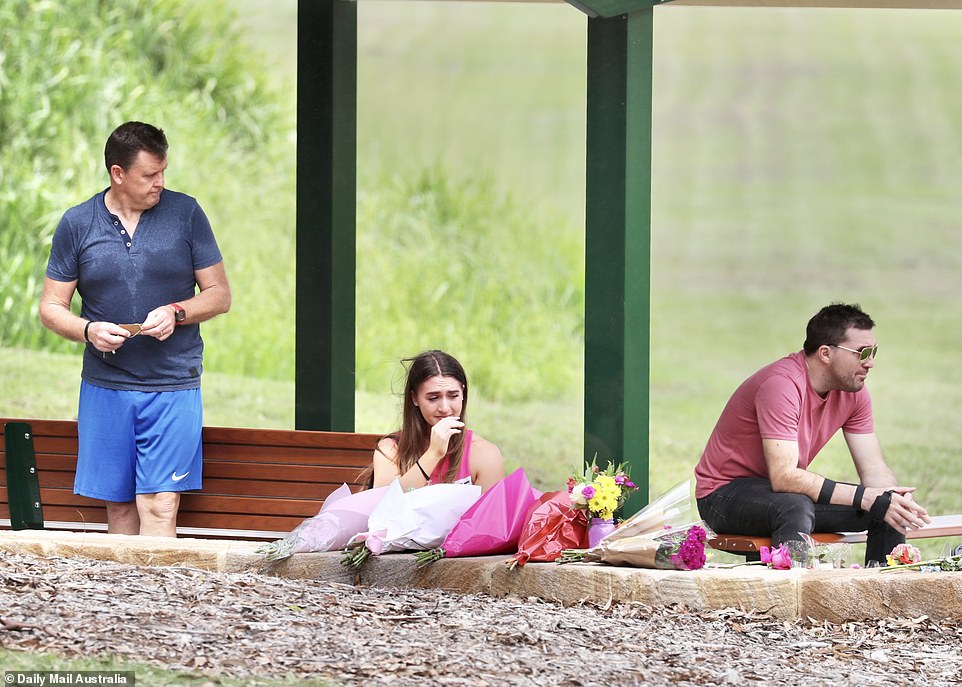 Across the state, Brisbane residents were encouraged to light a candle in their family’s memory at 5:30pm – the exact time Hannah died in hospital a year ago.

The Brisbane City Council planned to light the Story Bridge, Victoria Bridge, City Hall and Reddacliff Place in pink in the CBD to honour Hannah and the children.

On Thursday, Hannah Clarke’s grieving family were inadvertently caught in the crossfire of Facebook’s war on Australian news after their tribute page was shut down on the social media platform.

Some of Australia’s most important services have been gagged after the Australian government proposed legislation which would require services like Facebook and Google to pay for news.

Rather than lock in deals with Australian outlets like Google has, nine million daily Australian Facebook users instead woke on Thursday to find their access to news on the app had been revoked. 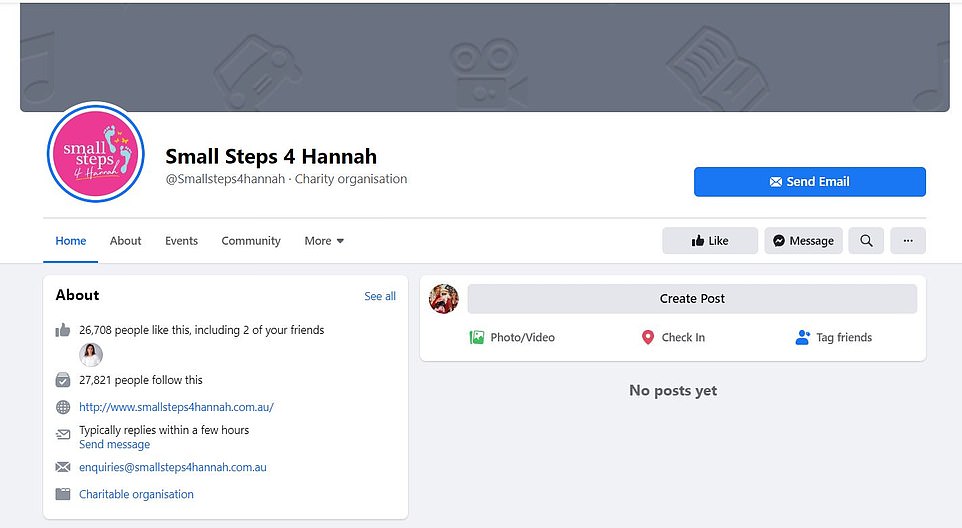 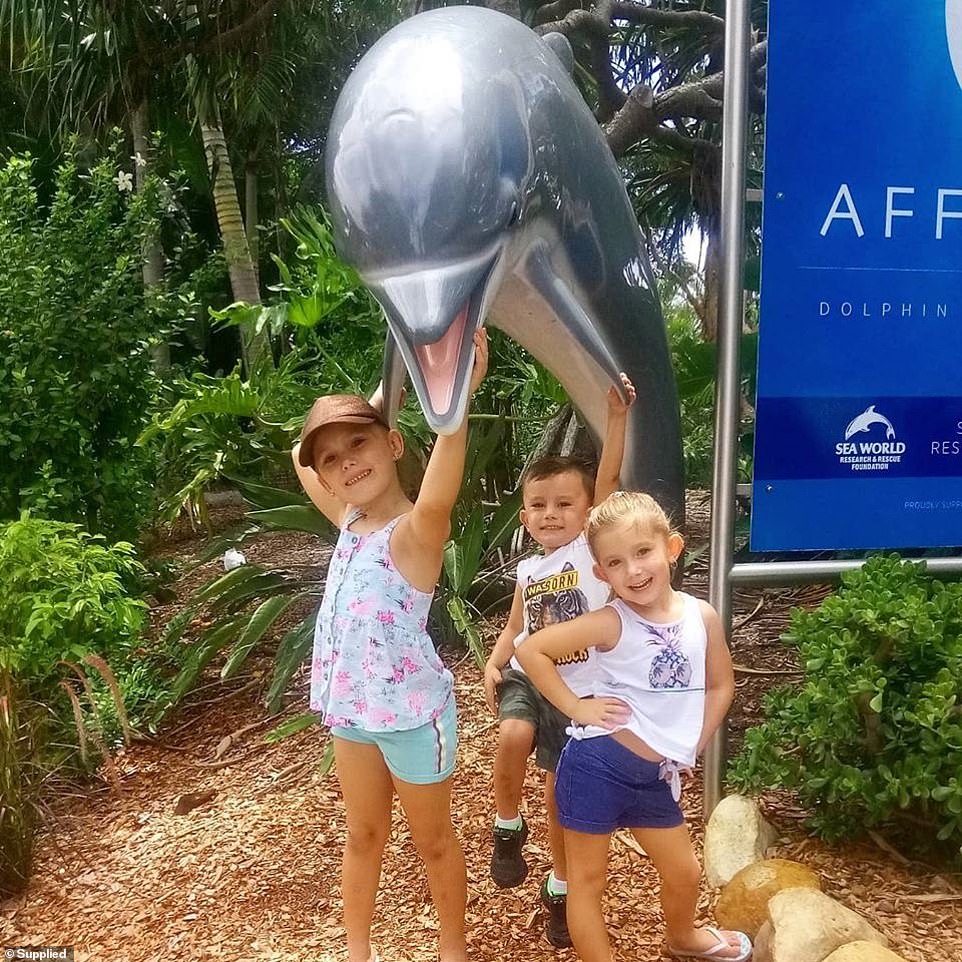 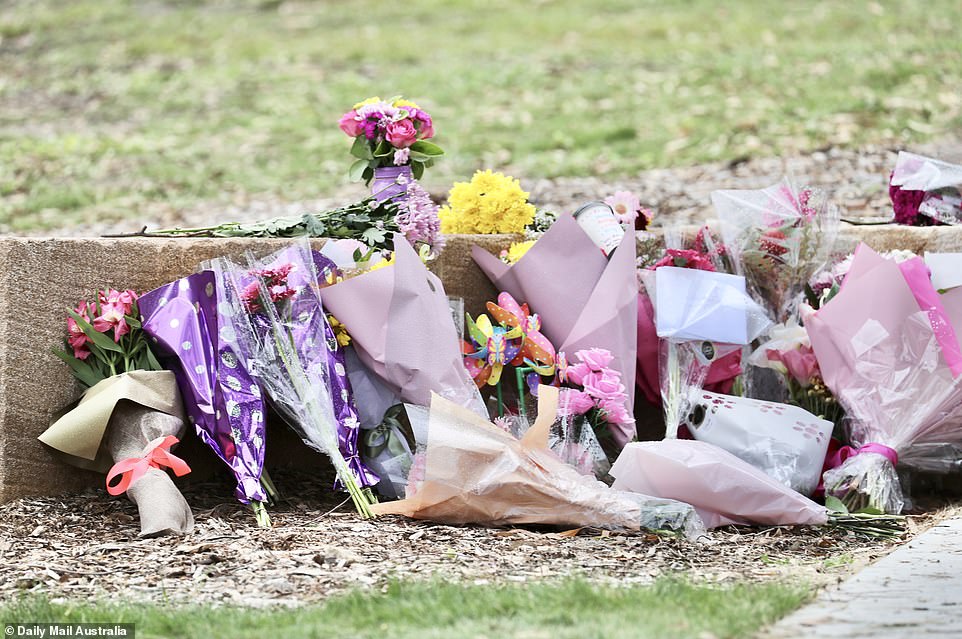 The foundation was established after 31-year-old Hannah was doused in petrol and set alight alongside her three children by her possessive estranged husband, Rowan Baxter, a year ago today.

Hannah bravely detailed the attack to police twice before succumbing to burns covering 97 per cent of her body.

As bystanders tried to rescue Hannah and her three babies, Baxter brandished a knife and told witnesses to ‘let her burn’ before fatally stabbing himself.

Friday marked the one year anniversary of the brutal attack, and Mr and Mrs Clarke had planned to use their Facebook platform to communicate with followers on the page. 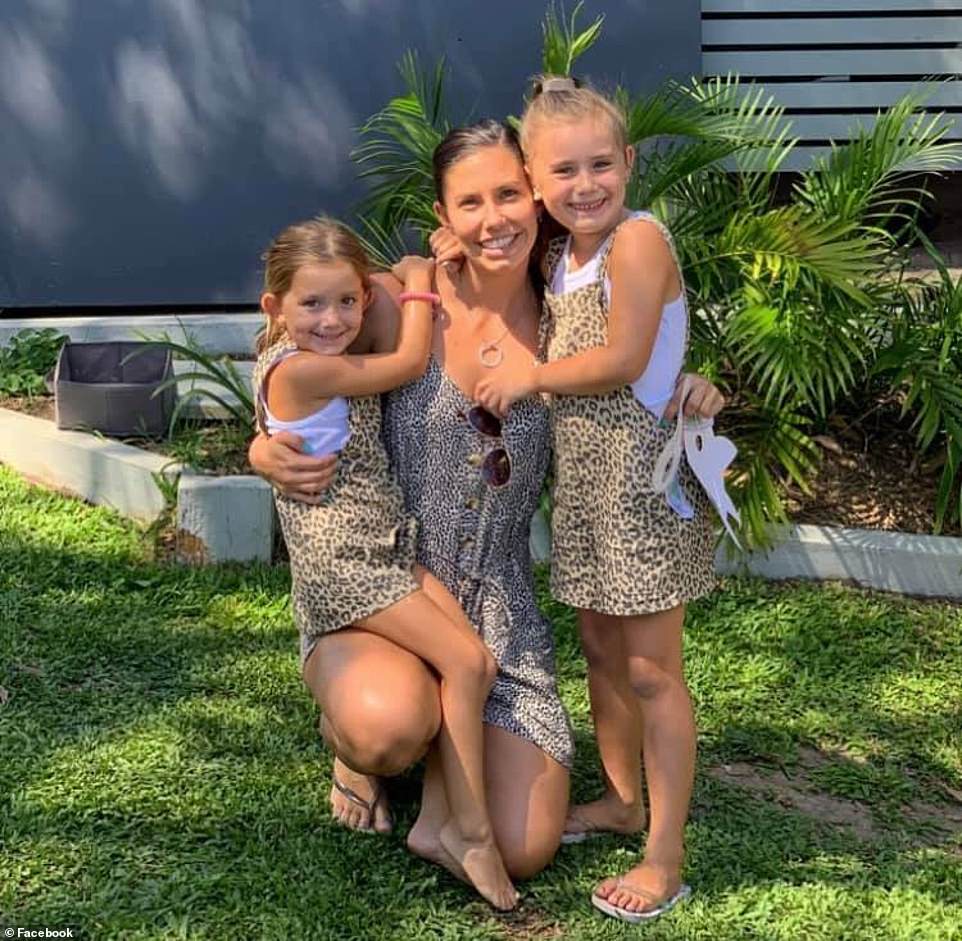 Hannah Clarke is pictured with her two daughters Aaliyah, six, and Laianah, four 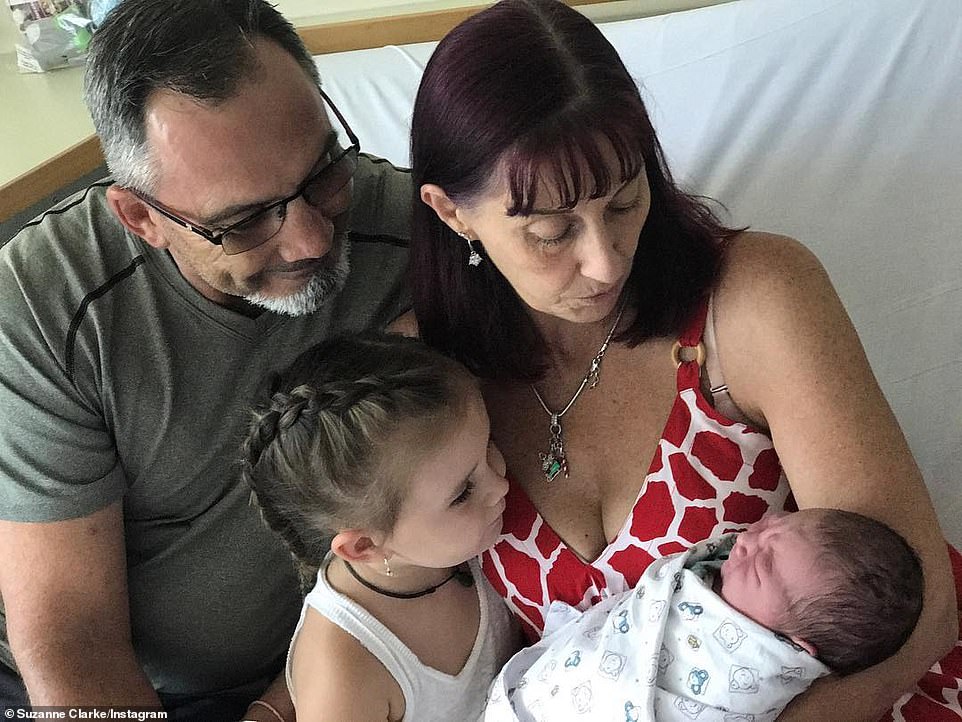 Hannah’s parents Lloyd and Sue are pictured with two of their grandchildren. The grieving couple are speaking out as a reminder that domestic violence can happen in any postcode and any class

Small Steps 4 Hannah is not affiliated with any media organisations, and instead hoped to raise awareness about the detrimental impact of coercive control in the community.

The couple hoped to shine a light on the topic after learning Hannah was herself a victim of coercive control within her relationship, yet didn’t know what signs to look out for.

Premier Annastacia Palaszczuk announced on Wednesday she had established a task force to consult with survivors of domestic, family, and sexual violence to better understand the needs of victims.

The task force will report back to the government with its findings in October, when Ms Palaszczuk hopes to pass laws to criminalise the behaviour.

And while Mr and Mrs Clarke are thrilled with the outcome, their limited access to the Facebook page has put a dampener on their spirits.

‘It’s very upsetting,’ Mrs Clarke said of the censorship. ‘We were wanting to announce one of our new ambassadors. It’s very, very disappointing.’

Prior to her death, Hannah separated from Baxter and learned she was a victim of coercive control.

Coercive control is categorised as an insidious form of family violence which slowly restricts victims and strips them of their power within a relationship.

In Hannah’s relationship, Baxter dictated what she could and couldn’t wear, would go through her phone and limited the time she could spend with friends and family.

Offenders also often seize control of their victim’s finances, though this wasn’t the case with Hannah because Baxter was not smart enough to handle the money.

‘Coercive control, like other forms of domestic and family violence, needs to be everybody’s business,’ Ms Palaszczuk said in a statement.

‘We’ve seen legislation against coercive control in places like the UK, and it’s important that we too have legislation in place to better protect victims.’

While Lloyd and Sue Clarke can’t access the Facebook page, they previously revealed how they would honour Hannah and their grandchildren on the anniversary of their deaths this Friday. 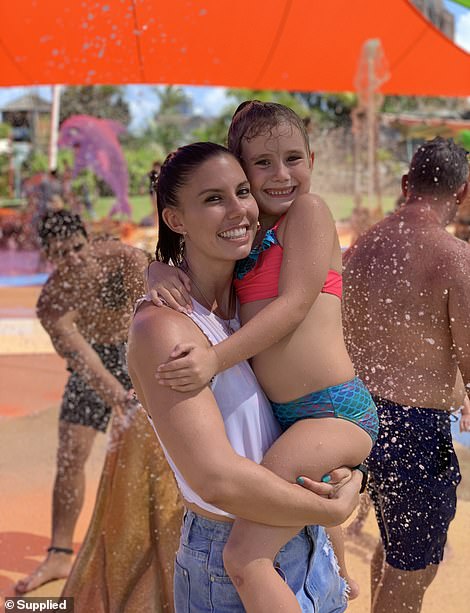 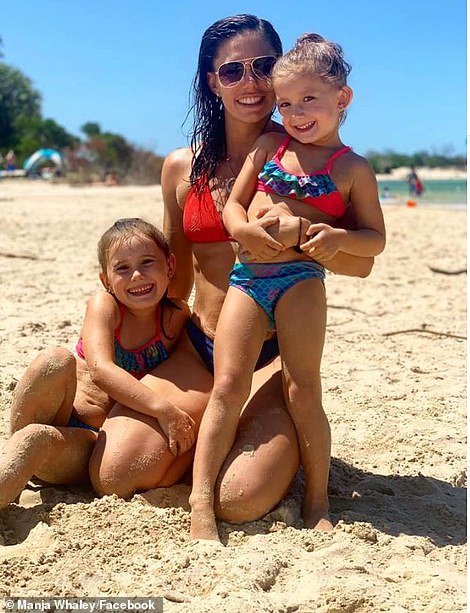 The Clarke’s will light a candle to represent Hannah, Aaliyah, Laianah and Trey on Friday afternoon, and have encouraged the public to do the same 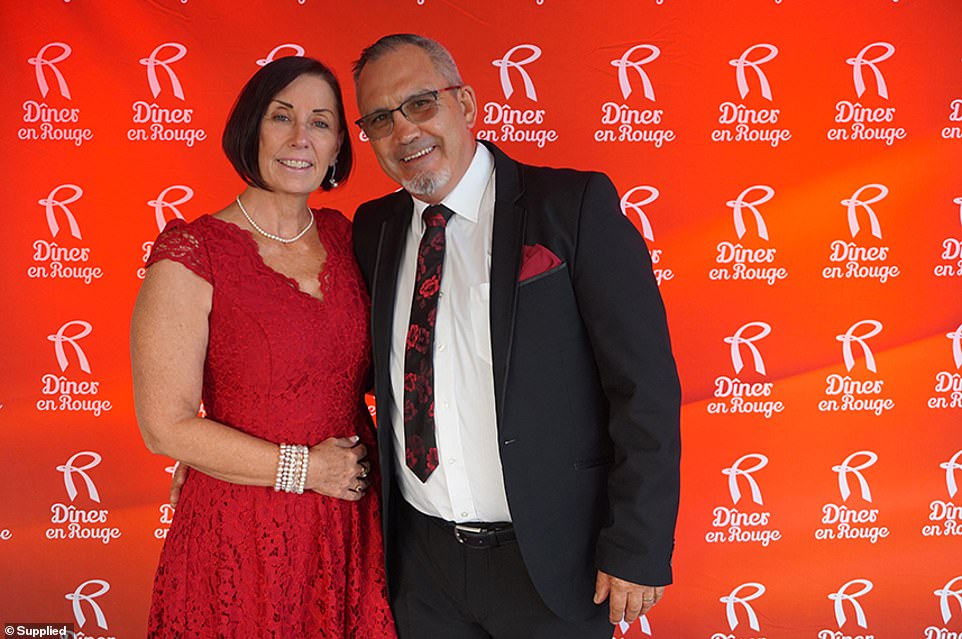 The Clarke’s lit a candle to represent Hannah, Aaliyah, Laianah and Trey on Friday afternoon, and encouraged the public to do the same.

The purpose of lighting candles is to remember the late family as ‘bright, happy people who brought light to everyone they met,’ Mrs Clarke explained.

Her husband said the ‘light’ will come after ‘our family and friends have been through some pretty dark times in the last 12 months’.

‘As the sun goes down we invite you to light a candle for them and for all victims of domestic and family violence,’ Mr Clarke said.

Mrs Clarke also encouraged religious people to pray for a ‘lighter and happier world’ and to help ‘keep the flame burning until there is no more darkness’. 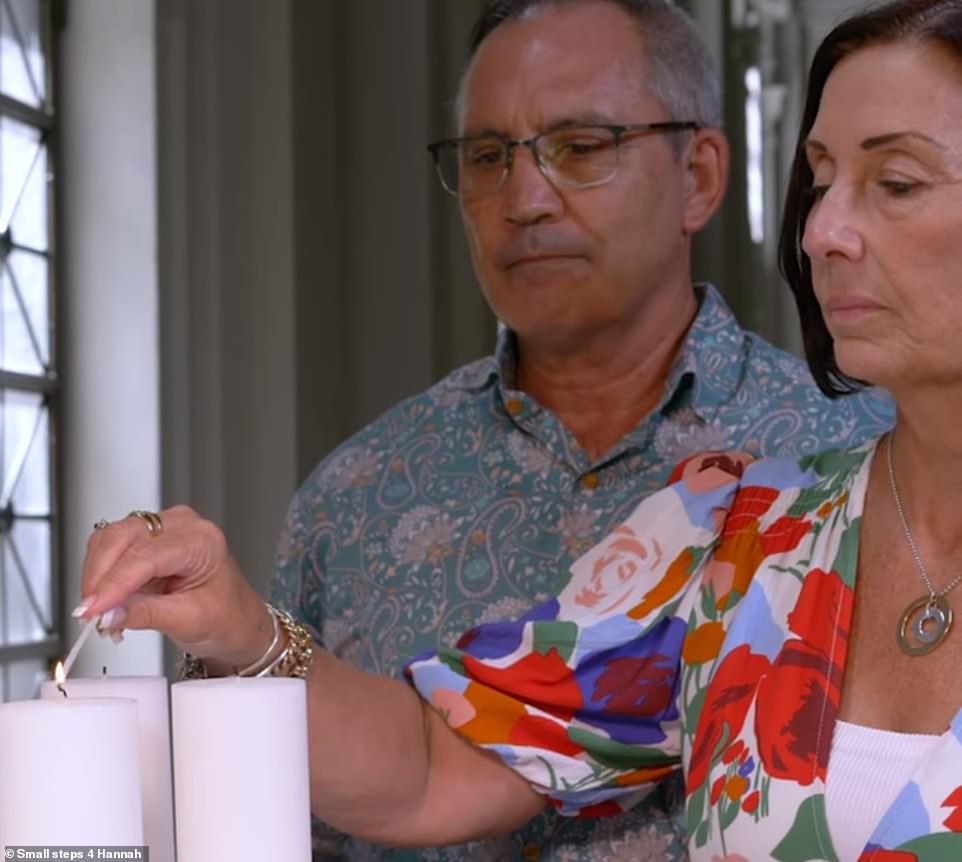 This Friday, Lloyd and Sue Clarke will light a candle to represent each of the lives lost on February 19, 2020

WHAT IS COERCIVE CONTROL?

Coercive control is an ongoing and insidious form of domestic violence which is less often spoken about or recognisable.

A victim of coercive control often has their rights and civil liberties slowly stripped in a manner that mightn’t appear as aggressive as physical abuse.

The abuser uses strategies to control their victim in aspects of their lives, from telling them who they can and can’t speak to, where they can go, what they can wear and how they can spend their money.

The abuse is illegal in several countries, but has been largely overlooked in Australia.

Hannah Clarke’s death brought the conversation to the forefront of national and public interest.

Almost a year on, Hannah’s parents Sue and Lloyd are campaigning for coercive control laws to be implemented in Australia. If they were earlier, they have no doubt their daughter could still be alive.

If Hannah was living in Scotland, where coercive control is a crime, Baxter ‘would have been in jail and Hannah and the kids would have been alive,’ Lloyd explained.

In an unofficial test they conducted comparing Baxter’s behaviour to a checklist of coercive control patterns in Scotland, he was guilty of almost all of them.

‘All of them except anything to do with finances, basically,’ Lloyd said. ‘He was pretty useless with finances.’

At the end of the checklist, the data found Baxter was ‘a 900 per cent chance of hurting Hannah’.

‘If we can come up with our own law like this in Australia, it could save so many victims.’

The primary indicators of coercive control according to healthline are: