Engineers believe a Miami condo that collapsed killing at least 24 residents may have been built using less reinforced steel than the plans called for – as officials planned to blow up the remaining wing with 121 people still missing.

Inspectors identified the issue at critical places in the base of the building in the first details about possible issues in the quality of construction at the 13-story Champlain Towers South in Surfside.

Forensic engineering expert Allyn E. Kilsheimer confirmed there were signs that the amount of steel used to connect concrete slabs below a parking deck to the building’s vertical columns may have been less than specified in the original drawings. 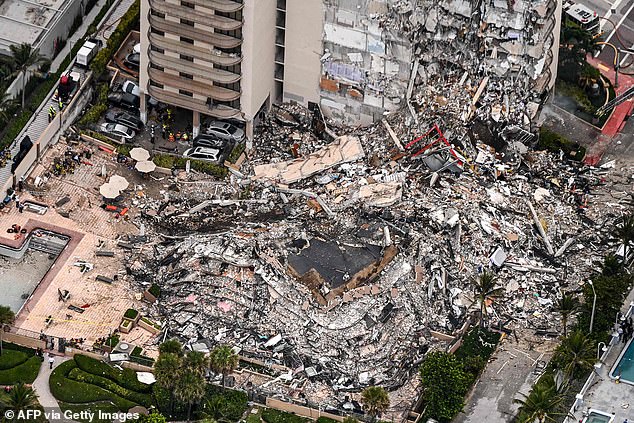 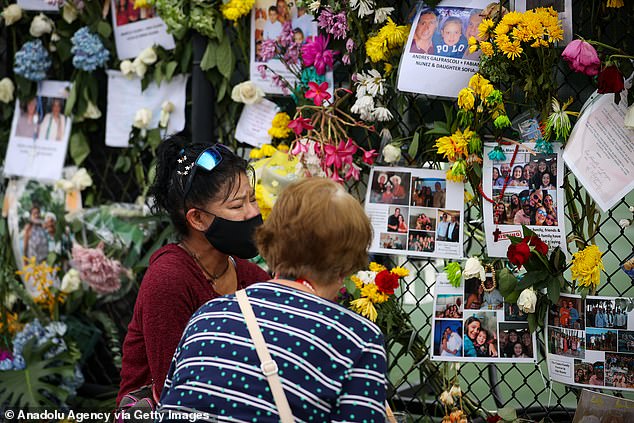 Family members hold vigil for the missing victims of the collapse, which horrified the country

‘The bars might not be arranged like the original drawings call for,’ Mr Kilsheimer told the New York Times.

He said the investigation was in its early stages, and he needed to examine the site further to confirm his theory. It remains unclear if this suspected steel deficiency may have led to the building’s collapse, amid multiple claims there were also issued with flooding, which corroded the building’s concrete structure.

R. Shankar Nair, a member of the National Academy of Engineering, also noticed inconsistencies between the design and the steel that remained visible in the columns.

Engineers pointed to three damaged columns in a western section of the building that remains intact, which were part of an exterior deck that served as a ground-level parking area.

These were meant to be connected to horizontal slabs embedded with eight rods of reinforcing steel, yet by counting the ones left in the rubble they appear to be fewer in number.

The death toll from the disaster currently sits at 24, and is likely to stay that way for some time. Recovery operations have been paused while demolition experts prepare to bring down the remaining wing of the condo building with explosives, amid fears Tropical Storm Elsa could demolish it.

Engineers are working to ensure the condemned wing collapses in on itself, and not on top of the existing recovery site, with Mayor of Surfside Charles Burkett insisting people could still be pulled alive from its rubble.

Asked on Sunday whether he was pursuing a ‘search and rescue, not a recovery effort’, Burkett said: ‘It’s absolutely not a recovery effort. I constantly am telling people about the BBC documentary, which outlines survivability after a building collapse, where they pulled a lady in Bangladesh out after 17 days.

‘So we’re not even near that. And, you know, there’s nobody- nobody in charge really talking about stopping this rescue effort.

‘And this rescue effort, as far as I’m concerned, will go on until everybody’s pulled out of that debris.’ 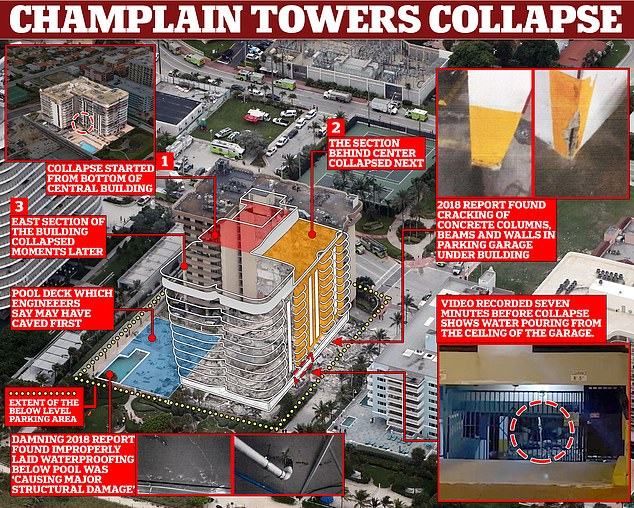 This graphic shows how most of Champlain Towers South collapsed on Thursday June 24. The surviving wing will be demolished in the coming days amid fears over its stability

Miami-Dade Mayor Daniella Levine Cava issued a State of Emergency Saturday for Tropical Storm Elsa and made the ‘dramatic decision’ to sign an emergency order to raze the building before the storm hits the area Monday afternoon.

Florida Gov. Ron DeSantis told a press conference that they wouldn’t let people who escaped go back and get their possessions before the demolition.

‘At the end of the day, that building is too unsafe to let people go back in,’ DeSantis said. ‘I know there’s a lot of people who were able to get out, fortunately, who have things there. We’re very sensitive to that. But I don’t think that there’s any way you could let someone go back up into that building given the shape that it’s in now.’

The Miami Herald reported that some pets are still missing, including a cat called Coco who lived on the fourth floor. A search of the surviving wing did not uncover any pets – although searchers were unable to enter intact apartments to get a proper look.

Meanwhile, multiple reports have emerged of warnings made by engineers and officials over the 12-story tower’s declining condition in the weeks, months and years before its collapse.

It recently emerged that one of the tower’s managers sent an email to complaining city officials were delaying urgent repairs just days before the 13-story structure collapsed.

The condo was set to undergo extensive repairs as part of a 40-year safety recertification due this year, and it appears the complex’s management team were eager to have the work done as soon as possible.

Back in 2018, they hired Frank Morabito Consultants to inspect the complex ahead of the recertification process.

A report from the company raised concerns about the pool deck area, in which the waterproofing was failing, and the underground parking garage which was riddled with ‘abundant’ cracking.  They quoted $16 million dollars worth of repair work, according to the Miami Herald.

Morabito’s firm also completed a survey in October 2020, in which they spoke of ‘curious results’ after taking samples from the building. Further information on what exactly those results were has not yet been shared.

By April 2021, the complex had reportedly deteriorated further, with condo board president Jean Wodnicki writing to the building’s owners, stating: ‘We have discussed, debated and argued for years now…. indeed the observable damage such as in the garage has gotten significantly worse since the initial inspection.’

On May 13 – just six weeks before the condo collapsed – Frank Morabito and condo management finally met with officials from the Surfside Building Department to discuss  the proposed repair work. 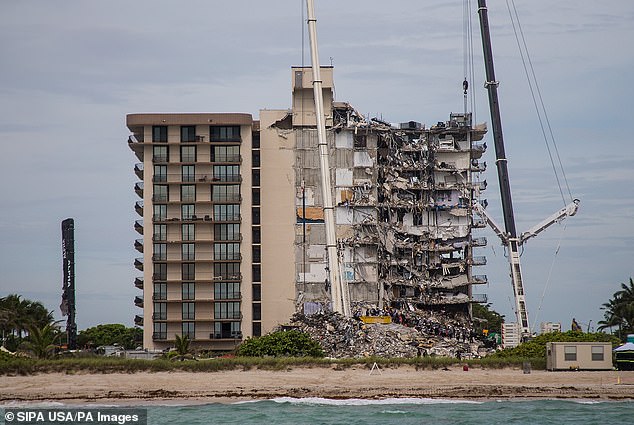 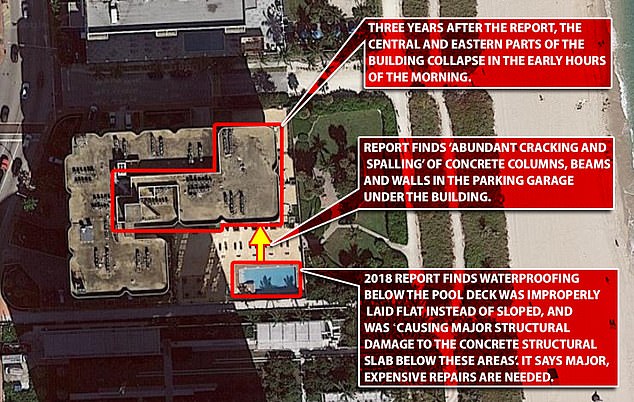 Back in 2018, they hired Frank Morabito Consultants to inspect the complex ahead of the recertification process. A report from the company raised concerns about the pool deck area, in which the waterproofing was failing, and the underground parking garage which was riddled with ‘abundant’ cracking. They reportedly quoted $16 million dollars worth of repair work

The Miami Herald reports that the condo managers had tried for a week to set up that meeting.

Afterwards, Morabito sent off an e-mail to the department saying, in part: ‘We respectfully request that we hear from the Town in the near future so we can make any necessary revisions to our contract drawings.’

However, there was no response for more than a month.

That silence prompted Scott Stewart, the condo’s building manager, to write to James McGuinness, the director of the Surfside building department, on June 21.

‘As we are out to bid on our project [we] need to get to answers to these questions… This is holding us up and costs are going up and out 40 year is coming up fast,’ Stewart wrote.

On June 23 – just one day before the condo collapsed – McGuinness replied, saying he needed more information about a temporary parking lot which would need to be set up for workers who would do the repairs.

He said he wanted details on the parking lot in order to ‘prevent the site from becoming a dust bowl or a mud bowl.’

On the same day, McGuinness allegedly went to the top of the roof of the Chamberlain Towers condo complex to inspect it.

He later told investigators: ‘There was no inordinate amount of equipment or materials or anything on the roof that caught my building official’s eye that would make me alarmed as to this place collapsing’.

DailyMail.com has reached out to McGuinness and the Surfside Building Department for comment. 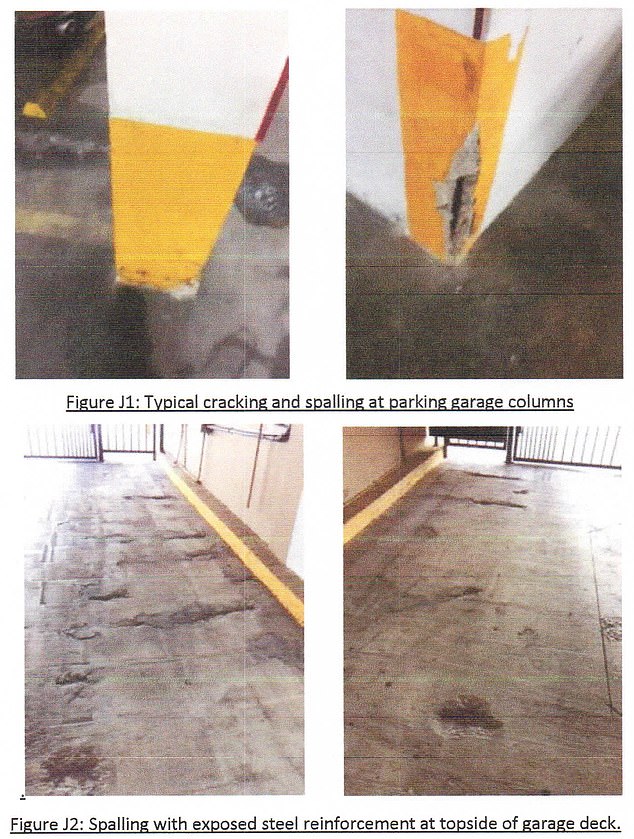 Slides from the 2018 report are pictured above 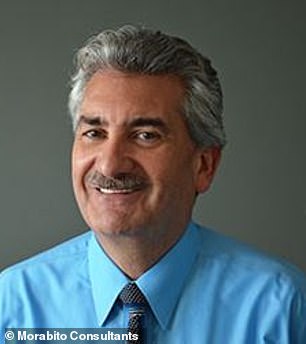 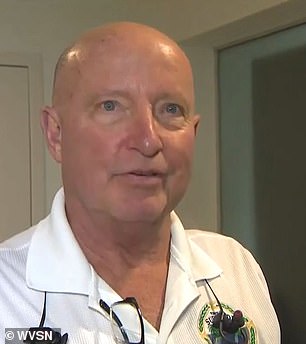 Frank Morabito of Frank Morabito Consulants is pictured at left. He completed an initial inspection of the building back in 2018 and flagged various problems. He was eager to conduct repairs, which were seemingly being delayed by local officials. Surfside Building Department Director James McGuinness is pictured at right

So far, six members of one of the Florida rescue teams tested positive, Miami-Dade Fire Chief Alan Cominsky said, and the team was removed from the site.

More than 420 other Florida search and rescue crew members were tested and all came back negative, Cominsky said Saturday.

In terms of the demolition, officials were told Friday evening that it would take weeks to safely tear down the remaining structure, but Cava said Saturday morning that the Maryland-based demolition company Controlled Demolition Inc. came forward last night.

Controlled Demolition Inc. says on its website that it has demolished ‘thousands of structures across six continents using explosives.’

Cava said they work fast, their engineers have studied the scene Saturday and said they could demolish the building before the storm impacts Southeast Florida.

Meteorologists predict the eye of the storm, which was downgraded from a hurricane to a tropical storm, won’t directly hit the area, but Surfside and the surrounding municipalities could feel the brunt of strong wind gusts. 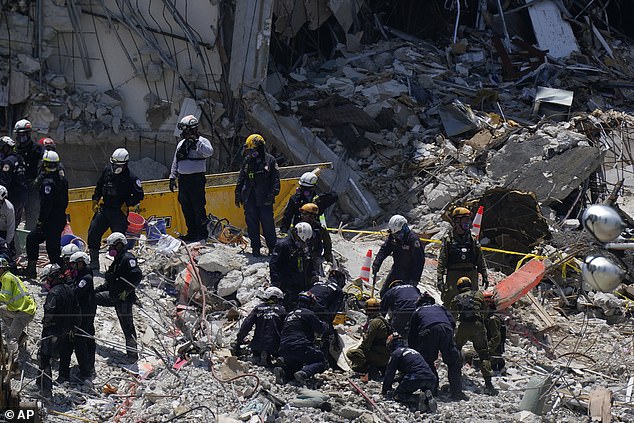 Officials fear those gusts would knock down the remaining structure ‘in a direction we don’t want it to go,’ Surfside Mayor Charles Burkett said.

Before the Saturday morning press conference, DeSantis and his wife Casey visited the makeshift memorial near the fallen building.

They placed flags in the memorial and paid their respects to the victims.

‘This was a tragedy like we’ve never seen because you just don’t expect a building to fall,’ DeSantis said during Saturday’s press conference.

A follow-up meeting will be held in the afternoon to finalize details of the demolition, which could be a precarious operation as experts enter the building to bore into the structure to install explosives.

Fire Rescue Assistant Fire Chief Raide Jadallah said the remnants of the demolished building would be removed immediately after with the intent of giving rescuers access for the first time to the garage area that is the focus of the search.

Currently, rescuers can’t go above the first floor because the building is so unstable, Cominsky said.