Engineers have created ‘the whitest paint yet’

Engineers in the US claim to have created ‘the whitest paint yet’ – which they say will help tackle global warming.

The ultra-white coating, developed at Purdue University in Indiana, reflects up to 98.1 per cent of sunlight while sending away infrared heat.

Currently, paints on the market designed to reject heat only reflect somewhere between 80 and 90 per cent of sunlight.

Paints could offer an environmentally-friendly way of reducing the power required to keep them constantly running in balmy weather. 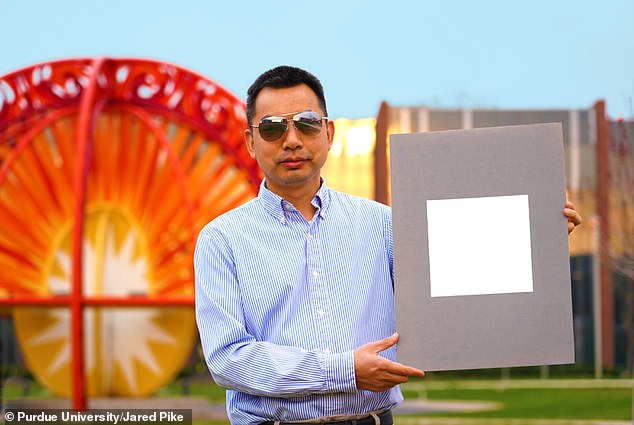 Xiulin Ruan, a Purdue University professor of mechanical engineering, holds up his lab’s sample of the ‘whitest paint on record’

It can also cool surfaces 8°F below their surroundings under strong sunlight during noon hours.

The paint’s solar reflectance is so effective, it even worked in the middle of winter.

During an outdoor test with an ambient temperature of 43°F, the paint still managed to lower the sample temperature by 18°F.

The Purdue University team last October revealed a white paint that reflects 95.5 per cent of sunlight – but at 98.1 per cent, this new version is even more effective.

Majority in US disapproves of abortion ruling, poll says

Last year’s ‘whitest paint’ was a formulation made of calcium carbonate, an earth-abundant compound commonly found in rocks and seashells.

‘If you were to use this paint to cover a roof area of about 1,000 square feet, we estimate that you could get a cooling power of 10 kilowatts,’ said Xiulin Ruan, a professor of mechanical engineering at Purdue University.

‘That’s more powerful than the central air conditioners used by most houses.’

The new record set by Purdue’s white paint, which is detailed in the journal ACS Applied Materials & Interfaces, is the result of six years of research.

The project has built on attempts going back to the 1970s to develop radiative cooling paint as a feasible alternative to traditional air conditioners.

Ruan’s lab had considered over 100 different materials, narrowed them down to 10 and tested about 50 different formulations for each material.

The researchers showed in their study that like commercial paint, their barium sulfate-based paint can potentially handle outdoor conditions.

Two features give the paint its extreme whiteness – one is the paint’s very high concentration of barium sulfate, which is also used to make photo paper and cosmetics white.

‘We looked at various commercial products, basically anything that’s white,’ said Xiangyu Li, a postdoctoral researcher at the Massachusetts Institute of Technology (MIT) who also worked on this project.

The second feature is that the barium sulfate particles are all different sizes in the paint. 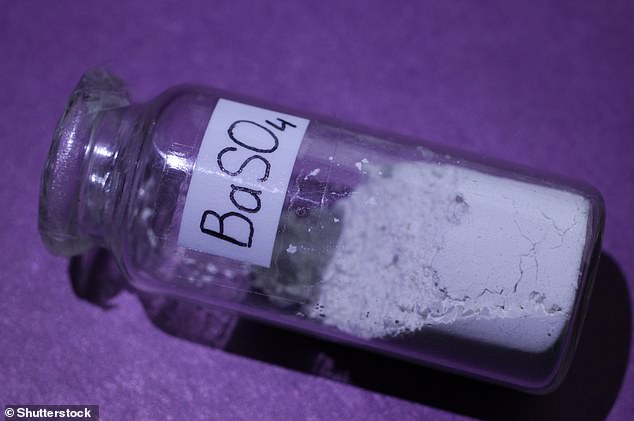 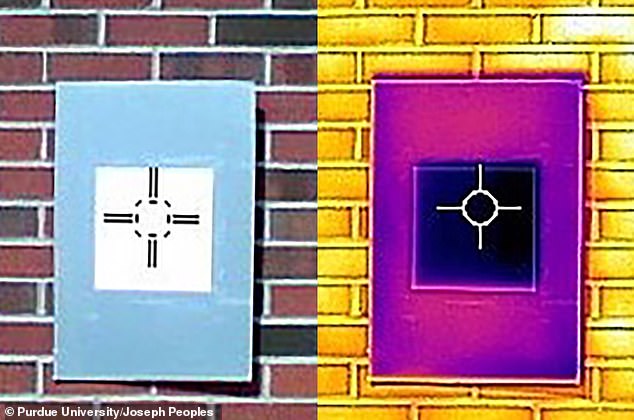 An infrared camera shows how a sample of the whitest white paint (the dark purple square in the middle, right) actually cools the board below ambient temperature, something that not even commercial ‘heat rejecting’ paints do.

How much each particle scatters light depends on its size, so a wider range of particle sizes allows the paint to scatter more of the light spectrum from the sun.

‘A high concentration of particles that are also different sizes gives the paint the broadest spectral scattering, which contributes to the highest reflectance,’ said Joseph Peoples, also at Purdue University.

The technique that the researchers used to create the paint also is compatible with the commercial paint fabrication process.

At 98.1 per cent reflectivity, researchers say there’s only a little bit of room to make the paint whiter, but not much without compromising the final product.

‘The higher the concentration, the easier it is for the paint to break or peel off.’ 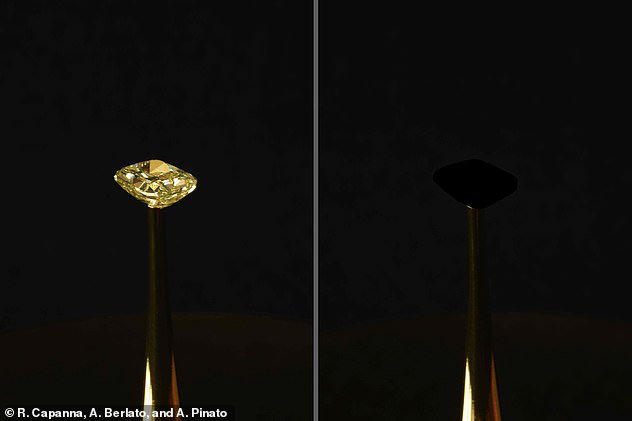 ‘None more black’: Researchers from Massachusetts Institute of Technology (MIT) covered a £1.6 million diamond (pictured before and after) with the substance in a bid to prove its blackness

The researchers believe that this white may be the closest equivalent to some of the blackest blacks ever developed.

A product called Vantablack, developed by Surrey NanoSystems, absorbs up to 99.965 per cent of visible light.

However, in 2019, Vantablack was bettered by a team at MIT, who pushed this to absorption rate to 99.995 per cent.

MIT covered a £1.6 million diamond with the Spinal Tap-worthy substance in a bid to prove its blackness – and it promptly appeared to vanish.

The MIT material was made from vertically aligned carbon nanotubes – microscopic filaments of carbon – grown on a surface of chlorine-etched aluminium foil.

Heat and light are both different types of energy. Light energy can be converted into heat energy.

A black object absorbs all wavelengths of light and converts them into heat, so the object gets warm.

A white object reflects all wavelengths of light, so the light is not converted into heat and the temperature of the object does not increase noticeably.

The amount of heat absorbed is also affected by how light or dark an object is.

Kim Gibson, left, and another advocate hold signs Friday outside the only abortion clinic in Mississippi.Rogelio V. Solis (AP)The Jackson Women's Health Organization clinic is known in the...

Majority in US disapproves of abortion ruling, poll says

Daughter of "Roe" is sincere after canceling the right to abortion 4:49 (Trends Wide) -- Most Americans disapprove of the Supreme Court's decision to overturn Roe v. Wade,...