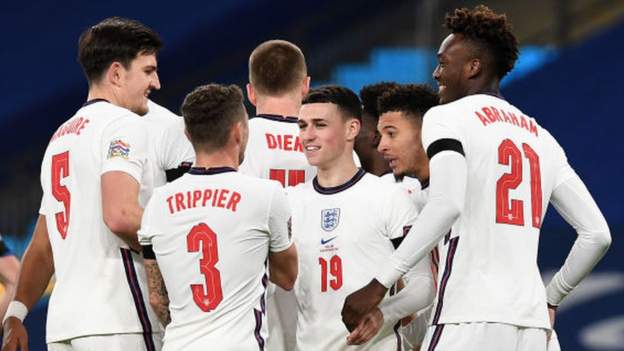 Phil Foden led England’s young brigade in style as they concluded their Nations League campaign with a comfortable win against Iceland in a dead rubber at Wembley.

This final game of the qualifying campaign had nothing riding on it with England’s hopes of reaching the finals ended by defeat in Belgium, and Iceland without a point in Group A2, but it was a game where Gareth Southgate’s emerging youngsters staked their claims.

Manchester City’s Foden, still only 20 and back in the fold after being dropped for breaking Covid-19 protocols in September, also demonstrated his huge potential and growing maturity on the international stage with a fine performance and late strikes as he swept in Jadon Sancho’s pass for his first England goal with 10 minutes left before quickly adding a second with a low shot.

Iceland were reduced to 10 men in the second half when Birkir Saevarsson was shown a second yellow card for dragging back Bukayo Saka as England dominated.

Foden learned a harsh lesson when he was sent home from Iceland and dropped from the next round of England games after breaking Covid-19 protocols in September.

Southgate punished the youngster but rehabilitated him in the squad and was rewarded with a demonstration of just what he can bring to England, now and in the future.

Foden is a bundle of talent and confidence and it was his delivery that offered the invitation for Rice to score the opener, then got the goals his performance deserved late on to push himself right to the forefront of Southgate’s thoughts.

It was summed up in the closing seconds when he showed remarkable skill to pull down a misplaced, skied, clearance from Harry Maguire, controlling and flicking it behind a bemused Icelandic defender.

He made his mistake, paid for it, and showed at Wembley why he is regarded as one of the great hopes for Manchester City and England.

In what has been mixed Nations League campaign for England, Foden illuminated a deserted Wembley.

Southgate defended his side’s approach in the wake of the defeat against Belgium, amid suggestions his ploy of using a 3-4-3 formation with two holding midfield players was too conservative.

Here, with Liverpool captain Jordan Henderson unavailable because of injury, Southgate continued with Rice and Mount but also used both Grealish and Foden to add creativity.

And, in their different ways, all four made a big impact as England won a game that often had the intensity of a training work-out.

Grealish carried on where he left off in Leuven, carrying the ball into dangerous areas, wandering into space and continuing to draw fouls in threatening positions, while Foden was the star of the show.

Arsenal’s teenage defender Saka was another stand-out performer, solid in defence and dangerous in attack. He could have had goals himself but did enough to suggest he will be a serious contender for starting place in future.

Southgate now has until March to weigh up his plans as the Euros come closer and that young brigade will be at the forefront of his mind.