For a decade now Rob Baxter has been Exeter’s undisputed Big Chief. As he showers his club with gold, collecting the most coveted prizes on offer, the question quickly becomes: what is next?

If Exeter beat Wasps on Saturday and add a second Premiership to a first European Cup won last week, would Baxter’s task of turning also-rans to the continent’s top club be complete?

And then would he look to test himself at the highest level with England? 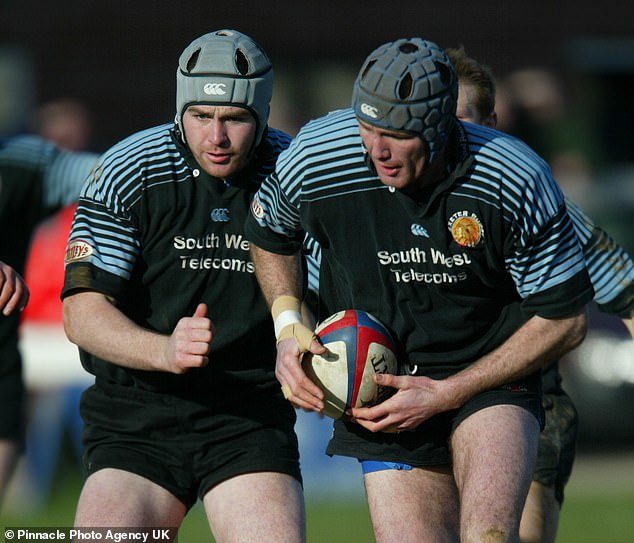 Played for Exeter in the 1960s, helped recruit financier and now-chairman Tony Rowe in 1992, before becoming chairman and director.

Played at Exeter between 1987 and 2005, and was captain for a decade before becoming a coach. Made head coach in 2009 and won Chiefs promotion to the Premiership in 2010, their first title in 2017 and first European Cup last weekend.

Made senior debut in Division 2 in 1997 before retiring in 2013 a Premiership player. Holds the record of Chiefs appearances with 431.

‘Right here and now, no,’ comes the definitive reply from the man himself.

And in three years’ time, when Eddie Jones has left?

‘Well, it would depend if I’m happy here,’ Baxter offers with a grin.

This is not a matter of desire, though – far from it, according to his family.

‘I look at the ambition he has shown with Exeter,’ says his younger brother Richie, 42, who played a record 431 times at No 8 for the Chiefs.

‘And you think quite possibly that ambition would be there to go further on with England, if asked.

‘What he has achieved at Exeter, you need to be an ambitious person to do those kind of things.’ The Baxter family is the golden thread through Exeter’s journey.

Between Richie, Rob and their father John, now 76, the Baxters have played more than 1,000 games for the club stretching back 50 years – not counting the hundreds Rob has coached since taking charge in 2009.

Normally Exeter matches are a family reunion. Father John and mother Roberta, 73, come with Richie and his family, Rob’s wife Jo and their children.

But this time the celebrations after the European Cup win took place in Covid-safe pockets down on the 300-acre farm outside Exeter where all three families still live. 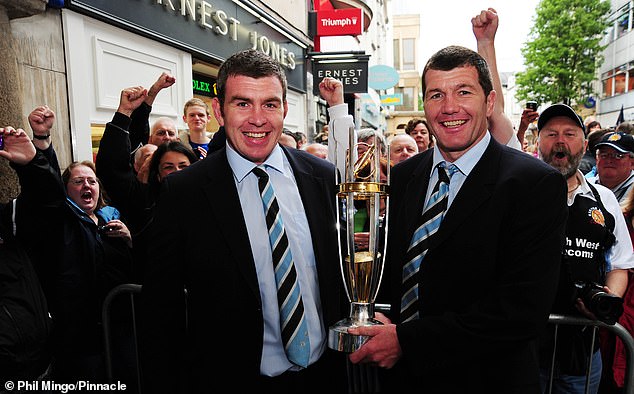 A ‘chinwag’ outside was all Rob could manage with his parents – who still work the farm themselves – although he did enjoy a few drinks with Jo.

‘We had a bit of a giggle, did a few silly things as you do,’ smiles Rob.

‘We managed to sing along to a few songs that we probably shouldn’t have sung along to. I can’t say what ones! It’s too embarrassing.’ Richie, who has heard his brother sing plenty of them first-hand chimes in: ‘He loves the karaoke!’ So did the younger sibling toast his brother with champagne?

‘Well, you’ll know it was a glass of cider!’ Richie quickly corrects.

‘I did have a couple to celebrate the win, but life has to go on. You’ve got to get on with things, especially on a farm.’ Cracking on is engrained on the Baxter psyche.

On Sunday morning Richie was back tending to his 500 sheep and 80 bullocks, which among other things provide chops and steaks for Burrows farm shop in town, before coaching his sons at Crediton RFC. 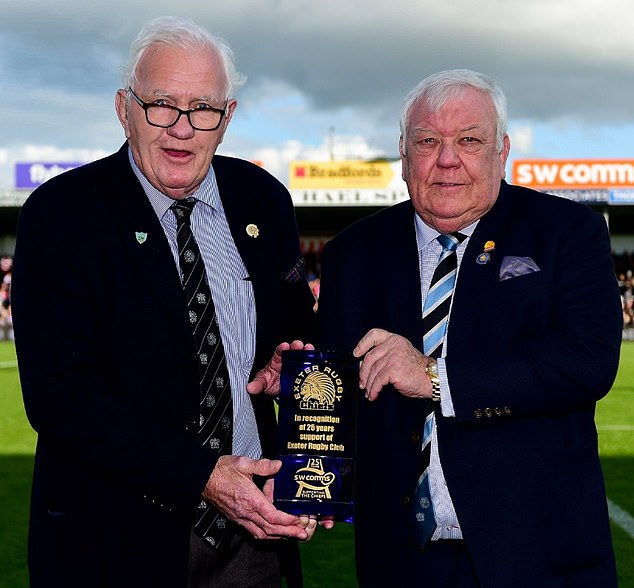 And Rob was already onto new challenges. Beyond Saturday’s match he has a lot to ponder.

Next year handfuls of his Chiefs will be taken away by England for 14 Premiership games, and will not be as fit for Europe after gruelling Tests.

He is driven seeing how far he can propel new stars – like Sam and Joe Simmonds – and wants loads of Lions, all while praying the new Sandy Park hotel gets built and fans come in soon to keep his club afloat in tough times.

‘They’re all fresh challenges to take on,’ Baxter says.

‘All of this won’t mean very much to me and my career at Exeter if we’re a club that fail financially in the next six months.

‘We’d look back on this and go “well that was the year that was and we never managed to do it again because of Covid-19.”’ That desire to keep going sums up Baxter as a second-row. 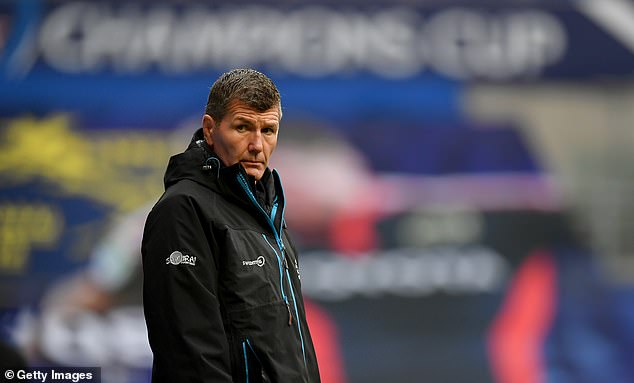 Will James, a Devonian former Gloucester lock used to say of Baxter: ‘if you didn’t knock him out or kill him, he would keep coming back again and again.’ ‘That hits the nail on the head!’ laughs Richie, who made his Exeter debut against Fylde in 1997.

‘As a young lad it was pleasing to know you had a few guys to look after you! Rob always led from the front with a “follow-me” attitude. You need that..’

The brothers played together countless times for Exeter, all over the country in three different leagues, both represented the Barbarians and played for the English Divisions XV in the 2000s against the World Cup winning Australians and South Africa.

But it was the humble trips they enjoyed the most.

‘We’d finish work on a Friday afternoon about three o’clock and would have to get to Middlemoor for the bus,’ remembers Richie.

‘Our front-rower Keith Brooking would normally order a Chinese and we’d have that delivered to the hotel!

‘We played Orrell away once. It all got a bit tasty. Bob Armstrong (a well-known Devon hard-man) lost some teeth, the crowd joined in and all sorts!

‘At Waterloo you had to walk out through the bar to get the pitch. You think now “Cor that was good”. We made sure we had a good bus trip home.

‘Plymouth, Penzance – some of those local derbies had the physicality of a Premiership game. 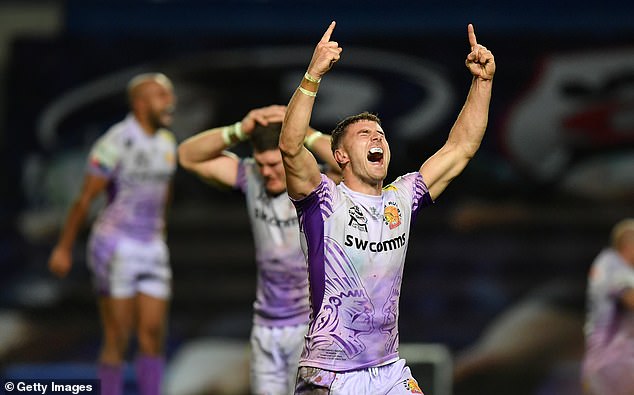 What Rob did not remember, though, was that day the Rotherham centre on a hot day at Clifton Lane was Lee Blackett – his coaching adversary in Saturday’s Premiership Final against Wasps.

‘There’s no better time than when you were a player even when you’re winning Heineken Cups,’ Rob reminisces.

‘It was an emotional day – the boots came off and they never came back on, even for training.

‘It just shows you how times goes by.’ Rob Baxter does not have much time to reminisce. Not when relentlessly driving his Chiefs forward.

‘No matter what the result this or last weekend we’re all incredibly proud of Rob’s achievements.

‘We’ll try and grab whatever time it is after this weekend for a reflection and a few beers in the garden.’

England can wait – in the Baxters’ eyes the foundation stones for an Exeter dynasty have only just been laid.

Covid: Tougher restriction begin for millions in England and Wales

Covid: Tougher restriction begin for millions in England and Wales