England fans going to Wembley told Bakerloo line will shut by 5.30pm because of staff self-isolating


England fans travelling on the Bakerloo line are told to get to Wembley by 5.30pm due to shortage of staff who are self-isolating – and trains will stop altogether at 7pm

By Shari Miller For Mailonline


Fans travelling to the Euro 2020 final have been warned there will be no trains running to Wembley Central tonight due to staff self-isolating.

In a statement, Transport for London (TfL) said the Bakerloo Line will stop running at  7pm on Sunday – just an hour before kickoff for England’s game against Italy – because of ‘a shortage of control centre staff who are having to self-isolate’.

TfL advises all travellers to complete their journey by 5.30pm. 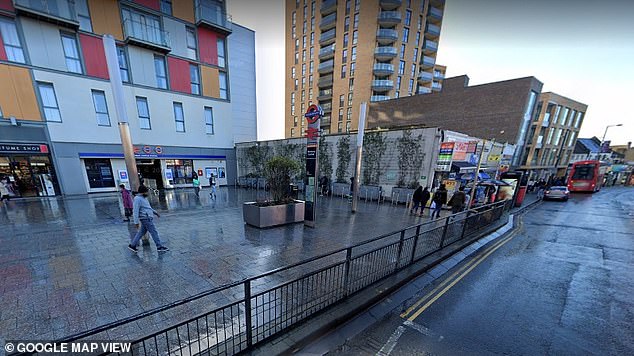 An estimated 60,000 fans will are expected to fill Wembley Stadium tonight.

Fans can use Wembley Park station instead, which is served by the Metropolitan and Jubilee Lines.

London Overground will stop at Wembley Central as normal, while Chiltern Railways will continue to operate to Wembley Stadium. 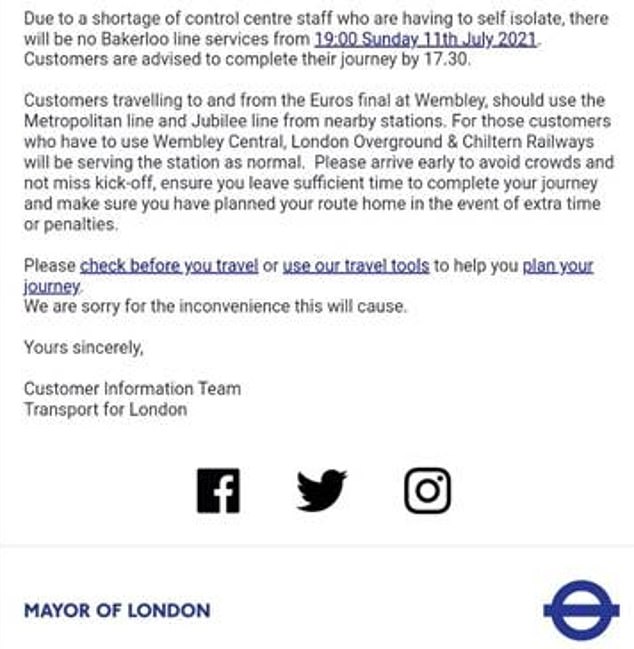 In a TfL statement, fans going to Wembley were warned over possible travel disruptions

The statement added: ‘Please arrive early to avoid crowds and not miss kick-off, ensure you leave sufficient time to complete your journey and make sure you have planned your route home in the event of extra time or penalties.’

Following the announcement, social media erupted over the issue, with some taking aim at Transport for London for not finding replacement staff in time.

Other users also exercised a healthy dose of humour and cynicism to discuss the matter on social media.

Tagging in Mayor of London Sadiq Khan, TheRealAlanPartridge wrote: ‘What a disgrace…The biggest day in London for years…Eyes of the world will be on us and you’re closing one of the main lines to and from Wembley (Bakerloo). Hang your head in shame..!!’

Similarly, Richard Brecker said: ‘England gets to its first major soccer final in 55 years and the Bakerloo line, one of the lines into Wembley Central Station, is suspended from 19hrs…If I was Mayor of London I’d make sure that replacement control staff were found in time to ensure smooth running.’

JEFF POWELL: Farce is too kind a word for the VAR catastrophe – football risks ruin

The Netherlands imposes a 5-week lockdown to confront Corona